The Public Crucifixion of Paul Deen 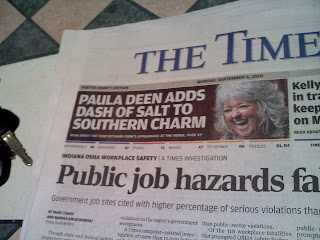 I posted a few days ago about Paula Deen's situation.  I tried to talk about both sides of the issue, but at this point I have gotten pretty upset.  Since I last posted she was fired from her TV show and even her local restaurant in Cherokee, NC is set to close over the incident.  Now I obviously don't know what Miss Deen is like personally, but it is clear to me that the punishment here does not fit the crime.

Under deposition Paula Deen admitted to having used racist language in the past.  It would have been easy for Deen to simply lie and say that she never did these things.  She chose to be honest and said things that could be harmful to her in the future.  Deen showed integrity in her honesty and by admitting she was not perfect.  I for one can say that I have said things I am not proud of, and I have definitely said things that I would not want published in a newspaper.

Words are powerful and Miss Deen said a very hurtful word.  This was several decades ago, when that word was thrown around a lot more casually. That said, she used the word to describe a man that had threatened her life.  Isn't it quite possible that Miss Deen has grown.  As a nation, we have grown and shifted to a place where we realize this is not appropriate.  For some reason we are assuming that Miss Deen has not grown with the rest of the country.  Strom Thurmond actively fought against civil rights, yet he was allowed to stay a respected member of congress until 2003!  Yet, Paula Deen makes some off hand remarks in her personal life and she is supposed to go away forever.  This seems like an odd double standard.

Recently another interesting accusation has been leveled against Miss Deen.  There has been criticism that she has failed to give African Americans credit for their role in the history of the food she creates.  Does Paula Deen's food have huge African American influence?  Absolutely.  The majority of African Americans can trace their heritage back to the Southern United States for obvious reasons.  The fact of the matter is the black and white southerns have a shared culinary history.  What is considered traditional "Black Food" is essentially the same thing that is traditionally eaten by Southern Whites.  My wife was raised in the South by her grandparents and grew up eating what would be considered "Soul Food".  Southerners of all colors played a role in their creation of modern Southern Cuisine. I don't ever remember Paula Deen ever marketing her food as "White Food".

I feel like she has gotten a raw deal.  What could have been a starting point for a reasonable discussion was instead turned into a public crucifixion.