Everyone knows that Key West is the Southern most city in the United States, but few realize that its also the creepiest.  On the outside Key West appears to be one of the most beautiful and laid back places in the country.  One would think it was an island composed entirely of Jimmy Buffet songs.  Upon arrival, you may not feel that is too far off.  People in sandals, outdoor drinking and pristine beaches.  It seems like paradise on earth. 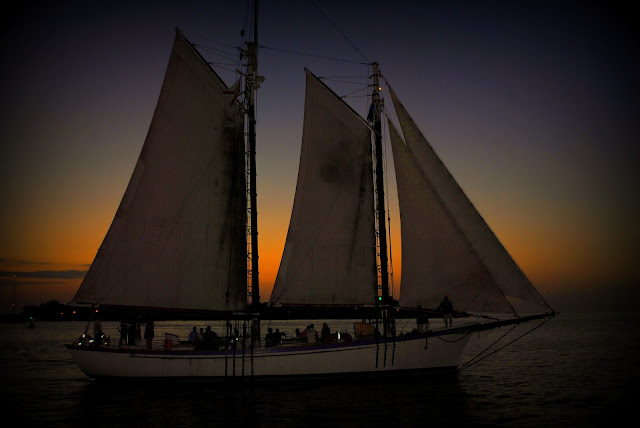 But after you peel back the layers of sunshine and smiles you will find a core of pure evil.

Let's start with the oldest bar in Florida, and possibly the Country:  Captain Tony's.

Captain Tony's is a laid back relaxed island bar and has been mentioned in Jimmy Buffet songs, but you will immediately notice a few things that are a little "off".  Such as grave stones planted into the floor. 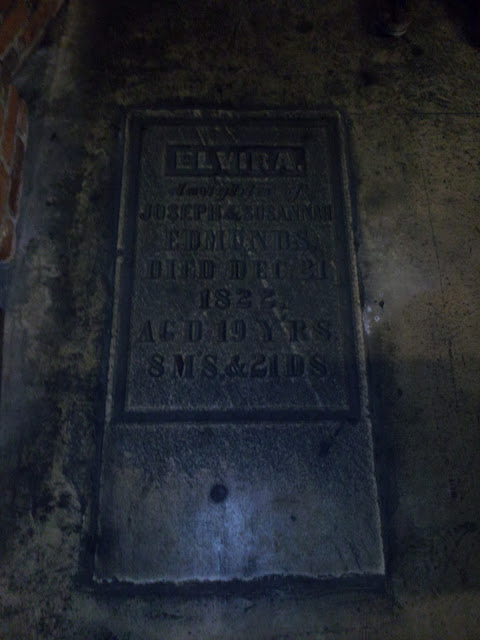 It is said that little Elvira is actually buried there.  The building used to serve as the city's morgue and the mortician had his baby daughter buried there.  Now it is a dead baby buried in a bar, for drunks to trample and spill drinks on.

This isn't the only grave planted at Captain Tony's. 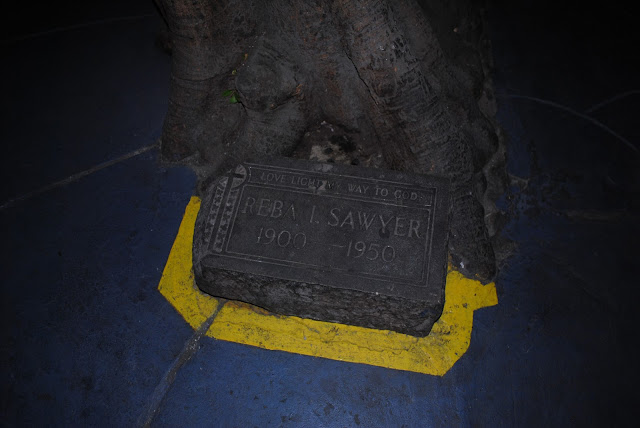 The legend here is that old Reba Sawyer was cheating on her husband, having randevous at Captain Tony's.   When her husband found out that his wife had been cheating he took her grave and threw it through the window of the bar, where it sits to this day.  They have conveniently painted yellow lines around it to keep drunks from stubbing their toes.

Right next to Reba's grave is another oddity. 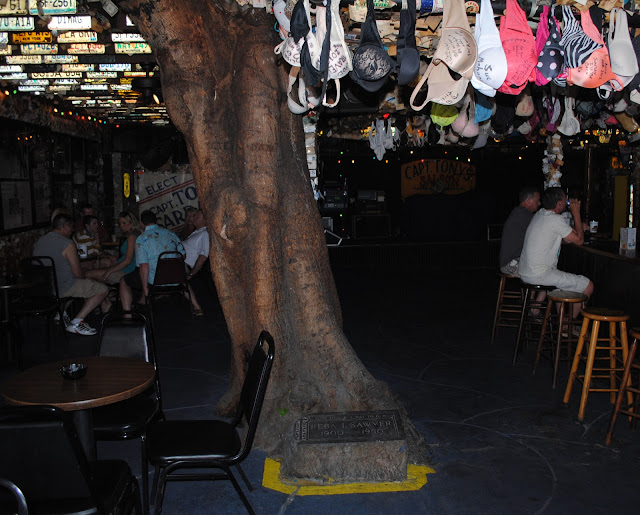 Yes, that is a tree.  A tree in a bar.  Normally that would be strange enough, but not in Key West.  That is a hanging tree.  Before the bar was built the tree was used to execute criminals on the island.  I guess when they built the bar the locals were too fond of it to chop it down.  Now it sits surrounded by hanging bras, instead of hanging corpses.

We'll finish off our trip to Captain Tony's with a look at the good Captain's prized shrunken heads. 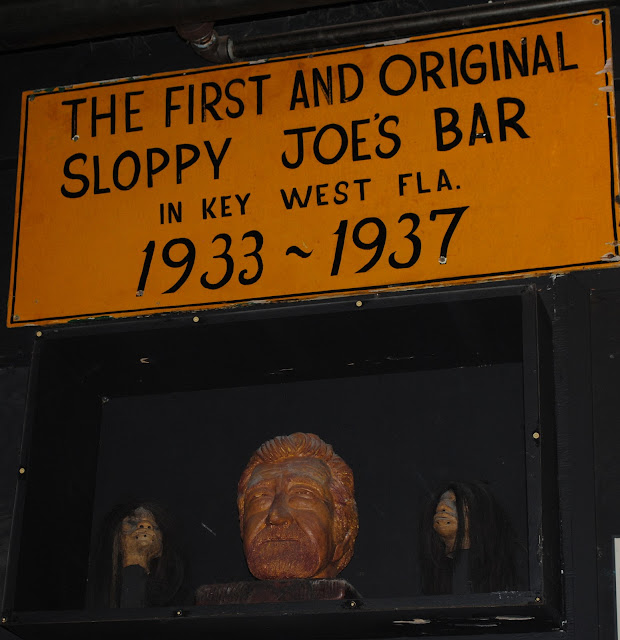 Of course Captain Tony's isn't the only place to find odd tombstones.  A short jaunt over to the Key West Cemetery you will find one of the quirkiest graves in America. 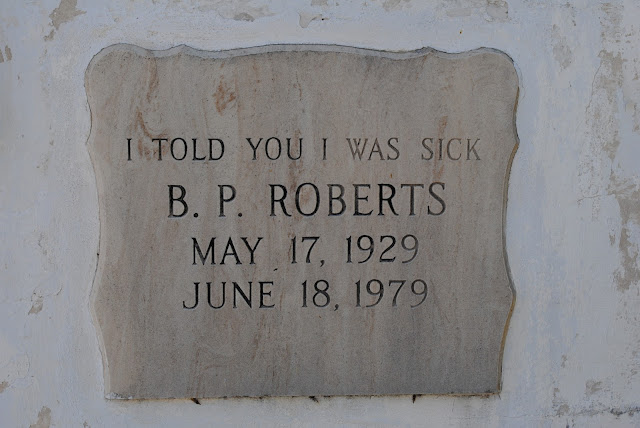 Now, I am not that big on ghost stories, but I am a fan of demonically possessed dolls.  Meet Robert the Doll. 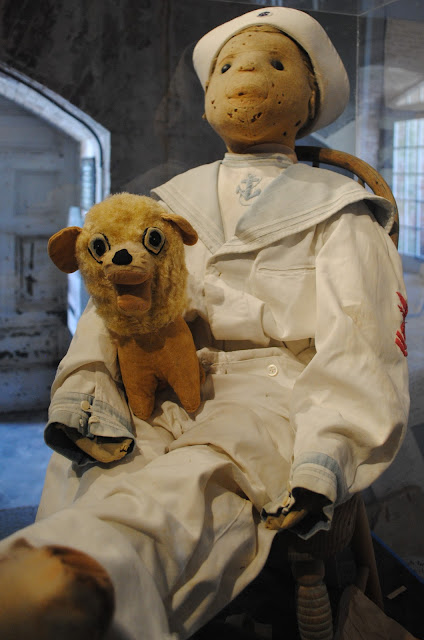 Robert is more then a creepy doll.  It is an accepted fact on the island that Robert is possessed.  Robert was a gift from a Caribbean house servant to a young boy named Robert.  Robert uncreativly  named the doll after himself.  When the family had a falling out with the house servant strange things began happening.  People reported hearing the boy having conversations with Robert, who spoke in a different voice.  When the boy was accused of doing bad things he would always claim "Robert did it".

Neighbors would report seeing Robert moving around and looking out various windows As Robert the Child grew up into an adult he began going by the name of Eugene and gave his name to the doll, which he kept and gave him his own room with miniature furniture.  He reportedly became enraged at his wife when she called him Robert, insisting that Robert was the doll and he was Eugene.   When Eugene died Robert he was left in his room for future home owners to deal with.  Creepy things kept being reported, including a few incidents when Robert went full-Chucky and straight up attacked people.  Robert now sits in a museum, where he receives massive amounts of fan mail from people asking for Robert's magical assistance.  It is supposedly bad luck to take Robert's picture without permission.  So far he hasn't hunted me down.

One would think Robert would be the creepiest thing on the island, but he is not.  The creepiness crown goes to Count Cosel.

Count Cosel was a radiologist from Germany who came to work in Key West.  The Count begin working with a young tuberculosis patient named Maria Hoyos.  The Count grew obsessed with Hoyos, even though she was married to another man.  The Count often gave her gifts, but she never reciprocated.  When Maria finally succumbed to tuberculosis the Count contacted her grieving family and agreed to pay for the burial and had an above ground mausoleum built.  This was a setup, as the Count used this an opportunity to steal Maria's corpse and take it home with him.  He would live with the corpse of Maria Hoyos for 7 years treating it as his wife. 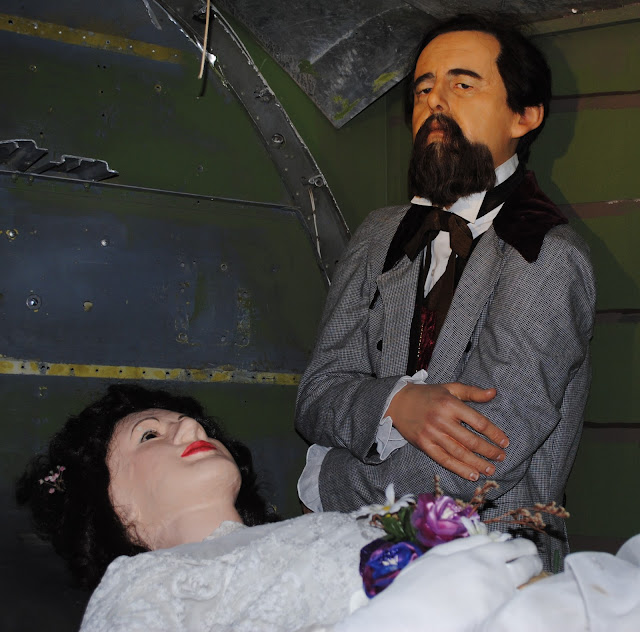 As her body began to rot and decompose he would repair it with wire, plastic of paris, and stuffed it full of rags.  He would also douse it in liberal amounts of oils and perfumes to keep it from stinking.  Neighbors reported to Maria's family that the Baron was seen dancing with what appeared to be a giant doll.  When Maria's grave was found to be empty, the Count's house was raided and Maria's corpse was found. 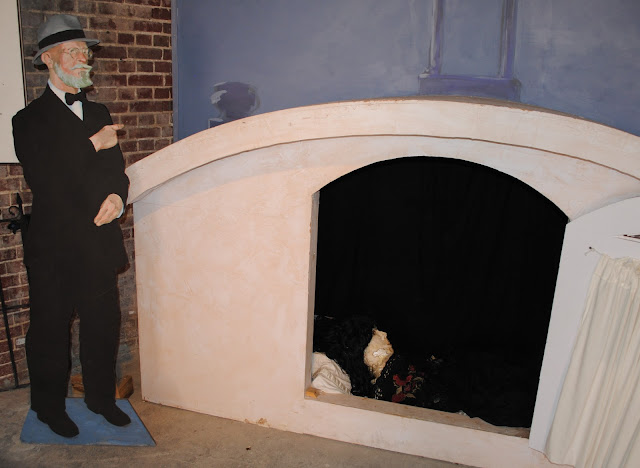 The Count was tried, but ended up getting off on a technicality.  At the end of the trial he audaciously asked the judge if return Maria's body to him.  His request was denied. 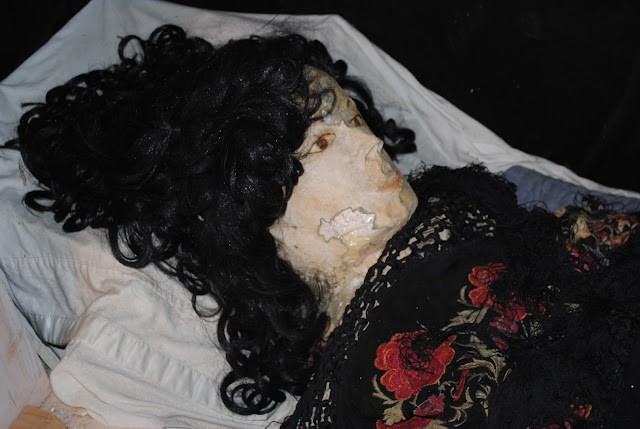 Before leaving the island in shame the Count strapped Maria's mausoleum with dynamite and blew it up.

When the Count died years later it was found that he had reconstructed a life size doll of Maria that he had continued living with as his wife.  Controversy still surrounds the second doll, as some believe that the original Maria that was found was the fake and the doll he had at his death was the actual Maria.


The Carpetbagger
Please feel free to e-mail me at jacobthecarpetbagger@gmail.com
and check out my Flickr Photostream