Could there be two more enticing words in the English language?

When I found out that this was a thing, I become fixated on witnessing this spectacle.  My wife found that there would actually be one a few miles down the road.

Last night we finally got to experience the Monkey Rodeo in all its glory. This is Tim Leopard.  He is a former rodeo performer.  He leads a troupe of Monkey Cowboys known as "Team Ghost Rider".  In Tim's biography on his web site he describes himself as a "Bullfighter".  This confused me a bit, as I was pretty sure Bullfighting is illegal in the United States.  After doing research I found that "Bullfighter" is actually the politically correct name for  "Rodeo Clown".  So he was not a matador, but a Rodeo Clown.  Although, I believe that anyone that runs from angry bulls for a living can be called whatever they want.

Here is "Sam", a 20 year old Capuchian Monkey who has been performing for 17 years. 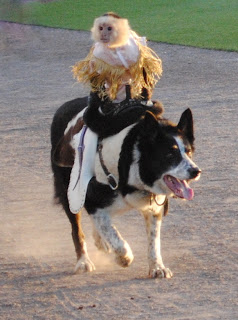 At the end of the performance. Tim got down on one knee and told the story of "a little boy who's dream was to own a monkey", encouraging everyone to follow their dreams.  He then declared  "I am not a republican, I am not a democrat, I am an American and it is time to bring God back to America!"  And with that, one of the most inexplicable things I have ever seen seen was over.


Oh yeah, there also some sort of sports game going on......

The Carpetbagger
Please feel free to e-mail me at jacobthecarpetbagger@gmail.com
and check out my Flickr Photostream
Posted by Jacob at 5:08 PM