The South Carolina Capital building (possibly the most controversial capital building in the country) has a statue of a single man out in front.  This man is Strom Thurmond. 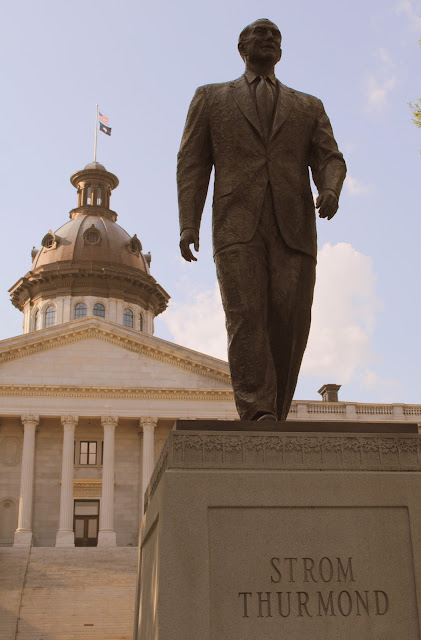 Where do you begin when talking about Strom Thurmond?  He is a man who in most people's eyes embodies the segregationist movement.  The movement that believed that whites and blacks should be legally mandated to live separately.  That is pretty damn racist.  Strom was so dedicated to the segregationist cause that he engaged in the longest filibuster in history to try to block the the Civil Rights Act of 1957.  Strom would ramble on for over 24 hours going onto wild tangents including reciting his grandmother's biscuit recipe.

Stromr begin his term in the US senate in 1956.  Luckily, it was realized that he was a man from another time and when the country finally came to a consensus that segregation was evil, he was booted from office.  Just kidding, he served until 2003 and ended his term as the longest serving senator in US history.

When he died he eulogy was given by Senator.  Joe Biden, who you may know as being the the vice president serving under America's first African-American President.

Strom's positions did gravitate to a more moderate mainstream position overtime, but he never truly denounced his past actions.  For whatever reason he was allowed to remain in the senate for almost half a century.  In an odd twist, Senator Trent Lott was forced out of office for saying that Strom should have been president.  This confused me.  Its okay for Mr. Racism, Strom Thrumond to stay in office forever, but if you publicly say you like him, you risk being forced out of office.

When Strom died in 2003 you would this this long complex journey would be over.  It was only just beginning.

Essie Mae was Strom's half-black daughter.  Essie Mae was conceived through the wonders of statutory rape, when Strom impregnated a 15 year old black girl who was working for his family.  One would think that the principles of segregation would forbid one from having sex with people of another race.

Essie Mae would not "come out" as Strom's daughter until after Strom's death.  Strom supported her financially in secret in exchange for her secrecy.  In a somewhat strange twist, the two actually had a relationship and kept in contact over the years.  Essie Mae would try to change her father's opinions on segregation, but her father reportedly brushed her off. 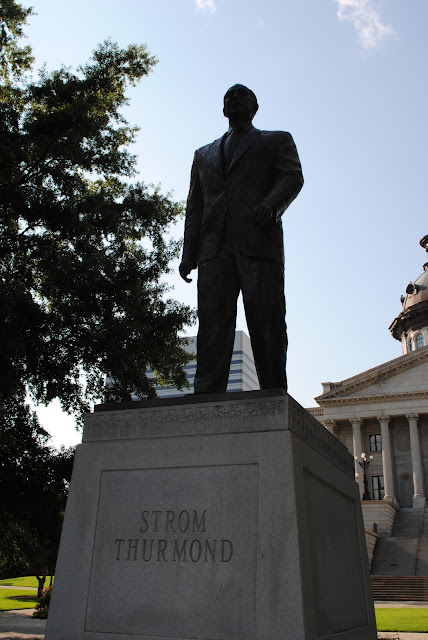 After Essie Mae came out of the shadows Strom's statue was modified.  The base had contained a list of Strom's children.  It would be modified to include Essie Mae.

You can see how the word "five" was crudely placed over the word "four".

Essie Mae died on Monday, thus ending one of the strangest parables of race in American History.