The Giant Crosses of James Potter

Here at the Carpetbagger we have talked of several men who have traveled the roads of this country planting crosses as a display of their beliefs.

Perhaps the most prolific of these was Rev. Bernard Coffindaffer, who is known for planting groups of three crosses: one gold and two blue.  They can be found all over the country.

The second man, Harrison Mayes, was a Kentucky coal miner who was injured in a mining accident and promised God that he would spread his word if he spared him.  Harrison would construct concrete crosses and plant them on other people's property without permission.  He was quite eccentric, living in a giant cross himself, and leaving instructions after his death to plant the crosses on other planets. 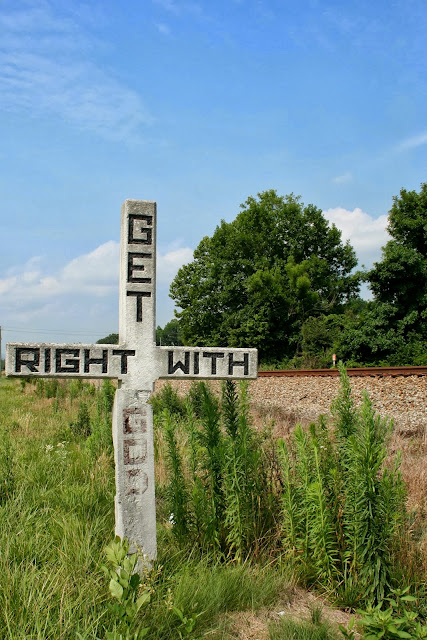 This man may not be as eccentric as Mr. Mayes or as prolific as Mr. Coffindaffer, but he makes up for it a very important way:  Size.

This is James Potter, not to be confused with Harry Potter's dad.

If you have done a bit of traveling across the bible belt or Midwest you have likely seen his work.

Potter, who owns his own lucrative construction business, has created nearly thirty of these massive monuments along the highways.  They range from 100 feet to the largest: The 198 foot World's Largest Cross in Effingham, IL.  The cost ranges from $500,000 to over a Million.  The price is usually covered by local churches.  There is something to be said about spending this level of money on constructing religious imagery, but let's not get into that right now.  Let's just enjoy the sheer massiveness of these crosses.


The sheer size of these crosses grab your attention as they plunge forth above the horizon.

Of note is the towering cross hovering over the Southern City of Sin Pigeon Forge, TN.  Gazing down at the miniature golf stores and beef jerky outlets.

Perhaps most notorious is the cross he had erected along I-75 near Royal Blue, TN.  This giant cross just so happens to fall next to a giant pornography store named adult world, disrupting weary truckers.

James Potter shows no signs of slowing down as these crosses continue to pop up.  James Potter also pops up in Alexandra Pelosi's "Friends of God" documentary.