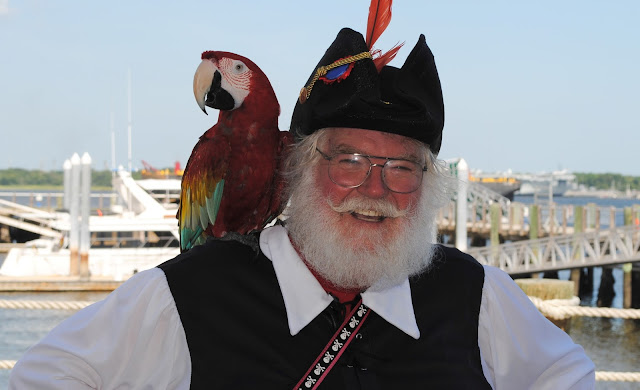 Here in the Carolina Mountains we have one iconic image: The Hillbilly. 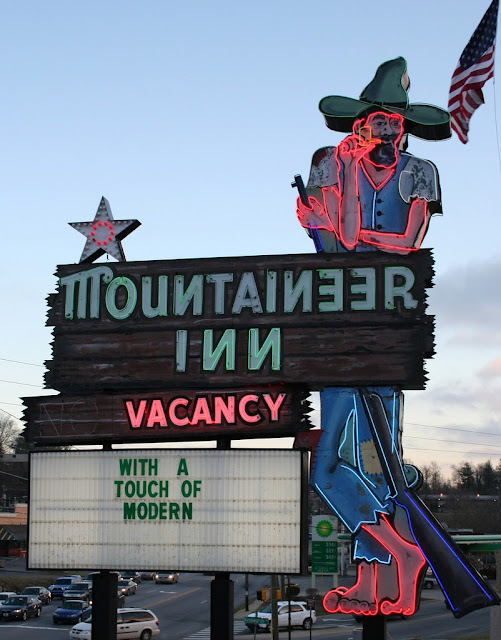 On the Carolina Coast, they don't have hillbillies, so they must find an alternate mascot. 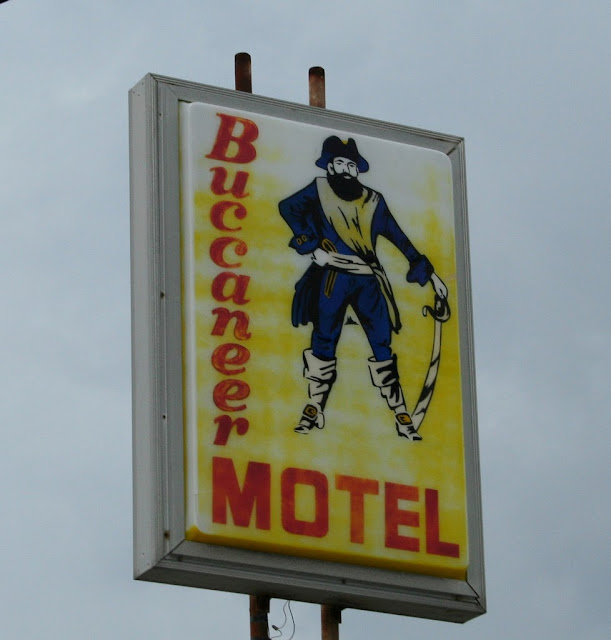 Pirates!  In some ways pirates are the Hillbillies of the Seas.  Like Hillbillies, Pirates live in areas inhospitable to normal people.  They don't ask for anything from of the government, they simply take what they need.  They don't shave and they don't baths.

Pirates are awesome, there is no arguing that fact.  Here in the Carolinas the pirate is Blackbeard.

I like to think of Blackbeard as the original Pro Wrestler.   Blackbeard wasn't the most viscous pirate, he wasn't the most equipped pirate, he was simply the scariest pirate.   Blackbeard was a big fan of theatrics and made himself out to be the most over the top super villain.  He would literally light his beard on fire as he approached ships as a way to convince people he was Satan.  His pirate flag, was a subtle image of the Devil driving a spear through a heart. 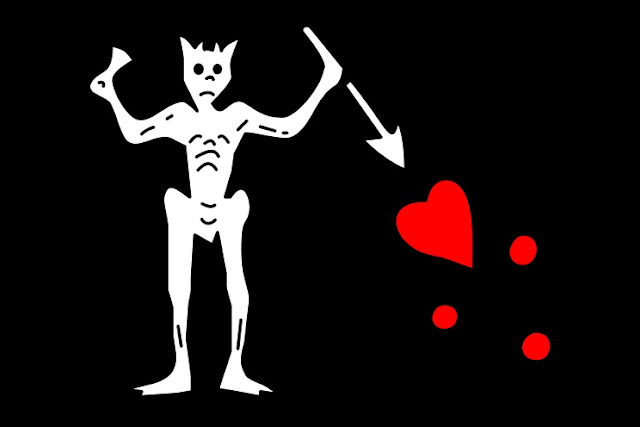 Blackbeard did everything in his power to perpetuate the myths that surrounded him, so much so that they exist to this day.   As Blackbeard's piratey career was winding down he settled down in North Carolina, where the governor was known to be pirate friendly.  This didn't sit well with the no good scoundrel, Governor Spotswood of Virginia, which sent a fleet to take out Blackbeard and his drunken pirate brethren. 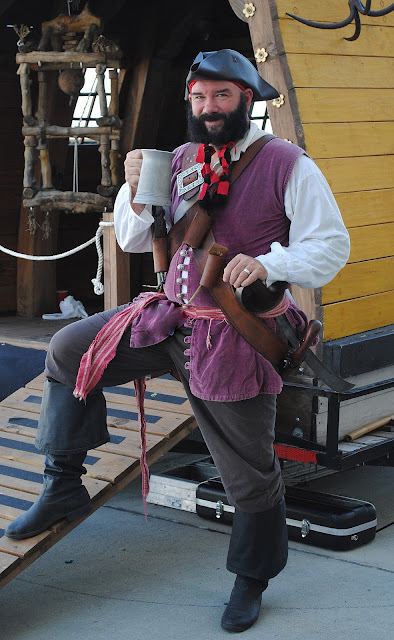 Blackbeard's epic last stand actually lends some credence to his frightening reputation.  He was stabbed 20 times and shot 5 before finally dieing.  They finally chopped his head off and threw his body into the ocean, where legend has it his body swam an entire lap around the ship.  His head was brought back to Spotswood as a gruesome trophy.

Next we take a look at one of Blackbeards partners, Stede Bonnett, the Gentleman pirate.

Stede was unlike any other pirate.  While most pirates were poor men that set out to make a living, Stede was already a very wealthy plantation owner.   Stede however had a midlife crisis and grew sick of his nagging wife.  Stede went and bought a pirate ship and a crew and set off to go pirating.  I imagine a lot of us have this same dream, but only Stede had the guts to go out and do it.

The thing was that the pirates life wasn't as easy as the foppish landowner had imagined.  He knew absolutely nothing about pirating or sailing and was soon seriously injured.  He would wind up meeting with Blackbeard and giving control of his crew and ship over to the more experienced pirate.  The two would become pirating partners.   I have to imagine that if reality shows were around in the 1700s, the odd couple pairing of the prim and proper Stede Bonnet with the grizzled and surly Blackbeard would be pure comic gold.

Even after receiving a royal pardon Stede could not give up the pirates life and ended up getting hung in Charleston, SC for his crimes.

Of course no discussion on pirates would be complete without the tale of Anne Bonny and Mary Read.

Anne Bonny was a plantation owner's daughter with a thing for bad boys.  She disgraced her family when she ran off and married notorious pirate "Calico" Jack Ratham.  Anne was one tough woman and essentially served as co-captain of Calico Jack's ship.  Ann's life would change as another female pirate entered her life: Mary Read.   Mary had been a cross dresser all her life.  Her mother had raised her as a male in a scheme to trick her grandfather into giving  them an inheritance.  Mary had fought in the navy as a male.  When he ship was captured by Calico Jack she became a member of his crew, still in the guise of a man.  Anne took quite a shine to young Mary and attempted to seduce her/him.  Mary revealed to Anne that she was a woman.   It is unknown if their relationship continued after Mary's true gender was revealed, but you can come to your own conclusion (or write your own creepy pirate fan fiction).   Calico Jack found out about Anne's fondness for Mary and threatened to kill her until she revealed herself as a woman.  Mary and Anne become close friends and operated the ship by the side of Jack, which was surely one of the most unusual pirate bands of the time.

All things were going well with this pirate love triangle until one fateful night when they were attacked by a British naval ship.  Jack and the male members of the crew were all passed out drunk.  When he was awoken by Anne and Mary he was against fighting as he felt that they had no chance of defeating the British ship.  Anne and Mary tried to defend the ship, but apparently two girls couldn't stand up to the British Navy and they were captured.

Calico Jack was put to death.  When he was allowed a final meeting with his wife, Anne said to him "If you would have fought like a man, you wouldn't be hanging like a dog."  Youch!

Anne and Mary were both sentenced to death, but revealed to the authorities that they were both pregnant.  It was against the law to hang a pregnant woman and they were both pardoned.  As a side note, it was likely that Calico Jack was the father of both babies.   Sadly, Mary died during child birth.  Anne quietly vanished and it is believed that her father bought her freedom and she returned home.

Here is me with Anne Bonny and Mary Read..... 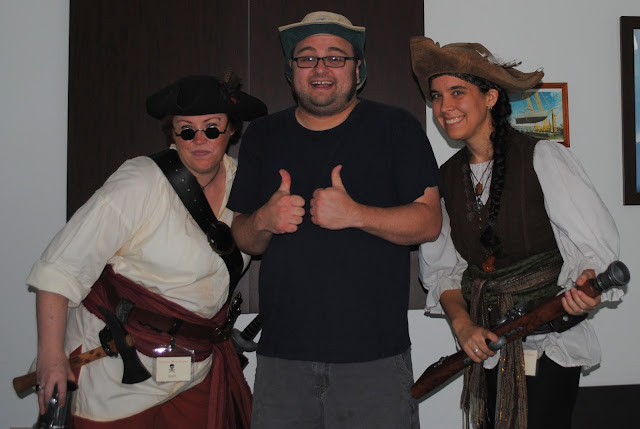 I have come across other pirates in my travels, such as this creepy anamatronic pirate seen at "The Pirate House" restaurant in Savannah, GA. 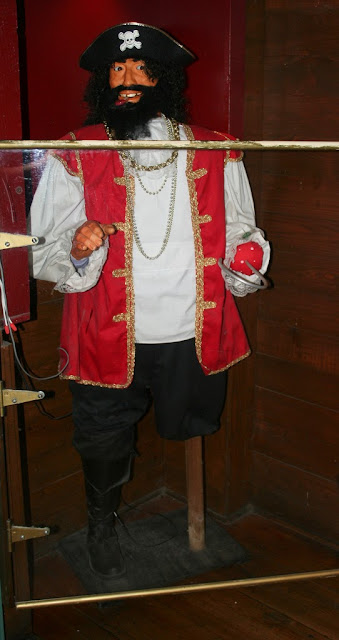 Complete with his own sneeze guard.  When you hit a button he would jerk around and roll his eyes back and forth as a disembodied voice talked about the ghosts that allegedly haunt the restaurant.  Sadly, the next time I visited the restaurant he was gone.

Years later in Ft. Meyers, FL at The Shell Factory tourist attraction I ran into a familiar animatron 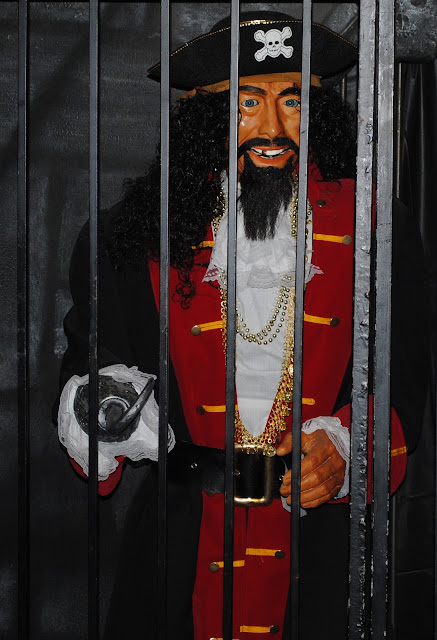 He looked suspiciously like my old friend from Savannah.  I hit his button and he launched into his diatribe about the Pirate House Restaurant.  It turns out he was the same figure with a bit of a makeover.  They hadn't bothered to change his spiel.

I would like to wish everyone a happy International Talk Like a Pirate Day from the Carpetbagger.

Please feel free to email me at jacobthecarpetbagger@gmail.com
And don't forget to check out my Flickr Photostream
Posted by Jacob at 9:57 PM