Recently I went to the local fair and witnessed an awesome alligator wrestler named Kachunga.  His alligator wrestling show was very impressive and seemed just a touch more dangerous then the average show.  He had a more wild approach to gator wrangling, unlike the more structured wrestling you usually see. 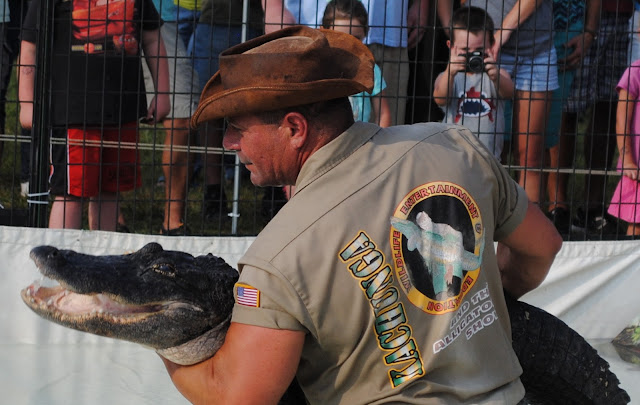 While looking for alligator wrestling videos on youtube I found TWO separate videos of Kachunga being bitten during his shows.

Speaking of insanely dangerous situations to put yourself in, check out this country girl riding an alligator in a pond full of alligator.  It seems that they forgot to tell her alligators were dangerous.


Did you know that there that there people pushing to make Alligator wrestling a true professional sport?  There is an organization known as the Freestyle Alligator Wrestling Competition or FAWC.

They have a championship in Tampa Florida and it looks like one of the most amazing events one could imagine.  Take a look at this video.  Its essentially an alligator rodeo and the tricks are insane and dangerous.  Not to mention, oddly beautiful.


You may have heard the announce mention that Johnny there is also a rapper.  Here is his alligator wrestling theme video under his rap name "Jonny Cobbler".


For those of you who can't get enough of people getting bit by alligators (sickos), here's another great alligator-bites-trainer video.


First of all, its adorable how all the alligators line up like hungry puppies to get fed.  Second, its hilarious how the guy tries to act like nothing just happened and just casually says "shows over" as he walks off.

Then there is this crazy bastard that tries to walk of a gator bite to the head.,


Then we have this North Carolina scientist getting in way in over his head and showing the worst possible way to wrestle an alligator.


He worked at a local aquarium, which I guess made him feel that this gave him the credentials to single handedly subdue Alligator three times as big as him.  His technique apparently involves throwing a towel over its head and then tepidly touching its shoulders.

Keep in mind with all these gator attacks that an alligators mouth is full of rotten bacteria and it will get infected and make your limb (or head) rot off.  In the wild Alligators can bite and animal then follow it around until it dies of disease.

All this is getting a bit grim, so let's end thing with kittens.  Here is a video of a house cat bravely fighting off two alligators.