When I first started taking pictures one of my favorite thing to photograph was old cemeteries.   I spent more time in cemeteries the most funeral directors, trying to get good pictures. 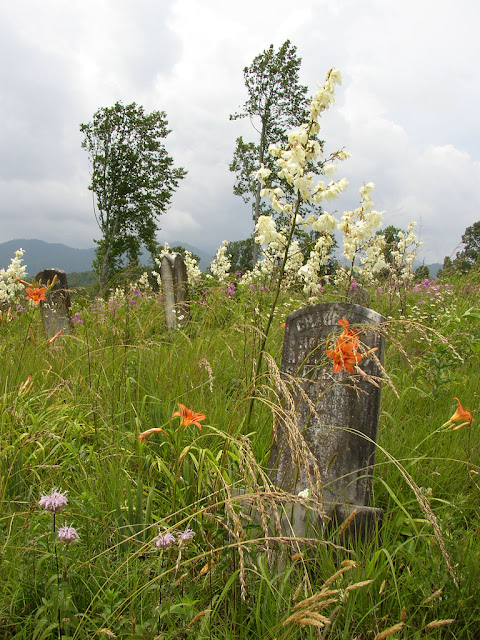 I have expanded my interests considerably since that time, but I wanted to take a minute to look through some of my old grave photos.

I was always interested in some of the homemade grave stones I came across.   Appalachia is a traditionally poor region.  People were often forced to use the own ingenuity when it came to crafting grave markers. 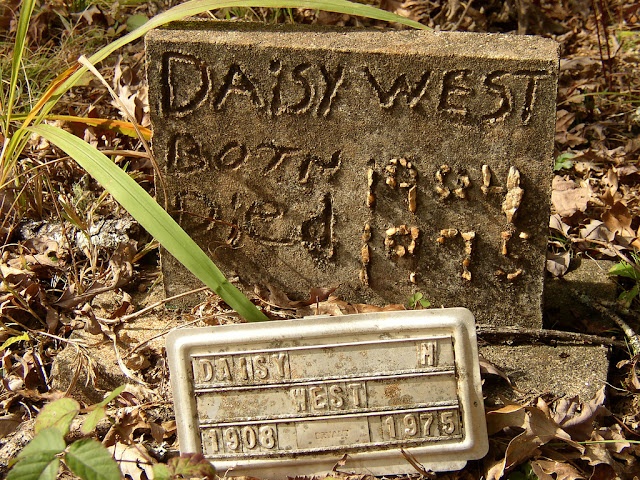 This handmade stone was always on of my favorites.   Also interesting, is the discrepancy between the birth dates on the stone and the metal marker.  This was found in an African American cemetery in Franklin, NC 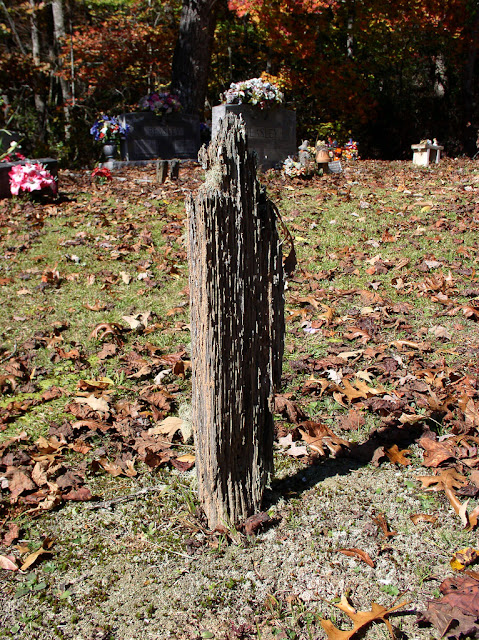 Above is something that is understandably rare:  A wooden gravestone.   For those who could not afford a grave marker this would have to make do.  Sadly this "stone" had no decipherable markings left and looked so brittle that a stiff wind would blow it over.   I'm sure that at one time wooden grave markers weren't uncommon, but they are probably all gone at this point. 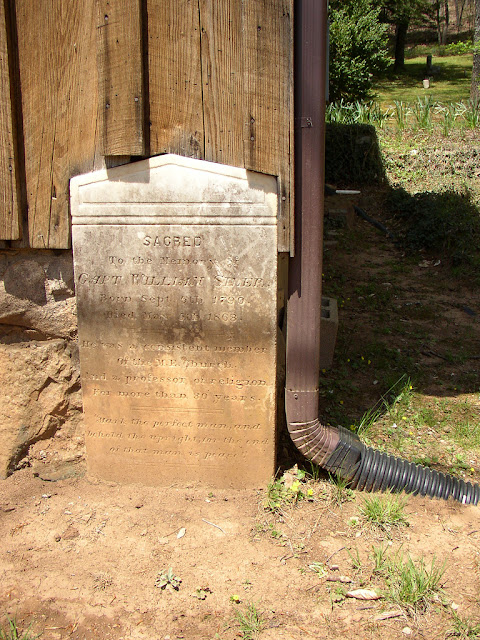 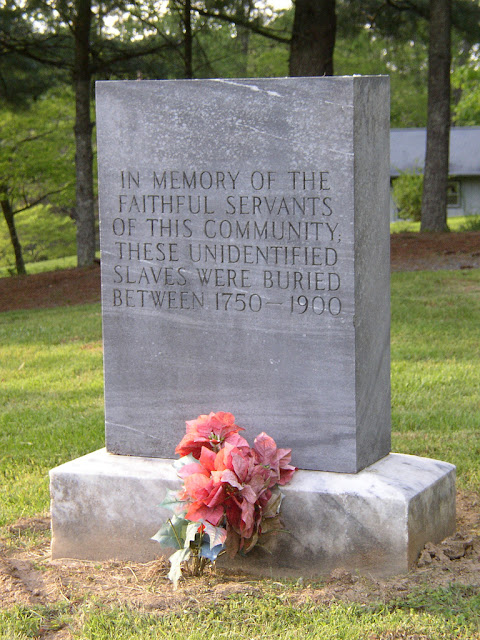 This one always makes me sad.  The back corner of this cemetery in Otto, NC is empty of graves stones, but full of strange sunken areas.  This marker explains why.  Slaves were buried here in unmarked graves.  A tribute to the inhumanity that was slavery.  Something about the words "Faithful Servants" is a little off putting when you consider that the slaves didn't really have a choice in how "faithful" they were. 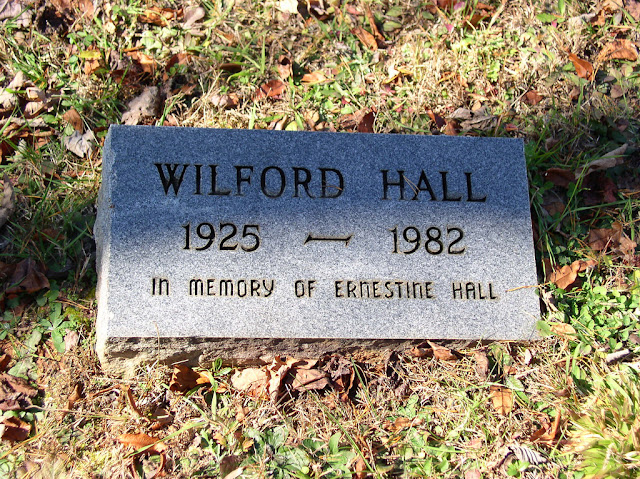 This is found in the same graveyard as Daisy West.  It always struck me as strange that it is Wilford Hall's gravestone, yet it is "in memory of Ernestine Hall".   I'm really not sure what it means. 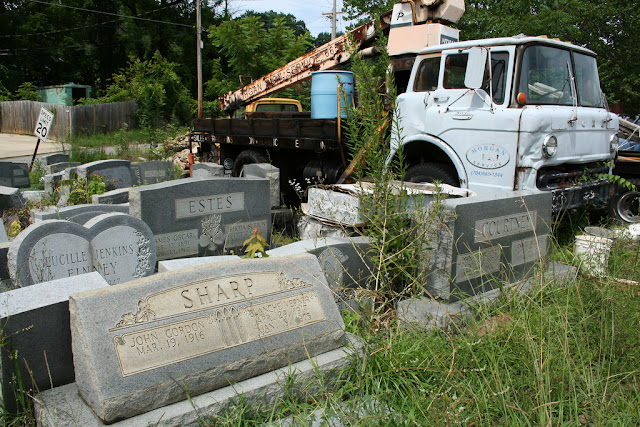 What you see above is not a graveyard, its an empty lot piled with gravestones in Waynesville, NC.   What makes it a little unsettling is that all the stones have names on them.  This is the result of people having gravestones comissioned and then being unable to pay for them.  Kinda of sad when you think about these poor decisions being made under the influence of intense loss and sadness. 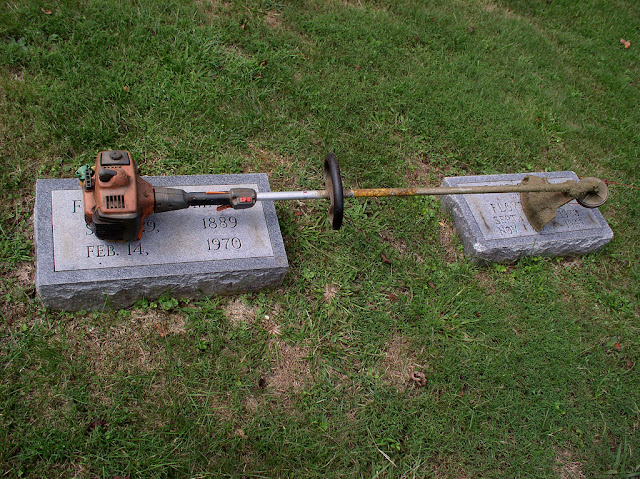 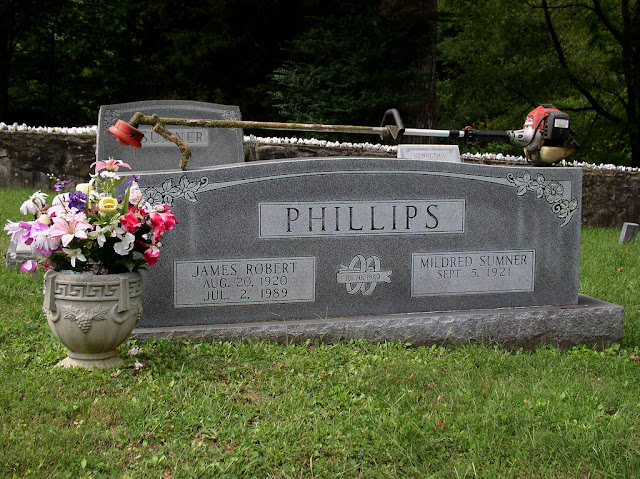 I took the two above pictures in a cemetery in Sylva, NC.  There was a guy there mowing the lawn.  I found it a little interesting that he felt the need to set his weed eaters down on people's graves.  Would it have been that bad to just set them in the grass? 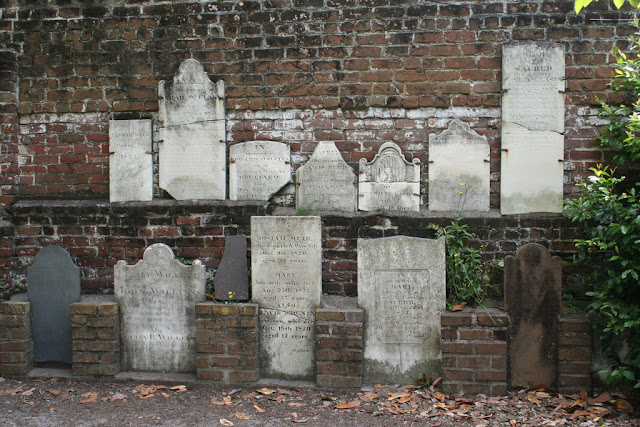 The city of Savannah, GA faced a problem as they begin to expand.  They had to many cemeteries.  With the need for the city to modernize and grow the decision had to made to start flattening cemeteries and building new buildings right on top of them.  Basically, this is the plot of "Poltergeist", except its a whole city instead of one house.   This wall shows where some of the old stones were saved.   The bodies they used to accompany are buried under some yogurt shop. 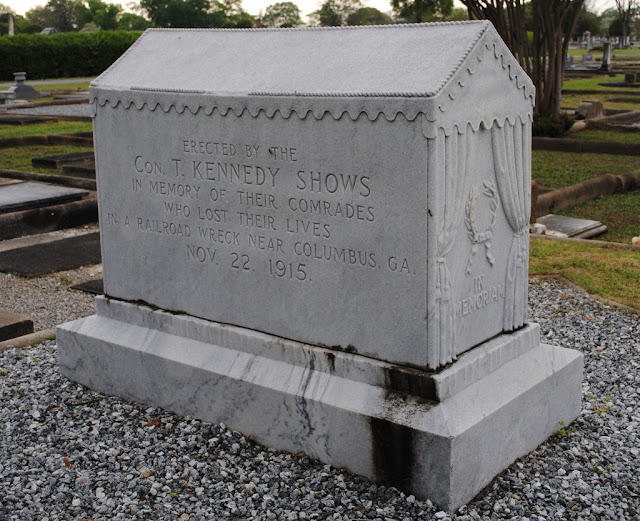 Here is a marker in Columbus, GA commemorating a horrific circus train wreck.  I don't know if there are any actual performers or elephants buried here. 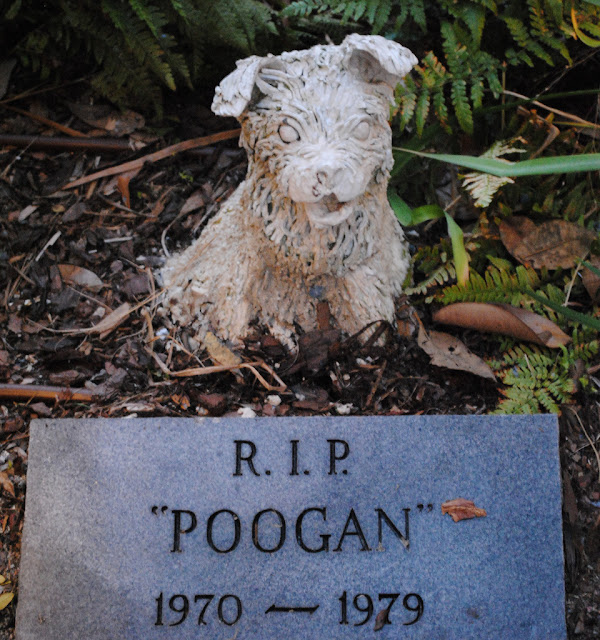 This is the grave of Poogan in Charleston, SC.  Poogan is said to have become a ghost dog and haunts the property this grave is found on.  It is currently a restaurant named "Poogan's Porch", which may be the only restaurant named after a Ghost Dog.

Speaking of dogs, I found this pet cemetery outside of Nashville, TN.   I am an animal lover and totally understand why people would want a monument to their pets, but what makes pet cemeteries interesting, is that Animals tend to have names you don't normally see on gravestones. 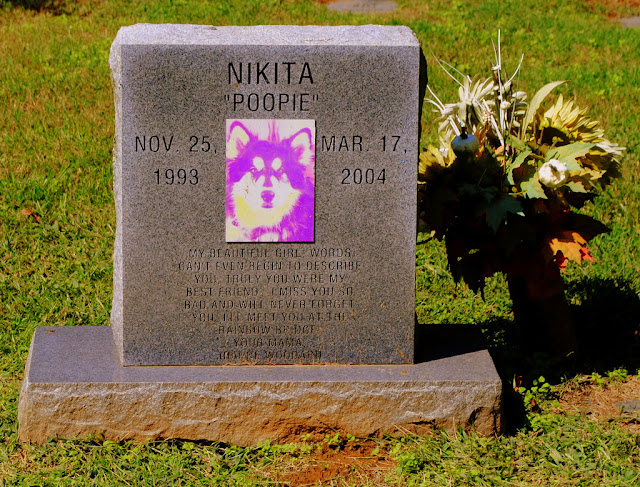 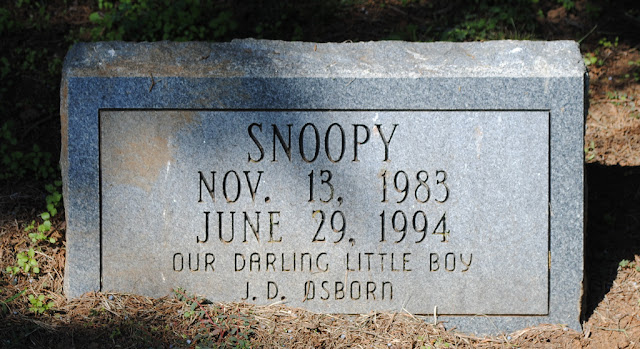 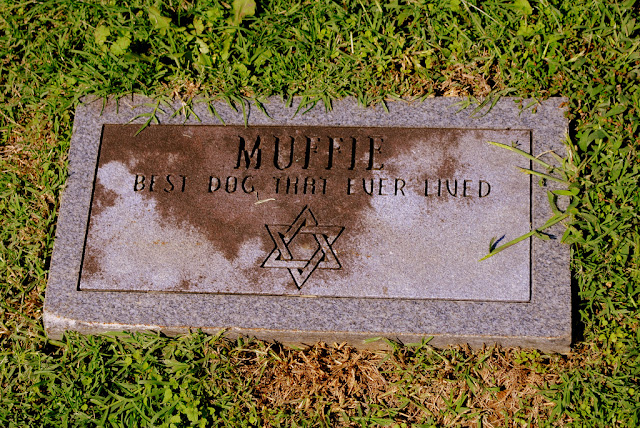 In Key West, FL are some of the most notoriously zany gravestones.  Including this woman who dedicated her life to Julio Eglesias 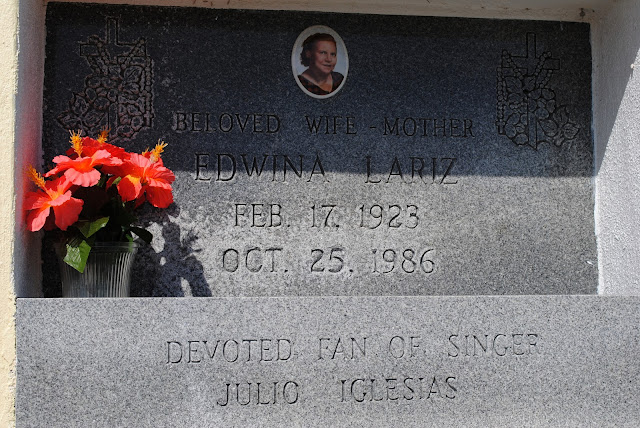 And then, possibly the most well known zany tombstone in America. 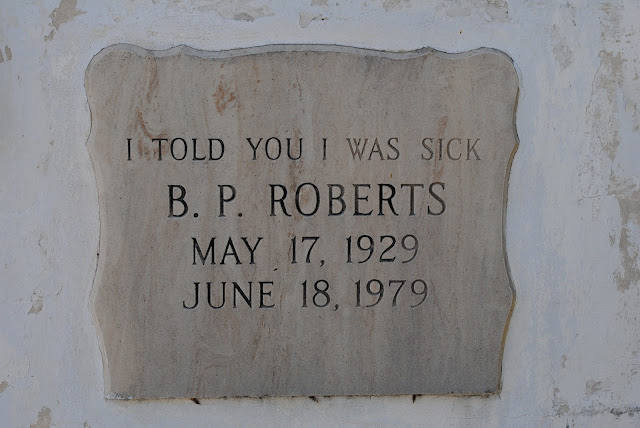 Nearby another grave pays homage. 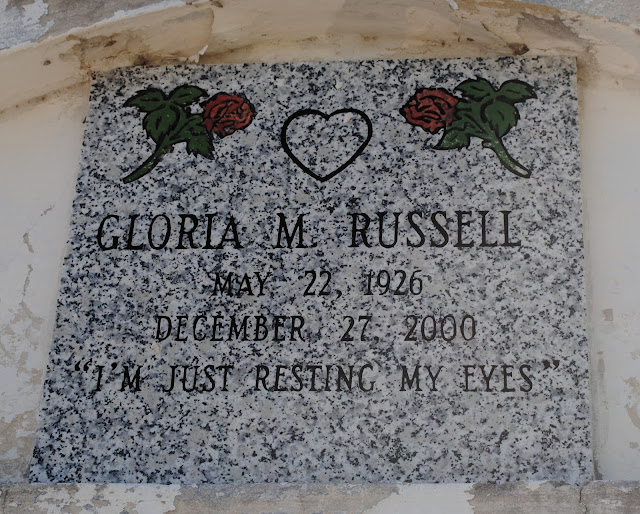 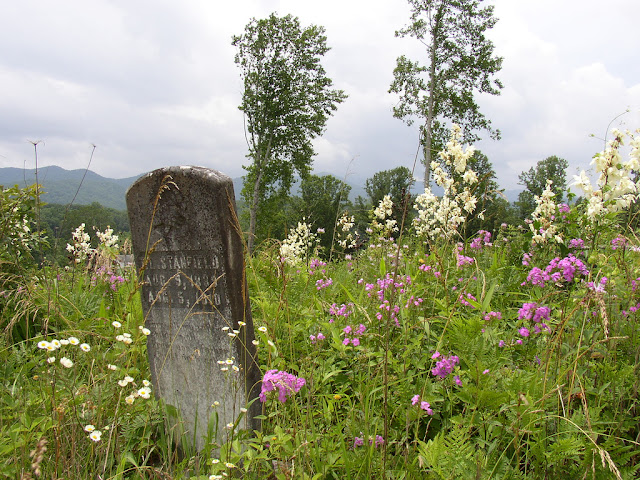 Please feel free to email me at jacobthecarpetbagger@gmail.com
And don't forget to check out my Flickr Photostream
Posted by Jacob at 11:56 PM