I have talked a lot about Pigeon Forge and Gatlinburg, TN recently.  The twin cities make up the most massive tourist trap in the South.   Now, one of my favorite tourist activities is the visiting of wax museums.   Our tourist Mecca does not disappoint. 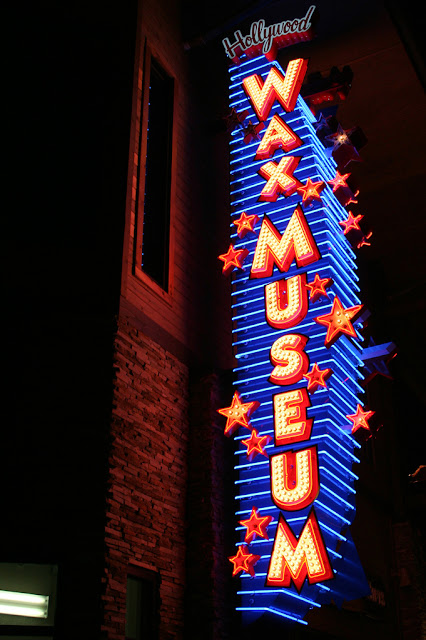 The "Hollywood" Wax Museum was originally located on the main drag in Gatlinburg, TN.  It is part of the "New Generation" of wax museum.   Traditionally wax museums featured tableaus of fake people behind glass or plastic.  The new generation opens things up and allows and encourages visitors to pose with and TOUCH the figures. 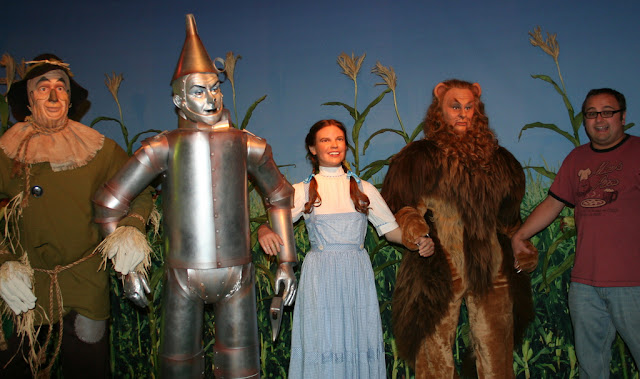 These types of Wax Museums are always a load of fund and my family always has a blast when we go.   It gives you an opportunity to live out lifetime dreams.

Such as marrying George Clooney...... 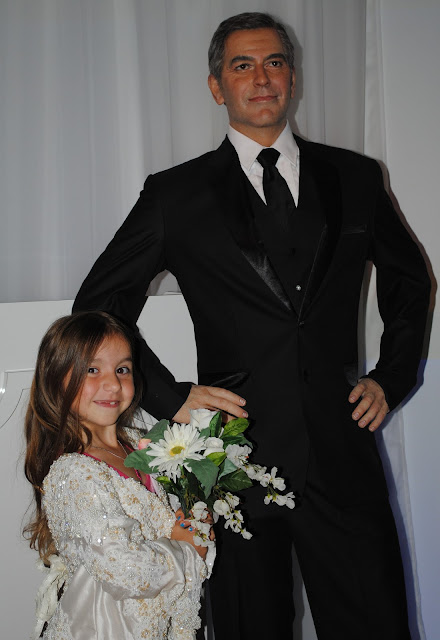 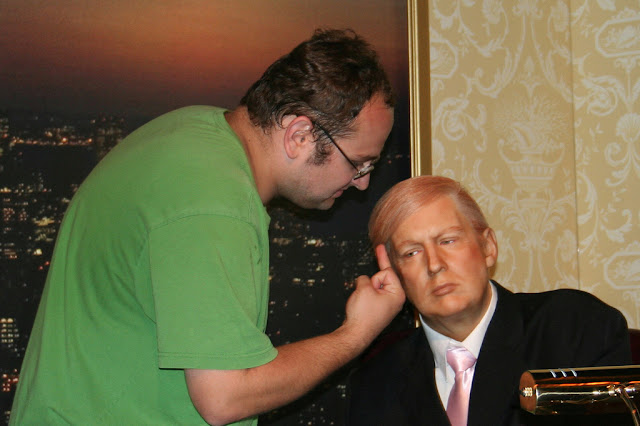 Or just kicking it with Paul Blart...... 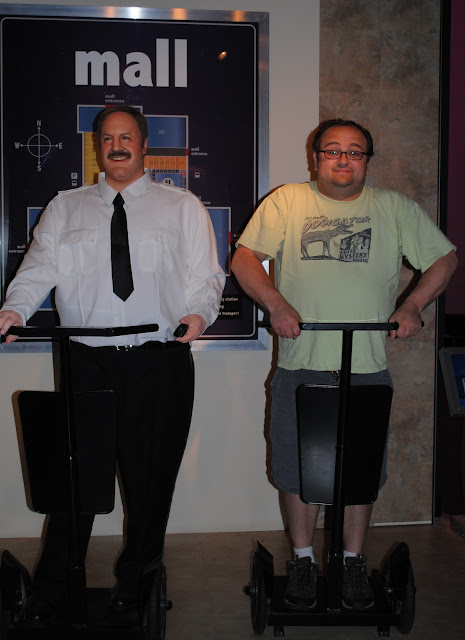 One of the oddest photo ops is this scene from Cider House Rules. 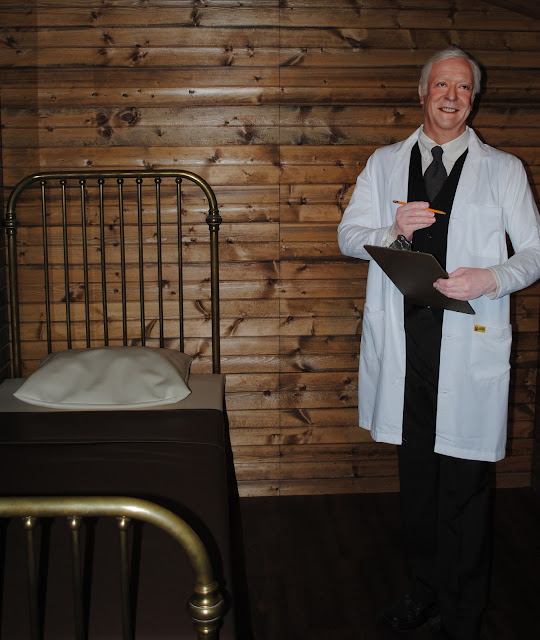 For those of you who haven't seen Cider House Rules, this is Michael Caine portraying Dr. Wilbur Larch.  The movie itself is about abortion.  Dr. Larch runs a secret abortion clinic back in the day when such things were illegal.   So, basically this photo op lets you pretend that you are getting an abortion.  Family fun!

After a few years the Wax Museum left Gatlinburg and moved to Pigeon Forge, TN.  They went big with this massive building featuring a life size King Kong that is the new focal point of Pigeon Forge. 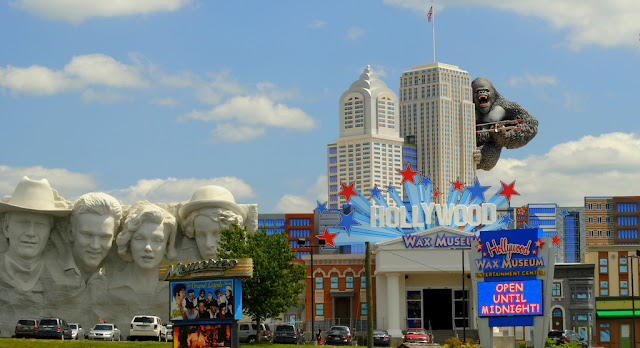 Complete with a Mt. Rushmore with celebrity faces.... 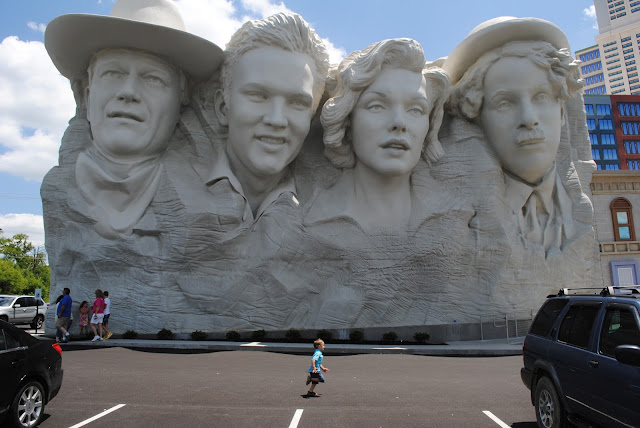 Now, the fact that tourists are allowed to interact with the figures sometime leads to the figures being compromised. 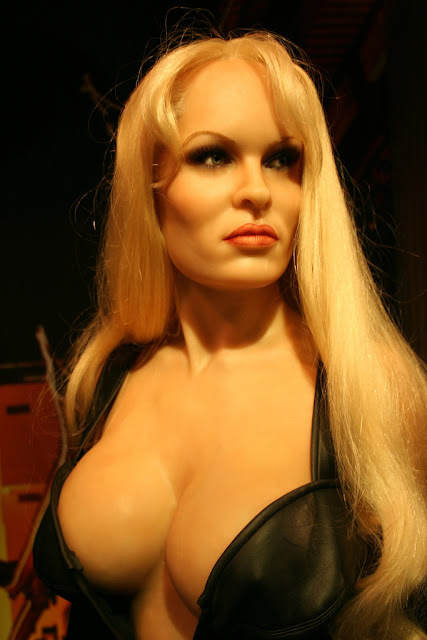 Some figures are done pretty well, like this spot on Clint Eastwood. 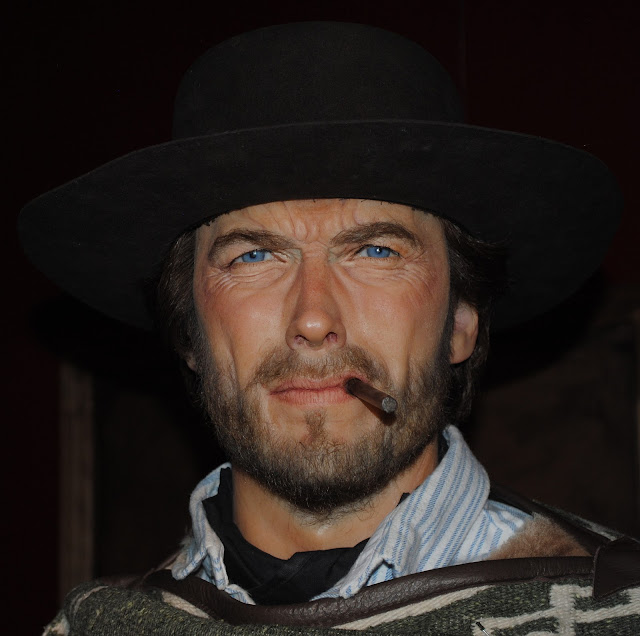 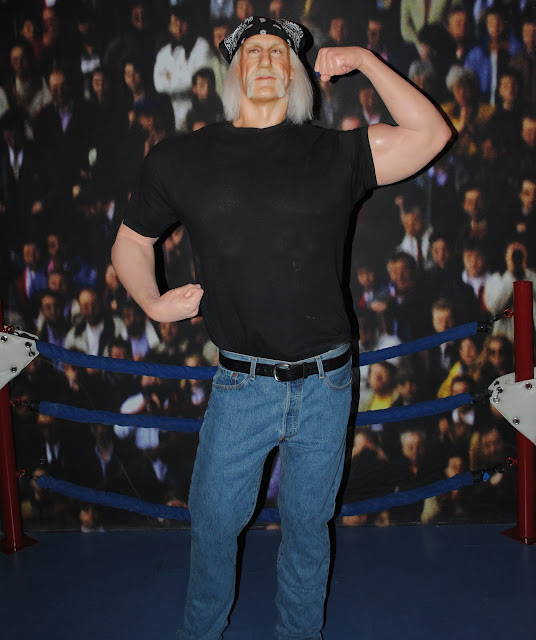 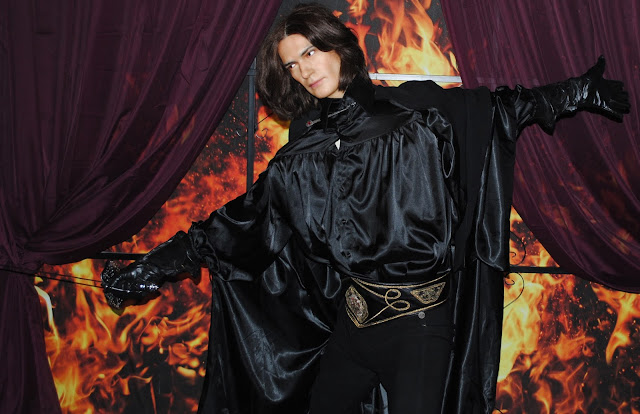 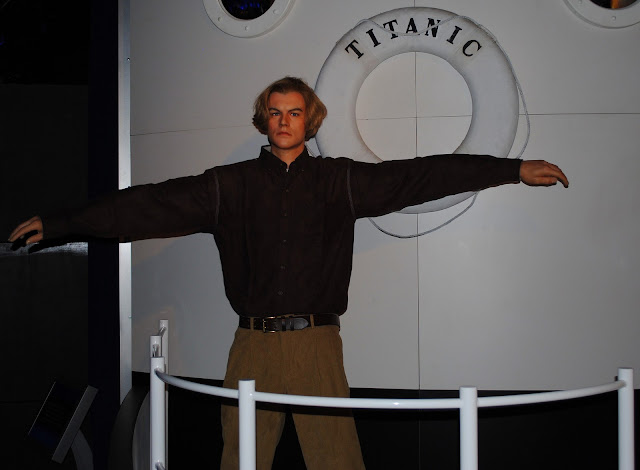 and of course my personal favorite: Tobey McQuire, looking like a moron while riding an invisible Seabiscuit..... 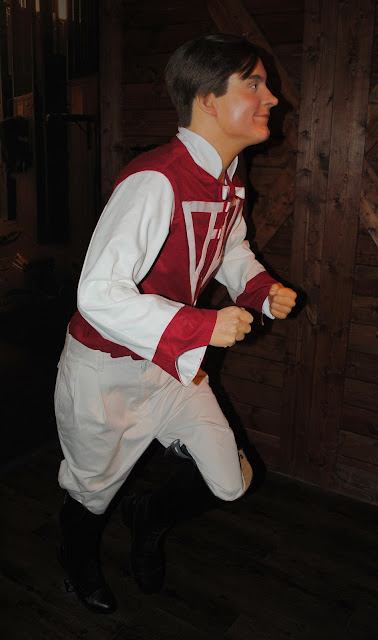 Of course, Hollywood can be a fickle thing and some of the figures don't age well.   The museum may try to remedy by throwing a new set of clothes on a figure. 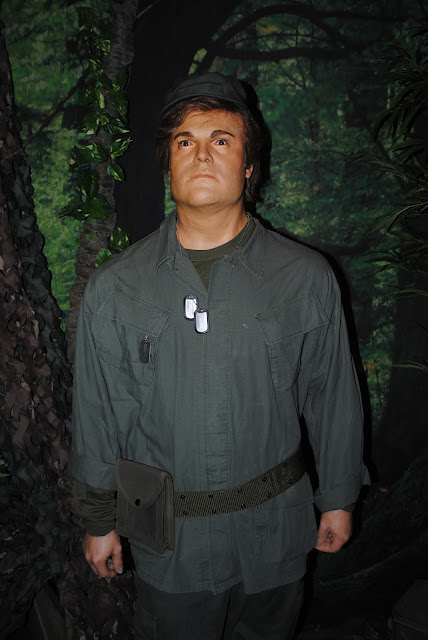 This used to be Jack Black from "King Kong", but they threw some military gear on him when "Tropic Thunder" came out.  Of course in Tropic Thunder he has short blonde hair and never dresses like this.  He ends up looking more like Radar from MASH.

But fear not, they do have an accurate Jack Black from "Nacho Libre" 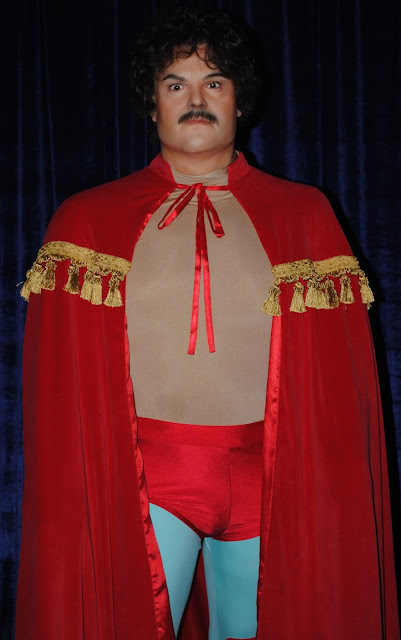 It appears that the ultimate downgrade is when a figure is re-purposed into "The Chamber of Horrors" where they simply throw a cheap halloween costume on a newly irrelevant actor.

We peeked under the mask.  It turns out Michael here is actually a re-purposed Collin Farrell, who used to have George Clooney's spot in the wedding room. 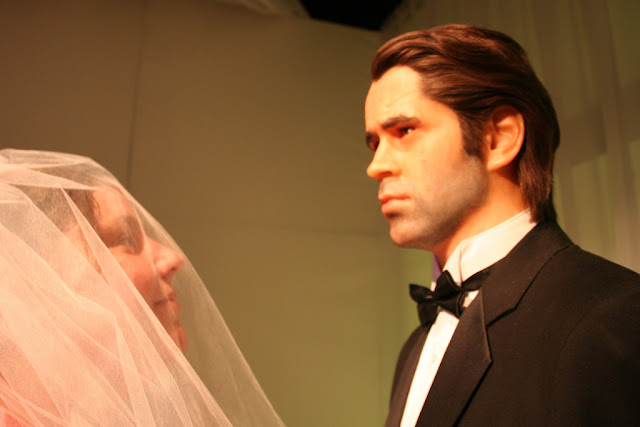 From Wedding room to Chamber of Horrors.....What a fall from grace...... 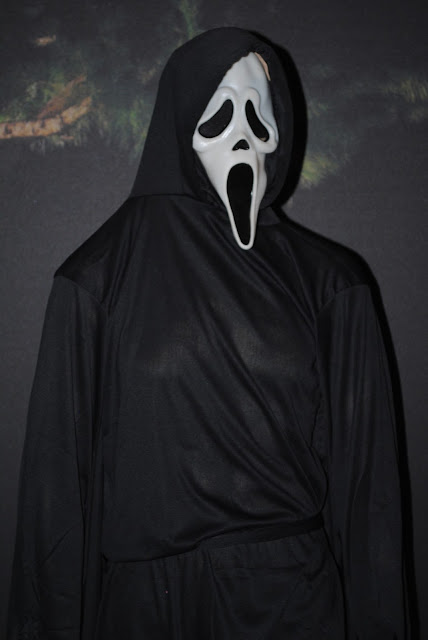 The Chamber of Horrors does feature a pretty freakin scary "Reagan" from the Exorcist. 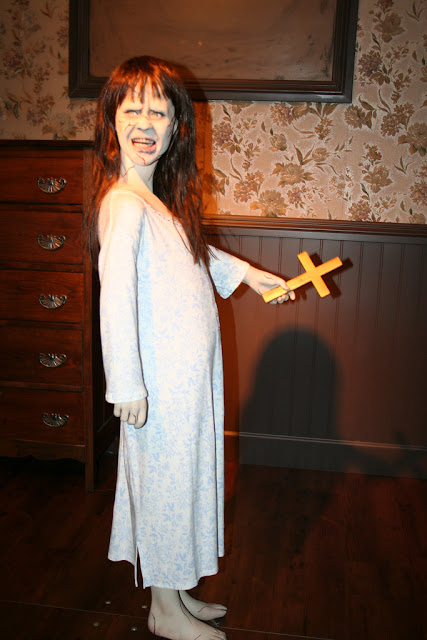 Hey, what is she going to do with that crucifix?

Anyways, if you want to see something really scary, I will leave you with this gallery of creepy faces. 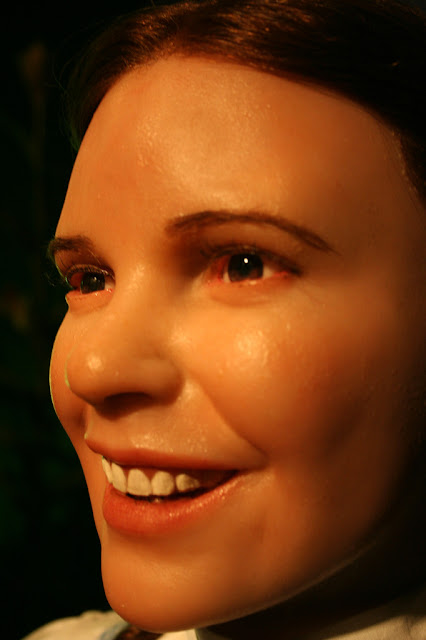 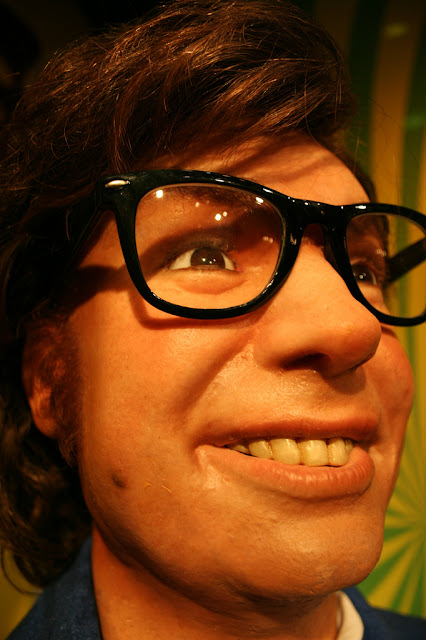 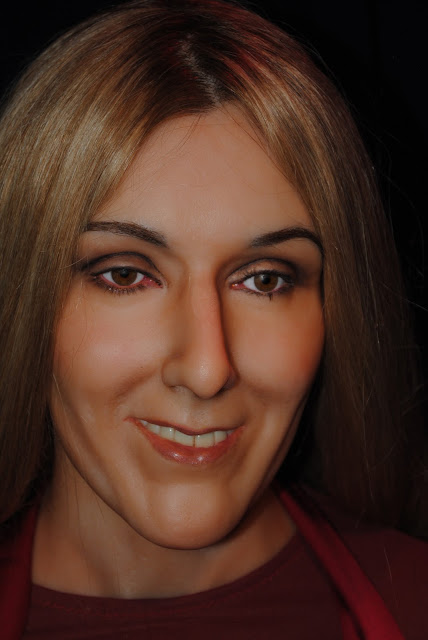 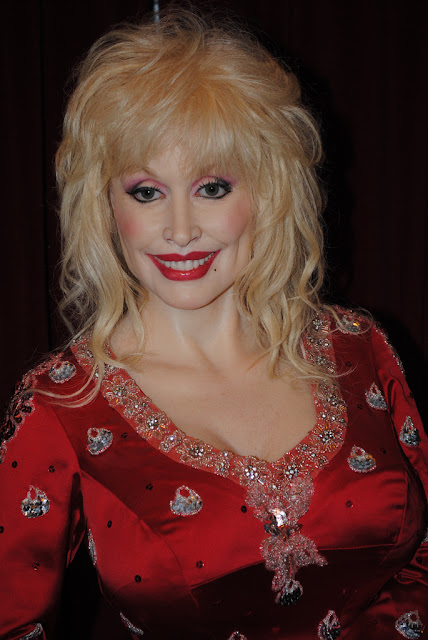 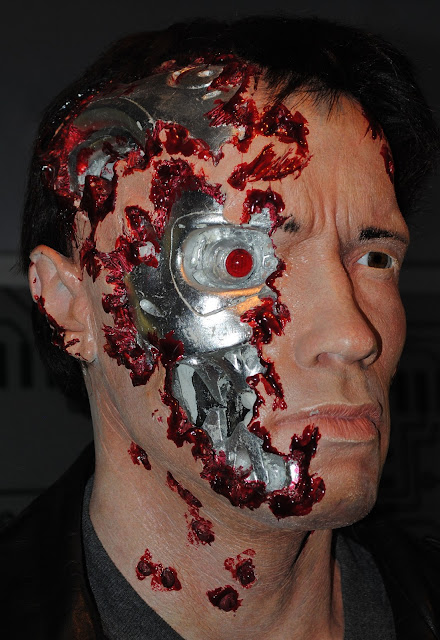 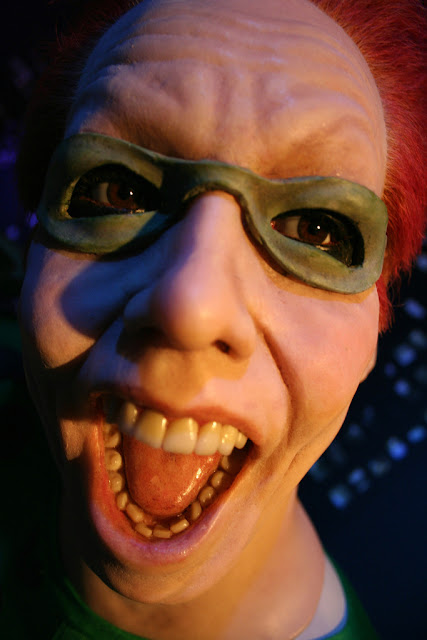