Battle for the Legacy of Popcorn Sutton

I have talked about Popcorn Sutton before.  He is the world's most famous Moonshiner, and the first member of the Hillbilly Hall of Fame.

Popcorn is also the inspiration for the yearly Hillbilly Woodstock, which I attended this year. While there I snapped this picture of a local Moonshiner. 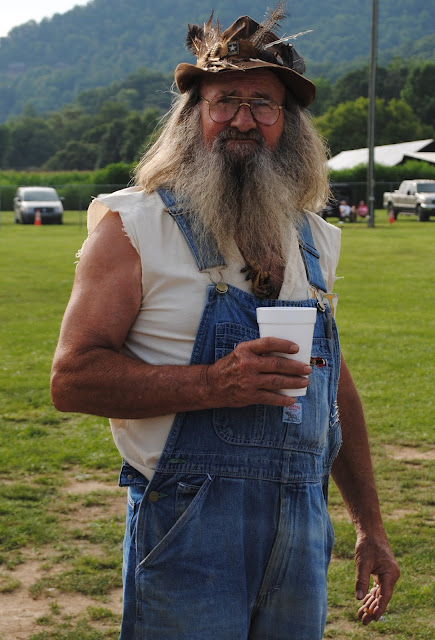 I did not know it at the time, but I had seen this man before.  Where had I seen him? 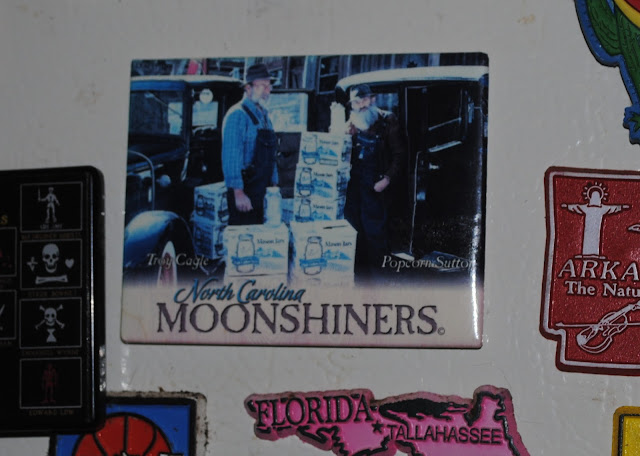 On my refrigerator!  His name is Troy Cagle and here he is featured alongside Popcorn on this magnet.   In fact, he appears with Popcorn on almost all his merchandise.  I was never really sure who Troy was, but it appears that he was a partner of Popcorn's.

I was born in the heart of Appalachia and am the last of a dying breed. I have ideas in my head that make me a genius, but also one step away from insane. I am the last of the mountain moonshiners. People today don't respect the way I live off the grid and carry a gun, but it's not my problem. My one light bulb burns strong in the cabin I made myself. The FBI may be on my trail, but I am smarter than them, despite the uncontrollable force they have over my mind and body due to their laser cameras. They can see through walls, but I can see into space. I have the spirit of an eagle and the heart of a bear.

Recently, when I tried to do a little research on Troy I found out that he had been called out by Sky Sutton:  Popcorn's daughter.

Sky is the author of "Daddy Moonshine" which is pretty much the definitive biography of Popcorn, and it was actually published the very same day he killed himself.   Sky has become very protective of her father's legacy and has called out try for claiming to be a relative and claiming to possess Popcorn's "secret recipe".  Troy has essentially declared himself the heir to Popcorn's legacy.  He is the NEW "Last Moonshiner".  According to Sky he is profiteering off a dead man.

The interesting thing about Sky is that I remember her from when I was doing research when I first learned about Popcorn.

Sky is a Historian in Massachusetts, who had not seen her father since she was two years old.   Before becoming a known as her father's biographer Sky had a less then favorable view of her father.  Sky had a blog dedicated to telling the truth about her father.  Sky was resentful of the hero worship that Popcorn received.   Sky wanted to expose her father for what he was: a dead beat father and a criminal.  She resented that so many people held a man in high regard that had abandoned her and denied her existence.

When Popcorn died her blog was re-purposed into selling her book and selling Popcorn related merchandise.  (Including "Popcorn Says Fuck You" bumper stickers). Upon Popcorn's death her opinion did a 180 and she started talking about her father in the romantic tones that she previously decried.   Here are some comments she made on a message board regarding her father being arrested for Moonshining back when he was alive.

The same "tourist industry" she is currently participating in.

Sky also denounces "Popcorn's White Whiskey", the LEGAL line of Moonshine with Popcorn's name on it, which is owned by Popcorn's wife Pam and Hank Williams Jr. of all people. 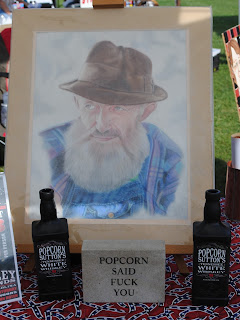 Sky and some of Popcorn's other children are also fighting with Pam over moving Popcorn's body.

Now, I want to make it clear that I am not judging Sky.  She has a right to talk about her own father any way she seems fit and relationships with parents can be complicated.  I just find this complex relationship an interesting aspect in the legacy of Popcorn Sutton.

Whether the legacy belongs to Troy Cagle, Sky Sutton, or Hank Williams Jr, is irrelevant.  Man has become legend and legend has become myth.  Popcorn belongs to the Mountains.

Please feel free to email me at jacobthecarpetbagger@gmail.com
And don't forget to check out my Flickr Photostream
Posted by Jacob at 11:34 PM