Previously, on the Carpetbagger we spoke about Harrison Mayes, a coal miner who traveled the country and erected concrete crosses declaring the return of Jesus.  There is another man who had a similar mission, a man named Bernard Coffindaffer.

I used to drive by this set of crosses everyday on way to school on the side of Highway 441 in Franklin, NC. 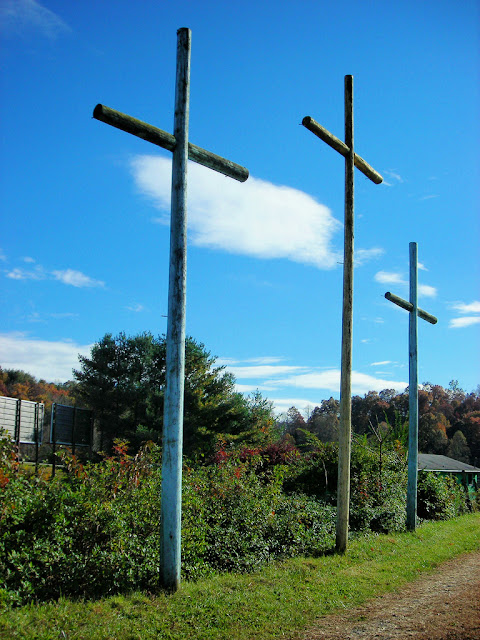 Now, seeing crosses in the South may not really be something to write home about.  There are displays of Christianity everywhere.  It is also a fairly normal custom to plant crosses on places where people have died in automobile accidents.   But something was different about these crosses.  First of all they were huge.  The middle was painted yellow and two outside were painted blue.  I quickly noticed, that they were not the only set. 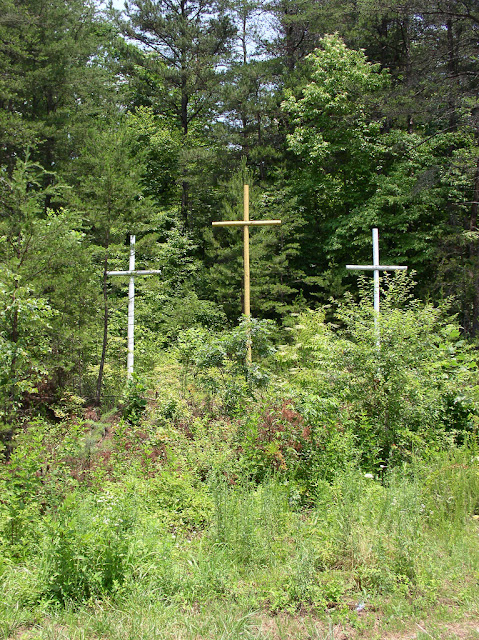 Unlike the other set, this one was on a dirt road in the absolute middle of nowhere and quite a way from the other set.

There was also this set in front of a single wide trailer near Sylva, NC. 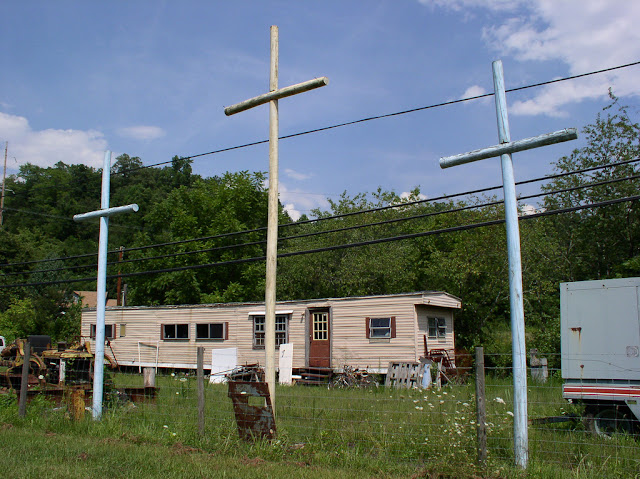 A close up look shows attention to detail as each cross actually has nails placed in the appropriate spots. 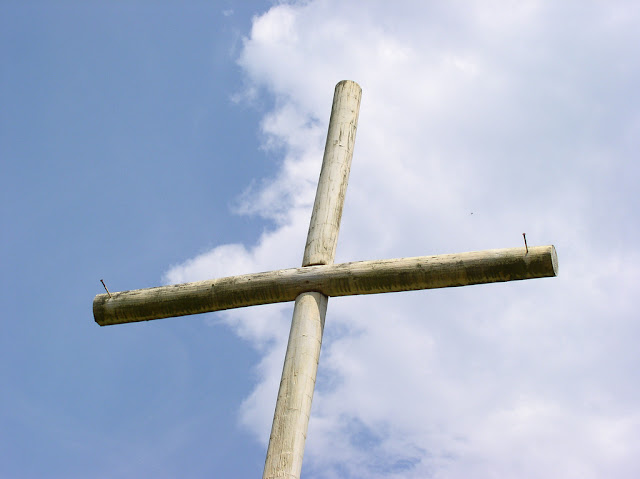 Thankfully a friend over at my Flickr page was able to identify the creator of these crosses.  This man....

Bernard Coffindaffer, much like Harrison Mayes, was in the coal mining industry.  However, unlike Mayes he was not a poor laborer, he was a big wig with a lot of money.

According to Coffindaffer's bio over on his tribute web site, Crosses Across America, he was born in 1935 to German Immigrants in West Virginia.  He would join the Marines and fight at the battle of Iwo Jima.  Of course this would only make him 10 years old at the time of the battle, so either they have his birth date wrong or he is an even more amazing man then previously thought.

After suffering two heart attacks Coffindaffer would dedicate his life to Christianity and the mission of planting these crosses across the United States.  He would spend approximately 3 million dollars on this project and countless man hours. 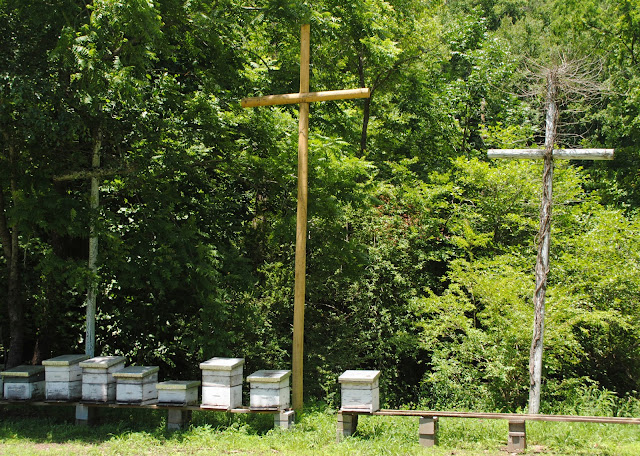 Here is Crosses Across America's chart on how many crosses were planted in each state.


It appears that at one time there was actually more crosses than people in West Virginia.

Coffindaffer would meet with the landowner (often farmers) and ask permission to plant his crosses.  The constructions would be accompanied by a dedication and a service given by Coffindaffer.  This is differ from Harrison Mayes' strategy of planting them in the middle of the night without permission.

Now of course over time the crosses fell into disrepair and were removed, but because of the vast amount that were planted there are still quite a few to be found. 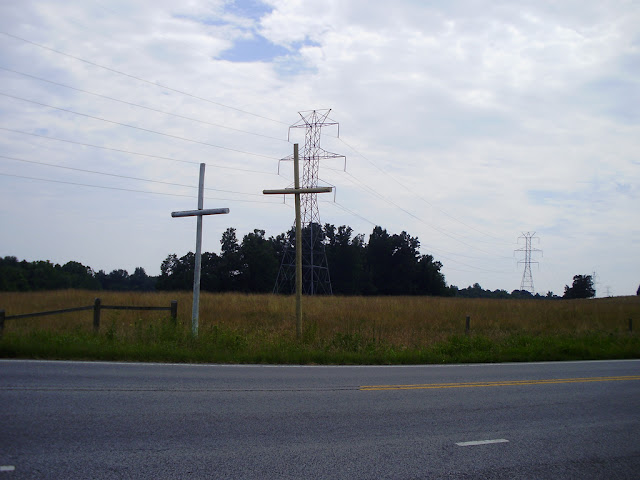 I have taken to photographing the ones I can.  Unfortunately, many are difficult to access as they are far from the road, or they are planted on freeways were it is to dangerous to pull over.  Also, a lot of the photos look exactly the same.  I have located the following number in each state. 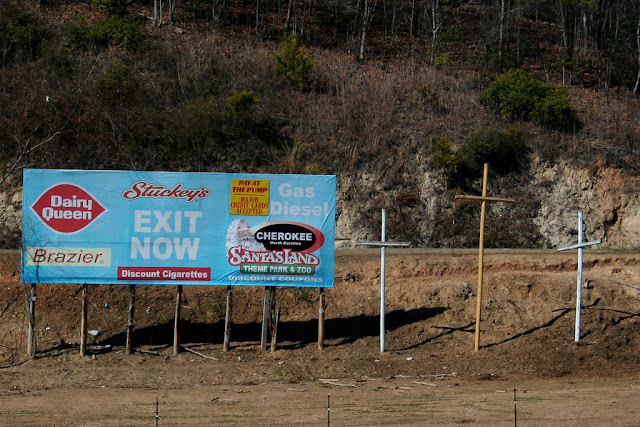 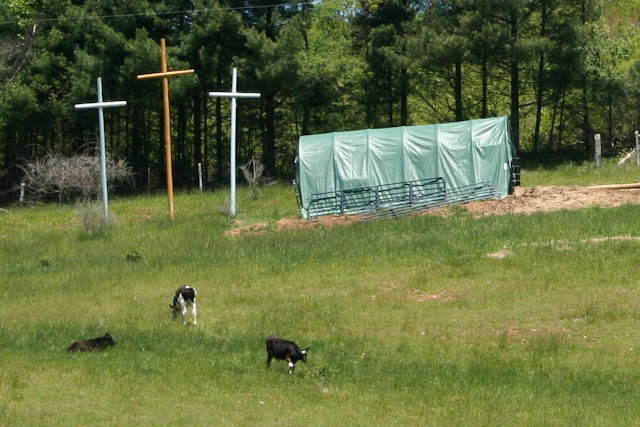 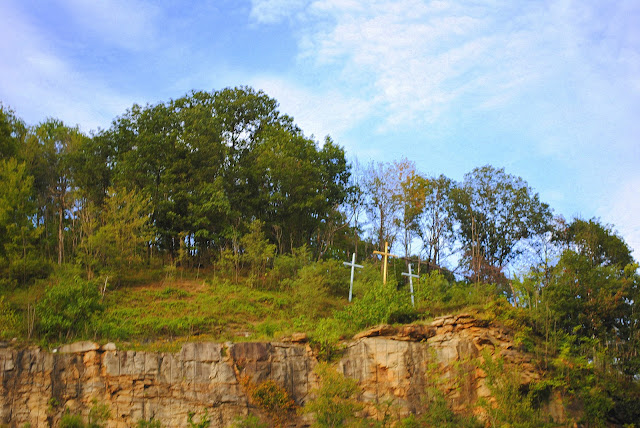 Crosses across American is currently working on locating and restoring all of Coffindaffer's original crosses.   After that, their plan is to raise money to begin constucting NEW crosses.  These will be the crosses of the future, made of durable space age plastic, instead of the crumbly lumber that Coffindaffer used.  Their final goal is that every 50 miles of US Highway will have a set of crosses.  So if you haven't seen one already, you will see one soon.

There was actually a documentary made about Coffindaffer, but it only aired on local public television, so I haven't seen the full thing.  However, the introduction can be found on Youtube. Its interesting to take a look at, mainly for the unnecessarily foreboding music.

Please feel free to e-mail me at jacobthecarpetbagger@gmail.com
and check out my Flickr Photostream
Posted by Jacob at 11:43 PM