Judaculla and Other Awesome Cherokee Monsters

Now I am in no way an expert on Native American folklore, but I like what I have heard.  One trend I have noticed is their penchant for spectacular Godzilla-esque monster.  I wanted to take some time to talk about some of these amazing mythological Cherokee beasts.


The Uktena is a horrifying beast that came from the pits of hell.  It has the body of a giant snake, wings, and deer antlers for some reason.  One of the most intriguing characteristics of the Uktena is that it has a giant diamond imbedded in its forehead.  Anyone who could kill the Uktena could steal this diamond and use it to gain great power.  Unfortunately, the Diamond was also the Uktena's most dangerous weapon.  It would flash and hypnotize you and force you to run into the Uktena's mouth.  Oh yeah, and he could also breathe poison steam.

So is the Uktena still out there?  No, he's dead.  He was killed by a Cherokee Medicine man named "Groundhog's Mother".  It was said that if one was brave enough when they faced the Uktena they could summon giant eagles to assist them in killing it.  As late as 1890 a Native American claimed to still possess the diamond from the head of the Uktena.   It is said that it is still hidden in a cave in Cherokee, NC wrapped in deer skin and placed in a clay pot.  So far, all my attempts at locating the Uktena Diamond have been unsuccessful.

Me and my family were visiting the museum on top of Brasstown Bald, the highest point in GA (that's actually not that high).  The museum was a bit dry, discussing such things as railroads, conservation and corn.  Then I stumbled upon this. 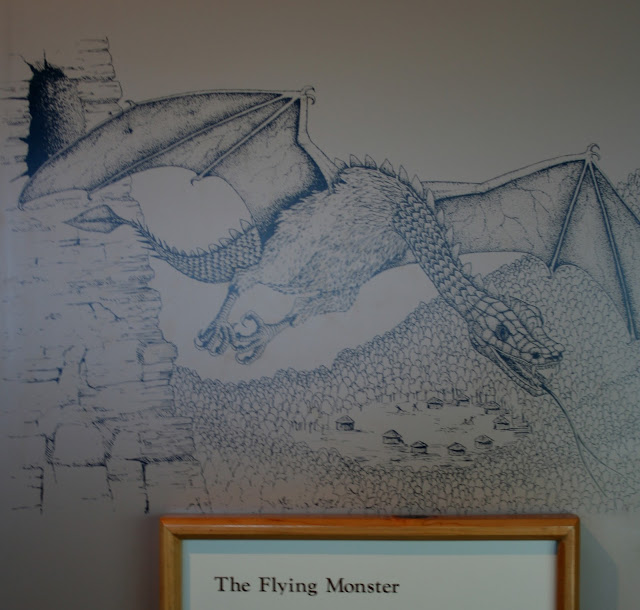 Cherokee legend states that there were straight up dragons terrorizing the mountains along the border of GA and NC.  These creatures were said to hide in the dense forests on top of mountains and swoop down to Indian villages to eat children. Luckily,  much like the Uktena, these monsters are dead.  A Cherokee warrior set out to kill the monsters that were eating his village's children.  He prayed to the great spirit and lighting was sent down to kill the dragons.  Unfortunately, the warrior was also struck by lighting and turned to stone.  It is said that his petrified body is still standing on top of the mountain at Standing Indian Campground in Franklin, NC.  The lighting was also said to strip the tops of mountains of trees so the monsters could not longer hide.  These explains "Balds" or unexplained spots with no trees on the tops of mountains that appear in these areas.

Originally called Tsul 'Kalu, this beast's name was butchered by the English Language until it became Judaculla.  The name translates literally into "The Slant Eyed Giant".   Judaculla would jump from mountain top to mountain top, his voice made thunder and his arrows made lightning.  He would drink whole streams in one gulp, so at first he seems like some sort of Native American Paul Bunyan.

Interestingly enough, when The Bible was translated to the Cherokee language the name "Goliath" was changed to Judaculla, so he may be more nefarious then originally thought.

Judaculla's primary claim to fame in the region is the creation of "Judaculla Rock". 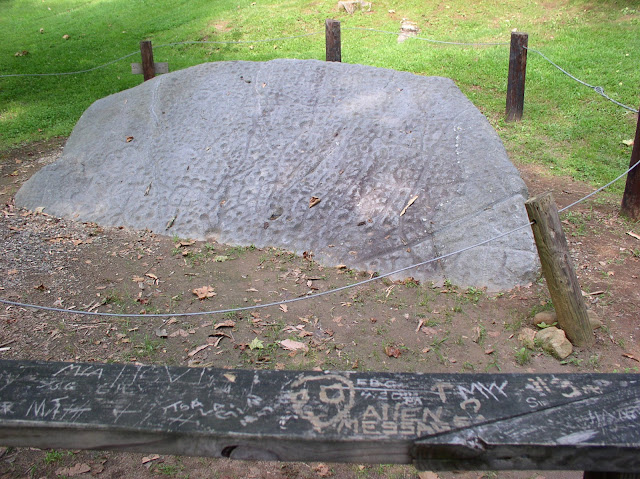 Judaculla rock is a prehistoric Rock in Jackson County, NC near the boyhood home of Dr. John Brinkley.  The rock is covered in symbols of unknown origin that no one has ever been able to translate.  The Cherokee legend is that the stone is actually the imprint of Judaculla's foot as he jumped down from the mountain.

As you can see from this old timey picture the rock used to be bigger and more clear.


They filled in the carvings with chalk to make them more visible, sadly this helped corrode the rock leaving it a fraction of its former glory.

One of my favorite theories about the Rock was put forth by a local paranormal group.  As they outline on their Web Page, their theory is that the pictures on the rock are actually micro-organisms, which must have been viewed by an ancient culture that somehow invented the micro-scope.

Please feel free to e-mail me at jacobthecarpetbagger@gmail.com
and check out my Flickr Photostream
Posted by Jacob at 12:24 AM