Things People Only Eat in the South

For a clueless Midwestern carpetbagger I found myself as somewhat out of place when my first job in the South was working at a Southern Cookin restaurant.  It seemed to me at first that "southern food" was simply an excuse to either pickle or fry everything in sight. 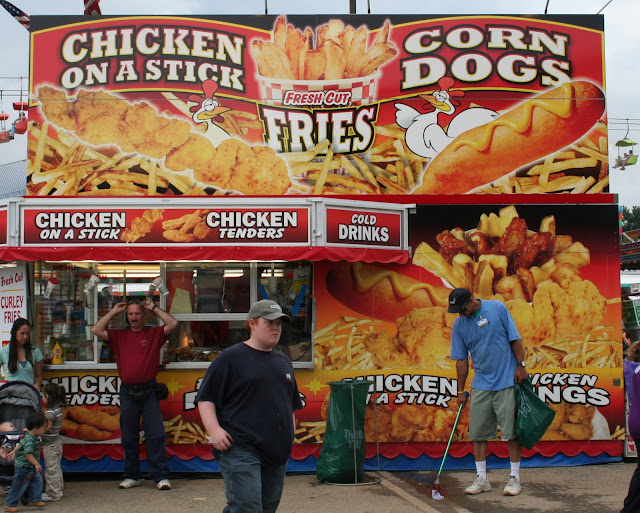 And course the "vegetables" in the South have as much meat in them as a steak.  Pig fat, pig feet, or just pig is used to season everything. 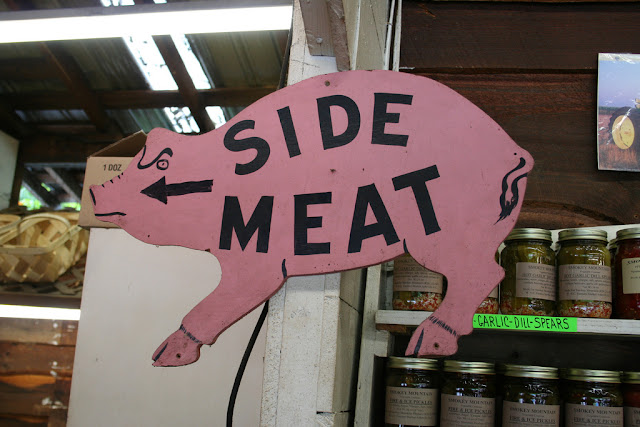 Over time I have grown to greatly appreciate the wide variety of Southern Delicacies I have encountered over my time here in the South.  I wanted to take time to acknowledge some of the more unusual delicacies found here in the South. 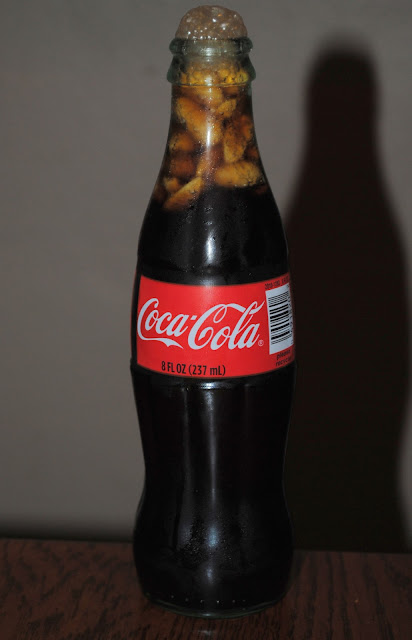 This one is pretty simple.  We have previously discussed that despite its international fame, that Coca-Cola is a child of the South, being created by a confederate soldier as a way to cure his morphine addiction.  Mixing coke and peanuts has been a long time Southern gas station snack.  Of course simply eating peanuts and coke isn't good enough, a true Southerner puts the peanuts in the glass bottle.  I tried this recently.  Fairly decent novelty.  Its a good treat for those who love salty and sweet mixed together. 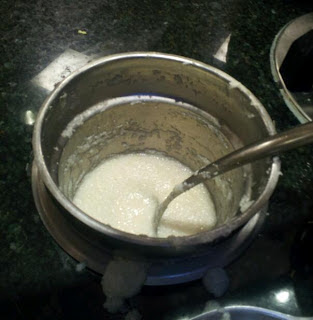 Grits are probably one of the most synonymous foods of the South.  Personally, I have had a hard time warming up to grits for breakfast.  To me they taste as flavorful as one would imagine that ground up corn cobs would.   Regardless, virtually every southern born person I know vows to love grits.

While I do not like grits prepared for breakfast (usually served with added sugar and butter, or cheese and hot sauce).  I am quite fine with them once seafood and cream sauce get added to the equations.  Shrimp and Grits is the trademark dish of the low country and has become on of my favorites.

These scallops covered in cajon seasoning, Alfredo sauce over grit cakes is one of the best things I have ever eaten.

For those of you who can't get enough of grits the National Grit Festival is held every year in Warwick, GA.  Of course if one nation can't contain your love of grits you may want to attend the WORLD Grit Festival in St. Georg, SC.  If you are like me and only like your grits with seafood on them, they have a Shrimp and Grits Festival in Jekyll Island, GA.

Any connoisseur of fine food and spirts know that it is extremely important to match up the correct food with the right wine.  White wine goes with fish, red wine goes with beef and there is even something called "dessert wine".  It gets a lot more complicated then that too, but I am a simple Carpetbagger and know very little about wine.

Like matching a fine wine with the correct entree is a necessity at fine dining establishments, at the dime stores and gas stations of the South the same care must be taken.  The moon-pie, the southern born chocolate covered marshmallow sandwich, has only one beverage that fits its sophisticated flavor.  That beverage is Royal Crown Cola, better known as RC. 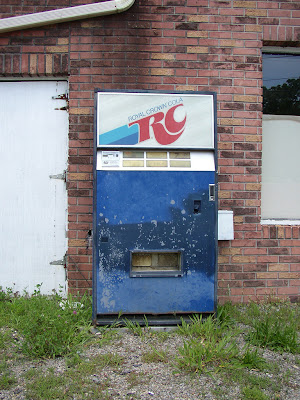 Drinking any other beverage with a moon pie would be like drinking red wine with a piece of fish.  You my not understand why, but you just don't do.

RC and Moon Pie are so karmically linked that they actually share a festival in Bell Buckle, TN.  My Flickr buddy Brent posted some amazing pictures from the festival including a reworking of Shakespeare's Midsummer Night's Dream featuring a love story between a can of RC and a Moon Pie. 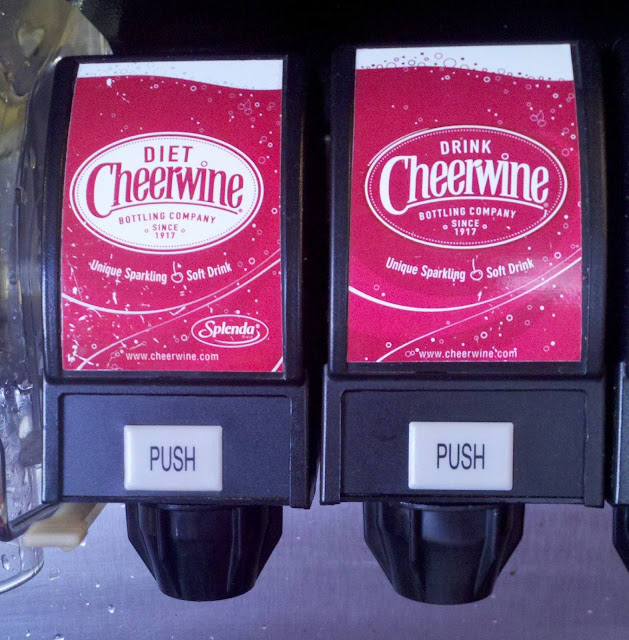 Speaking of wine, here is the beverage that always confuses out-of-towners.  Despite the word "wine" in its title, Cheerwine is complete non-alcoholic.  It is a unique Cherry Soda that is exclusive to the South and is the "wine" of choice with Carolina BBQ.  The Soda has been around since 1917 and has an extremely loyal cult fan base.  The "wine" part of the name is a nod to its dark burgundy color.  Its fast become one of my favorite sodas. 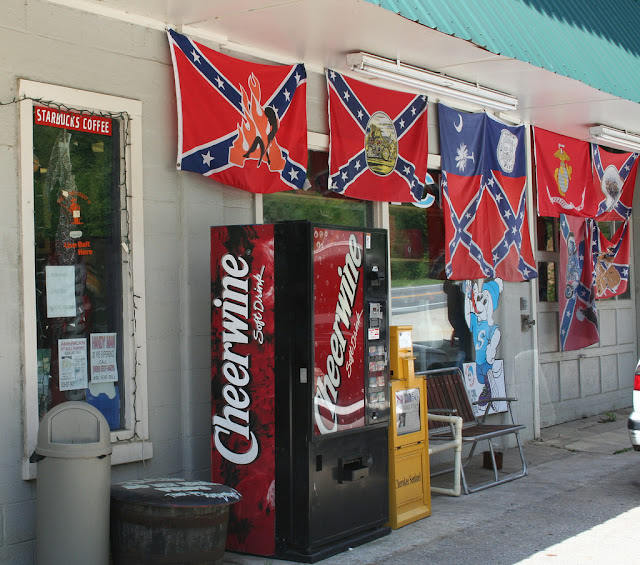 A few years back they released a special edition Cheerwine flavored Kristy Kreme Doughnut.  Local stores could not keep them stocked.  We managed to get a box and trust me it was one of the best things I have ever put in my mouth. 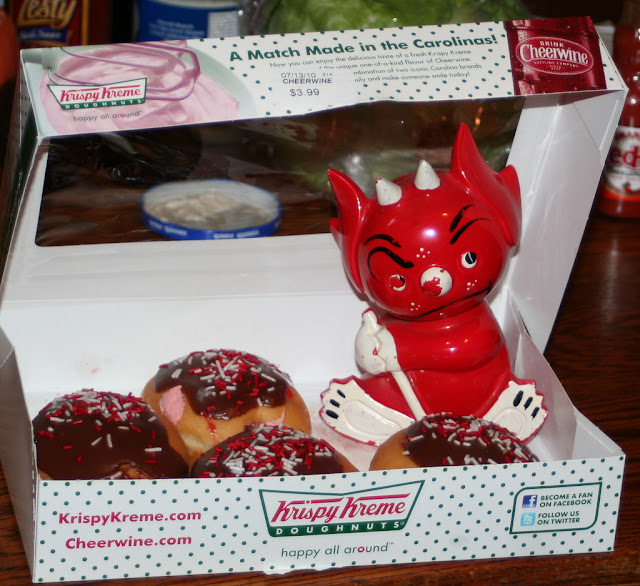 As you may notice. is quite a trend down here, there is a Cheerwine festival in Salisbury, NC. 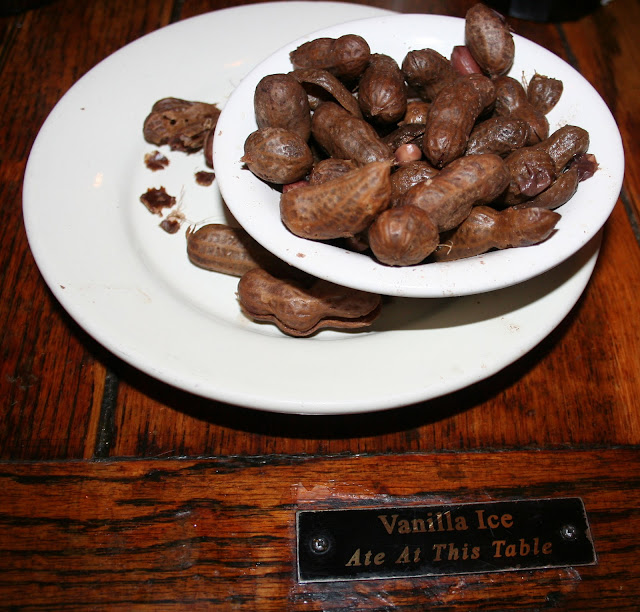 I have discussed the phenomenon of Boiled Peanuts in the past at great length.  They are one of the most unique a delectable treats the South has to offer.  The best peanuts are of course purchased in roadside stands out of big smelly pots like this. 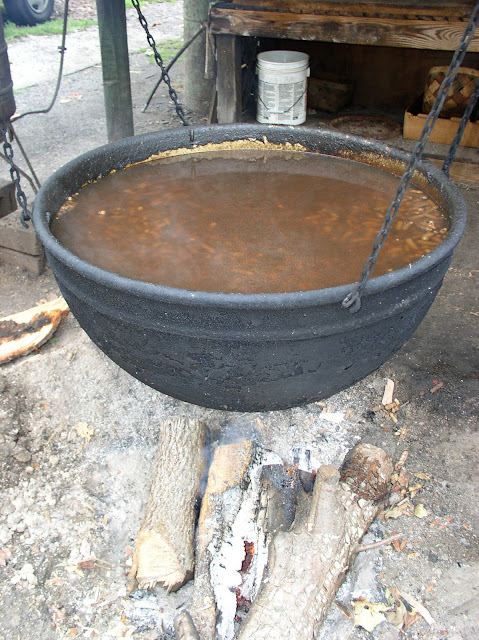 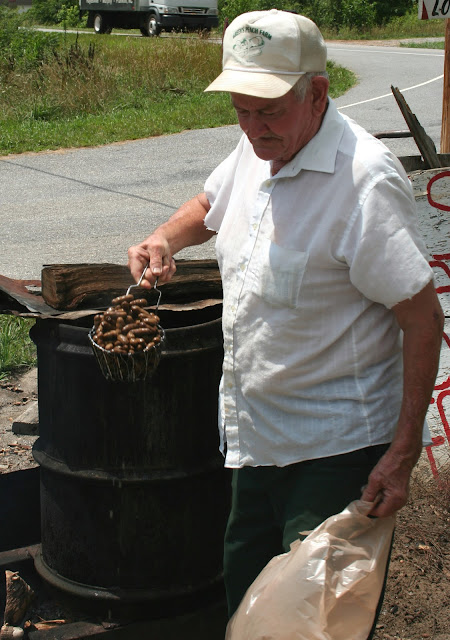 They are one of my favorite southern delicacies.  While the idea may seem strange to some people, they taste kind of like a cross between peanuts and olives.  They especially good hot.

Believe it or not this Boiled Peanut Ice Cream was one of the best things I have ever eaten. 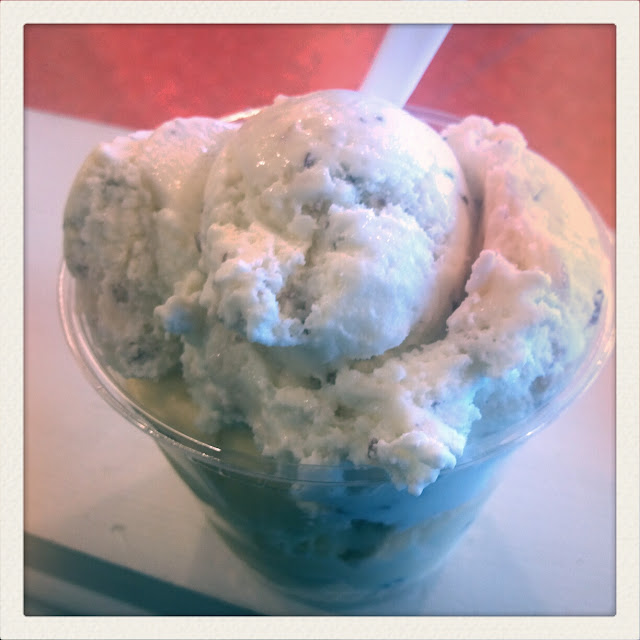 And yes, of course there is a Boiled Peanut Festival.  Its in Luverne, LA. 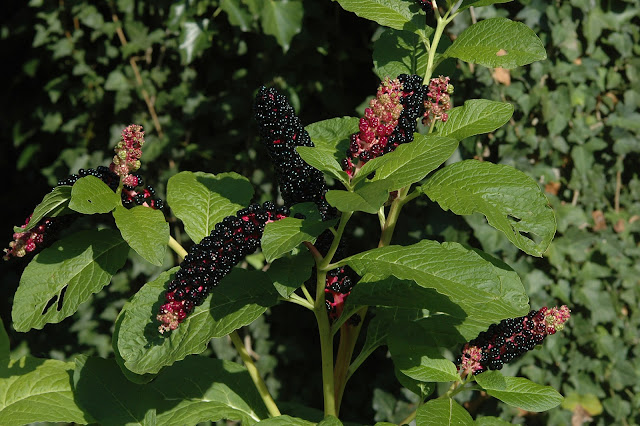 Polk Salad is one of the strangest Southern Delicacies.  Strange because every part of the Polk Berry Plant is poison, making the Appalachian version of Fugu.  The plant must be boiled at least three times before the poison is dissipated.  It is then served covered in bacon grease.  My wife (my personal encyclopedia of Southern knowledge) informs me that it tastes horrible and bitter.  It is apparently often used more as a folk remedy for illness.

One time when my son was little him and his friend took polk berries and painted their face like Indians.  There skin started burning and they both broke out into nasty rashes.  So you may not want to put them in your mouth.

There are less toxic versions of this delicacy.  Some variations simply cover iceberg lettuce with bacon grease and call it a meal. 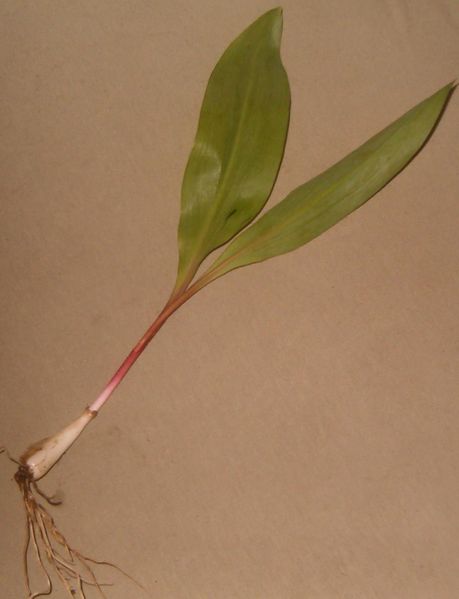 The ramp is a wild onion that Southerners go gaga for.  When spring hits you can see pickup trucks parked all along the road selling this delicacy.  Ramps are not farmed.  They are hunted, as they only grown wild.  I feel this is a large part of their appeal.  You can tell ramp season has began when people start mowing their lawns and it put the powerful odor of onion and garlic into the air.

Ramps essentially taste like the combination of onion and garlic and are notorious for causing bad breath.

Now, as you can tell from this article Southerners love having festivals to celebrate their local food.  I have found no less then 9 different ramp festivals across the South. 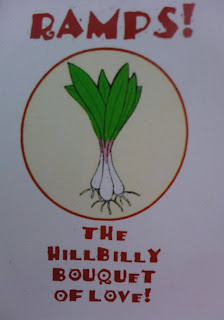 Lucky for me, they actually have on in Waynesville, NC, the town I live in.  I attended a few years back. 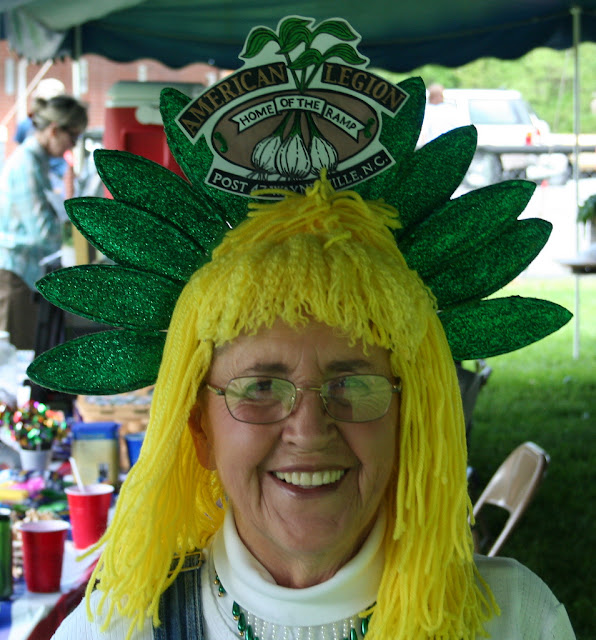 I was given a dish of food infused with ramp including ramp meatloaf, ramp eggs, and ramp potatoes. 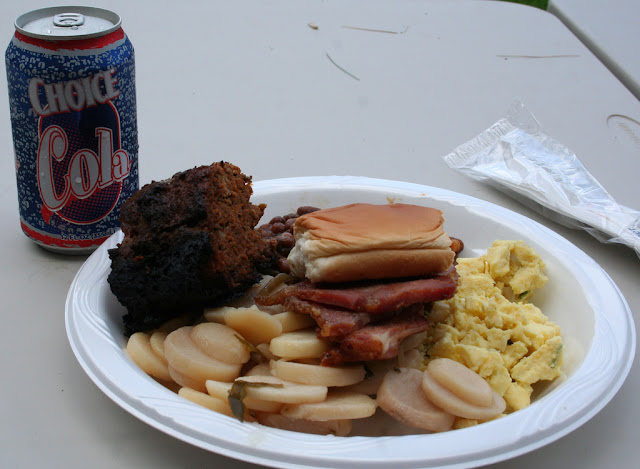 Hope you all enjoyed this look at the strange delicacies of the South.