The Joys of Getting Way Too Close to Alligators 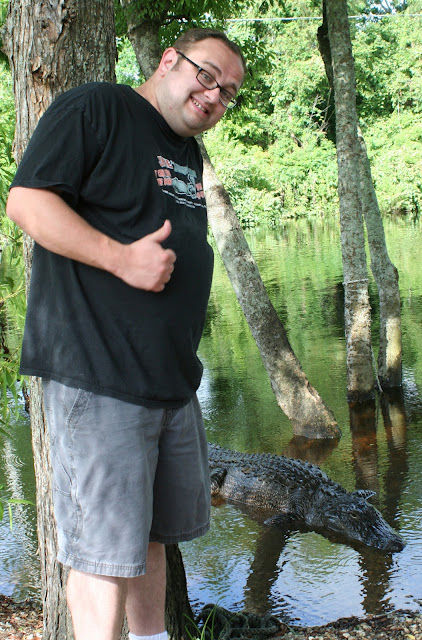 I have been accused by some people close to me that I have an unhealthy obsession with Alligators.  I don't know what it is, I am completely fascinated with them.  When I see one I feel like a little kid seeing a real live dinosaurs.  Down here in the South there is a constant struggle between Alligators and humans.  We destroy their habitat and they bite off our legs and eat our dogs.  Will our two species ever truly find peace?  I have no idea.

I remember the first time I saw an Alligator up close in the wild.  It was Merle's Inlet near Myrtle Beach South Carolina, me and my family were on a nature and history tour.   Our tour guide pointed him out basking on the side of a freshwater swamp.  I took this picture of him, without any form of zoom lens. 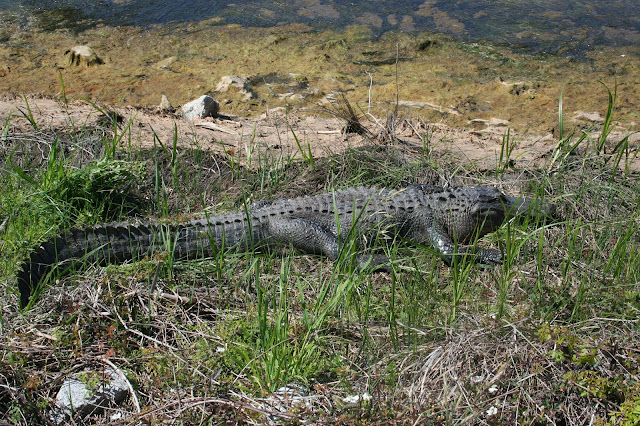 I was enamored.  Taking a picture wasn't enough.  I wanted to pet him.  I wanted to be able to tell my yet unborn grandchildren that I had petted an alligator.  I figured if I petted the end of his tail, he probably wouldn't care.  If he did care, I would have time to turn and haul ass in the other direction.  And if he bit me, that was something I could also tell my grandchildren.

As I edged closer my wife told me I was being stupid.  As I ignored her pleas for sanity, the tour guide cut me off and told me not to get any closer.  Held down by the man again.

In retrospect, they were both probably way smarter then me in this situation.

Fast forward a few years and I would find myself plunged head first into Alligator heaven.  We went on a swamp tour with Cajun Pride Tours.

I want to give the Carpetbagger's full endorsement to this tour company, because it was awesome. 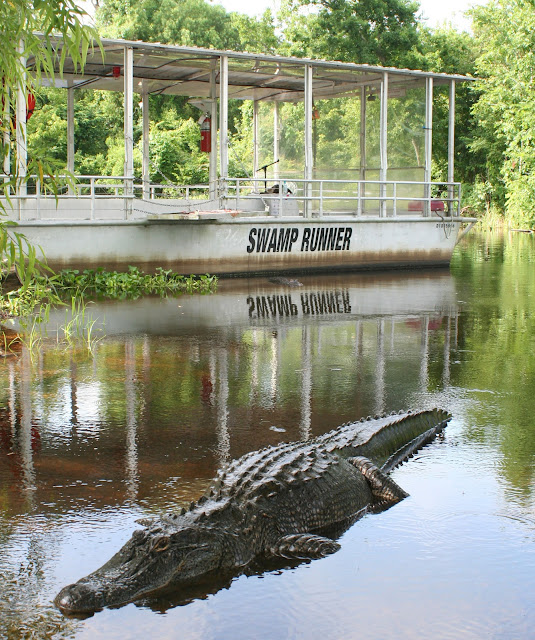 Now, it was what not I was expecting.  They don't take you out very far.  The swamp is not all the amazing or gothic, but they do more then make up for it in pure Alligatorocity.

The first thing I saw when arrived was a man after my own heart, getting way to close to an alligator. 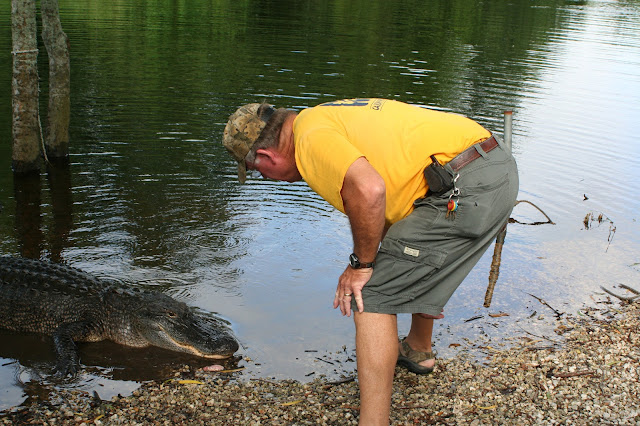 This was obviously no kill joy, like the man in Merle's inlet.  He treated the alligator like a puppy and handed out marshmallows to tourists so they could feed him.  The fact that Alligators like marshmellows somehow takes away some of their mystique.

Luckily, this wasn't just some crazy guy wondering around the swamp, he was our tour guide!  His name was Captain Coyote and he was awesome. 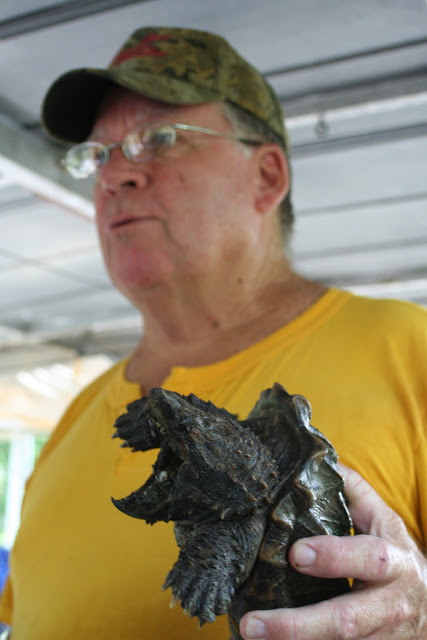 While waiting for the tour to began I was able to beat out my previous record and get significantly closer to an alligator then I had before. 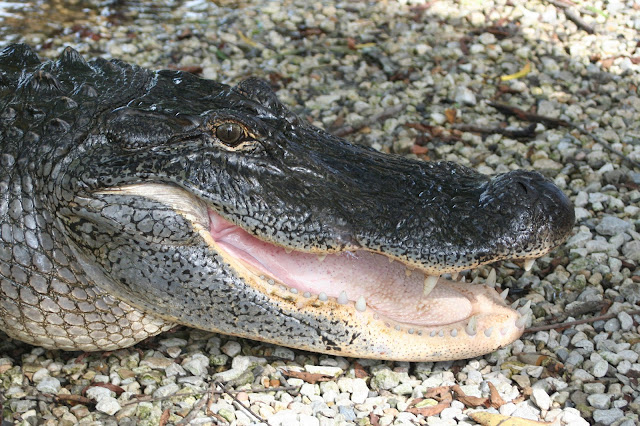 As soon as we set sail the boat was swarmed by wild alligators, including this 13 foot monster Coyote had dubbed "Crawford".

The highlight of the tour was of course when Coyote went out to the edge of the boat and begin feeding the swarm of alligators chicken necks by hand! 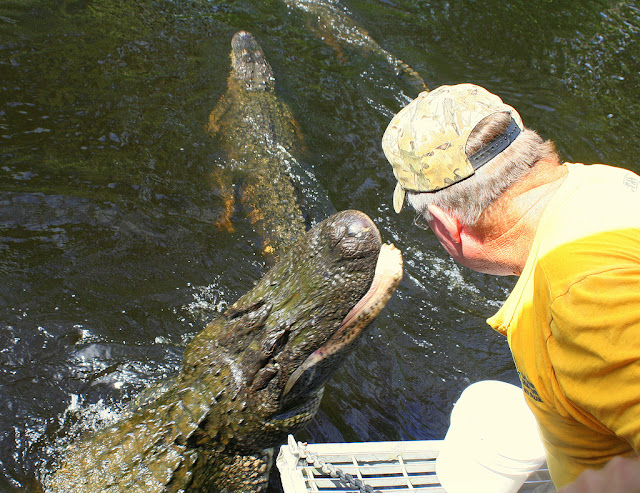 It was totally insane!

Then, in another bit of wish fullfillment Coyote passed around a baby alligator named "Elvis".  I finally got to hold an alligator, even if he was a little tiny. 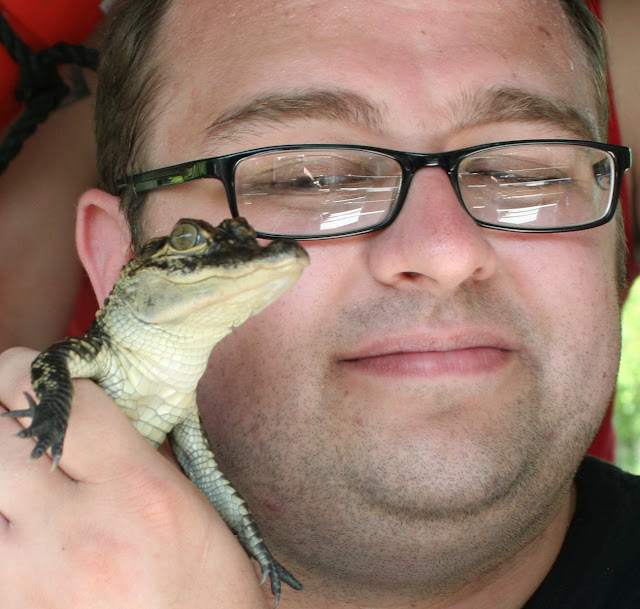 Captain Coyote told a story of when he was actually bit on the hand by an Alligator.  Now Alligators have dirty mouths full of rotting flesh and therefore when you get bit the injury is guaranteed to get infected.  It took months for Coyote's hand to heal, but he made a full recovery.  Out of curiosity he later checked his life insurance and found out that had his hand been lost he would have received a million dollars.  This story has haunted me for years.  Would I be willing to stick my hand in a an alligator's mouth for a million dollars?  Yeah, probably.

As awesome as this experience was, it would not quell my gator lust.  When we went to my sister's wedding in Cancun, I set out on the resorts golf course to locate the Alligators most deadly cousin: The Crocodile.

Like any place where there are crocodillians there are people who are there to ruin your fun.  There were signs everywhere telling me not to molestar the alligators.  (Whatever that means.) 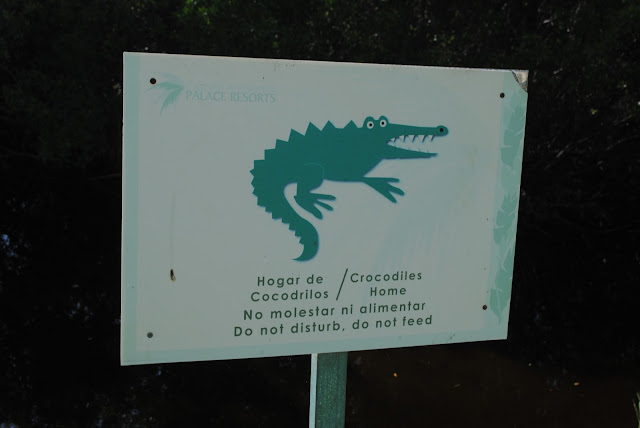 I hope "Molestar" does not include using a papya to trick to Crocodile near shore to get a better picture. 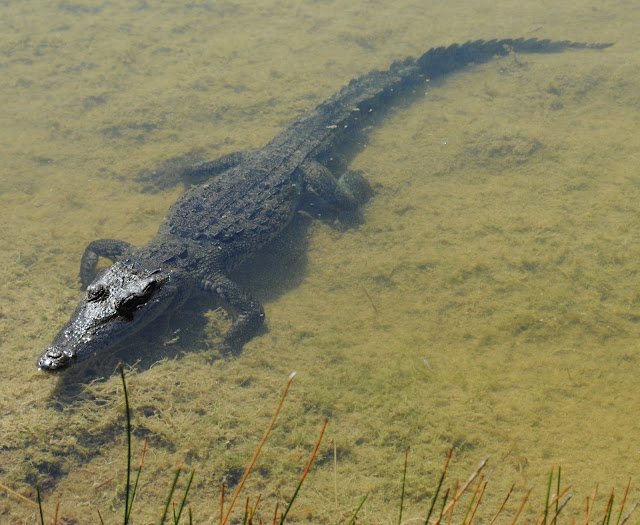