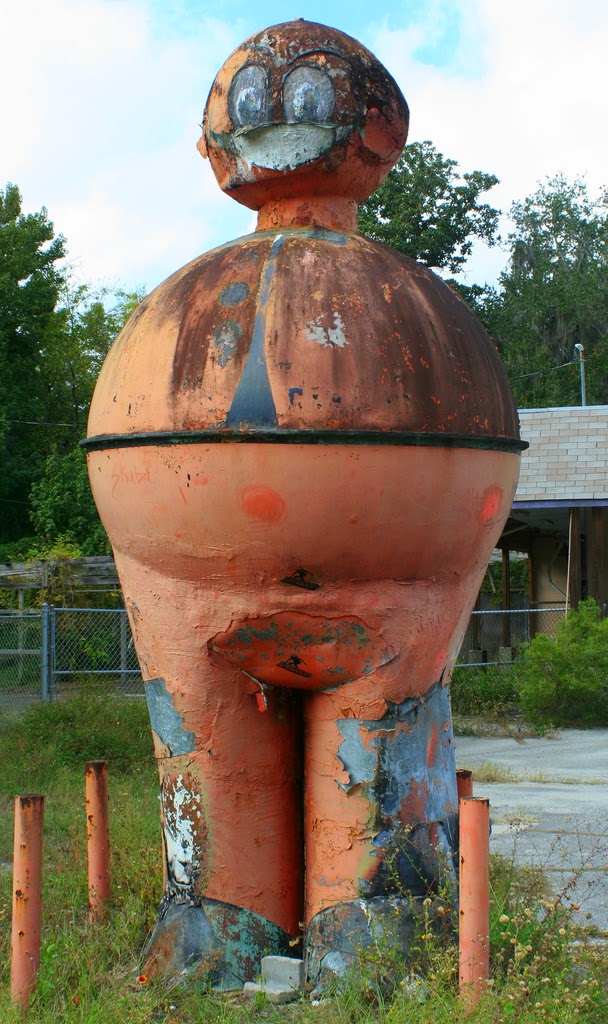 Back in 2008 me and my family took our first trip to Florida.  I had not been there since I was in first grade so it was a huge deal for me and I wanted to see as much as possible.  We had a tight schedule though, as we were set to meet my parents at Disney World.  I however was dead set on seeing as much of this magical of city as possible.

As we rolled into St. Augustine I saw something that my blood pumping immediately.   Right on the side of the road was an airplane cemetery. 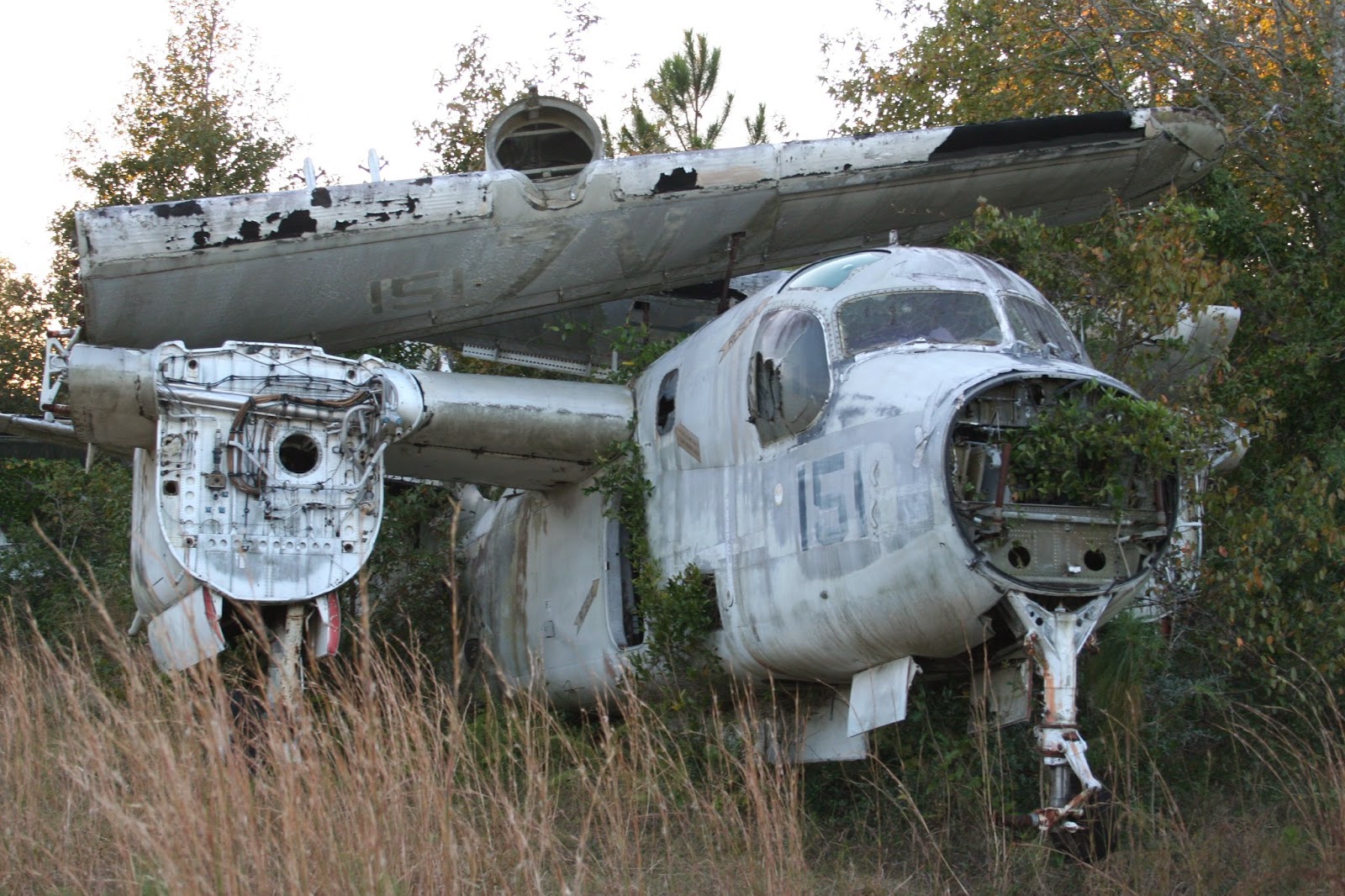 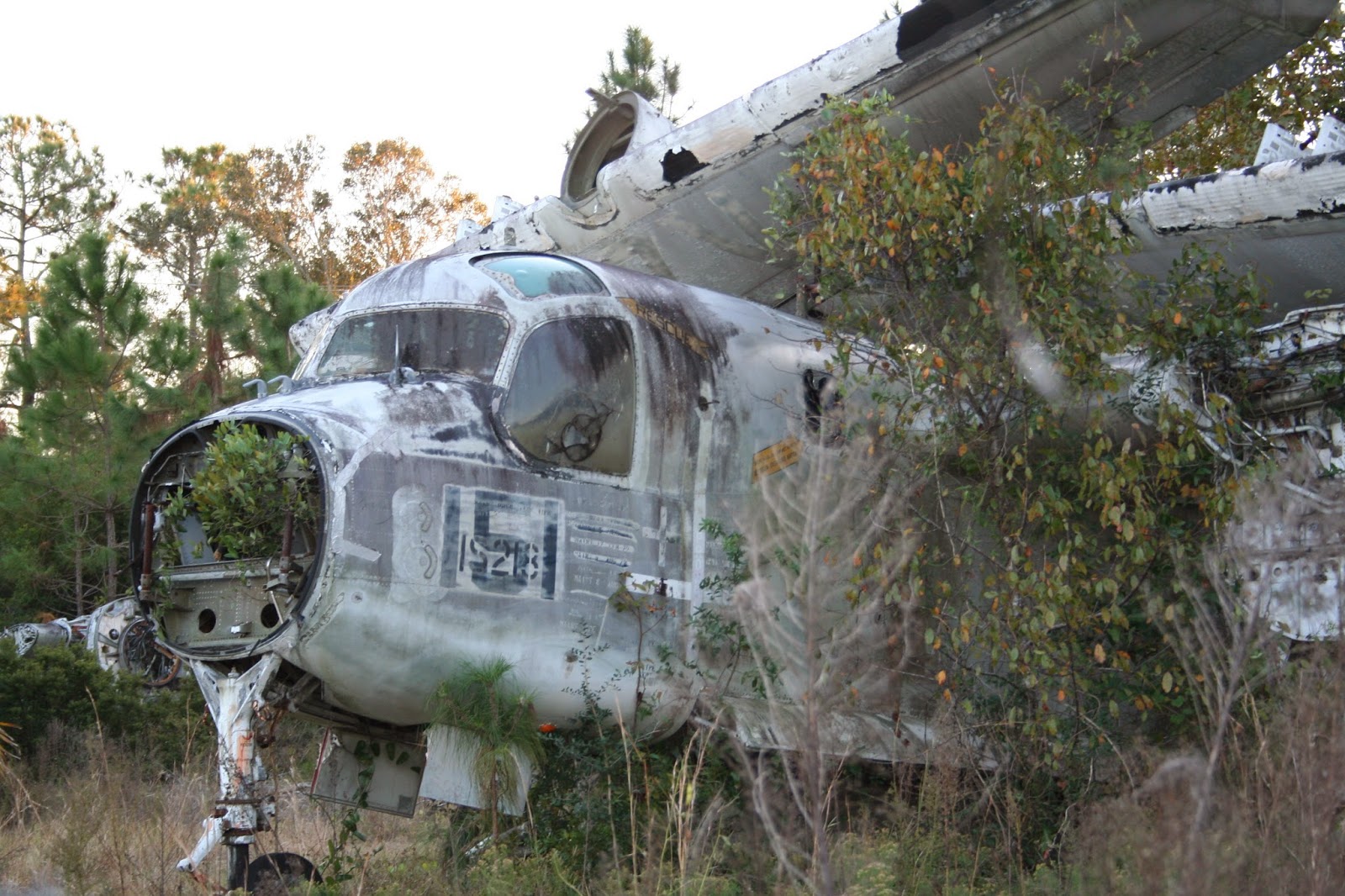 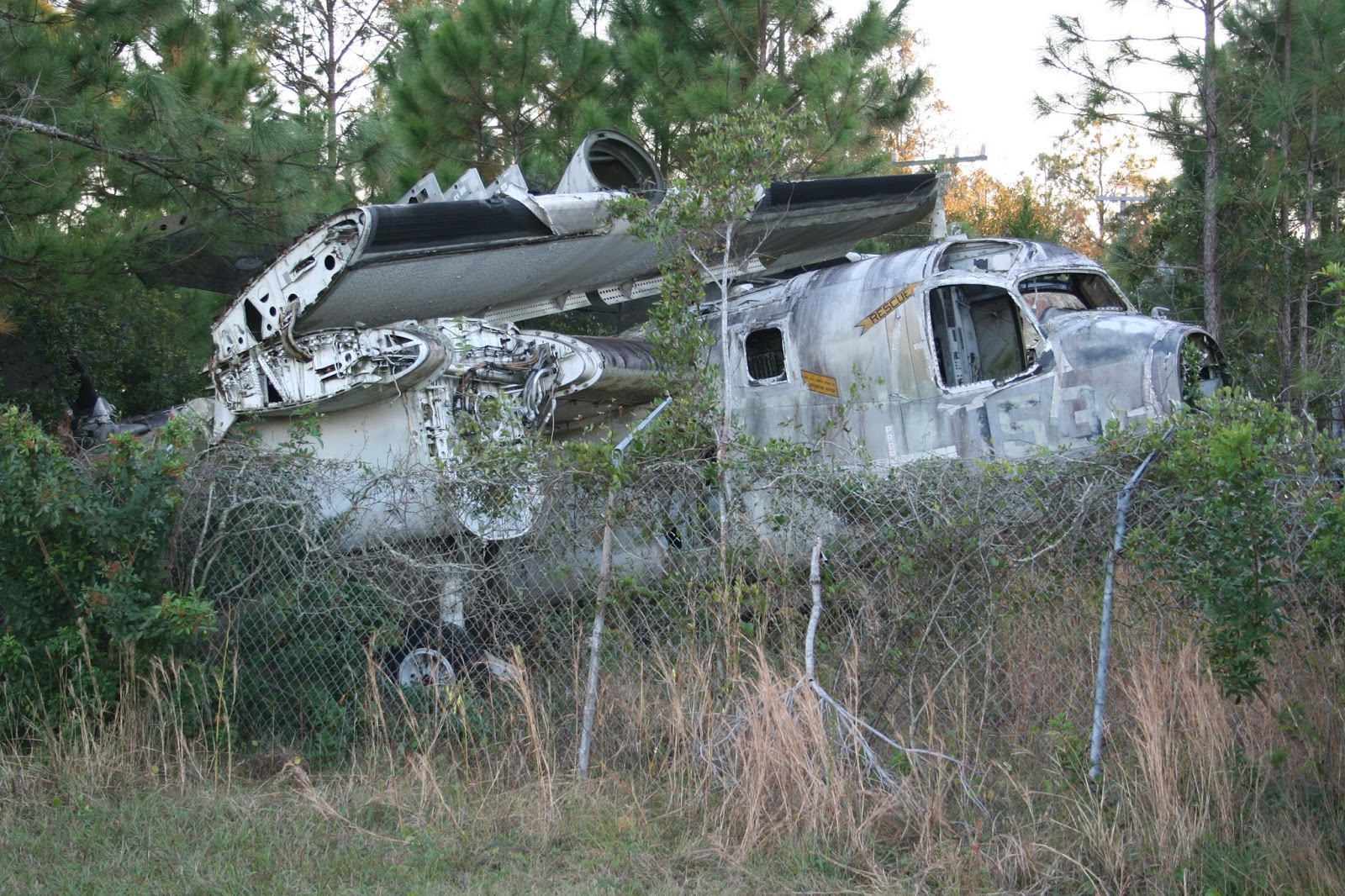 So we roll into in St. Augustine and check into our hotel room just in time to start our ghost tour.  Now, I am not a big believer in ghosts, but it was fun to get to play with one of those stupid EMF detectors that they use on those stupid ghost hunting show. 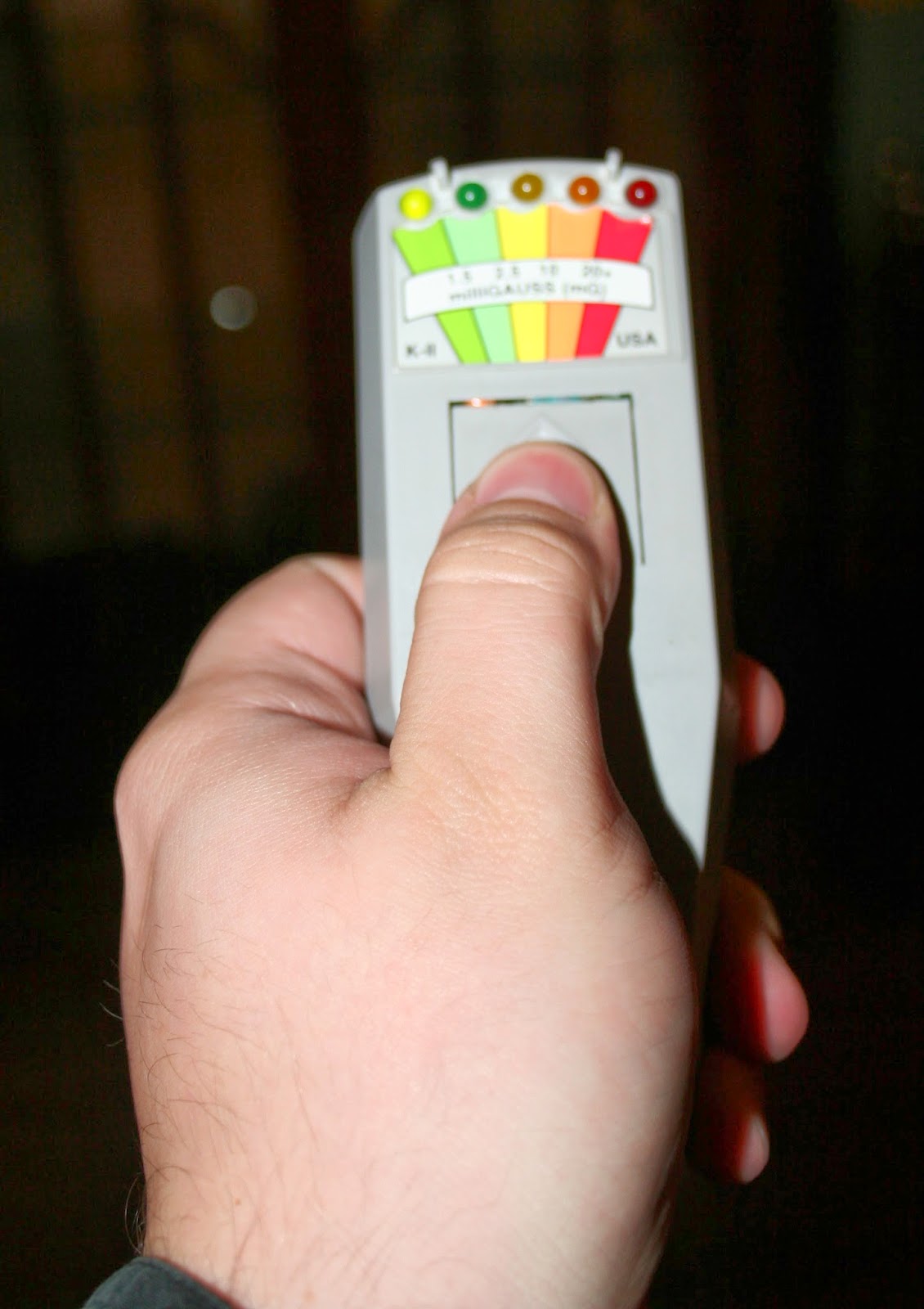 Hey look!  I even found a ghost.  There is an orb in the pictures.  I would go into my tirade on how stupid orbs are, but we have a lot of St. Augustine to cover so just google "orbs".  Now, every major city on the coast offers Ghost tours.  It if generally accepted that Savannah, GA is "The Most Haunted City in America", every other city claims to be number 2.  St. Augustine is no exception.

We finished off the haunted section of our tour with a trip to the St. Augustine Lighthouse where on the lovely show "Ghost Hunters" were they allegedly video taped a cloaked figure running up the stairs. 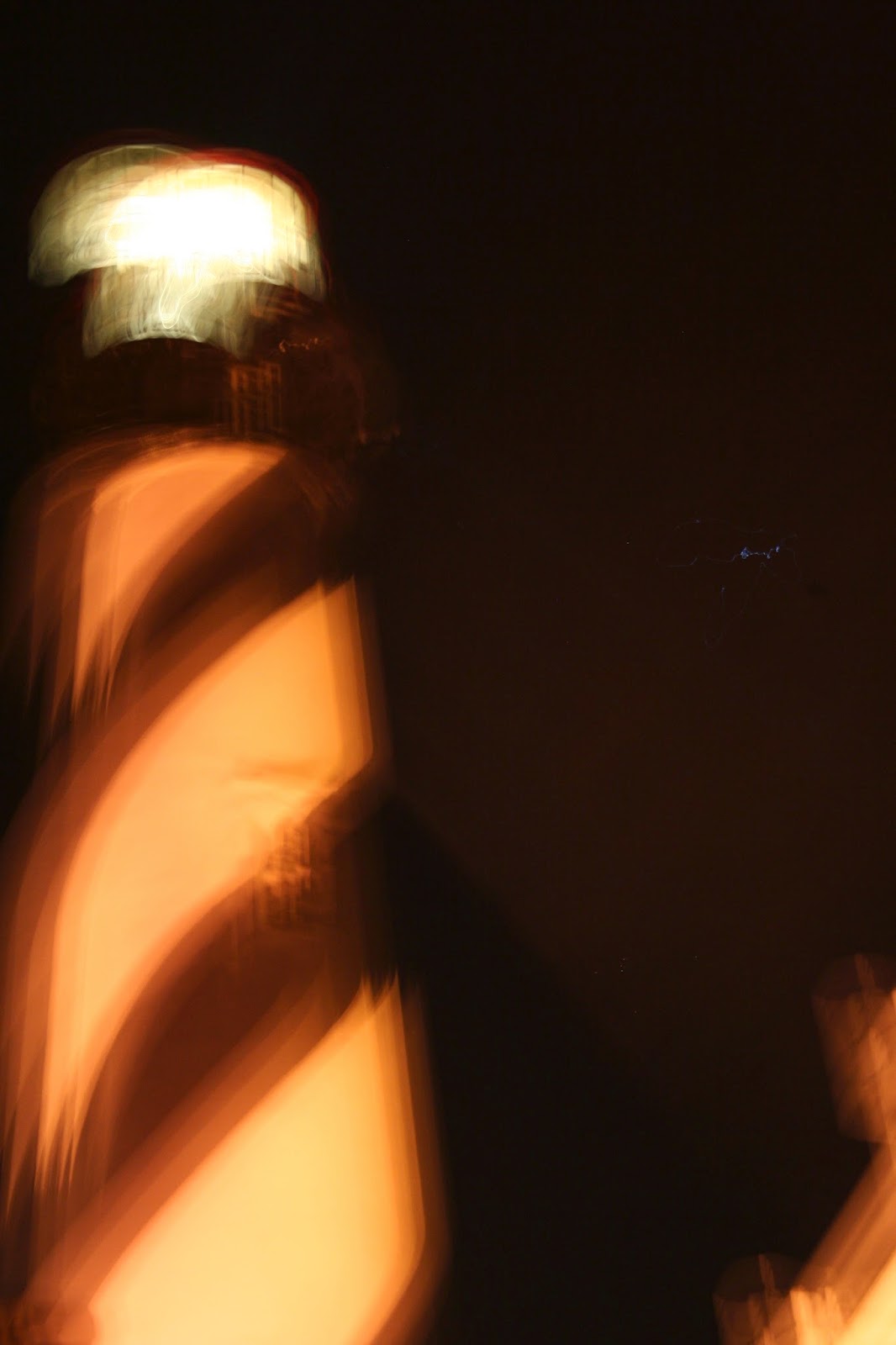 Sadly, because we are in such a hurry, I only had time to take this horrible blurry pictures.  We did not have the time to take the long winding trip to the top.


Waking up bright and early we only had a few hours to see everything St. Augustine, so of course we have to start with St. Augustine's most celebrated attraction: The Fountain of Youth.  I have covered my time there PREVIOUSLY. 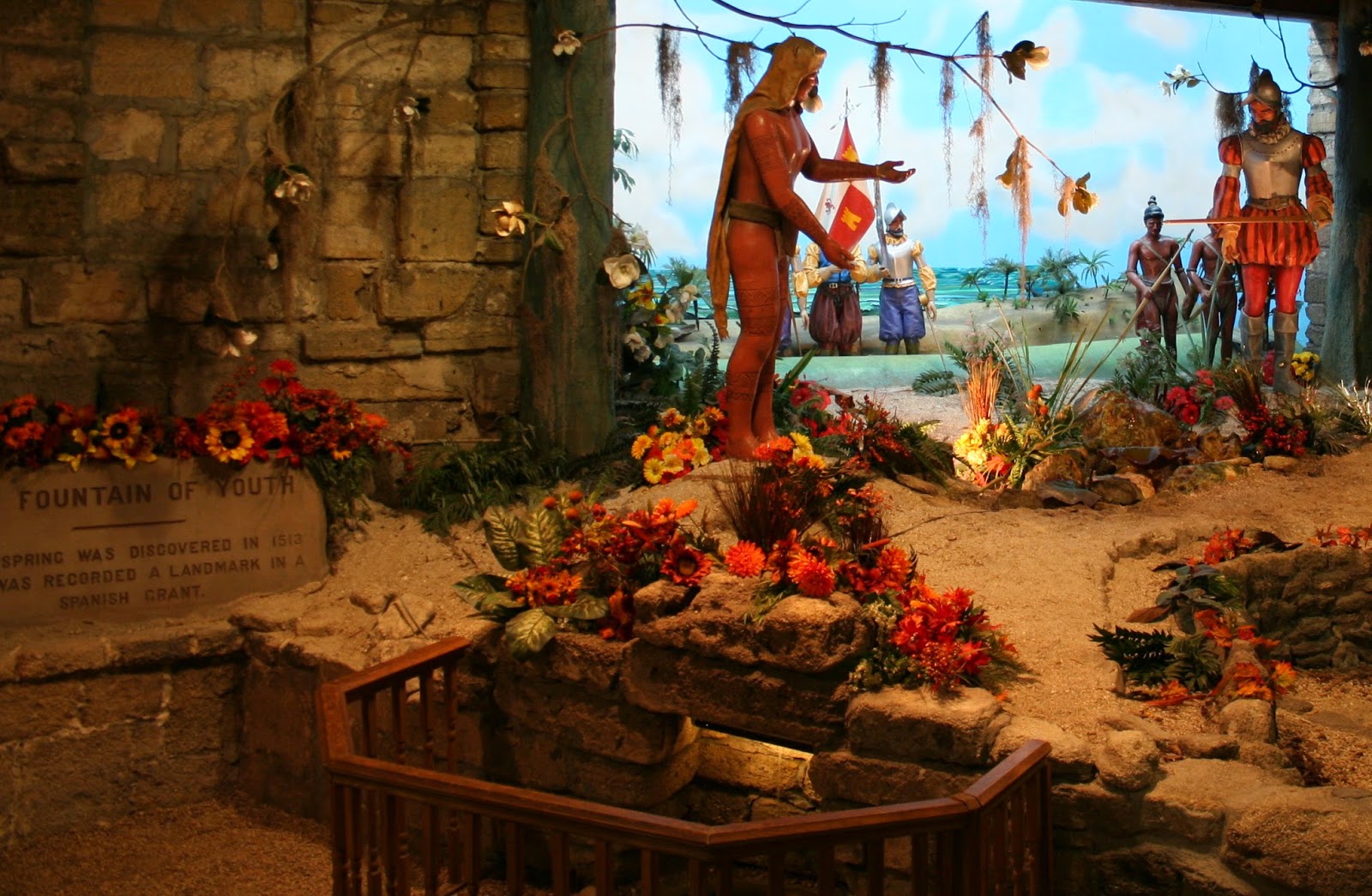 So we sip our nasty tasting water and head on our way to The Old Jail.  The Old St. Augustine Jail was built in 1891, by Henry Flagler, the billionaire that created Florida. 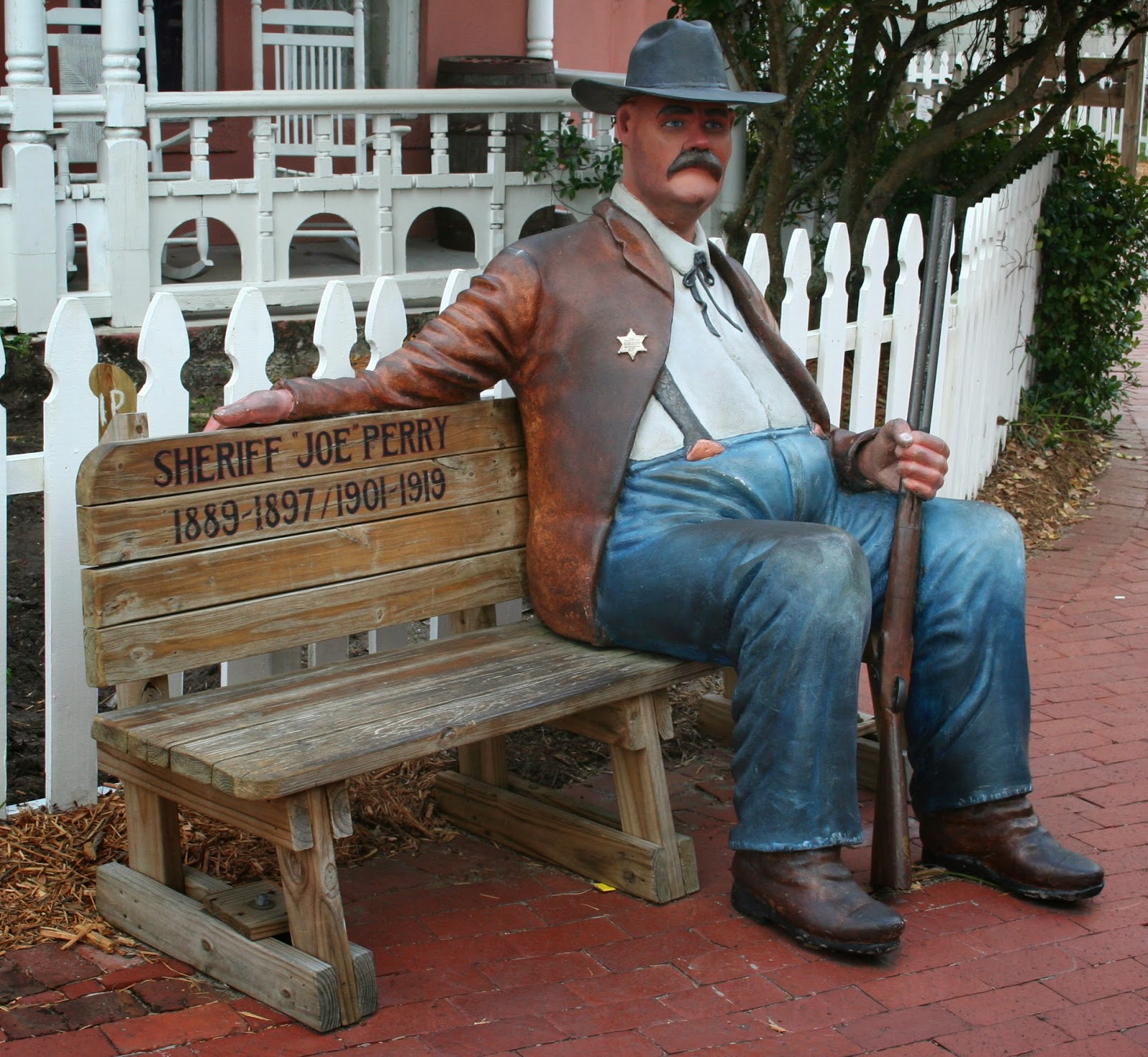 Outside you can have your picture taken with a facsimile of Sheriff Joe Perry. 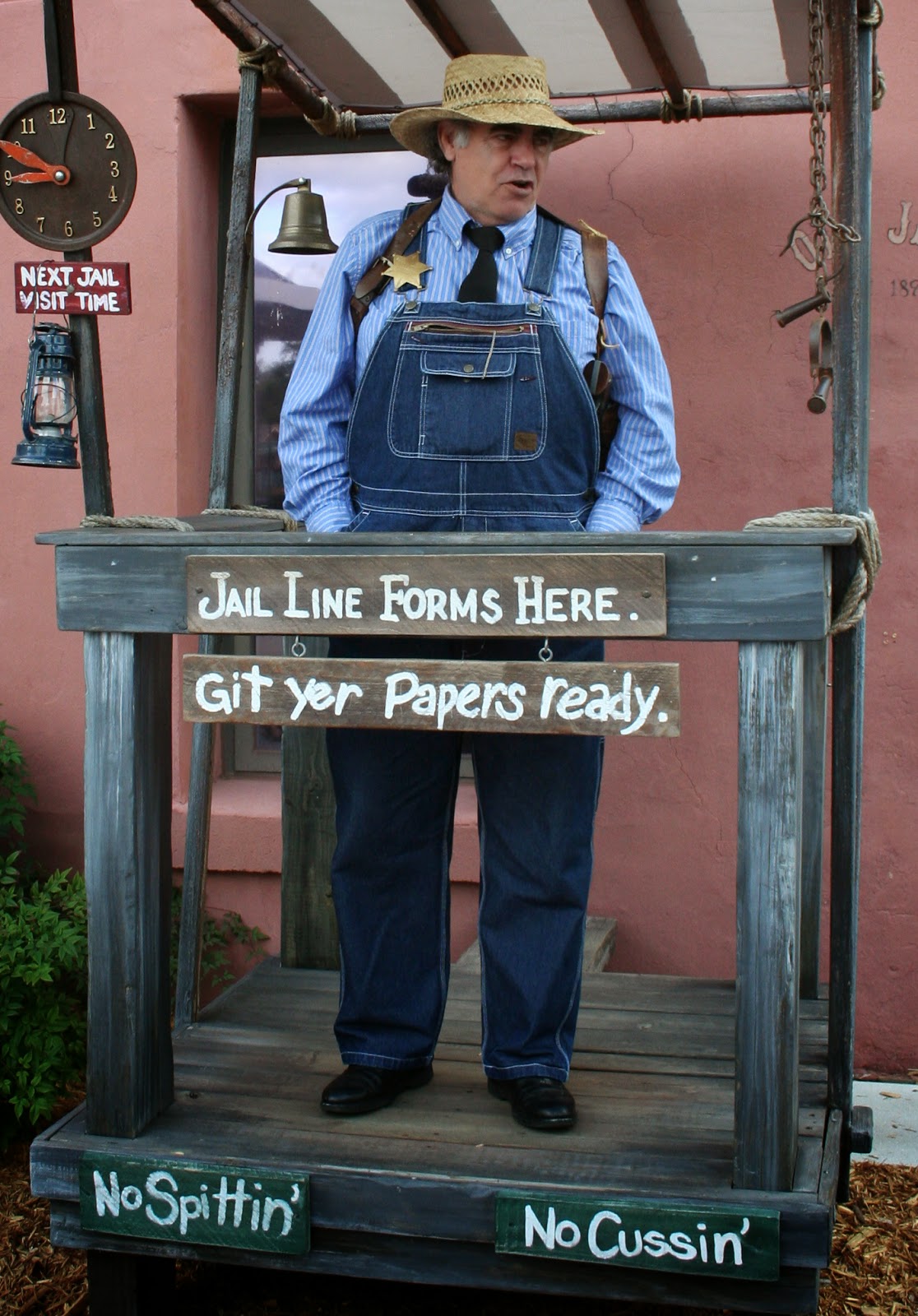 As the tour is about to begin a man in a straw hat and a sheriff badge emerges and starts shouting at you and talking to you like you are are dirt.  So begins the charming tour through the old Jail, which gives you the experience of being talked to like inmate.

In between yelling at you the Sheriff shows off the amenities of the jail such as the bird cage. 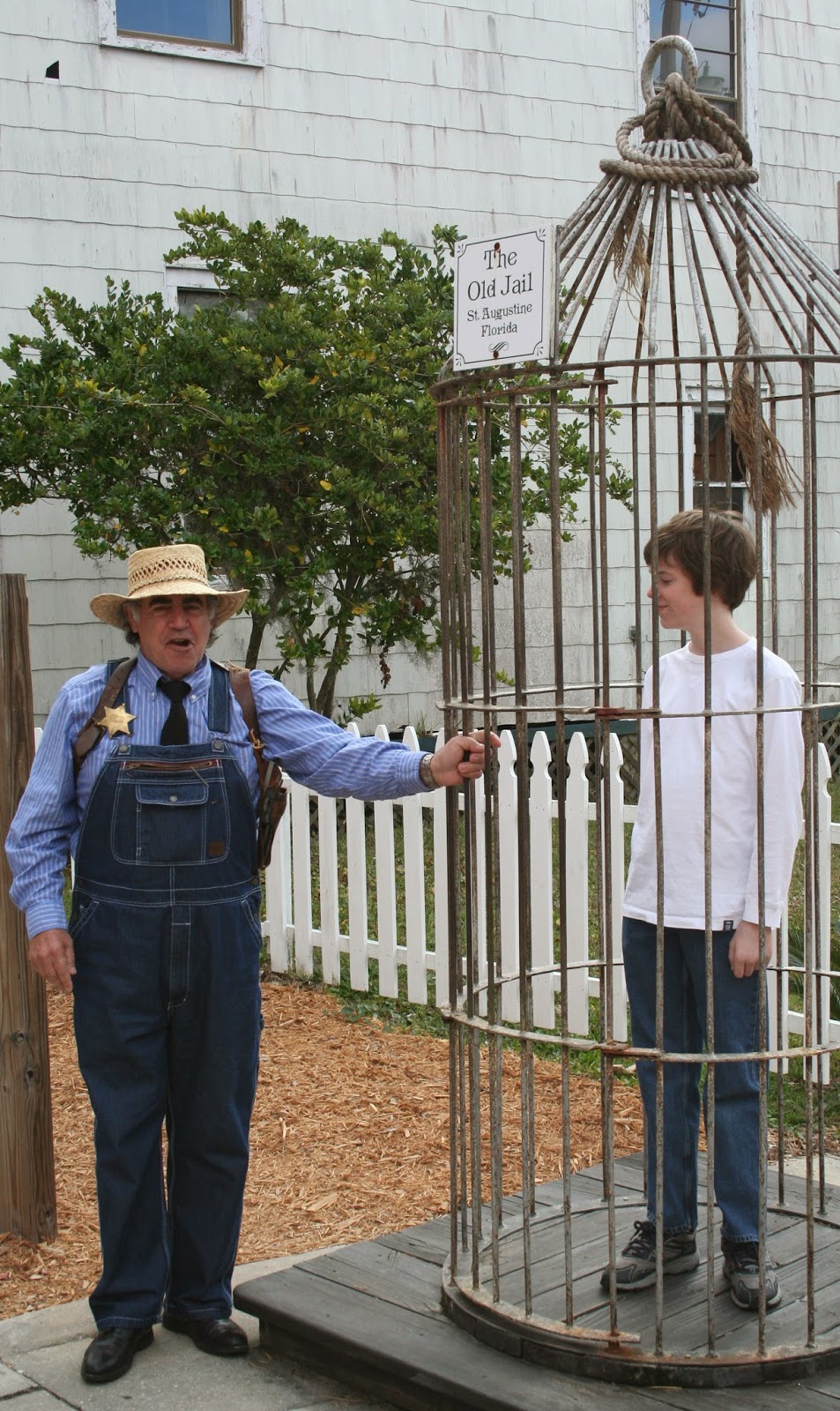 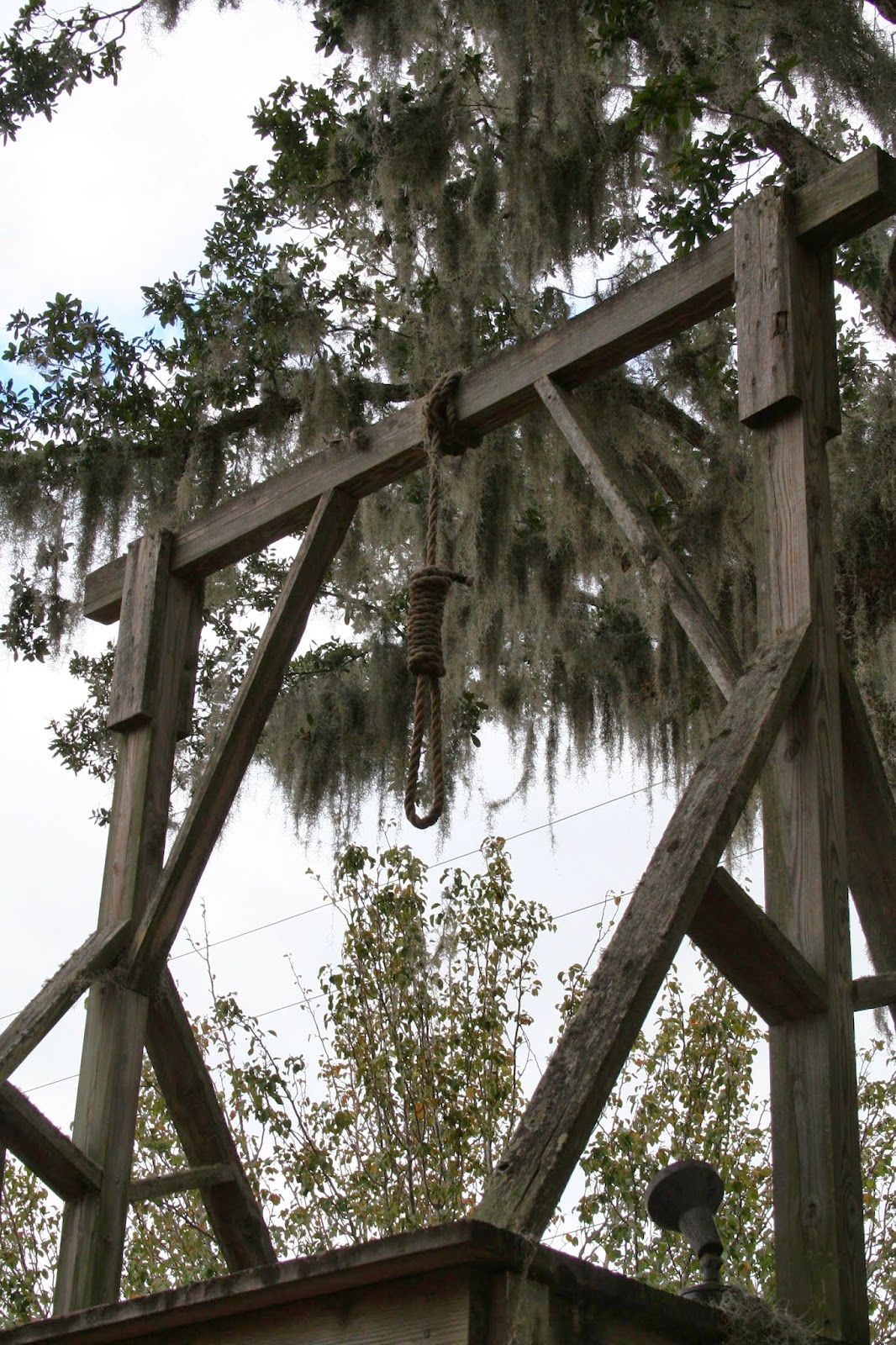 And of course they they have the tourist photo ops that you expect from your tourist attractions. 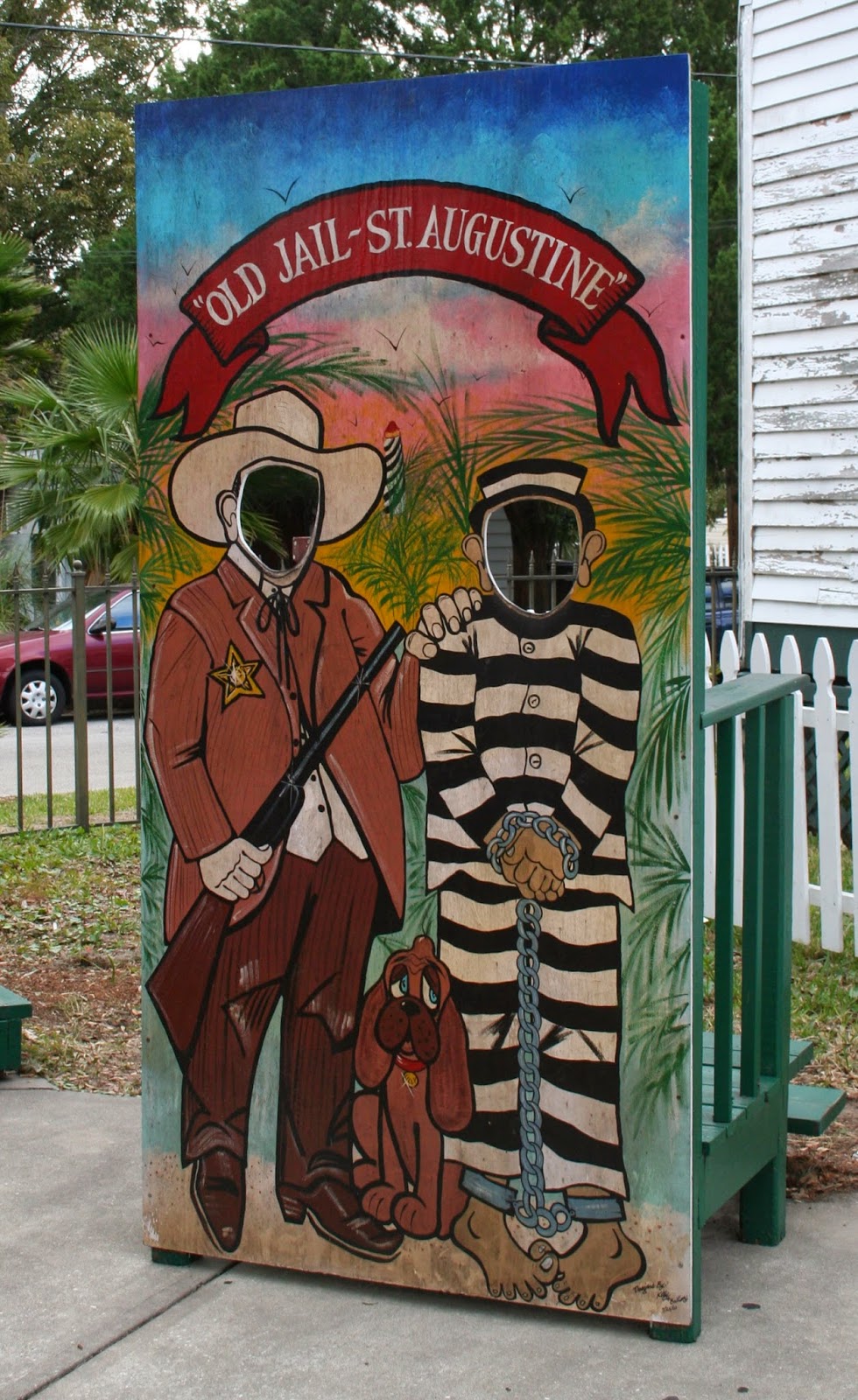 Finally the Sheriff takes you into the jail for the grand tour.  They start in the "dungeon" where you get to see family friendly scenes such as these..... 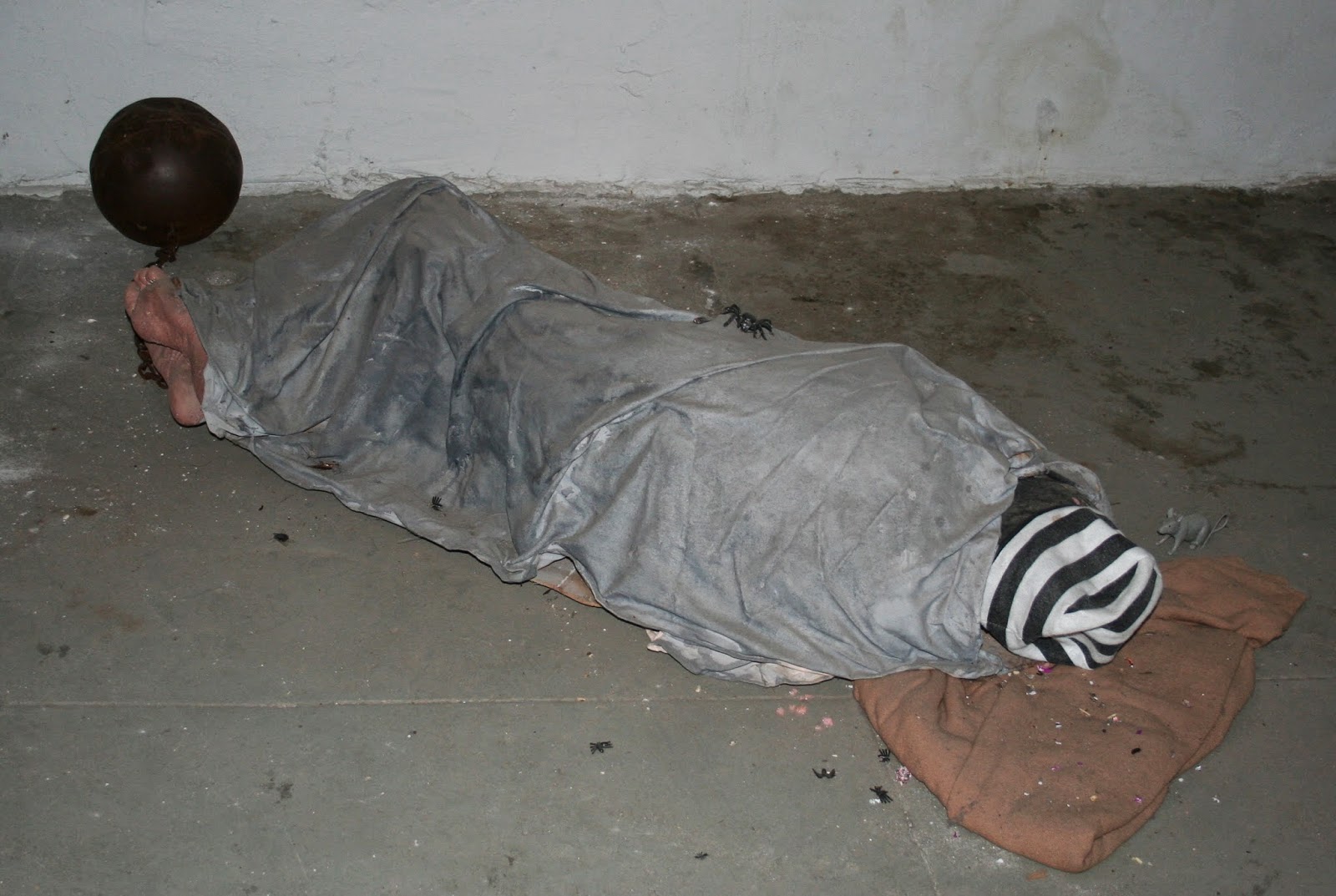 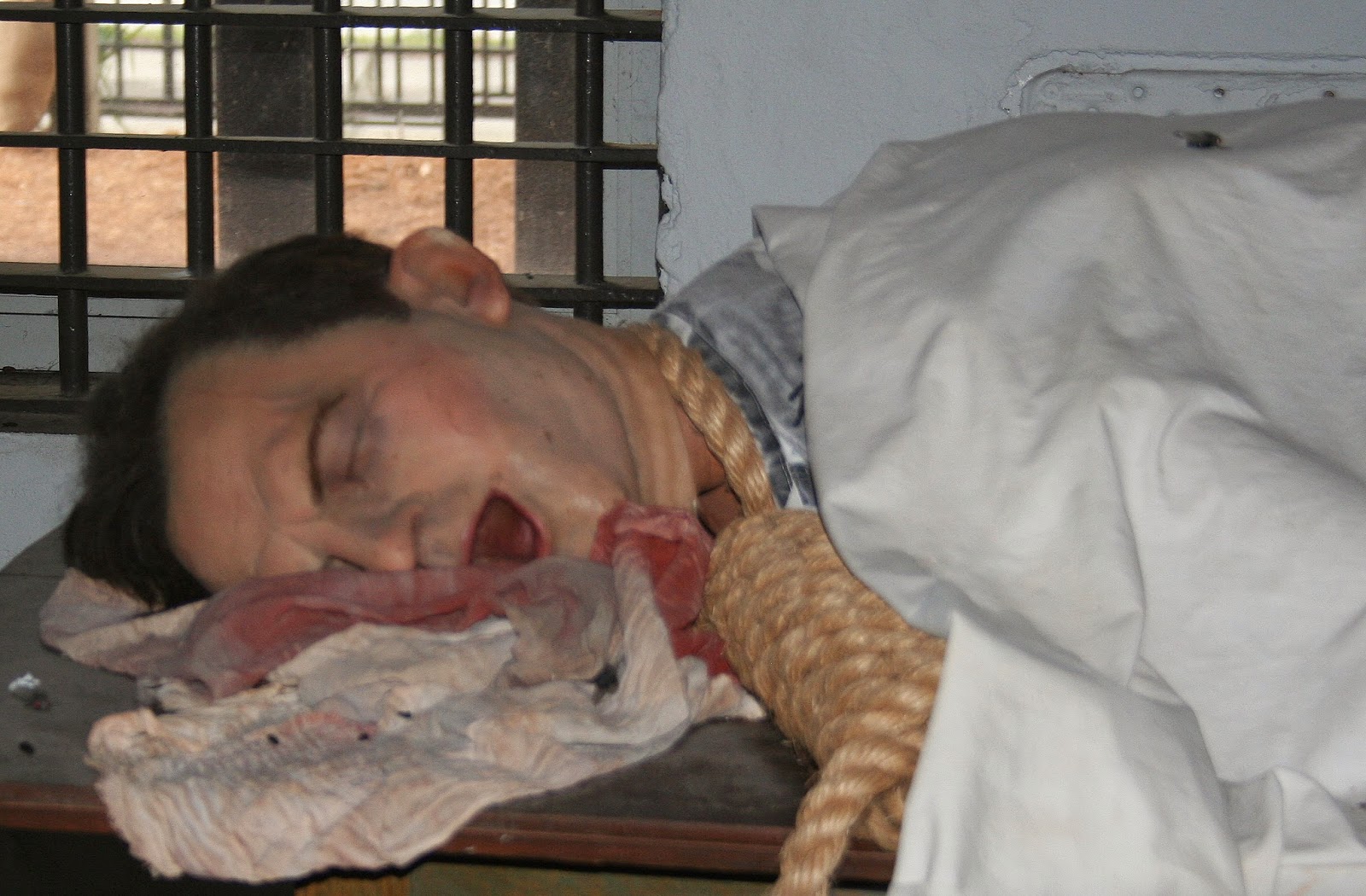 The tour is short, but amusing, with emphasis on hos shitty the conditions of the jail were.  This is highlighted by the mannequins shoved into the ridiculously small cells. 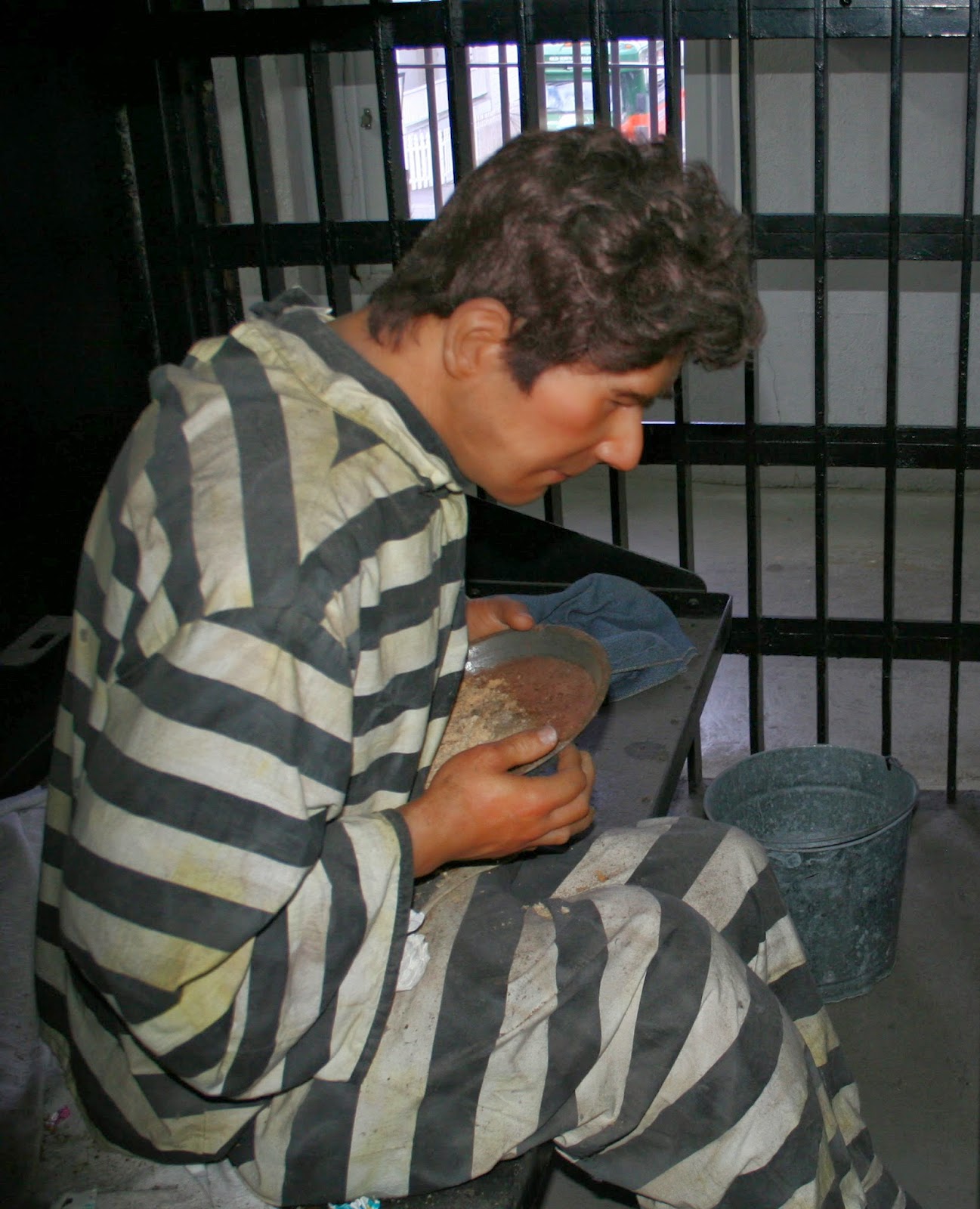 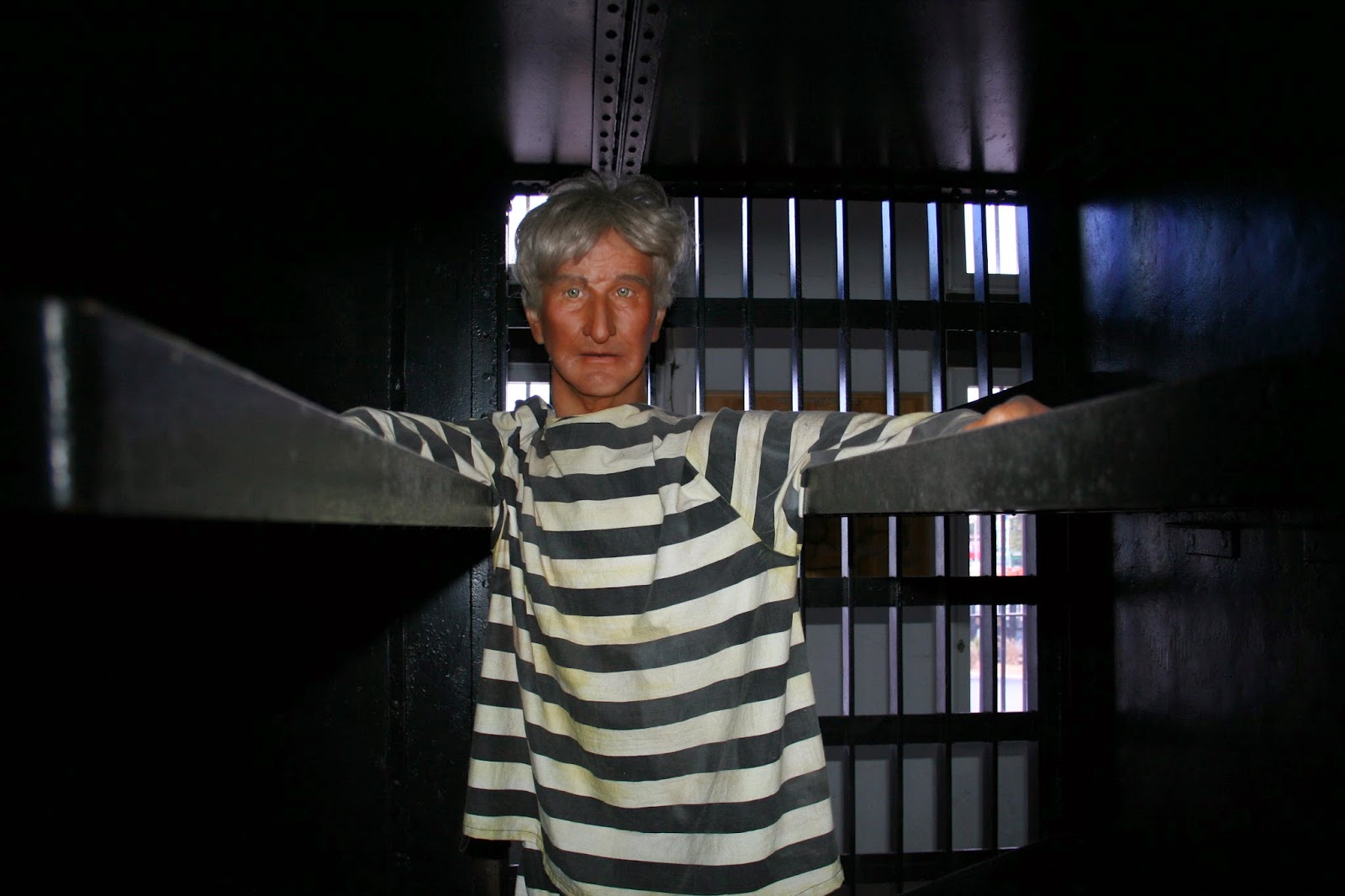 The tour is concluded when the wax figure of Sheriff Joe Perry suddenly starts moving and talking and reveals himself to be a freaky animatronic. 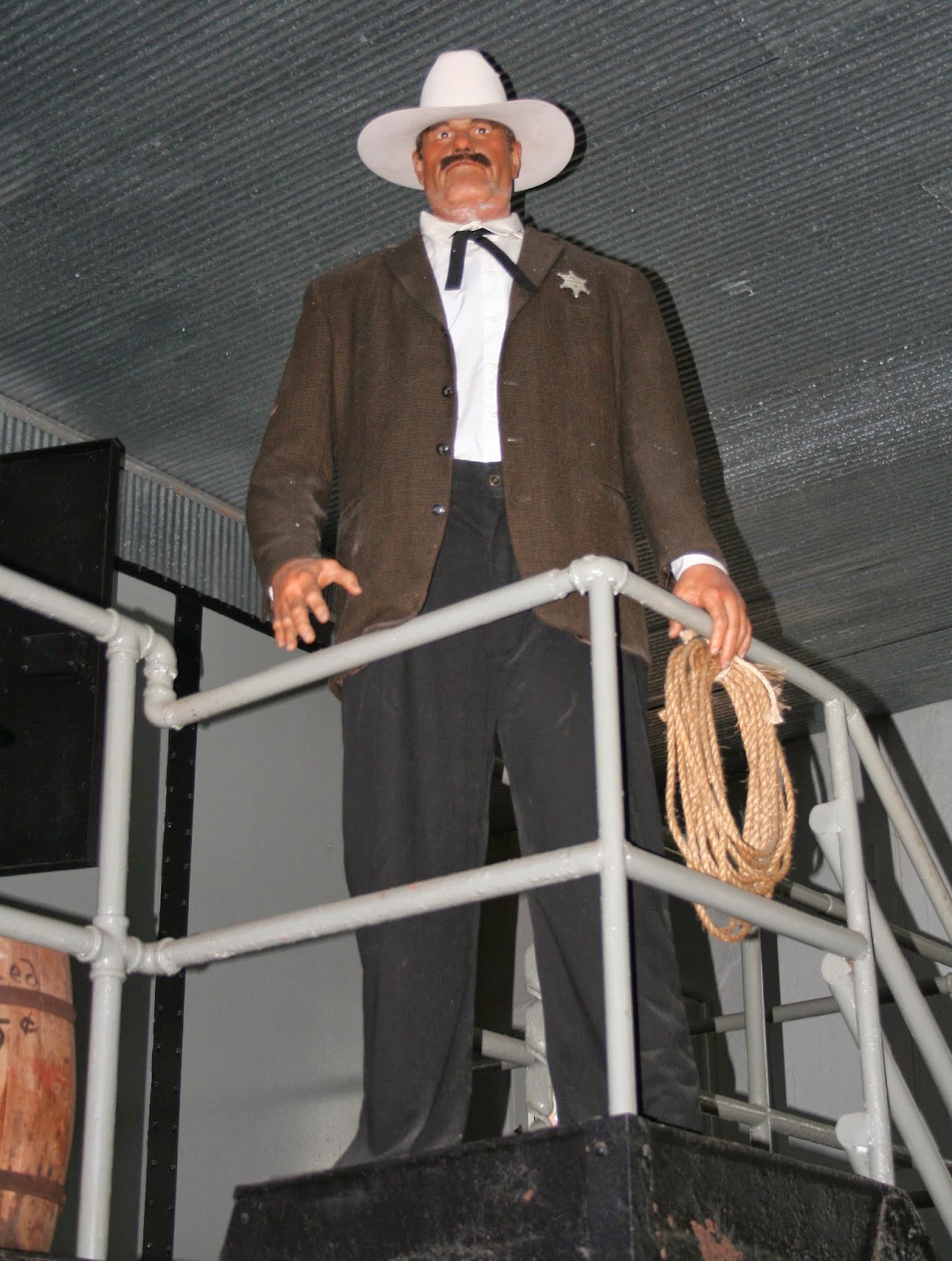 So, now we are running REALLY low on time.  As we peeled down the strip blowing past the largest cross in Florida so fast I didn't even get a picture, we notice a big castley thing. 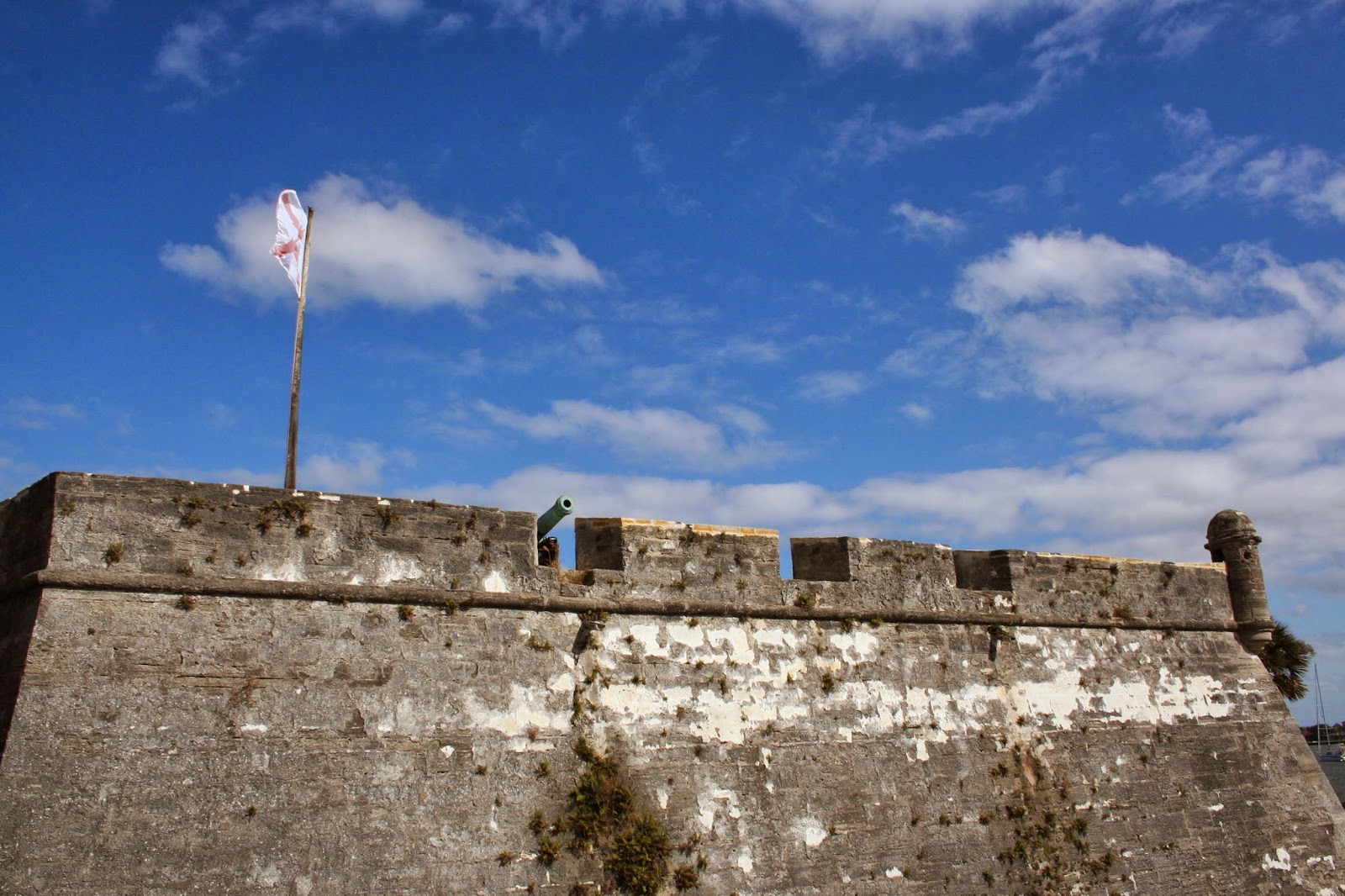 So we pull over, pay 10 bucks to spend literally ten minutes inside.  It was full of canons and guys dressed like revolutionary soldiers. 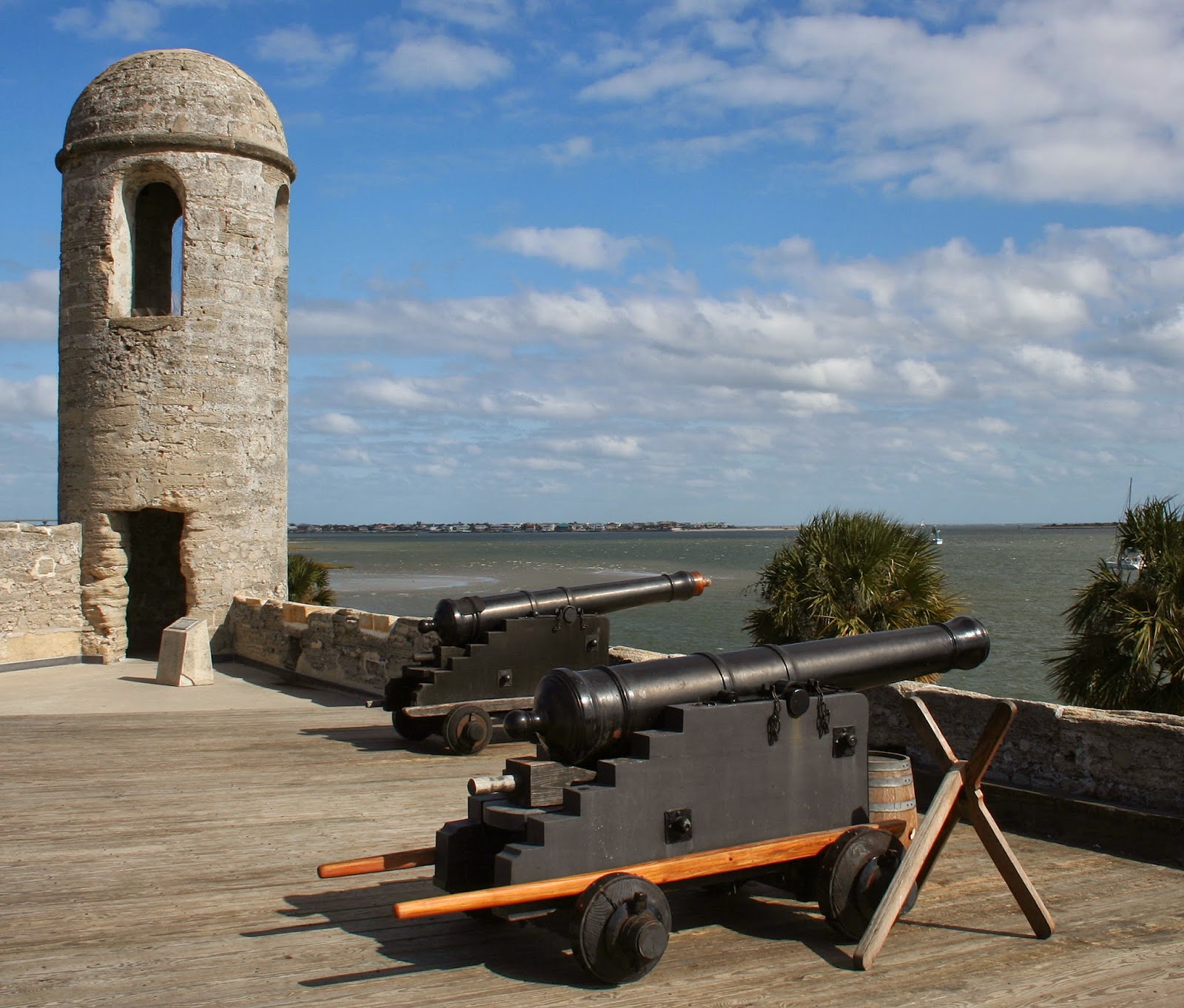 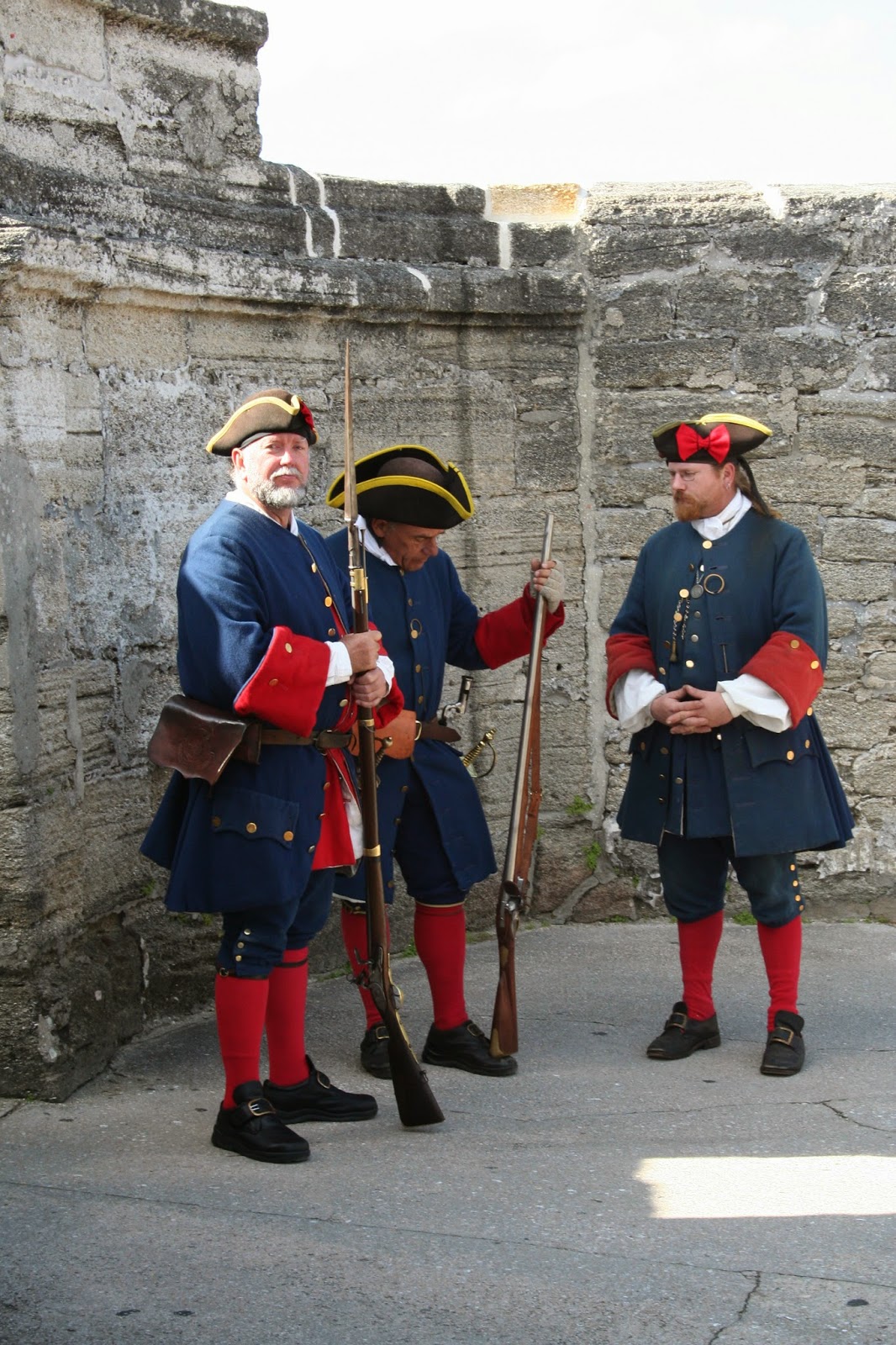 Later research concluded that we were inside the famous "Castillo de San Marcos".  The oldest fort in the United States.  My lack of time spent in the Castillo is not a criticism of the attraction, I really was in that much of a hurry.

You see, in St. Augustine, everything is the oldest something.  So our next stop is fittingly the Oldest Wooden School House in America! 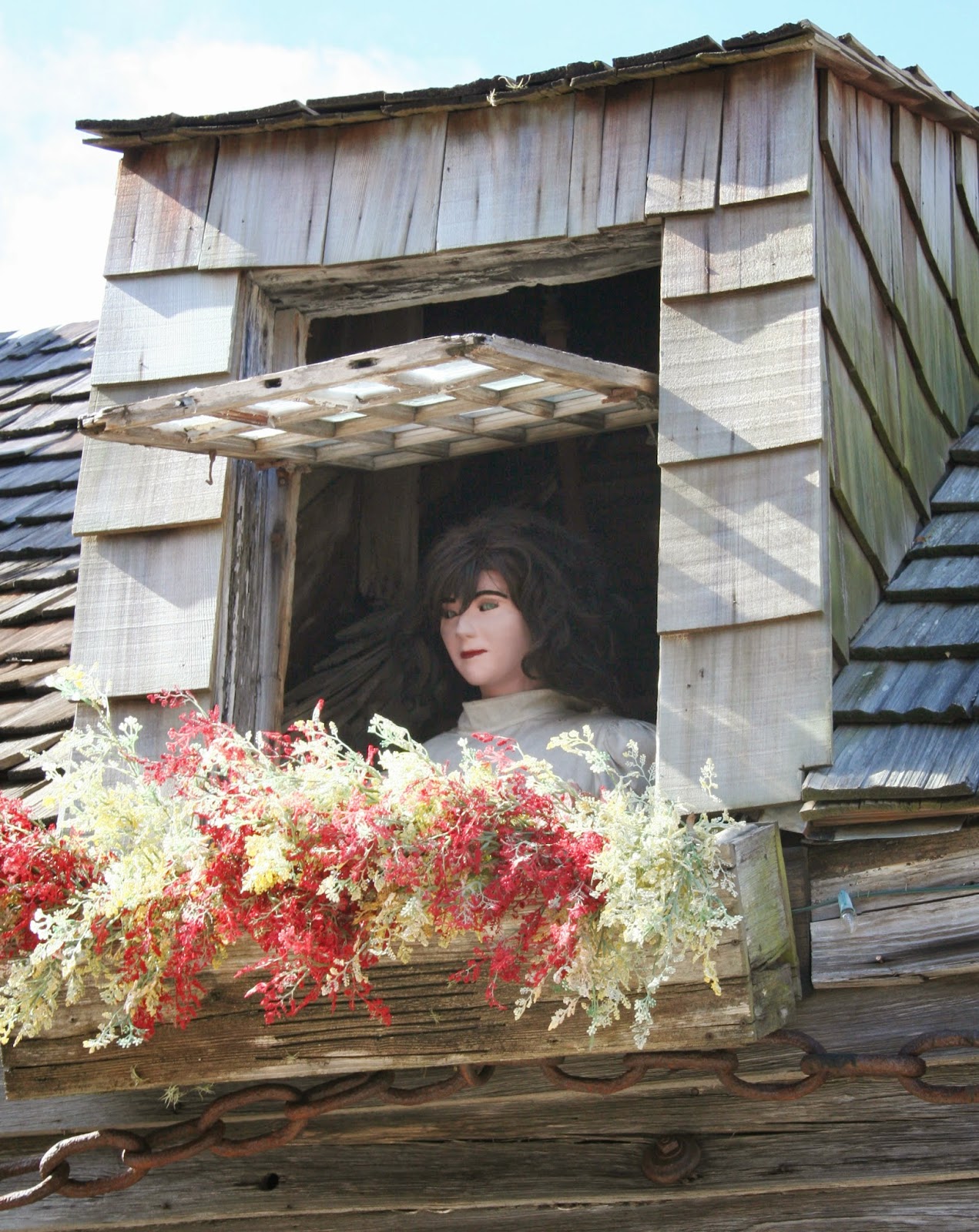 Now, we were really really short on time by this point, so luckily, it was only a one room school house.  However, they did succeed in packing a lot of creepiness in one room.  Check out these ghoulish children. 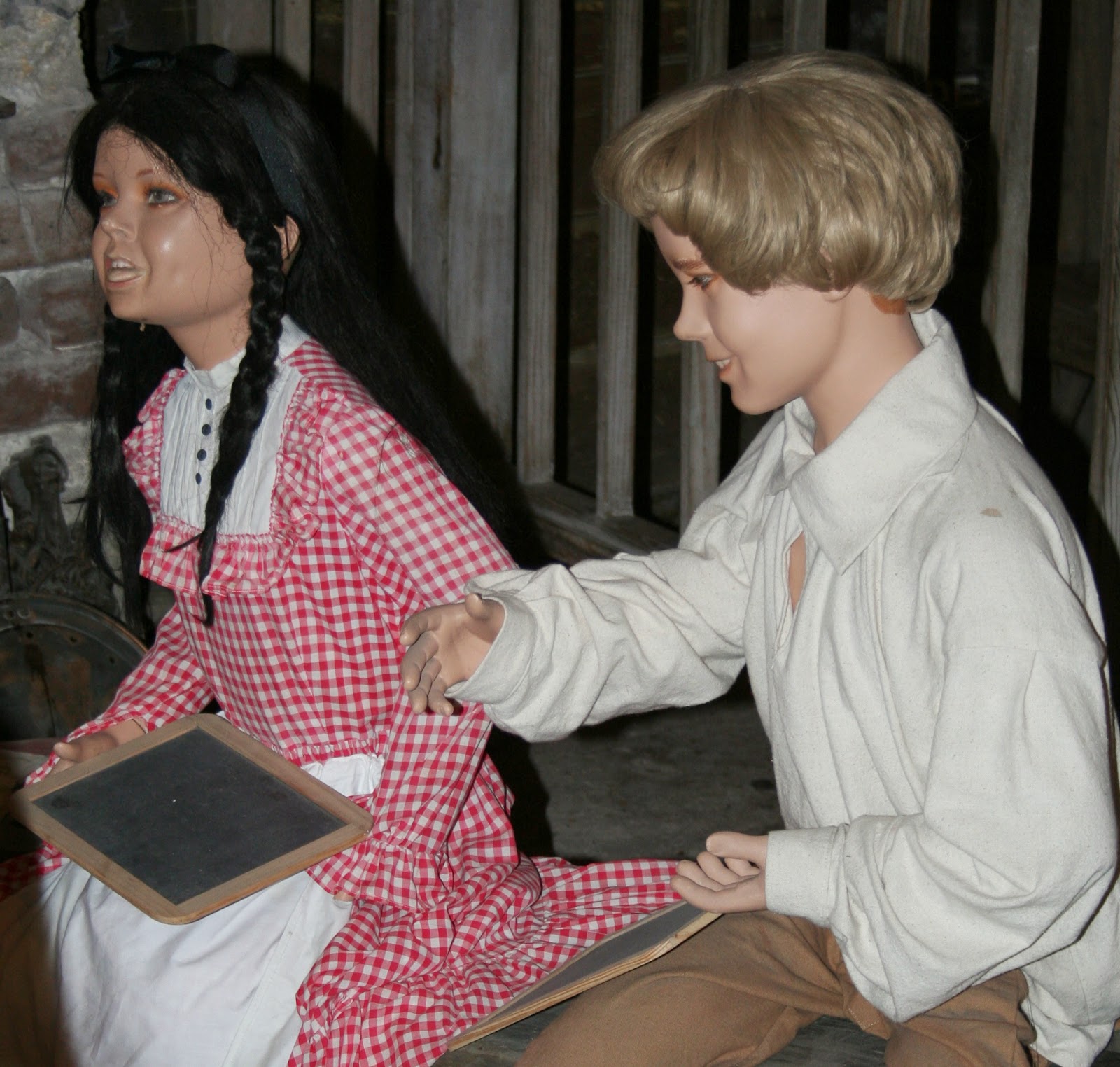 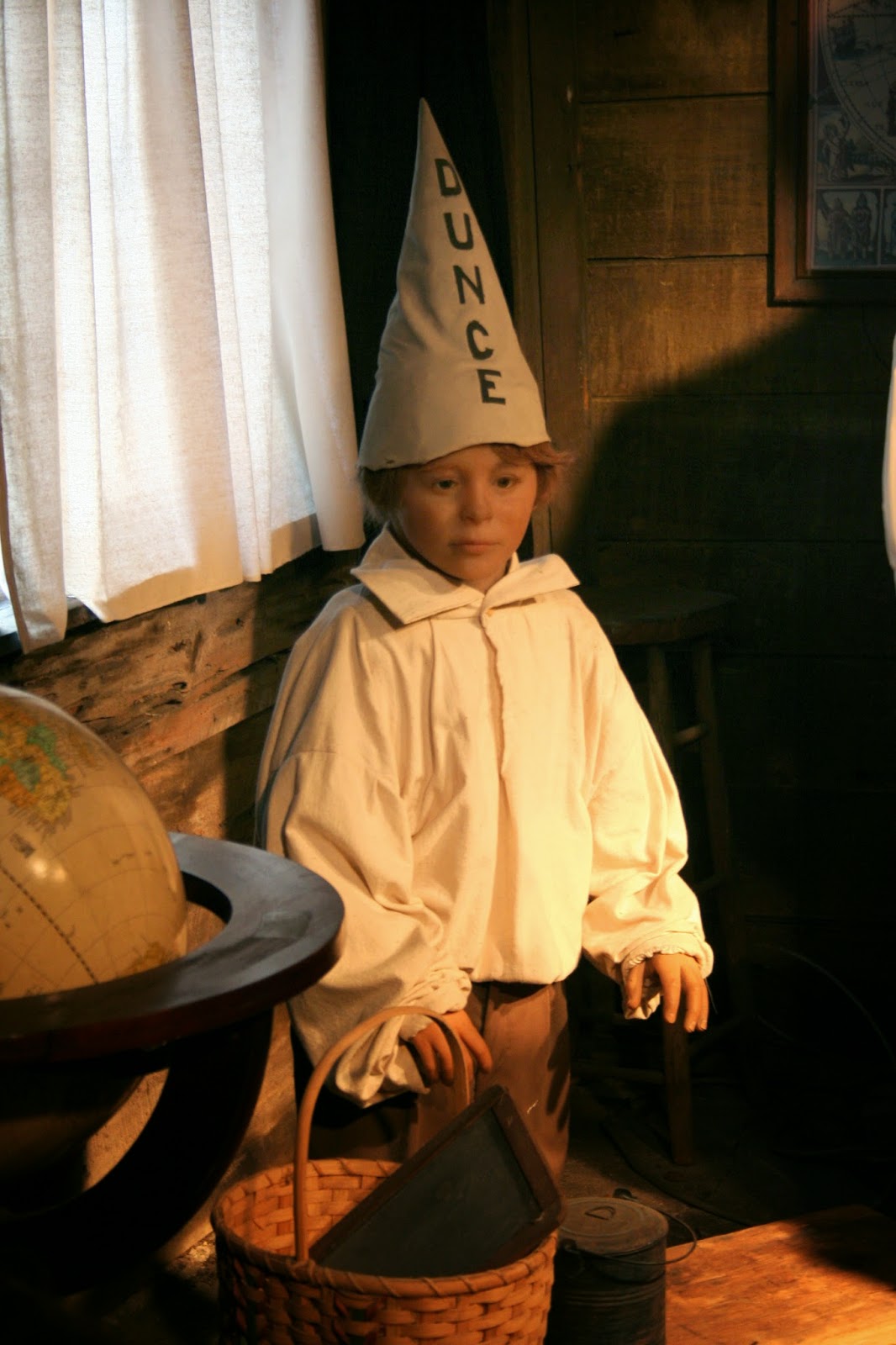 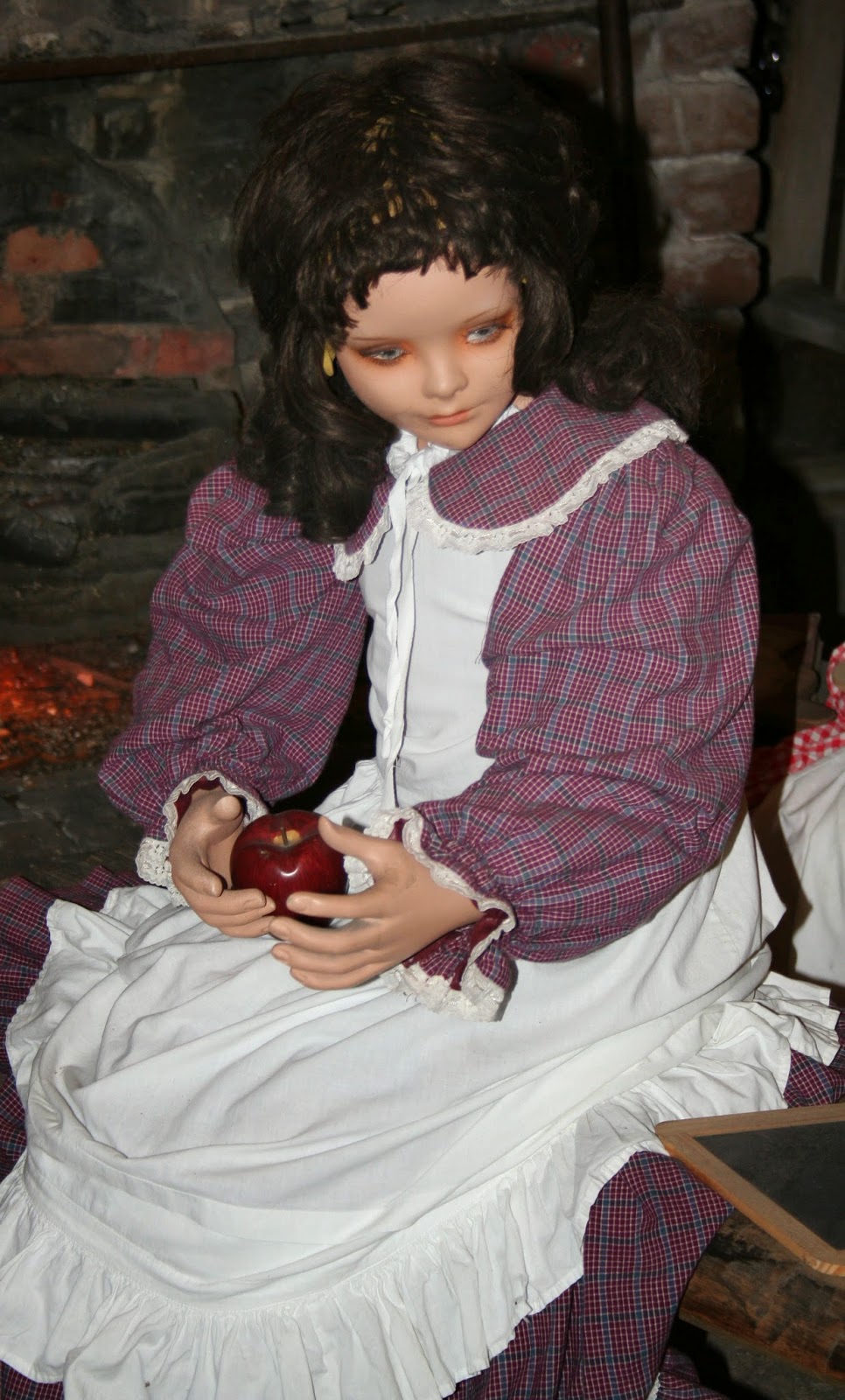 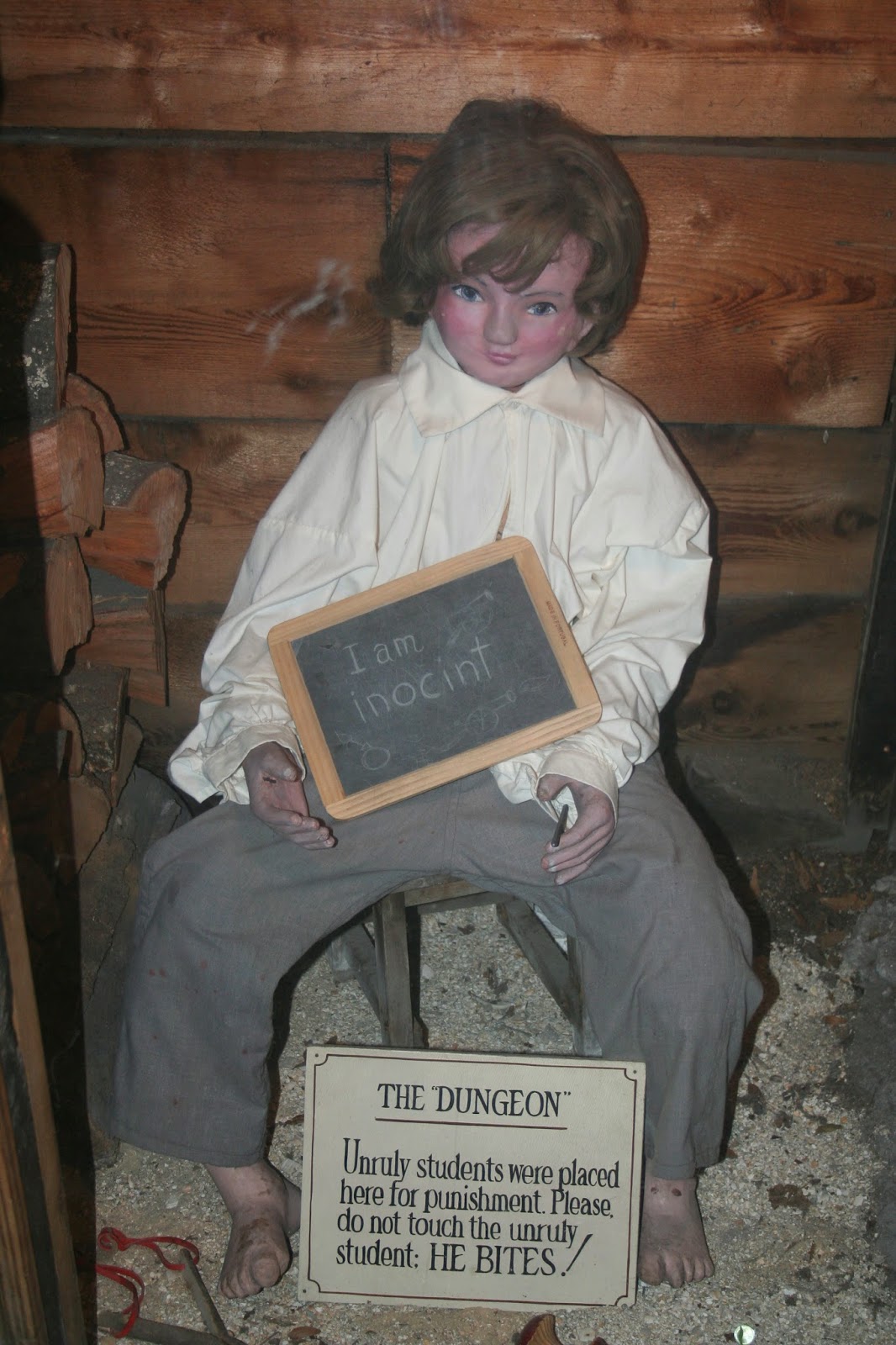 And let's not forget their ghoulish teacher..... 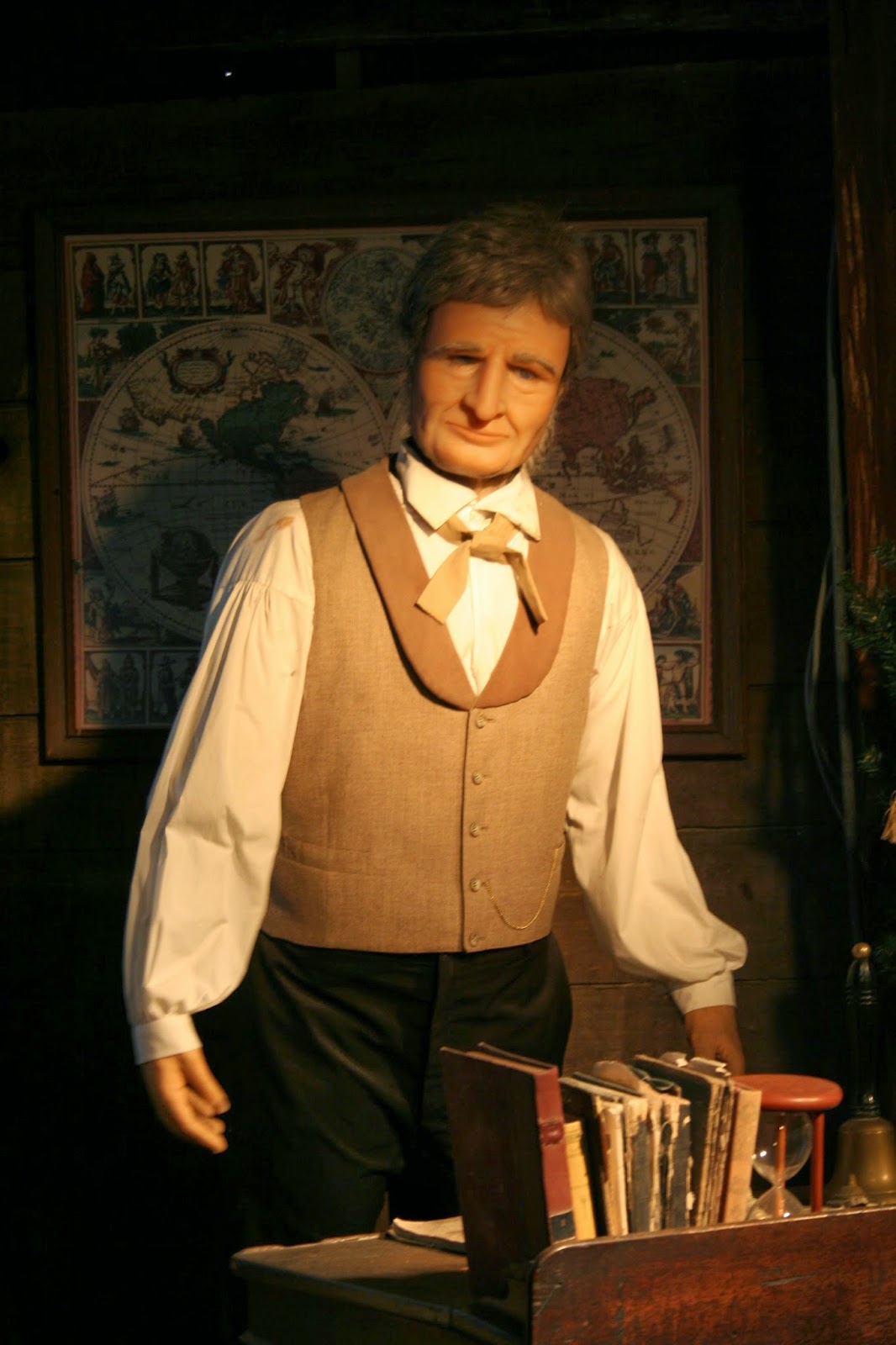 And so concluded my extremely rushed tour of St. Augustine.  We were in such a hurry, I actually missed out on the countries OLDEST Wax Museum on my first trip through.

Of course I have to mention this awesome Motel. 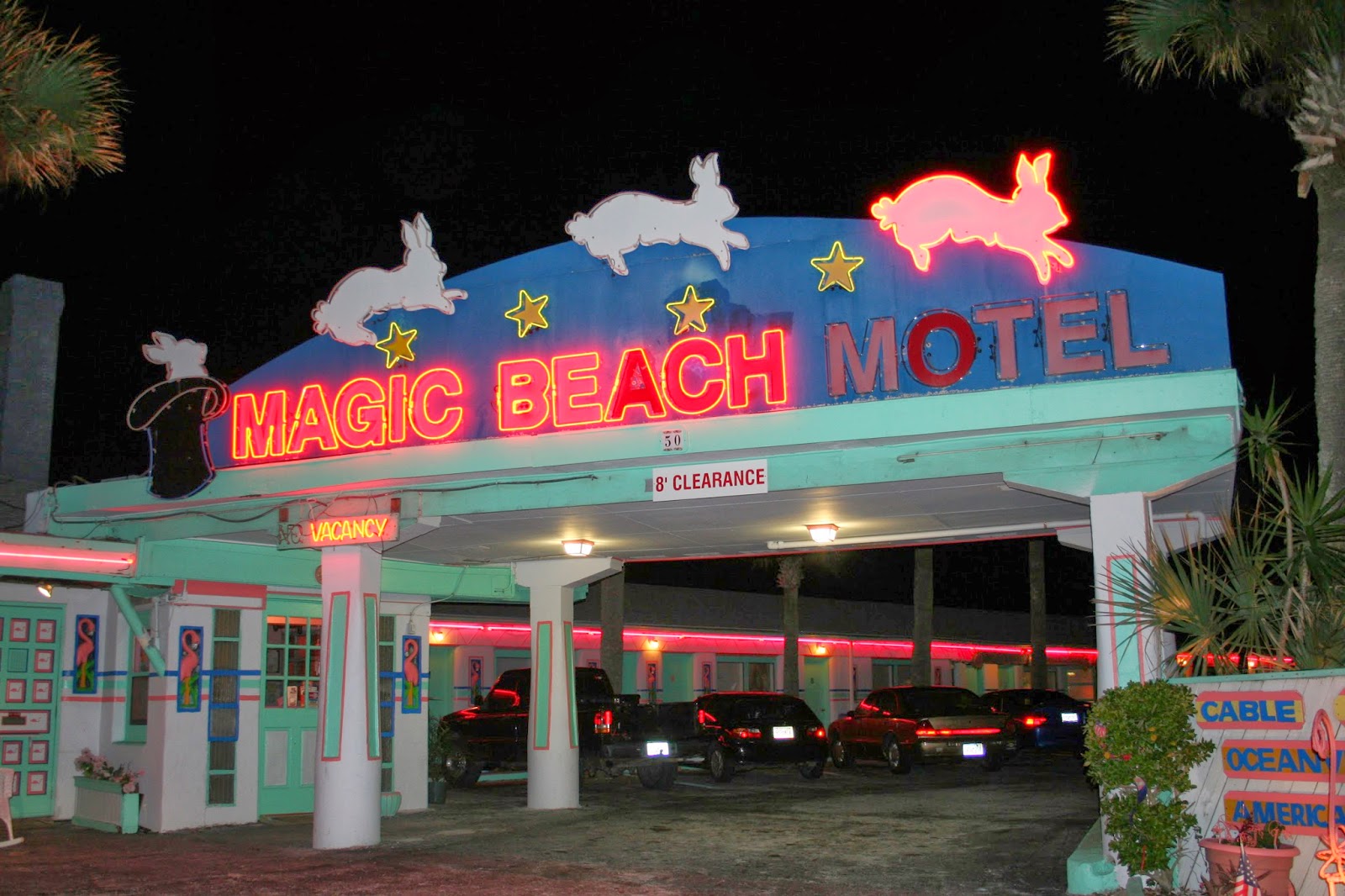 The sign was actually built in the 90s for use in a TV show about a magician that owned a Motel.