The Fountain of Youth

Who the hell is Pounce De Leon?  We have all heard the name, we know that he has something to do with Florida and he was searching for the Fountain of Youth.

We could talk about the "truth" behind Pounce De Leon, but that takes the fun out of everything.  Trust me, don't google him.

Here is a wax figure of Pounce seen at Potter's Wax Museum. 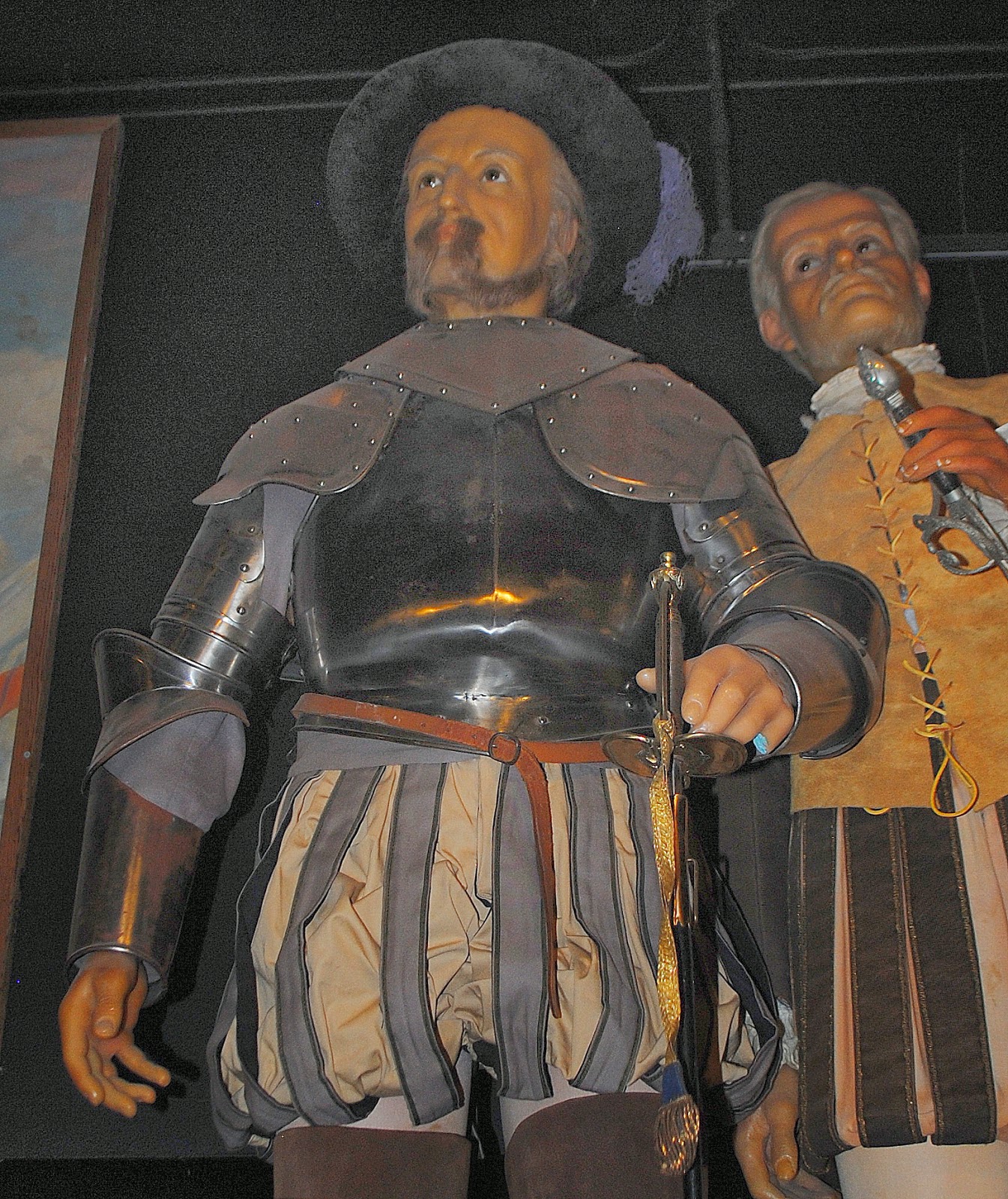 What is important is that Pounce was a Spanish Conquistador who had one goal in life: To find the Fountain of Youth.  And guess what.........He found it.  If you doubt this claim, how do you explain this? 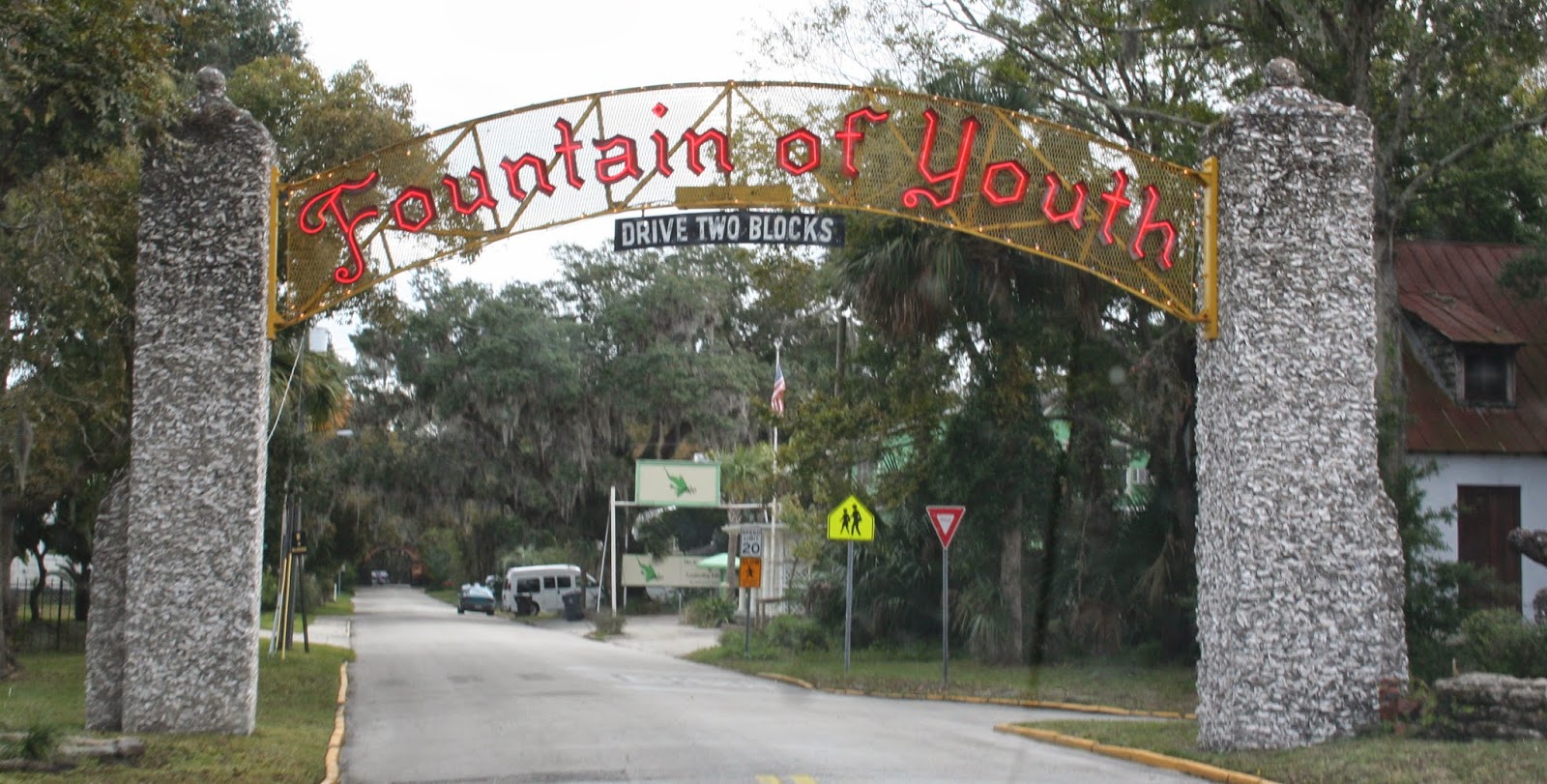 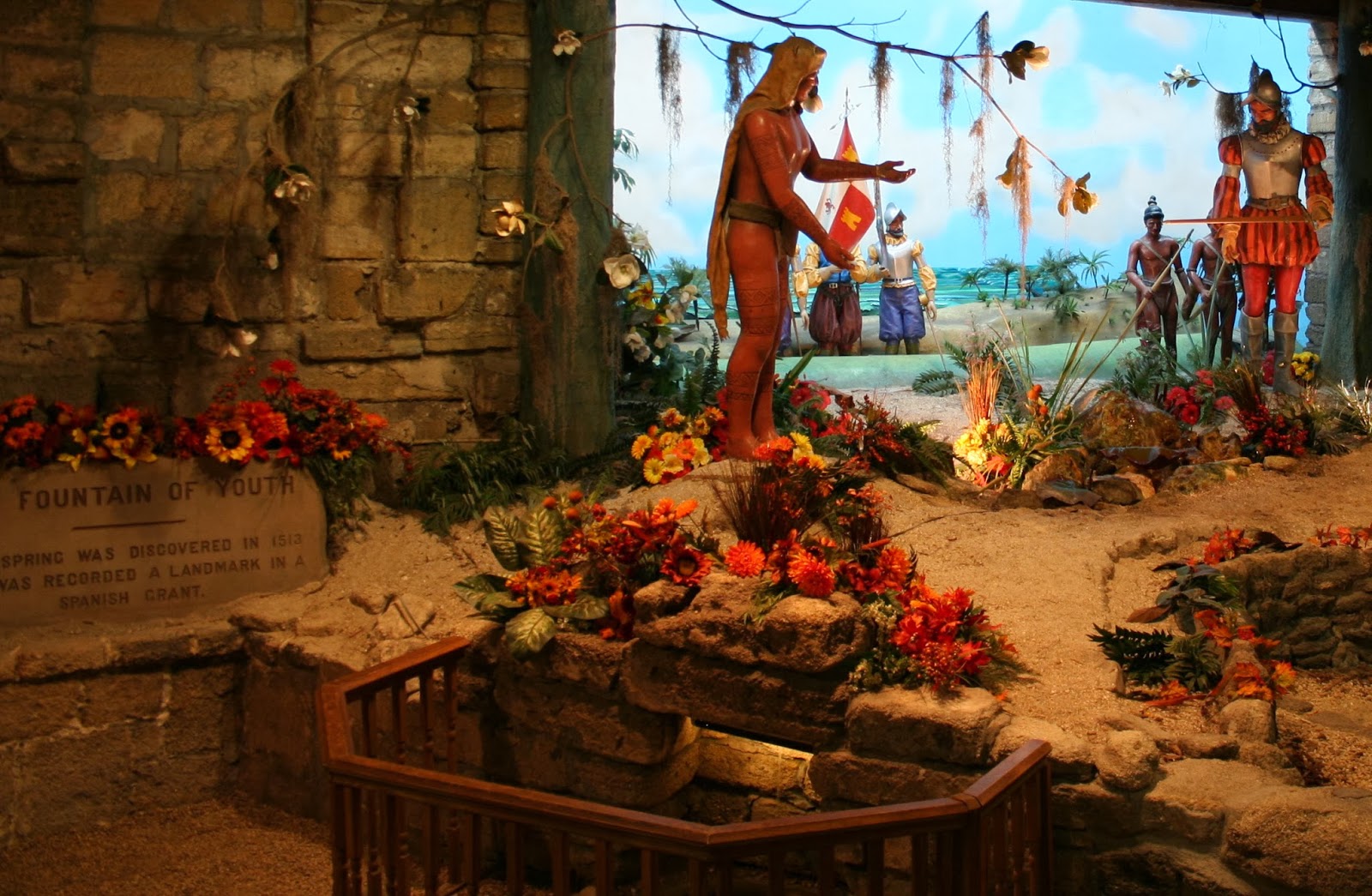 The Fountain, which is a natural spring, is now encased in a building.  In the building you are given a sample of the famous water in a plastic dixie cup.  A docent gives you a spiel explaining the legend of Pounce De Leon in between sips of Spring Water.  He explains that Pounce De Leon actually discovered Florida on this very property. 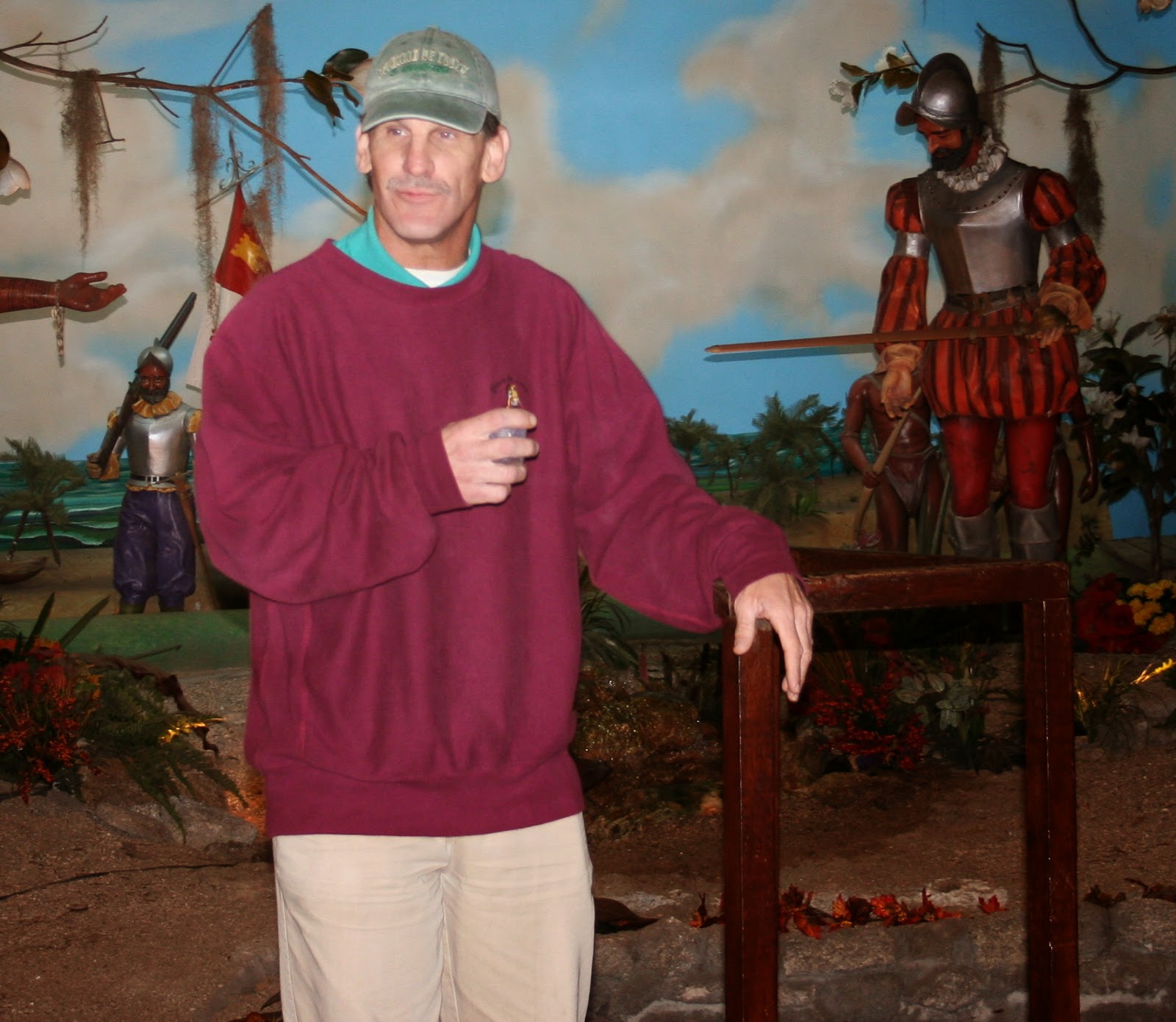 I have to mention that there are several awesome dioramas in the building. 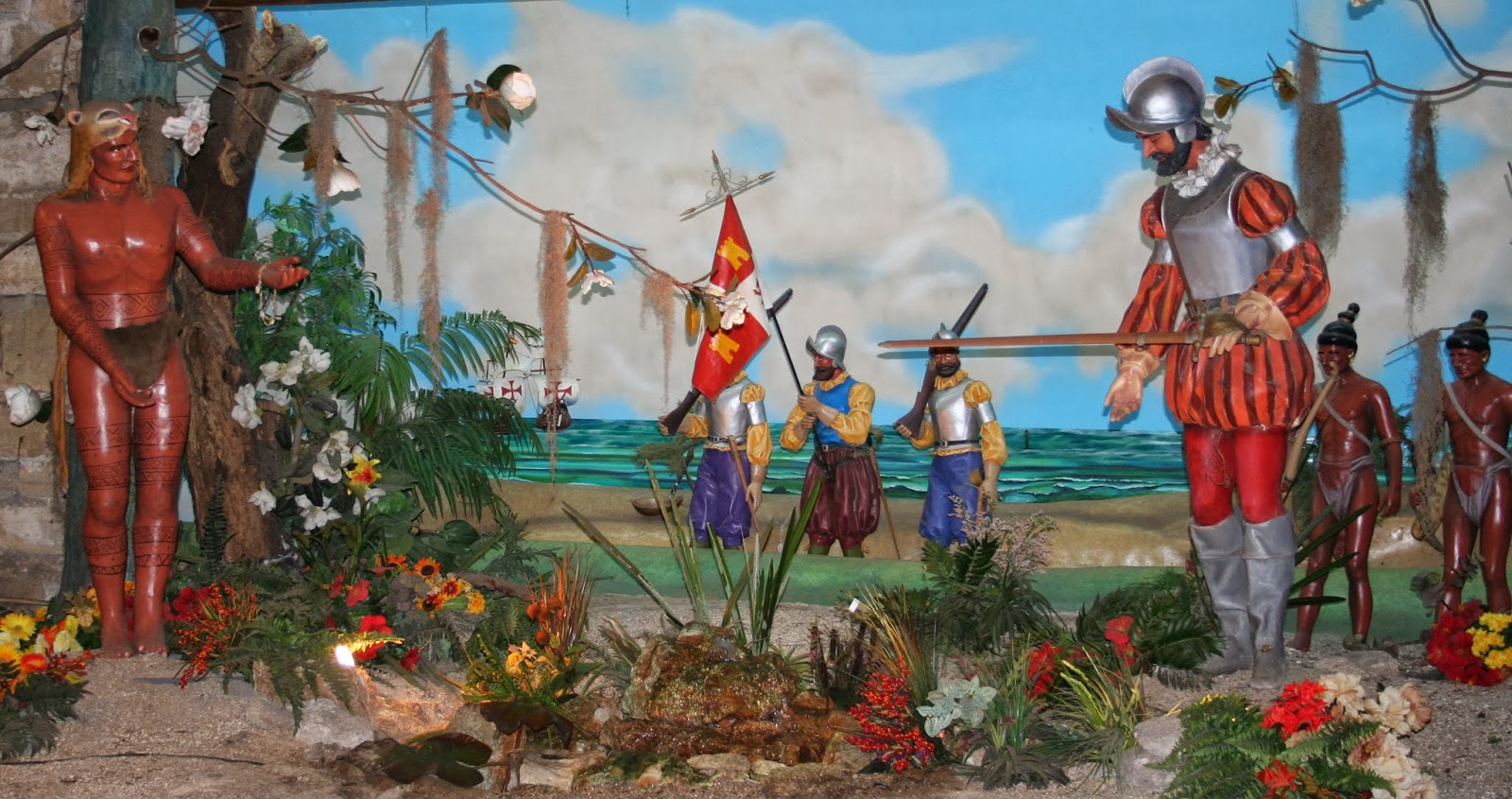 Such as this one which chronicles the meeting of Pounce De Leon and Chief Oriba, who told him about the legend of the Spring.  Which makes this diorama odd is the fact that an important part of the legend involves Cheif Oriba being 7 feet tall and Pounce being under five feet, leading Pounce to think that he had come across a land of giants.  Yet, this diorama lines them up perfectly to show that they are exactly the same height. 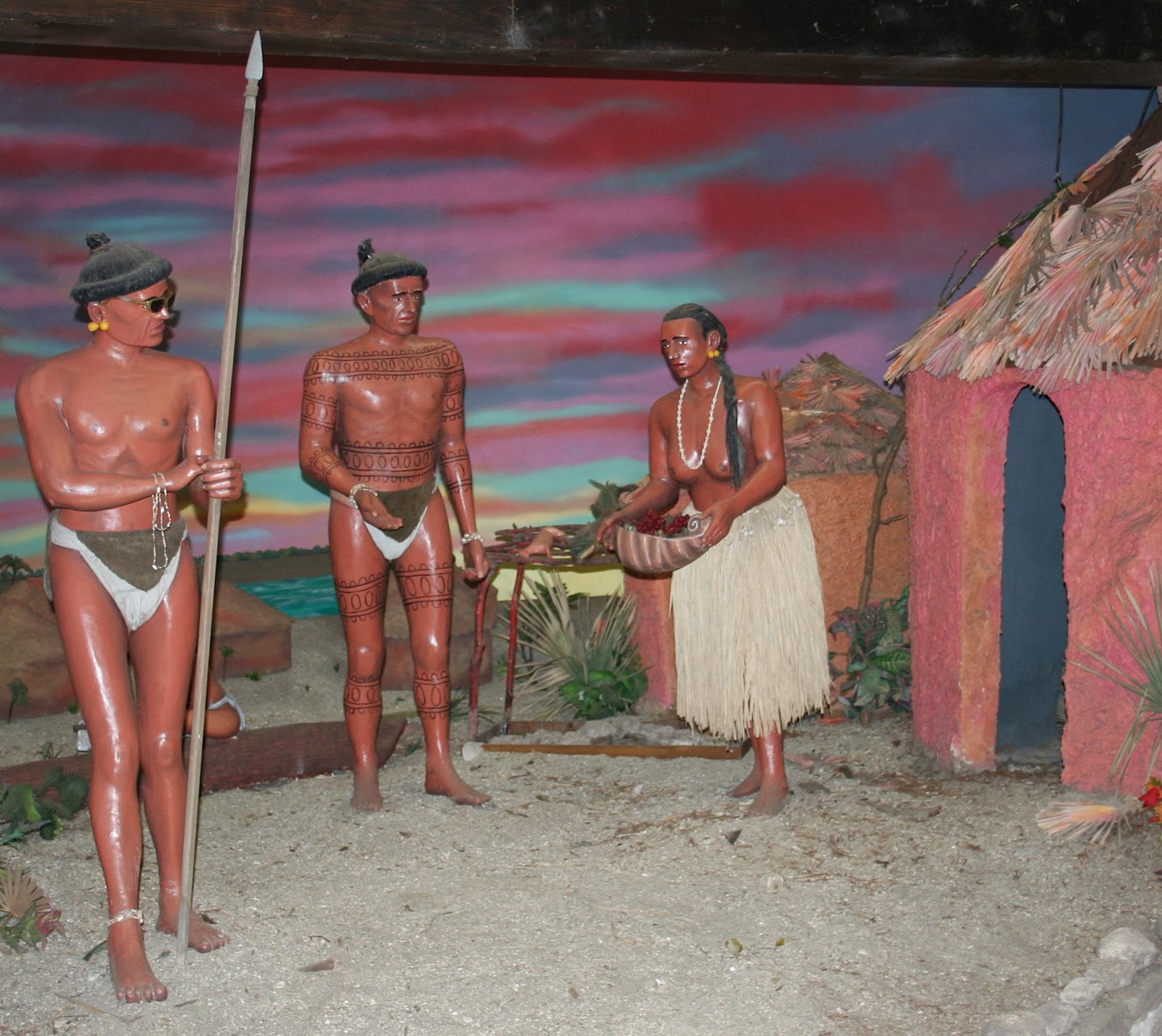 This Diorama shows the daily life of the Timucuan Indians.  What I don't understand is why that one guy is wearing sunglasses.

The tourists all sample the sacred Elixir that is the Fountain of Youth. 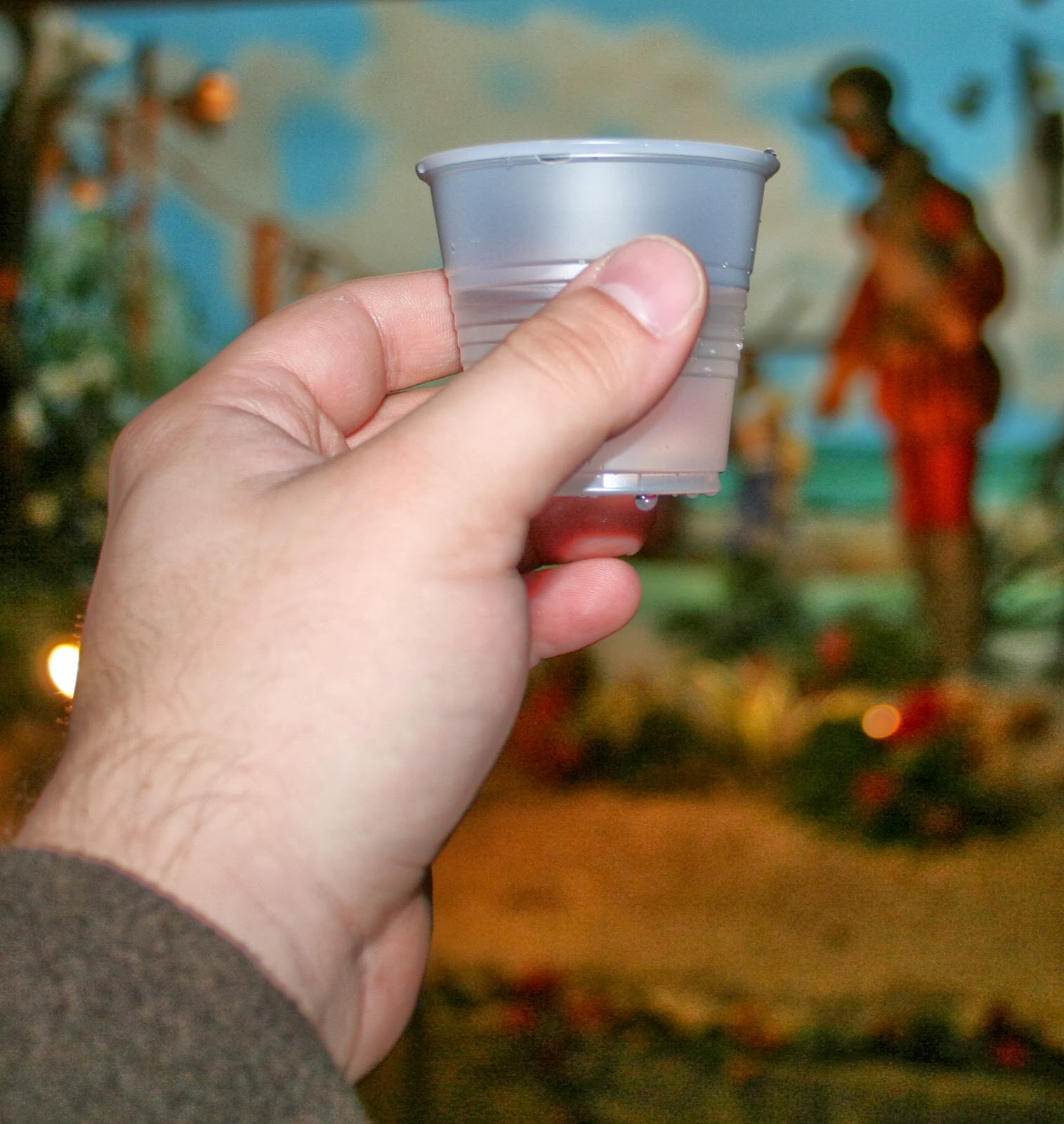 Which is followed by the sounds of gagging, wretching and spitting.  You see, the the twist here is that the sacred water will grant you eternal youth, but it tastes like a combination of match heads and farts.

I feel I should take a minute here to discuss what exactly "The Fountain of Youth" is.  It seems that no one is really sure.  Does it make you turn younger?  Does it make you live forever?  Does it just lock you in the age you currently are?  If you drink enough will you turn into a baby?  I don't know, but I can tell you that it doesn't stop you from getting any fatter.

Of course a puddle of water can only interest tourists for so long.  So this attraction fills things out with some Albino Peacocks...... 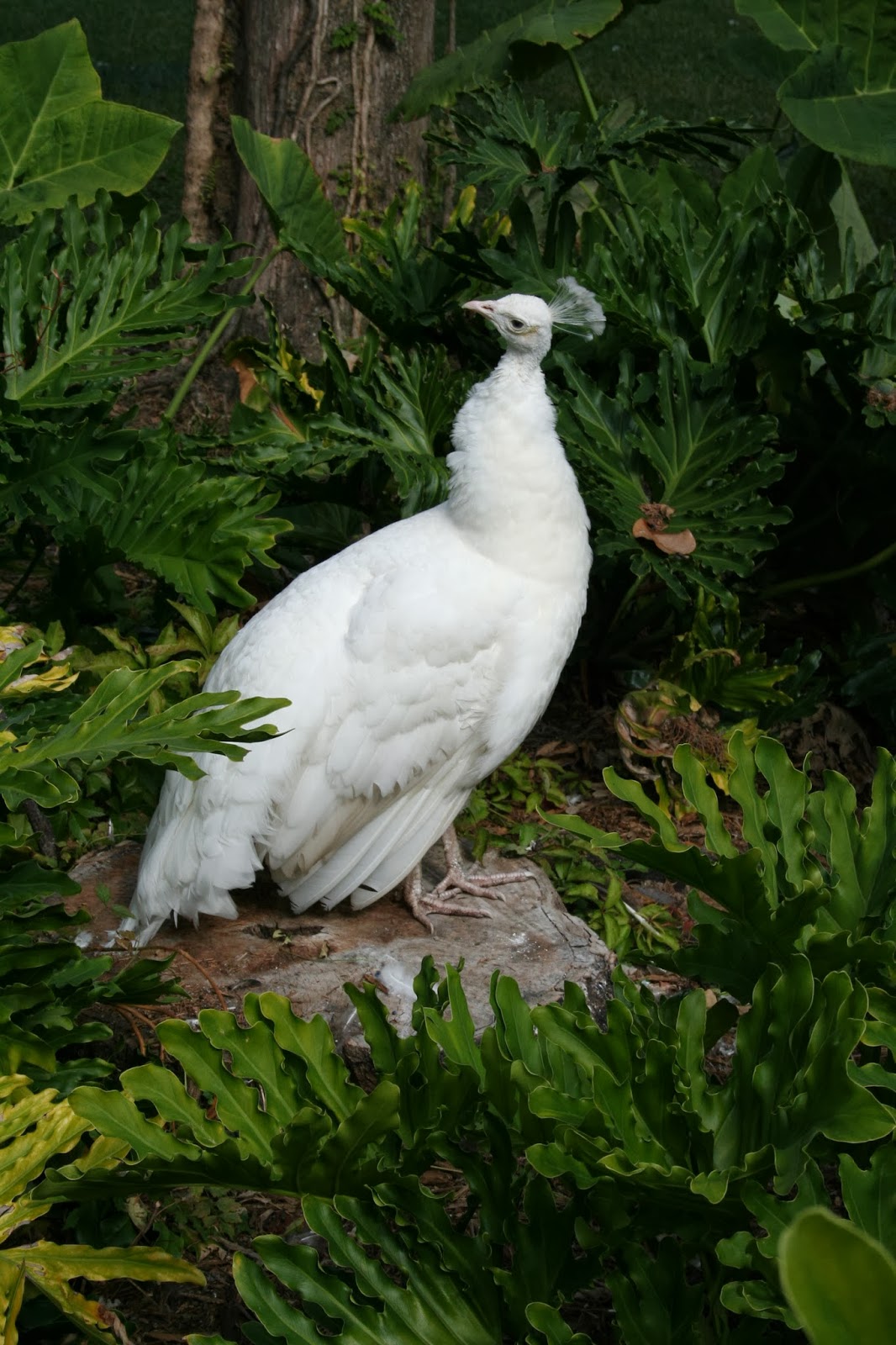 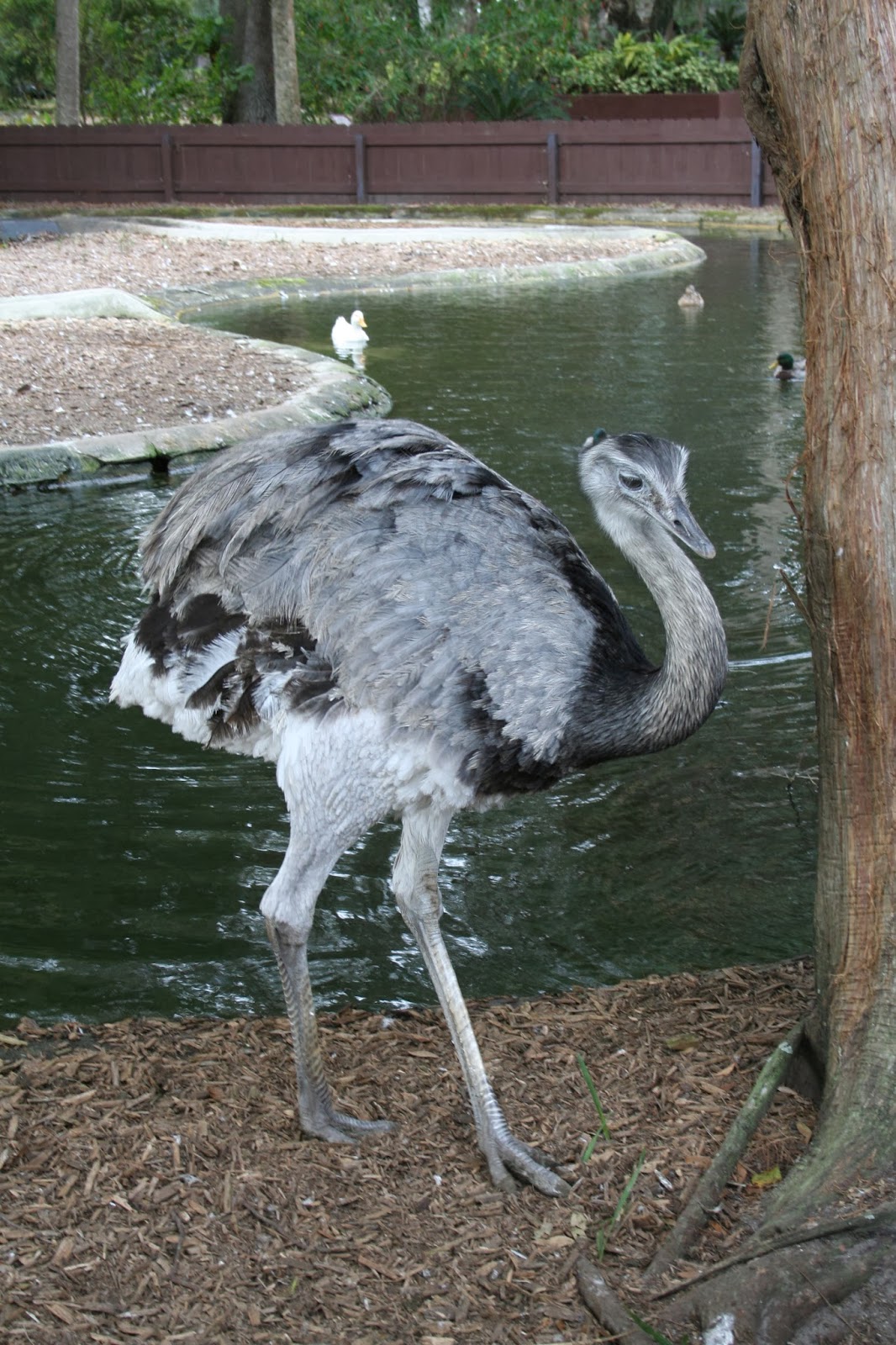 In addition to being the the location where Pounce De Leon discovered America and the location of the Fountain of Youth this is also the home of the oldest Christian Indian graves in America.  The graves were discovered in the 1930s and the good people at the Fountain of Youth dug up the graves completely and covered them with a shelter and put them on display.  However, local native American groups found this disrespectful.  The graves were re-buried, but they were thoughtful enough to cover them with a giant photograph of the formerly uncovered graves.  You should be thankful, because its still completely horrifying. 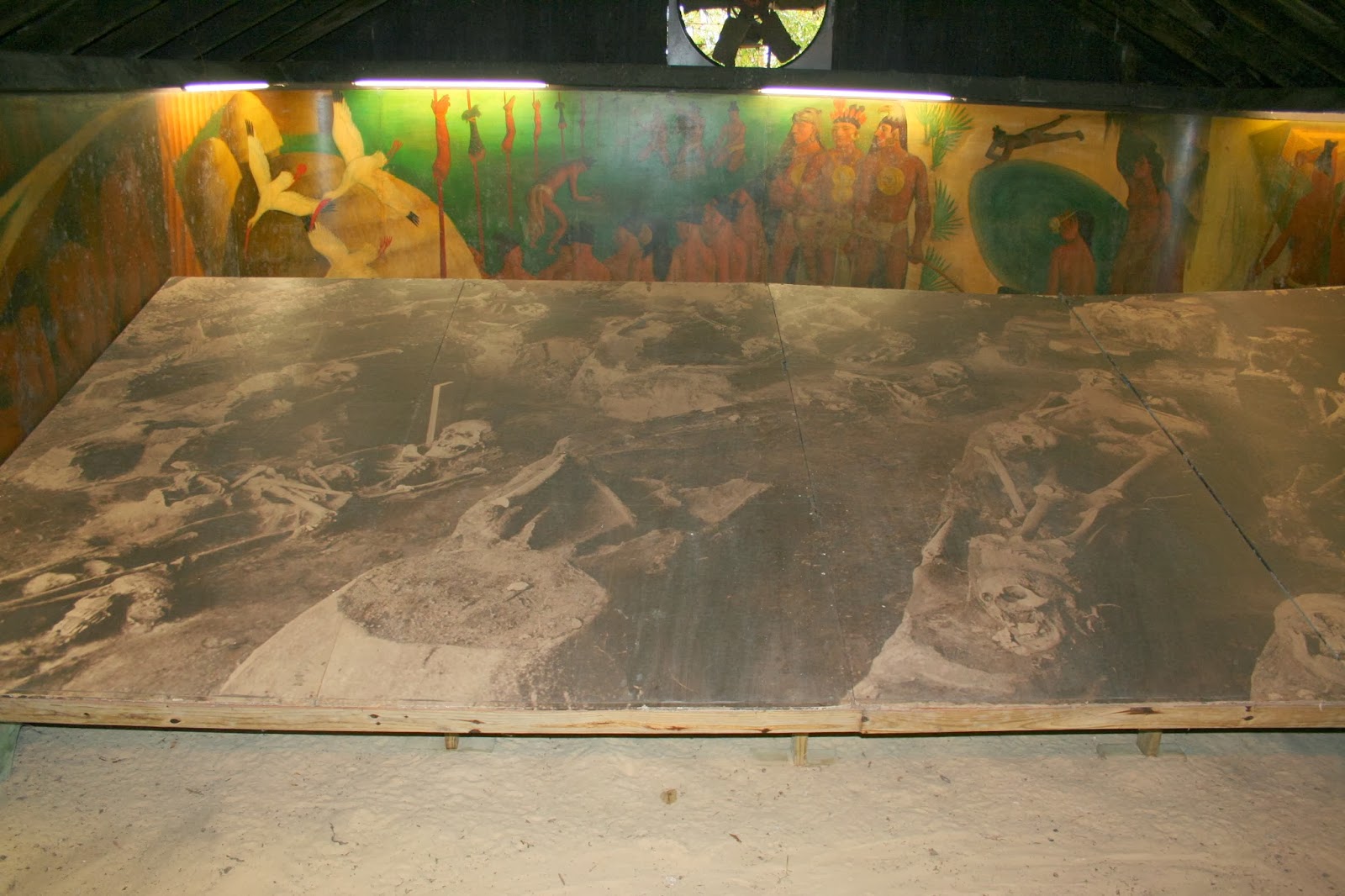 Here is a vintage photo of what the graves used to look like....

Of course a trip to the Fountain of Youth would not be complete without a stop at the gift shop, where you can purchase.....what else.....water.... 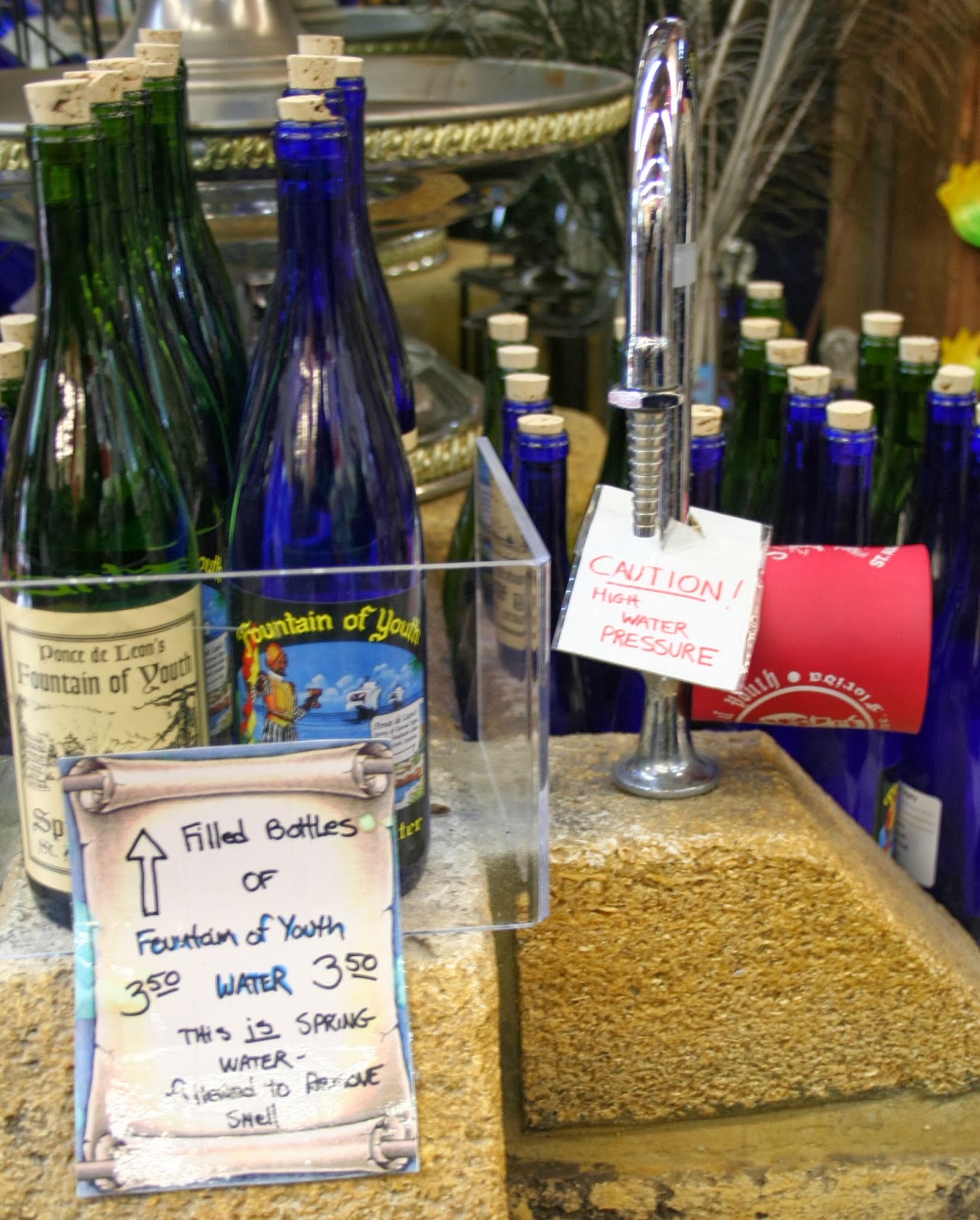 And being the shameless tourist I am, I couldn't pass up this opportunity. 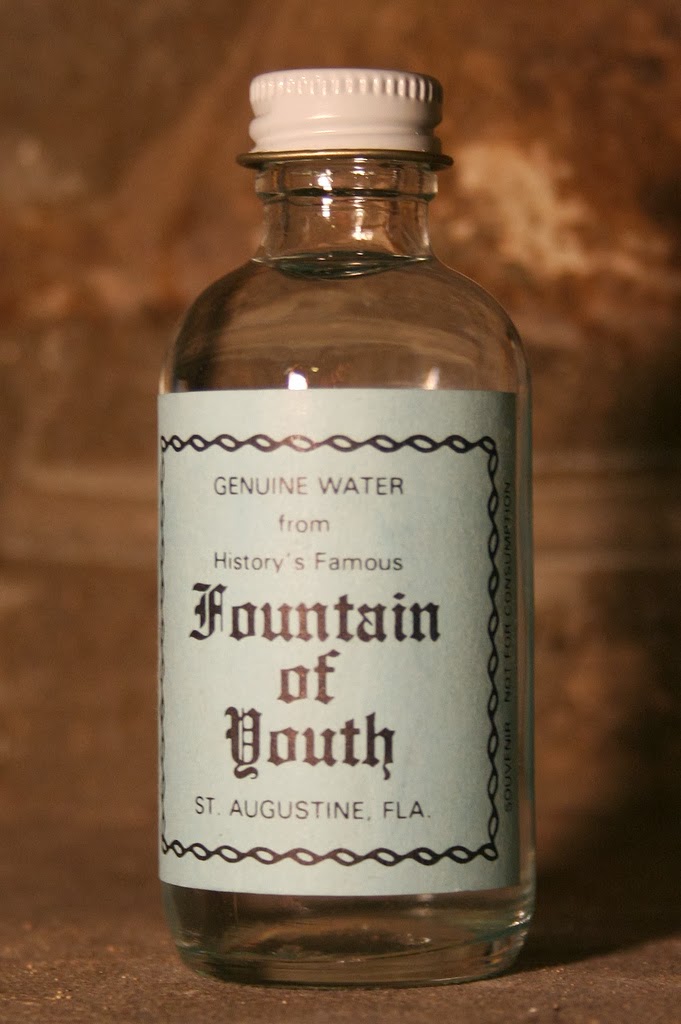 While I am on the subject, I highly recommend my friend Rick Kilby's book Finding the Fountain of Youth, which ties in the story of Pounce De Leon with Florida's famous healing springs.

Please feel free to email me at jacobthecarpetbagger@gmail.com
And don't forget to check out my Flickr Photostream and my Youtube Page
Posted by Jacob at 10:48 PM