You can't argue that one of the biggest pop culture phenomenons to come out in the past year is the TLC show "Here Comes Honey Boo Boo".

They family has appeared on virtually every talk show.  They have been parodied on Saturday Night Live, South Park, and the new installment of "Scary Movie".

The show has been supercharged with controversy.  It chronicles a poor rural southern family that participates in toddler pageants.  People have said that it is a train wreck and exploitive to the family.  Others have criticized the families life style as they eat unhealthy and give their 7 year old daughter mountain dew mixed with red bull to prepare for her pagents.

I will not argue that there are some questionable moments on the show.  As we all know, reality shows are heavily edited and "The Learning Channel" chooses to leave in shots of the family picking their noses and farting.

Is it fair to say this family is responsible for representing the South?

Is there truly anything wrong with the way they live?

Why do we watch this?

I don't have all the answers, but I do find the show fascinating. I feel that the for all the negative things that people say about the family, there is alot to be said is positive about them.  The family not only truly seems to love each other, but seem to do everything together.  This is the sort of family values that everyone claims is missing from America.  While they may embody some of the negative stereotypes people have about poor Southern Whites, they do a lot to break stereotypes.  The family is shown to be completely excepting and loving of the father's gay brother "Uncle Poodle".  June, the mother, even appeared at the GLAAD awards.

The family also uses their facebook page to raise money for anti-bullying campaign.

As anything that reflects on the public's view of the South, I am truly fascinated.

I saw something recently that flabbergasted me.  The family was having a free meet and greet at their house to raise money for the local girl scout troop and they were inviting the public to show up.  So, to get this straight: The stars of one of the most popular shows on television are inviting all their fans to show up at their home!

So yesterday, I showed up to the iconic house by the railroad track, which still had its Christmas lights up. 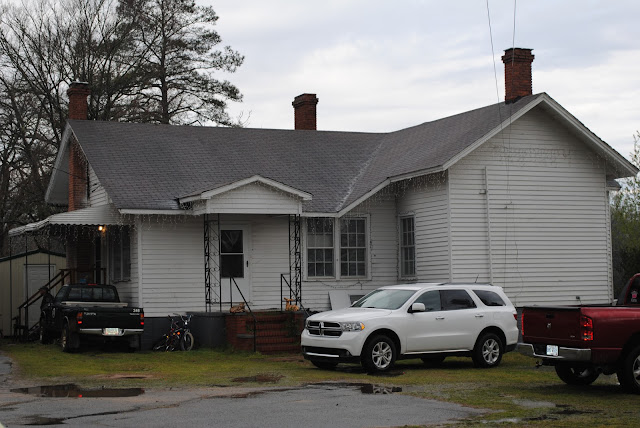 You could hear June shouting as soon as I got out of the car.  It was like stepping right into the show.  After just being around the family for a few minutes, it takes away any doubt about how genuine the family is.  There is no faking in this reality show.

I started out by getting my picture taken with Honey Boo Boo's two older sisters:  Chubbs and Pumpkin. 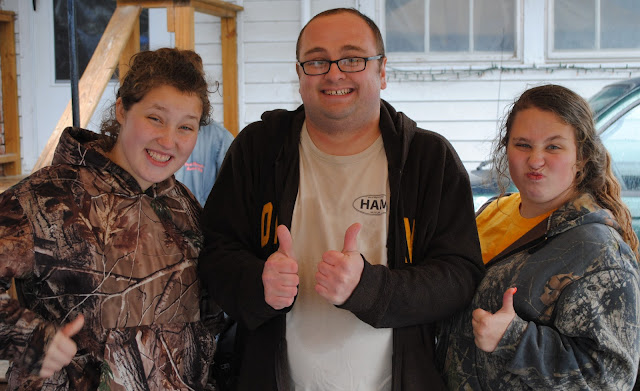 And her father: the long suffering "Sugar Bear" 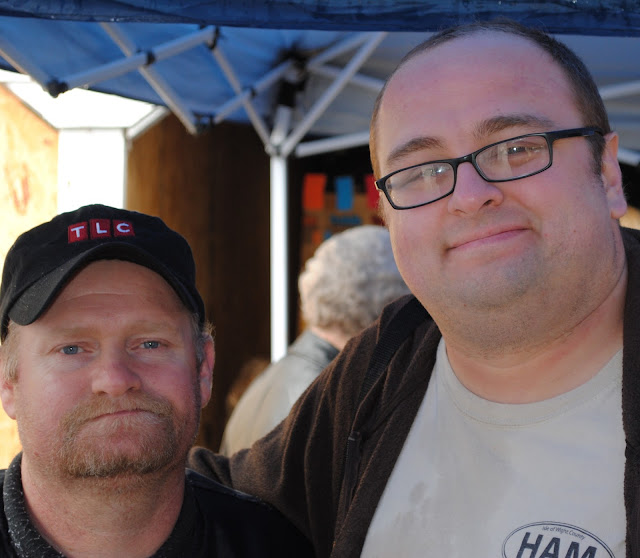 Then the star of the show came out of the crowd shouting that she had to use the bathroom:  Alana "Honey Boo Boo" Thompson. 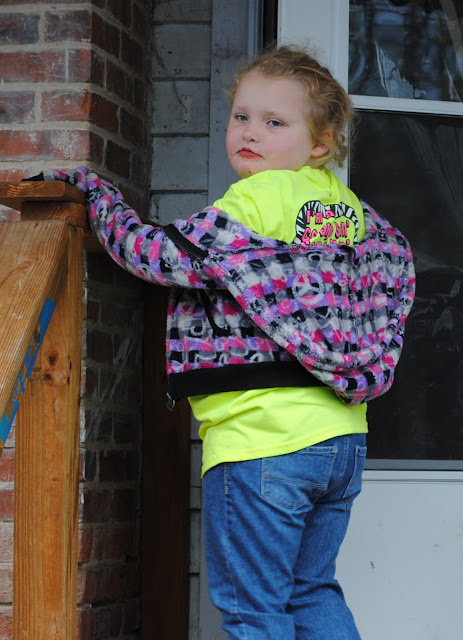 "Hey Alana!"  The crowd shouted.  "Hey stupid person!" She turned and shouted back.

The mother June was very kind and sweet.  Happily posing for pictures without asking anyone for anything in return.  By comparison, at another venue I saw the stars of History Channel's "Moonshiners" charging $25 dollars for pictures. 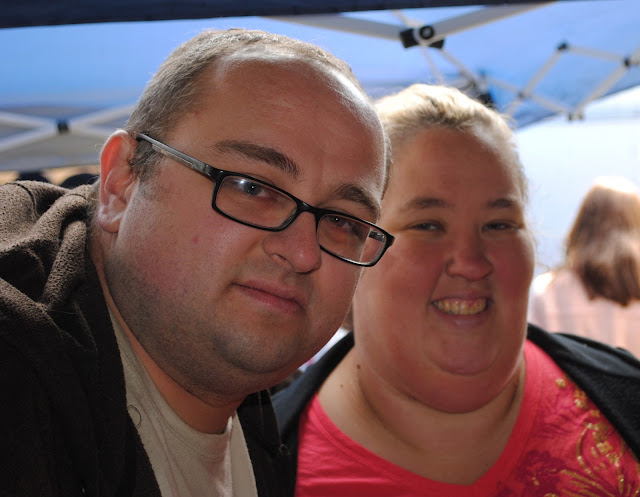 Honey Boo Boo was signing autographs in the families garage. 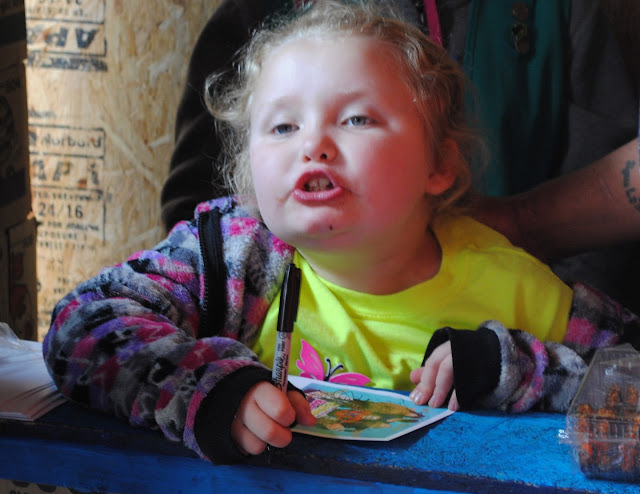 By the time I got in there she was not happy.  She was chowing down on girl scout cookies and drinking Mountain Dew and was at the end of her rope.  She was sick and tired of signing autographs and wanted to go play with her friends and sisters.  At one point she put her face down and refused to talk, despite the fact that there were over a hundred people waiting in line to meet her.  You could tell that she is a little sick of being famous.

She was kind enough to let me take a picture of her with my traveling companion Little Satan. 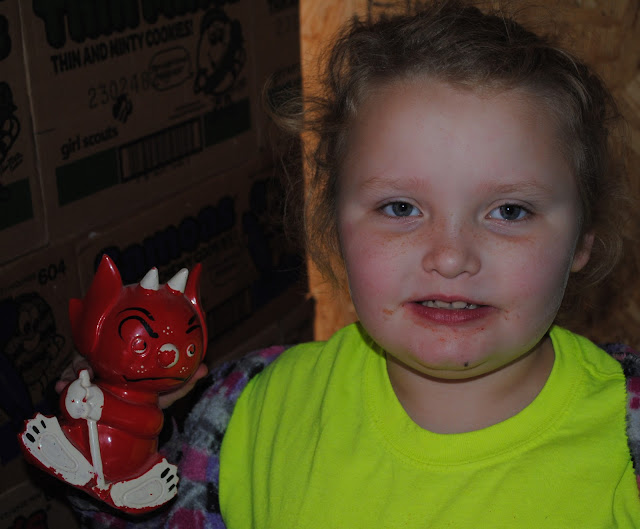 She told me she was not a devil, but then gave him a little hug. 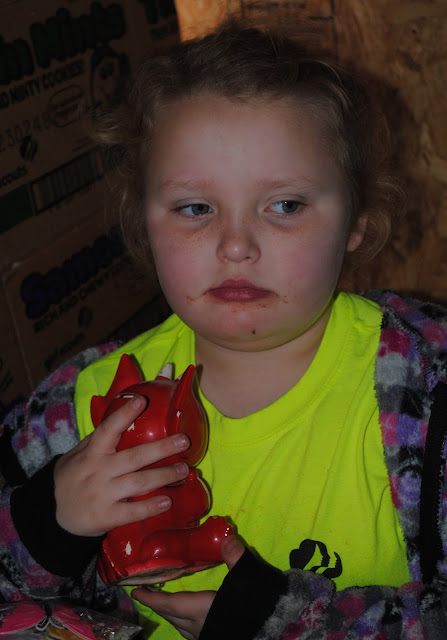 The impression I got was that the family are good genuine people, who are a bit perplexed on why everyone finds them so interesting.  June said people had been waiting outside since 7:00 in the morning, which baffled her.

I want to reiterate that they made absolutely no money off this whole event.  They allowed the local girl scouts to sell cookies and they took donations for the local human society.  They allowed their fans into their personal space and asked for nothing in return.  They may not have good manners, and they may be a little loud, but they are genuine good people. 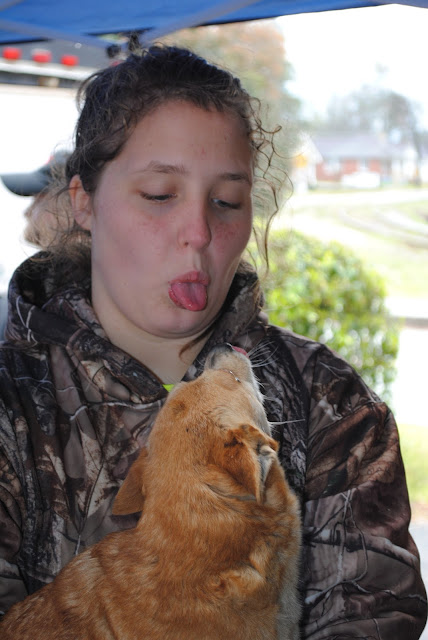 Please feel free to e-mail me at jacobthecarpetbagger@gmail.com
and check out my Flickr Photostream
Posted by Jacob at 1:57 PM