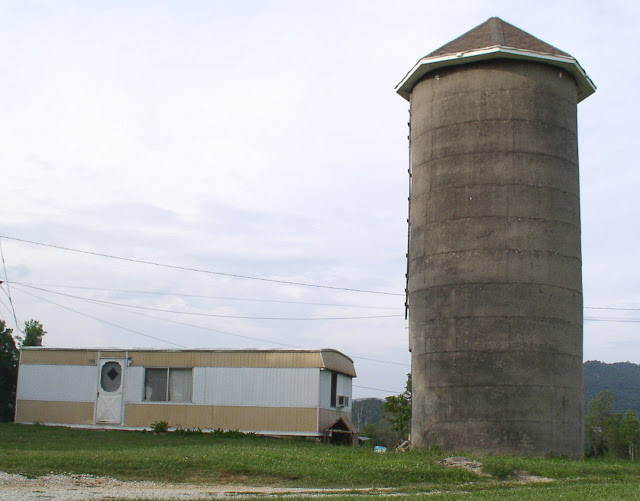 When I drove by this trailer awhile back I got a sick feeling in my stomach.  Something was missing.  The door used to be covered with hand scrawled notes.  Most prominent was a one that stated "Jehovah's Witnesses Will Be Shot on Site".

I knew the man that lived here and it was clear he did not live here anymore.

When I first moved to the South in 2000 I got a job as a waiter at a local family style southern cooking restaurant.  Donny was a dishwasher in his mid 50s that had been working there for over 20 years.  I have to admit I didn't know what to make of Donny at first.  He dressed from head to toe in camouflage, wore a toy sheriff's badge everyday and sported a mullet.  He was constantly removing his dentures and reapplying denture cream with his food covered hands.  When we got really busy he would swear under his breath and stare off into space with a murderous gaze.

One day out of the corner of my eye I saw someone throw a sharp knife into his silverware tub while Donny wasn't looking.  I reached in and scooped out the knife and showed it Donny and told him to be careful.  After this Donny was extremely warm to me and always took time to stop and talk to me.

Donny fancied himself as a comedian and would love to let me hear his new material.  Most of his jokes were fairly off color.

"Hey Jacob, Did you hear about the knew study?  The proved that eating ***** makes your teeth fall out!"  Then he give a thumbs up and a big smile without his dentures.

Another favorite trick was was for him to pretend to slit his wrist with a broken dish while pouring beat juice on his wrist, creating a fairly convincing and gruesome image.  I saw him nearly give a little waitress a heart attack.

His favorite saying was "If Santa Clause and the Easter Bunny aren't real, then God and Jesus Don't stand a chance."

Donny did not drive and could always be seen walking up and down town on his day off.  His off-work uniform was always a cut-off shirt that exposed his mid rift and  extremely short cut jean shorts.  He asked me one day what the law was about carrying knives in public.  He stated that he had been sexually propositioned bu a man.  Donny stated that he could dress anyway he wanted and it didn't mean he was gay.

Donny's soft spot was cats.  He had a scorpion tattooed on his arm.  He explained that this was in honor of his dead cat Damien, explaining that he could not think of anything that represented Damien better then a scorpion.

Donny used to live on the hotel property in a halfway abandoned section of rooms known as "the cat house".  When the cat house was condemned and transformed into a place for migrant workers to shuck corn Donny moved into a single wide trailer down the road.

I was promoted to night security guard after a few years.  It was an unwritten rule that the night security guard drove Donny home.  Despite the fact that this was actually very much against the rules, it was something you just did.  Donny had a bad back and after a night of washing dishes he was in no shape to be walking 2 miles to his trailer.

As I gave Donny his nightly ride he would tell me how anxious he was to get home and listen to his favorite radio show "House of Hair" with Dee Snider from Twisted Sister.

There was a time when the other security guard was driving him home and accidently ran over a kitten.  Every night when I drove him back to his trailer we would pass this spot and he would let out a "Meow", stating it was in honor of the dead kitten.  He would stop mid sentence to say "Meow".

In addition to being a comedian, Donny also fancied himself as a musician.  Donny's instrument was the bongo drums.  Donny was very excited when he got a "gig" as the entertainment at the employee Christmas party.  Donny got up in front of the audience like a true showman.  He dedicated his performance to the victims of 911 and to R&B singer Aliyah (Who had died recently).  He flipped on a pre-recorded back beat on an old ghetto blaster style radio and wailed on his bongos.  Donny went into a trance and beat his bongos for what seemed like hours without making a sound.  He later told me he was very proud of his performance.

Donny would spend the next year anticipating the employee Christmas party and preparing his bongo performance.  He showed up the following year to find that he was the only person there.  The entire staff had ditched the Christmas part in protest of the fact that they refused to allow alcohol.  They all went to a more alcohol friendly party.  No one told Donny about this.  I did not attend because I was out of state visiting family.  Donny walked all the way back to his trailer by himself sobbing.

I would leave the restaurant shortly after this on bad terms.  The owner was a psychopath and chased me across the parking lot when I quit saying he was going to kick my ass.

I never had a chance to say good bye to Donny.  I always hoped that whoever replaced me was still giving him rides home.

When I ventured back through the old property I found Donny's trailer with all his sign down.  I have not seen him since.  I hope nothing bad happened and I hope he did not have to suffer the indignity of being fired by the old bastard that ran the place, who loved firing people for no reason just to keep other workers on their toes.

I hope Donny is out there still being Donny.  Donny had been dealt an undesirable hand in life and it never slowed him down.  Life kept letting him down, but he never seemed to loose his smile.