Before I became a dirty Carpetbagger I grew up in the Midwest.  My mother lived in Valparaiso, IN and my father lived in Milwaukee, WI and I split time between the two.  This Christmas I loaded my family in the car to visit family and maybe check out a few roadside attractions on the way there.

Our first pit stop was in Louisville, KY where we stopped to see the world's largest baseball bat. 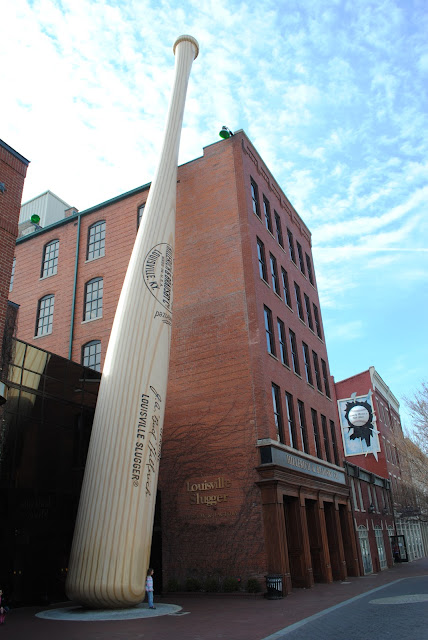 That's my daughter there at the bottom.  When she realized that the bat was made of fiberglass and not wood she declared that it was "stupid" and a waste of time.

True, its not wood, but it is very very big. 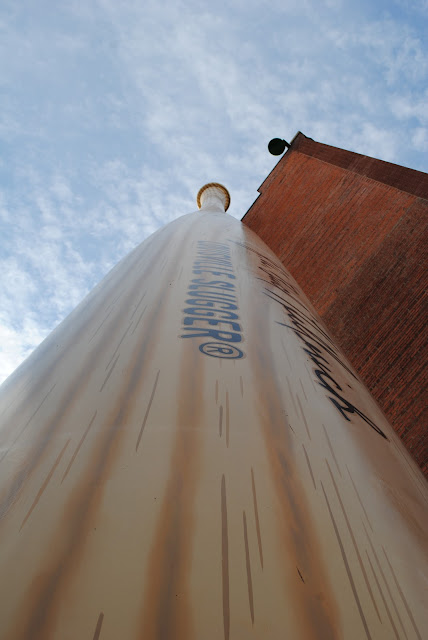 Next stop is the town I grew up in: Valparaiso, IN.  Valparaiso is known for one man and one man only.

That man is Orville Redenbacher, the guy whose picture is on your popcorn right now.

Orville was from Valparaiso and he would come visit once a year at our local "Popcorn Festival'.  Here is a picture I took of him when I was 12. In 1995 when I went to start my paper route I saw a shocking headline:  "Town Hero Dies".  Orville had drowned in his hot tub in California.  A town mourned.

But now Valparaiso has done its proper civic duty and erected a statue to its town hero. 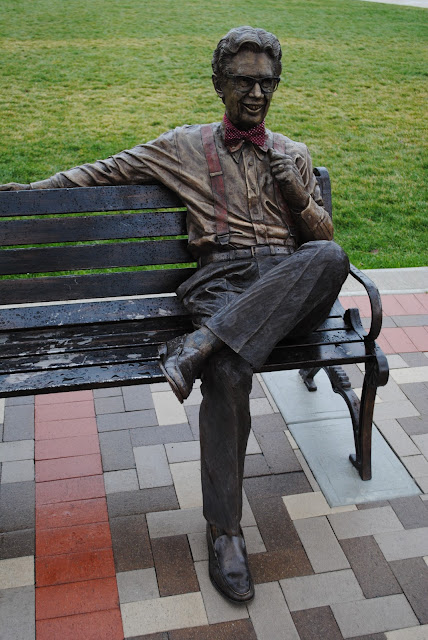 The detail is almost unsettling! 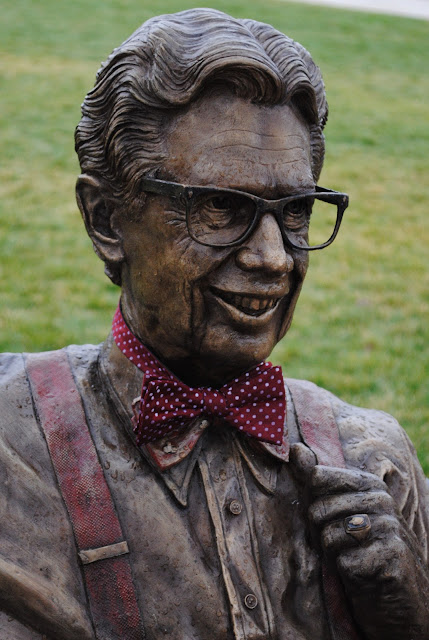 As we headed north to Milwaukee we stopped to pick up the two things that fuel our Wisconsin trip: Cheese and defective Jelly Beans.

Next stop is the Jelly Belly Warehouse Tour in Pleasant Prairie, WI. Now keep in mind this is not a "factory tour", you will not see Jelly Beans being made.  It is a "warehouse tour" meaning you will be riding a tram around a bunch of cardboard boxes.  They do however have a couple flat screen TVs showing you how Jelly Beans are made.

They also have a shrine to Ronald Reagan. 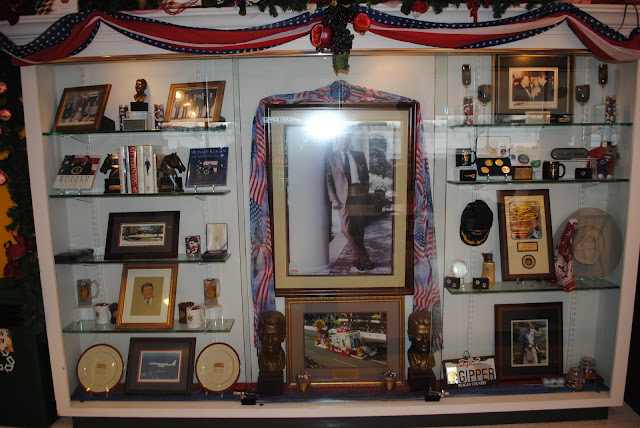 You see, in the Jelly Bean world Ronald Reagan is considered royalty on account of the fact that he liked eating Jelly Beans.

They also have Jelly Bean art portraying Reagan as superman. While there we loaded up on "Belly Flops" which are defective and misshapen Jelly Bellies sold at half price.

You can also buy strange and rare flavors, but we passed on that. 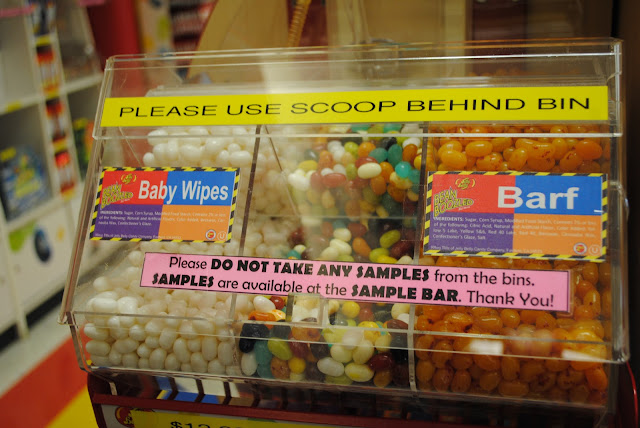 Next we stop to stock up on cheese curds at the Mars Cheese Castle just a few miles down the road from the Jelly Bean Factory. 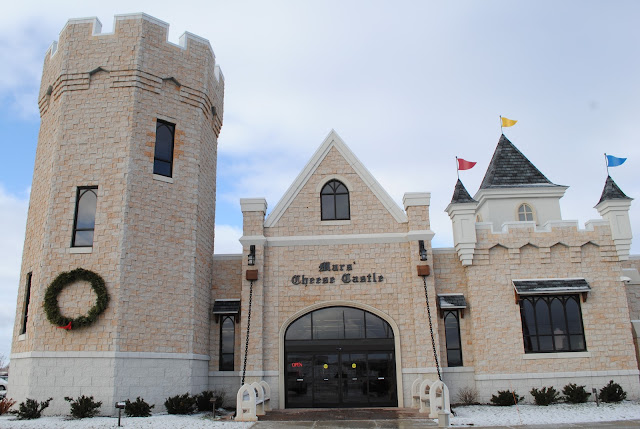 They have recently moved to this shiny new building.  I miss their old folksy location, but they did keep their classic old sign. 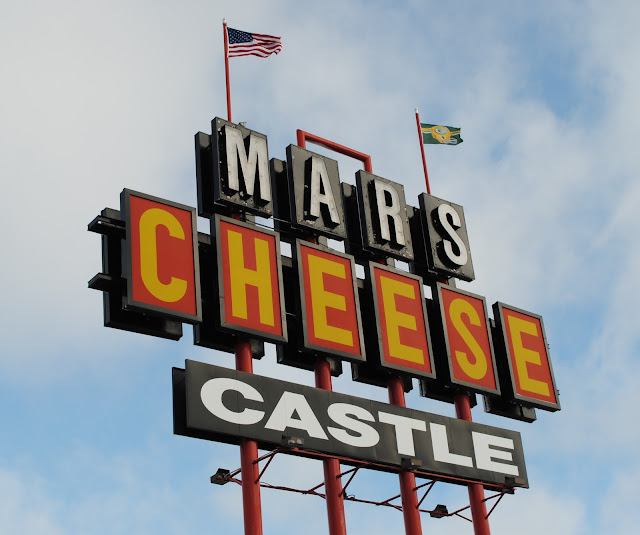 Note that the Green Bay Packers flag is flown at full mast, just as the America Flag.  This is Wisconsin! 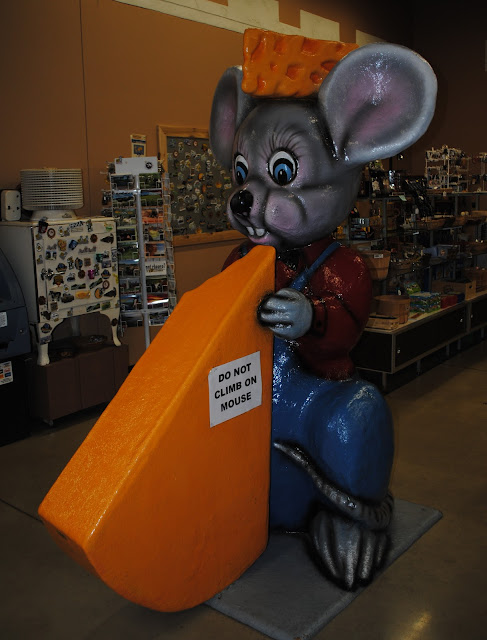 Now much like Valparaiso, Milwaukee has a bronze statue of their icon.  However, Milwaukee's is a fictional character:  Arthur Fonzerelli:  The Fonz. 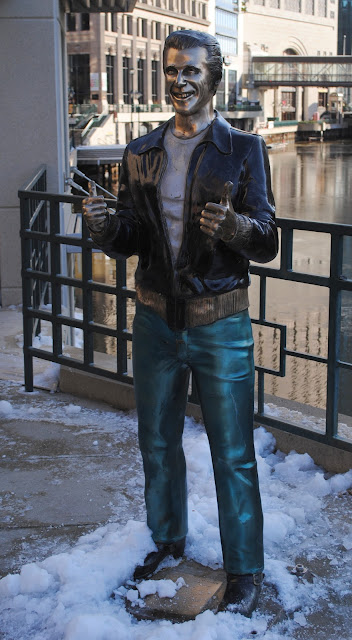 But the Fonz is not the only iconic statue in Milwaukee.  I set out on foot and hunted down the statue of King Gambrinus: The man who invented beer. 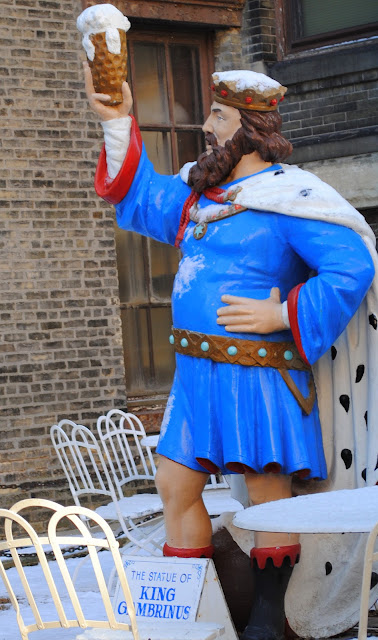 He is located near the old Pabst Brewery, which I'm guessing is some sort of hipster mecca. 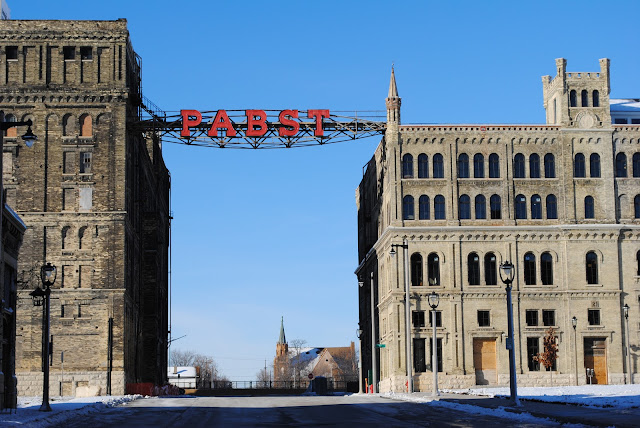 On my daughters last birthday we took her to the NC Zoo.  Going there she had one mission: To see Wilhelm the Polar Bear. Wilhelm is the beloved Polar Bear that normally resides at the North Carolina Zoo.  He was rescued from a Mexican Circus were he lived in a tank full of hot water under a roller coaster.  His head is misshapen due to malnutrition and neglect.  My daughter was heartbroken when we found that Wilhelm had moved and was now staying at the Milwaukee zoo.

So, we could not visit Milwaukee without seeing Wilhelm. We braved the freezing cold and snow to visit Wilhelm at last. 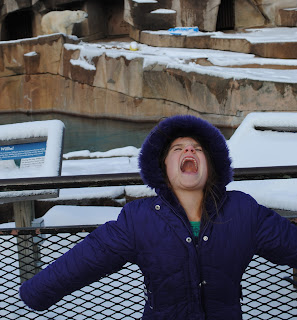 My daughter got to see her polar bear and I got to see a bunch of cool vintage Mold-a-rama machines. 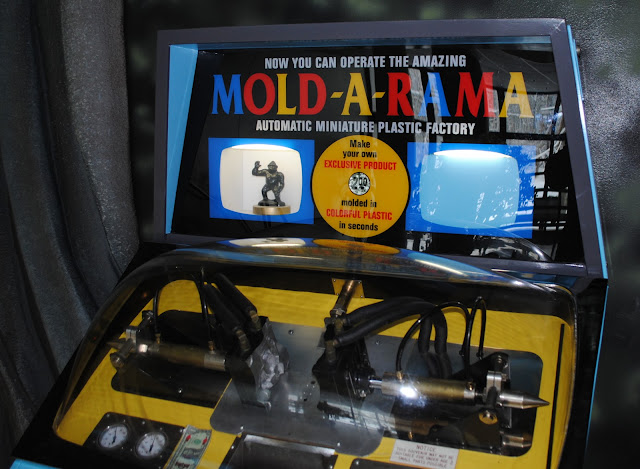 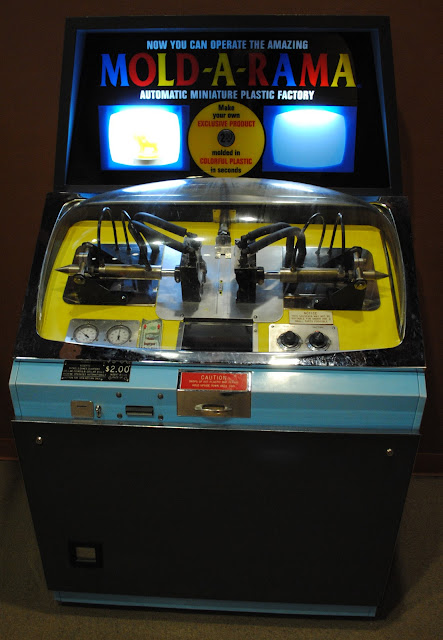 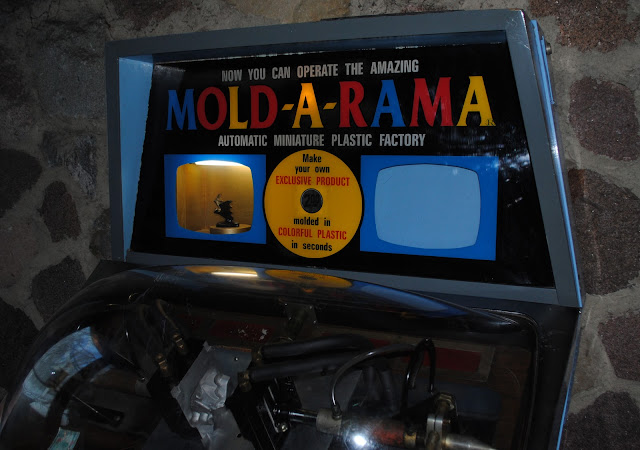 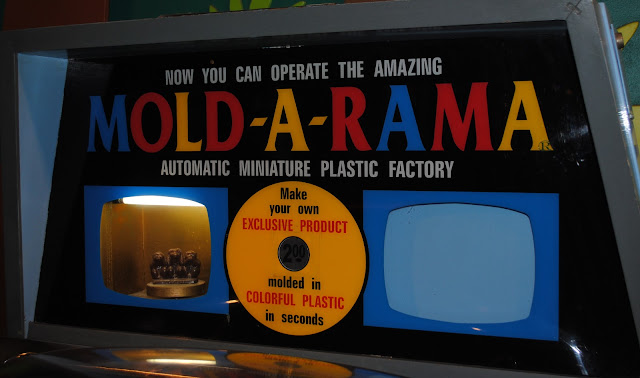 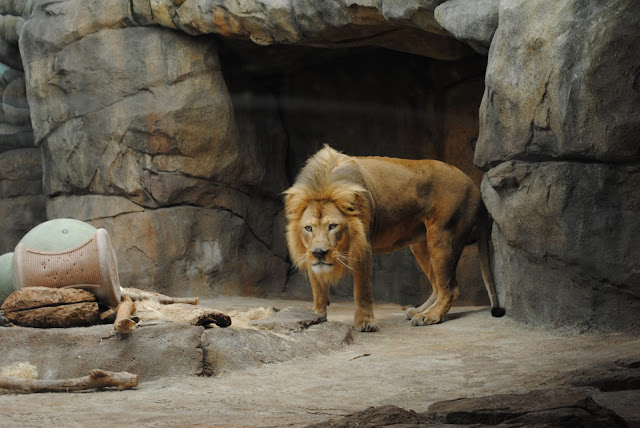 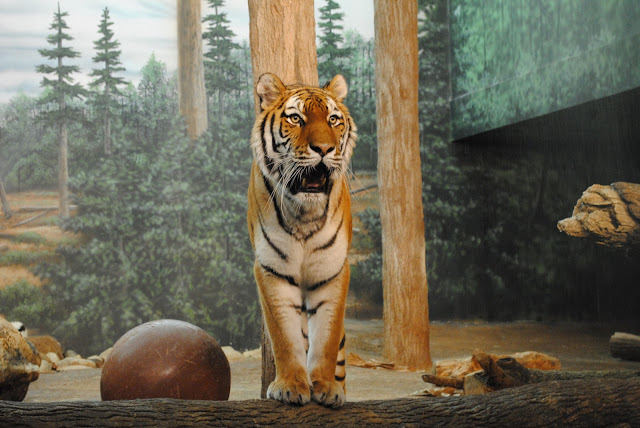 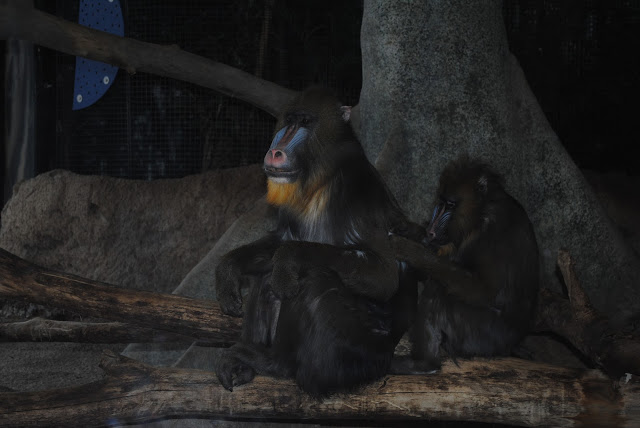 We finish our trip with a visit to the Milwaukee Public Museum.  Growing up this building was possibly my most favorite place in the universe.  I would beg my father to take me constantly me, my brother and my cousin would have every inch committed to memory.

I got to visit all my old friends.... 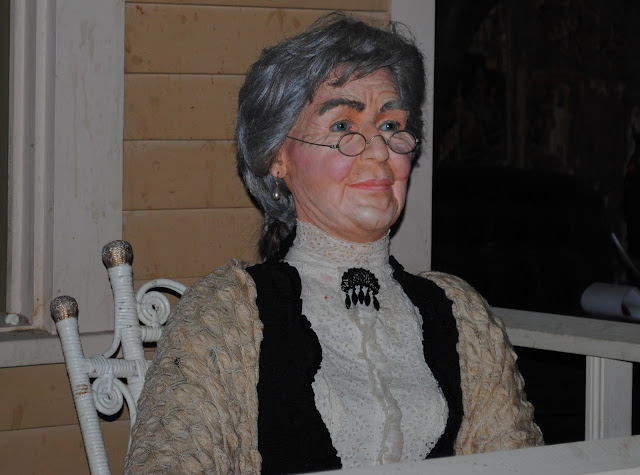 The fake old lady who scared the hell out of me as a kid.... 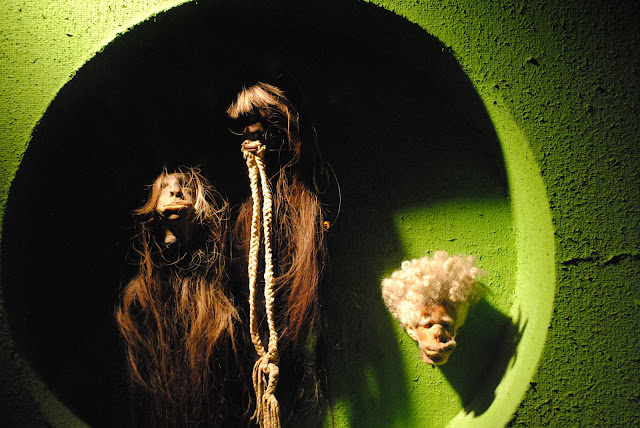 The creepy shrunken heads that scared the hell out of me as a kid..... 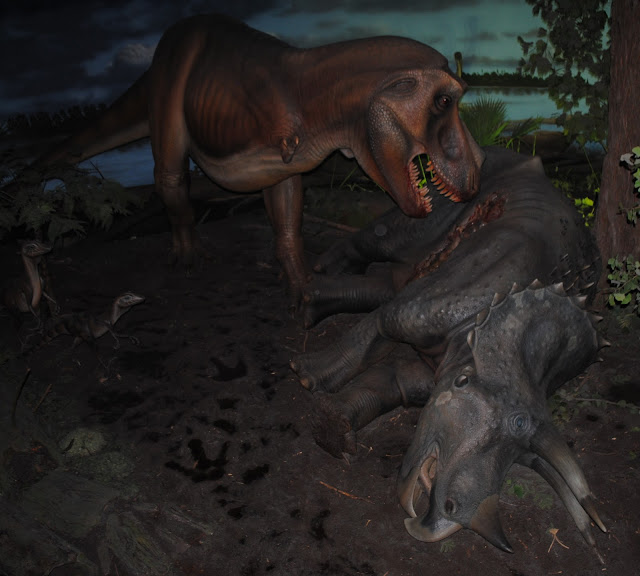 And who could forget the ultra gory dinosaur scene that scared the shit out of me as a kid...........

I do believe in this building my love for taxidermy and creepy mannequins was born.... 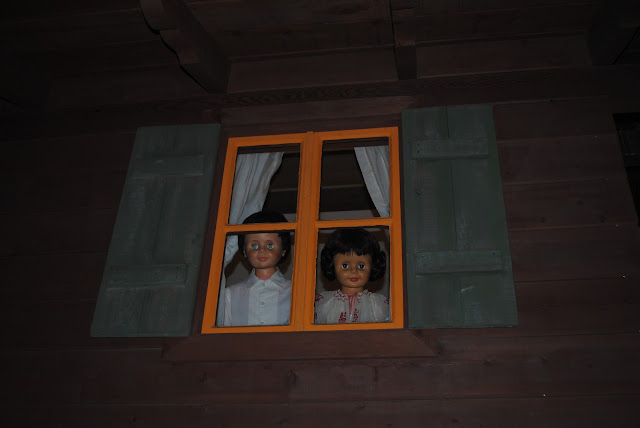 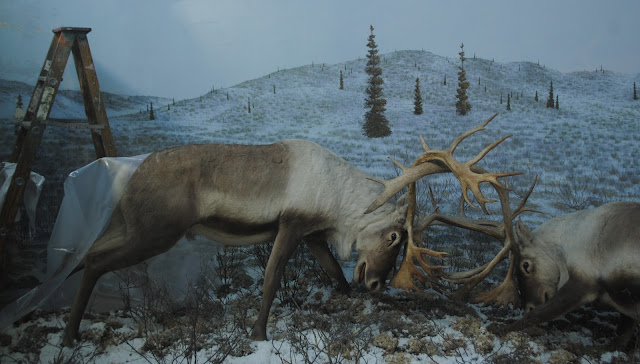 It was great to visit my family and check out the roadside stops, but the South has something the Midwest never will: a decent climate.

Please feel free to e-mail me at jacobthecarpetbagger@gmail.com
and check out my Flickr Photostream
Posted by Jacob at 4:06 PM