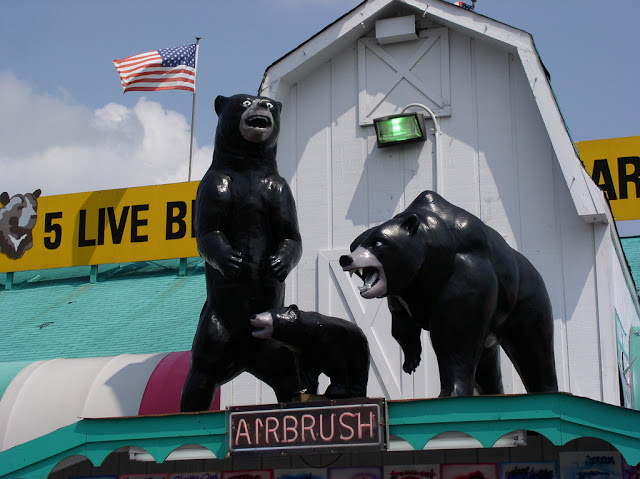 Here in the Smokey Mountain the Bear is King.  They are used to advertize and sell just about everything.  I actually think that there are more fiberglass then flesh bears in these hills.  You may set out to see a bear in the woods, but they are hard to find, and you might get eaten.  Usually you are going to have to set for seeing a taxidermied bear. However, if you insist on seeing a real flesh and blood bear you may have to engage in a timeless and controversial practice:  The Bear Pit.

There are four active Bear Pits in different tourist towns.  Cherokee, NC has two of them.  Across the Mountain in Tennessee there is one in Pigeon Forge, TN and then a few hours South there is one in the bizarre Bavarian mecca Helen, GA.

Here is the basic idea behind the bear pit.  Take a concrete pit and fill it full of bears.


Well, that would just being boring and sad, so you have to spice it up a bit.  As you enter you are give a plate of apple slices, stale bread and wilted lettuce.  You then chuck these pieces into the pits and the bears catch them in their mouths.  The following videos illustrate this process.


Some of the bears learn tricks to draw in more food, like this fellow who climbs up in a tree and claps. 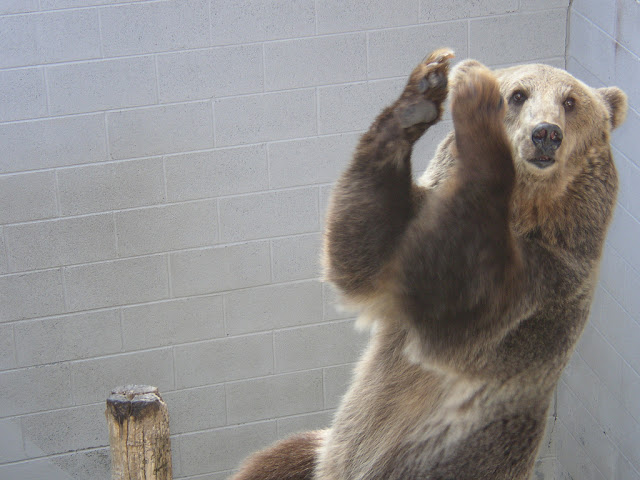 Maybe a little degrading for something that could rip your head off with a swipe of his paw. 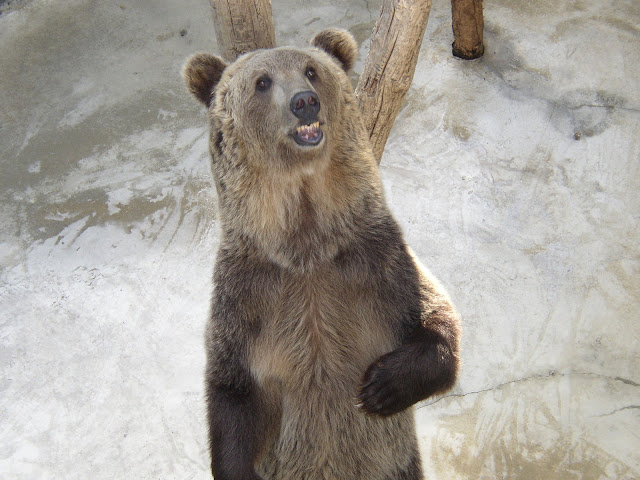 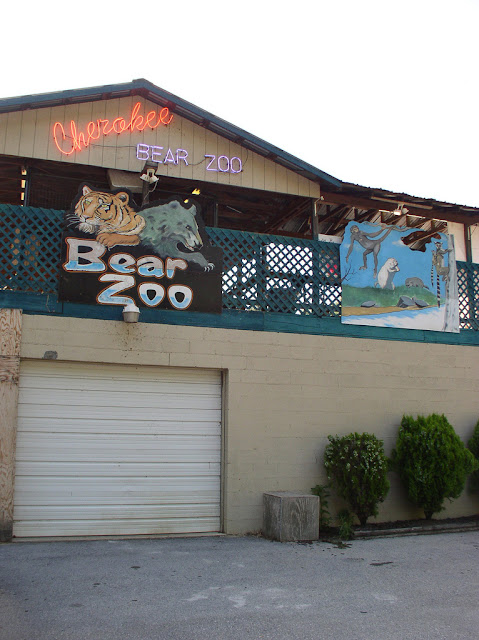 Cherokee Bear Zoo keeps other animals as well, such as this tiger. 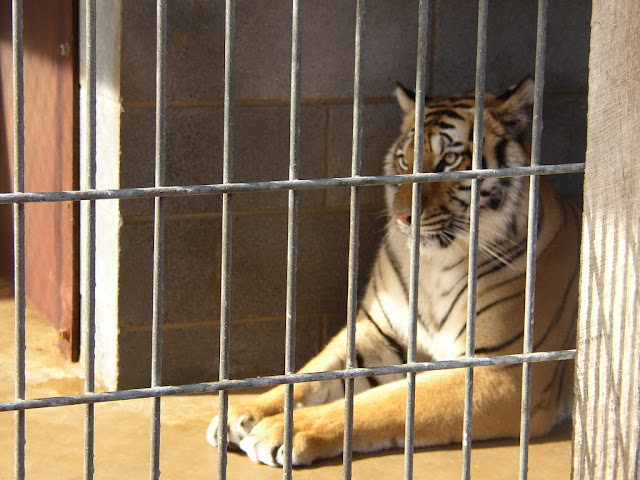 and this monkey that makes faces and shakes his genitals at you........ 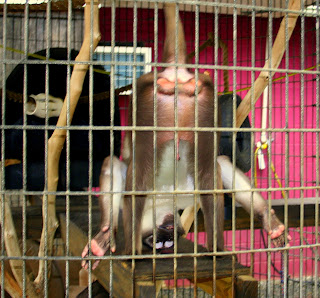 Now these Bears pits have become very controversial and has lead to Peta starting a campaign against them.

They put up this billboard with a sad little bear.....

When that failed to win people over they replaced it with the following sign.... 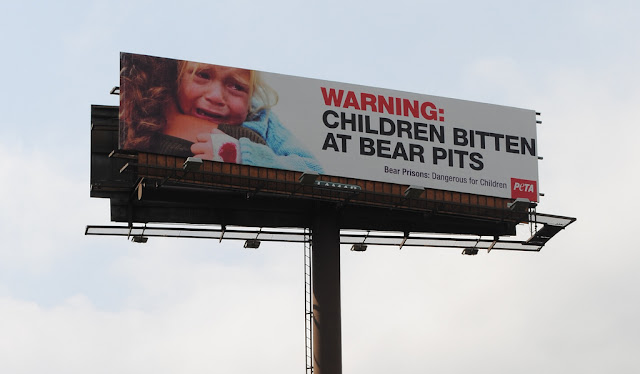 That is right....if you visit the pits, bears will eat your children!

Peta brought out its big guns and sent in Bob Barker to make an appeal to the chief of the Eastern Band of Cherokee the have the bear pits shut down.

The Chief responded by banning Barker from the reservation.

I like to see myself as having a neutral point of view on this, but I have a confession to make.  I cannot say "no" to an opportunity to get close to wild dangerous animals.  At the Cherokee bear zoo I paid to have them let me hold a tiger. 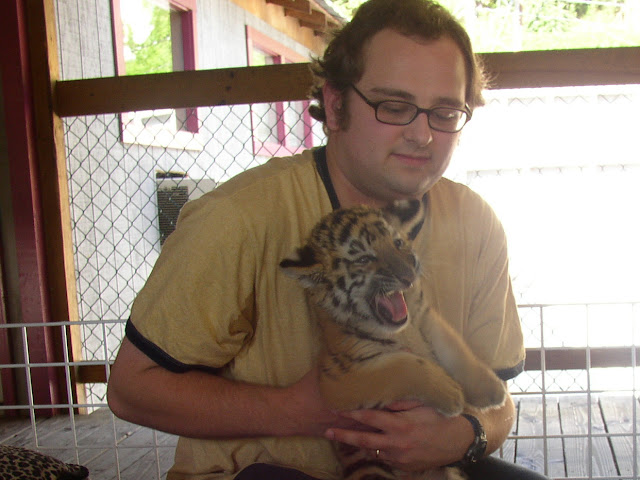 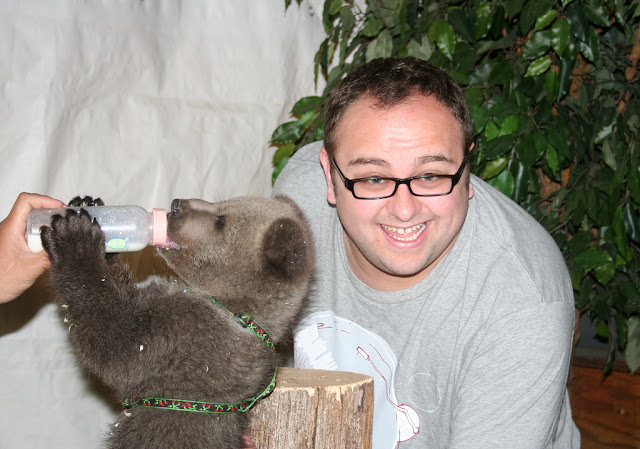 As I went to pet the bear, the Hispanic gentleman that was handling the bear instructed me not to touch his face.

"He doesn't like having his face touched?"  I asked.

Fell free to make up your own mind on the Bear Pits.  They are definitely a throw back to a type of zoo that is generally not seen in our modern culture.  Good or bad they are a pieces of roadside history. 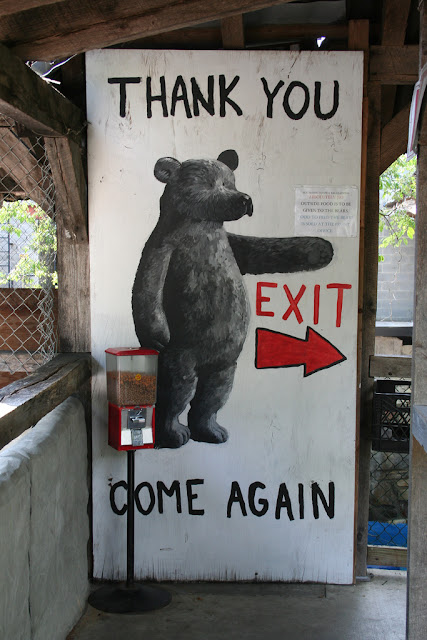 Please feel free to e-mail me at jacobthecarpetbagger@gmail.com
and check out my Flickr Photostream
Posted by Jacob at 10:22 PM