Straight Out of Fiji: The Merman 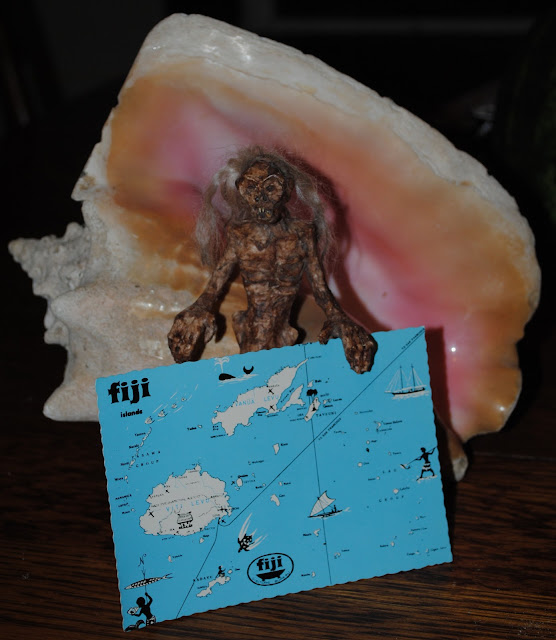 I am a man of many strange fascinations.  One of the things I am always on the lookout for is another Fiji Merman.

The Fiji Merman is an iconic sideshow attraction made famous by P.T. Barnum in the 1840s.  The merman was the upper-half of a monkey sewn to the lower part of a fish through the magic of Taxidermy.  The object was displayed as a genuine mermaid.  There were many imitations of the Fiji Merman and to this day they are still popular attractions in the few sideshows that remain.

I wanted to take a look at the different incarnations of this beautiful creature that can be found across America.

The Museum of Wonder is a bar in the nation's capital that just so happens to have the best collection of sideshow artifacts on the planet.  They have several Mermen on display.  Here is a re-creation of Barnum's original merman. 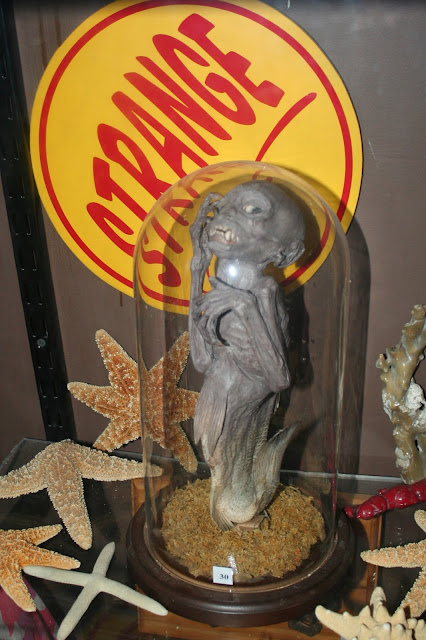 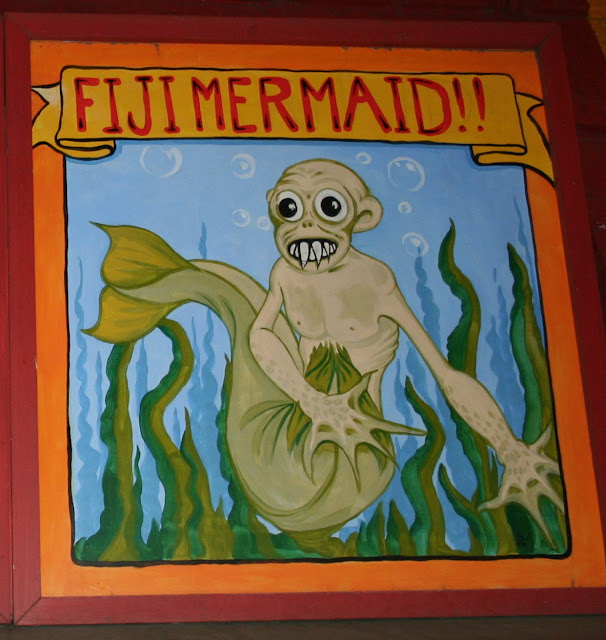 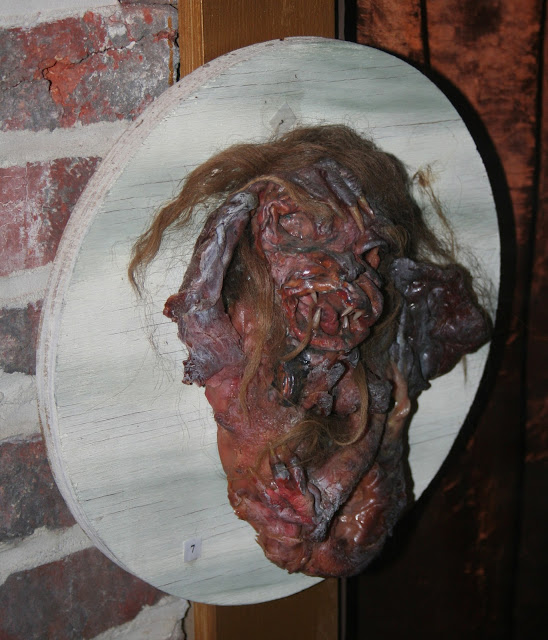 This large specimen is displayed alongside another cryto-taxidermic legend: The Fur-Bearing Trout.

And here is the terrifying "Sea Wurm" 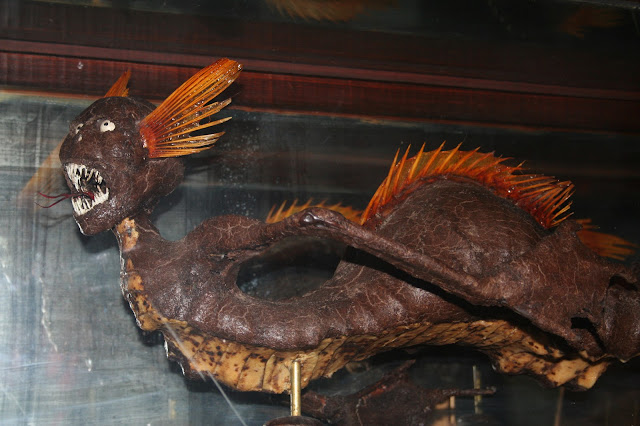 Ripley's Believe it or Not

Another wonderful place to spot Merman is at the various Ripley's Believe it or Not Museums that are spread across the tourist towns in this country.

This Mermaid I found out the Mountain State Fair in Fletcher, NC was in pretty rough shape.

While that kind of looks like a blob of nothing, it is part of the tradition of altering skates and rays to look like supernatural humanoid creatures.  Sailors used to catch them and alter them to sell to tourists as oddities.  This surely contributed in the creation of the Fiji Merman. 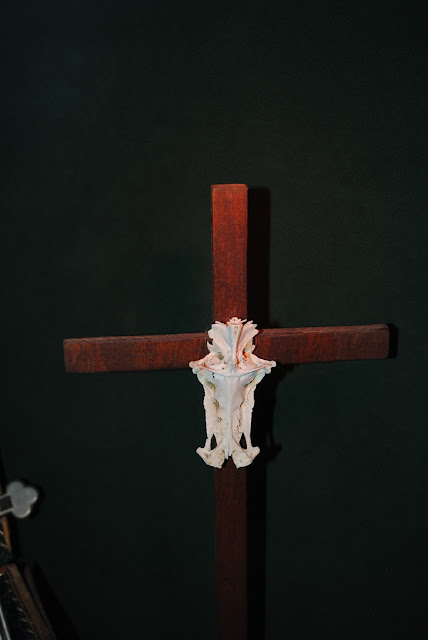 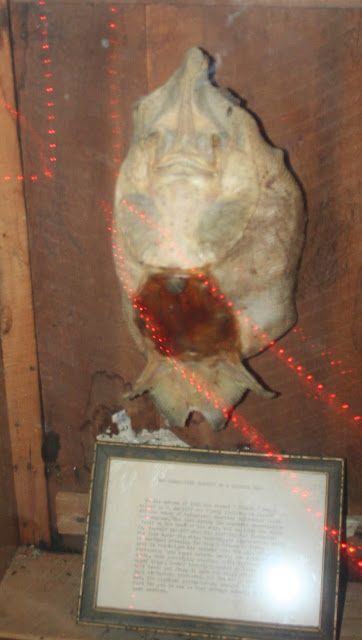 Here is a sideshow banner for "Misty, the Mermaid" at the Porter County Fair in Valparaiso, IN 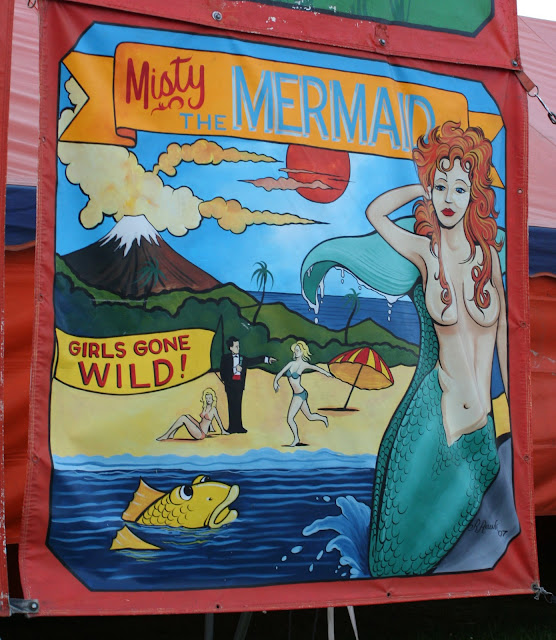 As is the tradition with sideshow banners, it is far more tantalizing then it is accurate.  Say hello to the actual "Misty". 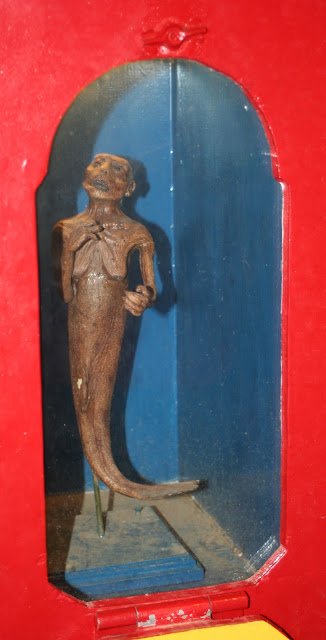 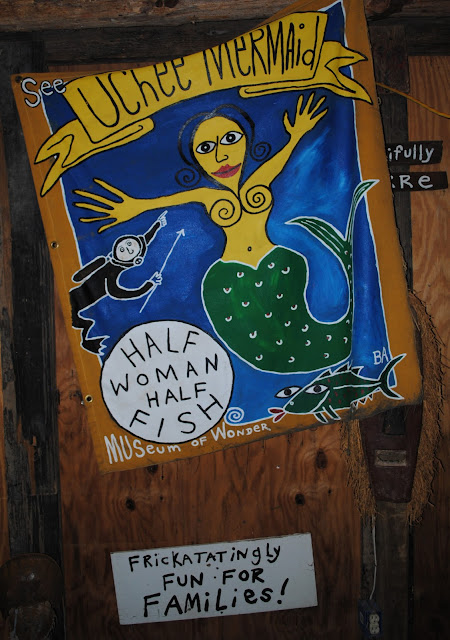 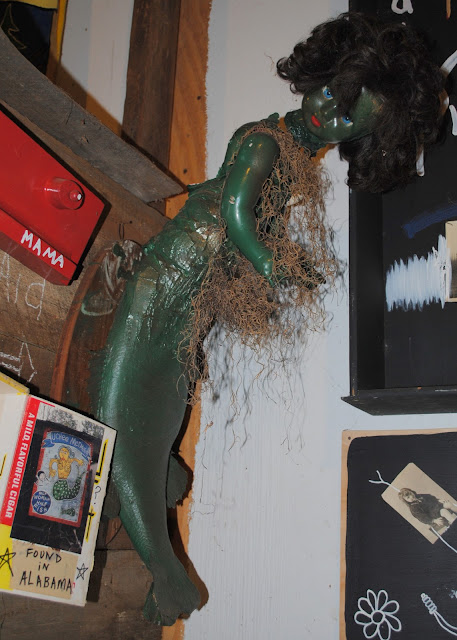 While visiting Butch's Museum at his yearly folk art festival "Doo-Nanny" I also had a chance to catch this bonus Merman that washed up after Hurrican Katrina. 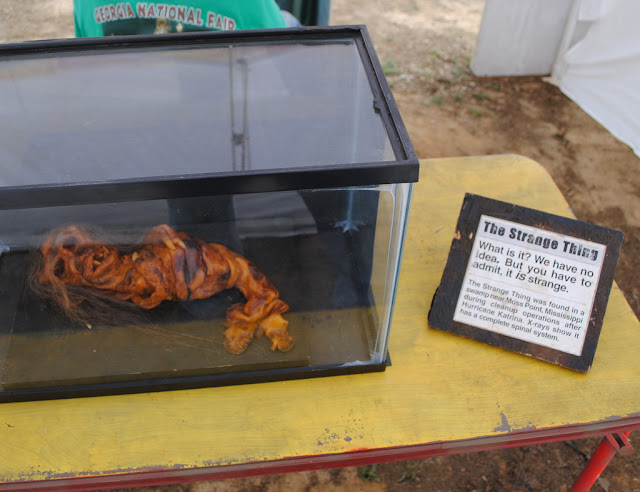 At the Abita Mystery House in Abita Springs, LA (another fantastic folk art museum) there lies several horrifying mermen mixed in with other strange and unusual creatures. 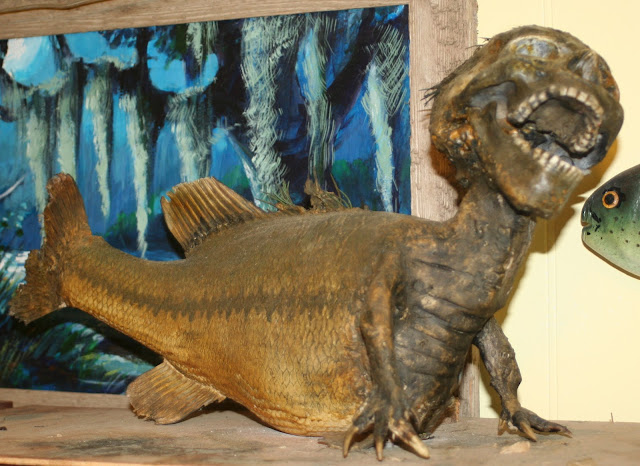 Of course I could go on and on about the wonders at this place.  Just check out me holding this Alligator Man. Of course I couldn't stand idly by.  I needed to possess my own mermaid.  I ordered my own mermaid off Ebay, which I dubbed "Fishbob".  I don't think he is actually made from a monkey and a fish, but I love him all the same. 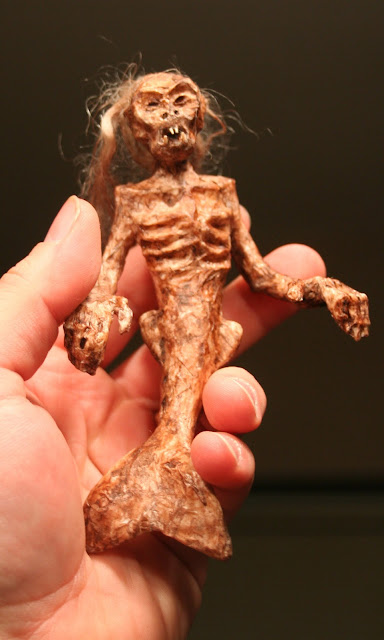 The Walt Disney Company is not one to be left out of the loop, and every real tourist destination needs a Fiji Merman.  Walt Disney World has its own Fiji Merman, while they kept true to its origins, I must say they have altered the "feel" quite a bit. 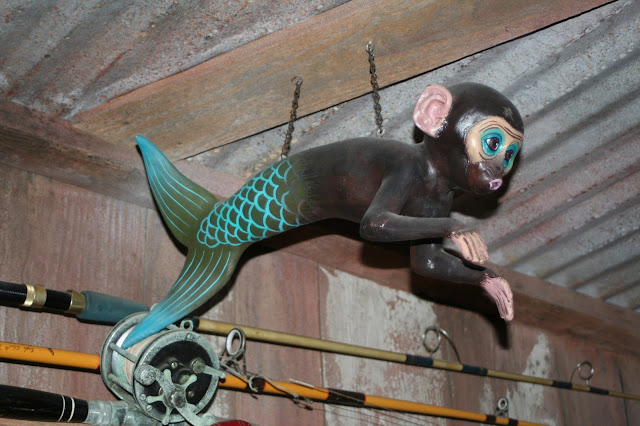 Of course, this blog is about the South I wanted to end with a True Southern Merman. 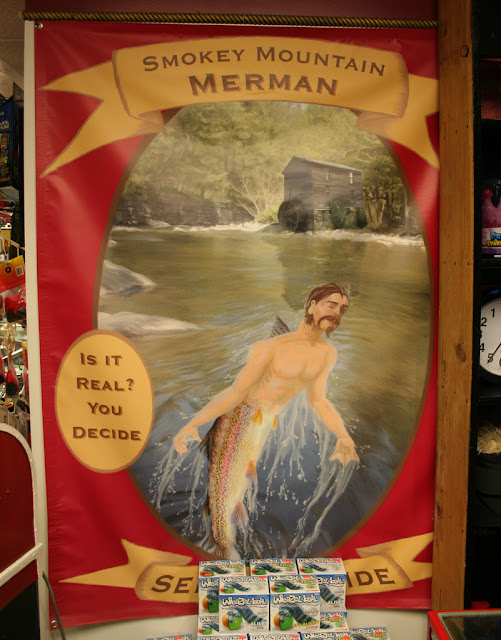 Check him out.  First of all he is part rainbow trout, which is pretty awesome, not to mention his sweet facial hair.  Instead of swimming the open ocean he prefers to stick to Mountain streams and swimming around grist mills.

For only a quarter you can look at Cletus for a few precious seconds through this viewfinder. 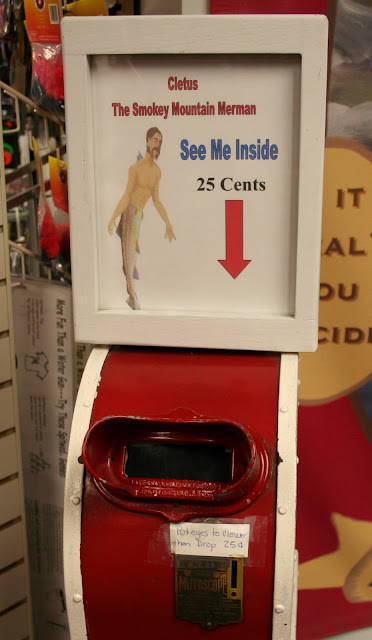 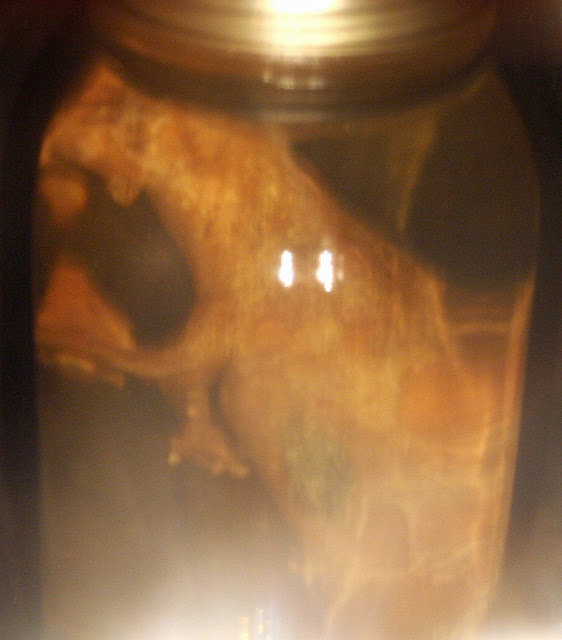 Please feel free to e-mail me at jacobthecarpetbagger@gmail.com
and check out my Flickr Photostream
Posted by Jacob at 8:06 PM