One thing I noticed when I moved to the Mountains of North Carolina.  No matter where you went there was someone carving a bear out of a log with a chainsaw. 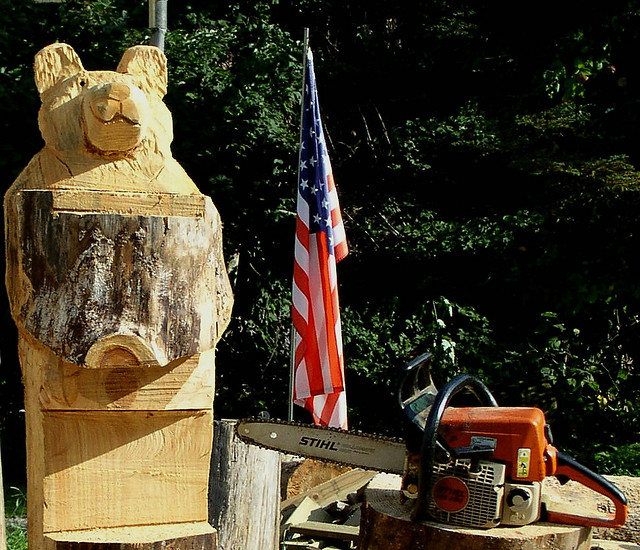 Of course in every art form there can only be one king.  In the world of chainsaw art that man goes by the name "Tree Carver".  If you doubt his claim, just talk to him for 10 minutes.

I met Tree Carver (Not his real name of course) while working at a local hotel.  Tree would spend weeks at a time staying at the hotel, despite stating he had a home very near.  He told me he had a pet wolf that he kept in his van, but I never saw him.  Tree enjoyed stopping in the lobby and chatting.

I don't know how many times he told me "You know I am world famous, right?"  Tree told me he was three time world chainsaw carving champion.  Tree also asserted that he won the world ice carving championship in Alaska despite never having done ice carving before.  He claimed to have done commissioned work for a long list of famous people including Elvis Presley.  Several nights he showed up to tell me how he was working on a project for George Clooney who had recently purchased a house in the area.  He showed me his call log on his cell phone which included calls labeled "George".   He claimed to have millions of dollars in the bank.

He would always bring in photocopies of local newspapers that featured stories about the work he was currently doing.  He had a gallery on the side of the road that displayed some of his work.  The centerpiece was a work-in-progress giant wooden Indian.  At the time he was also in the paper for creating a giant wooden Scotsman for a local country club.

Tree would show up after work and tell tales of how he told off the annoying country club manager.  Tree said he told him that if he ever spoke to him again he would not finish the Scotsman.

The manager of the hotel had told me that Tree could no longer stay at the hotel unless he caught up on his bill.  He had a habit of coming and going without paying.  When I told Tree about this.  He was furious.  "Does she know who I am?"  He growled.  "I have millions of dollars I could buy this place."

Every night at the hotel we would put out plates of cheese and complimentary wine for the guests.  Tree was a huge fan of the wine and would always stand by the sit and chug a few glasses.

One Christmas Eve Tree sat in the lobby for hours.  He guzzled wine.  Through his purple lips he muttered about being made to pay his bill.  "How could she insult me like this?"  Tree complained, he had become totally fixated on the fact that he had been made to pay for his room in advance (which was a policy that applied to all guests).   Tree continued to drink wine as night grew late.  I was wanting to close up for the night, but I couldn't tell a guest to leave.  I started getting slightly irritated as I wanted to go home and spend Christmas with my family.

Finally, Tree stood up.  "I may have millions of dollars in the bank," he said, "but I am spending Christmas Eve in a hotel room.  You are a luckier man then me."  Tree went back to his room.  I left the hotel shortly afterwards and never saw Tree again.

His roadside art display vanished leaving only the half finished Indian behind, pushed over and abandoned in the bushes. 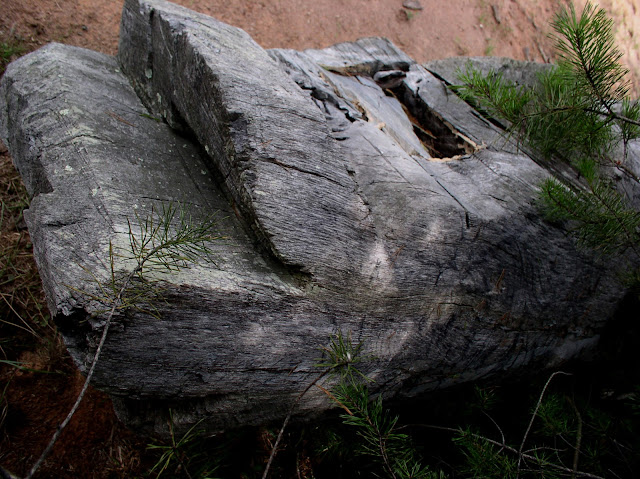 I did find another display of his in Cashiers a few years back, proudly pronouncing him as 3 time world champion, but tree was nowhere to be found. 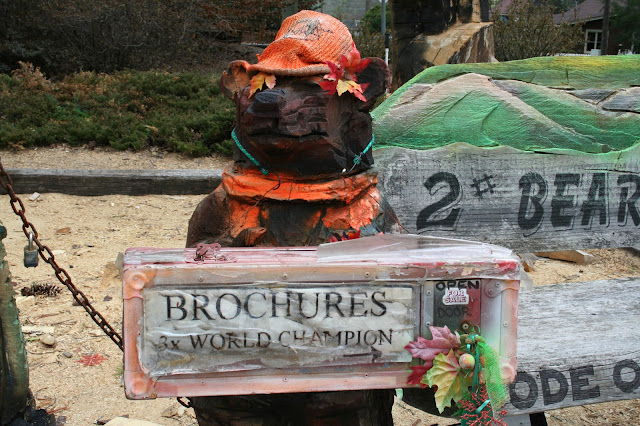 I have searched for information on Tree on the internet and come up with very little.  As far as I can tell there is no World Chainsaw Championship.  I did find and online message board for the "United Chainsaw Carvers Guild", where they discussed Tree briefly.  Some backed up his claims, while others stated that he was unstable and rude.  One person claimed that Tree was now living in his van.

What I can confirm was that Tree was commissioned to create a Giant Wood Carving of Sir Walter Raleigh, which depending on who you ask was listed in an edition of Guinness World Records as the World's Largest Wooden Sculpture.  Apparently, it was set to stay at a mall in Charlotte, but Tree had a falling out with the management and moved it to Manteo, NC.  No information on whether or not the statue still exist.

I don't know if everything he said was true and he was probably the least humble person I ever met, but he had a larger then life personality and that is something I can always appreciate.