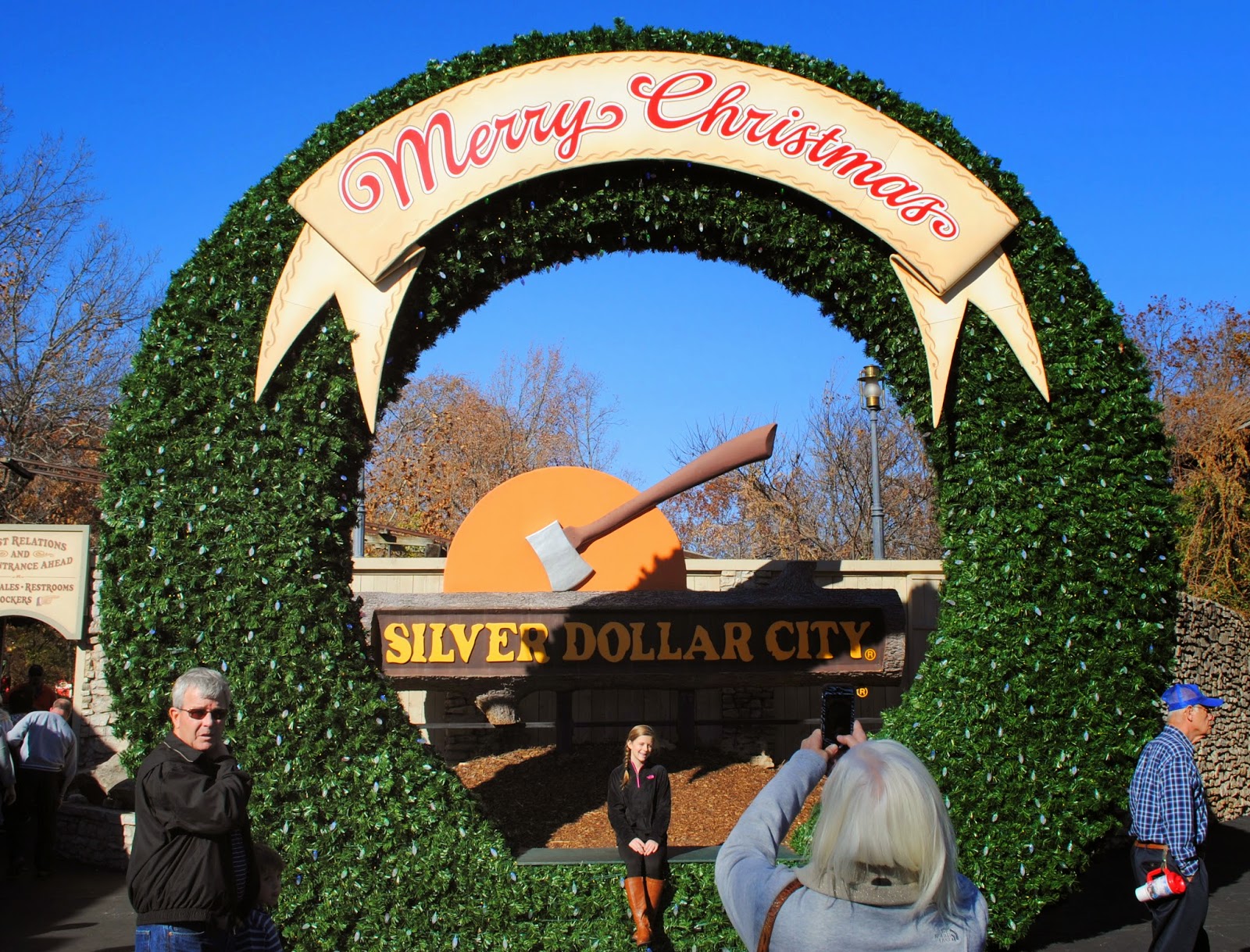 I wrote about my favorite parts of Dollywood awhile back.  The park itself is pretty slick and modernized, but there are a few old school touches that I totally love.  My absolute favorite is the totally retro old school dark ride/roller coaster "Blazing Fury."   Check out my Dollywood article for a full recap of this amazing ride along with a photo gallery and a video POV ride through.

In fact, check out the POV here.


Also why your at it, check out Adam the Woo's video on the history of the ride, which is very good.

I am totally in love with this ride, so I was quite intrigued when I heard that at one point there was another dark ride at Dollywood known as "The Flooded Mine".  This ride was said to have been inspired in theme somewhat by the "Pirates of Caribbean" ride at the Disney Parks.  Instead of pirates they had prisoners.  The theme of the Flooded Mine, was a group of prisoners trapped in a slowly flooding mine, singing about their inevitable death.

The management of the park was said to have shut down the ride when it was determined that the theme was just to depressing.  Again, the theme of the ride was prisoners drowning.   So, the flooded mine was closed and later completely demolished.  The only thing that remains is an easter egg inside of Blazing Fury. 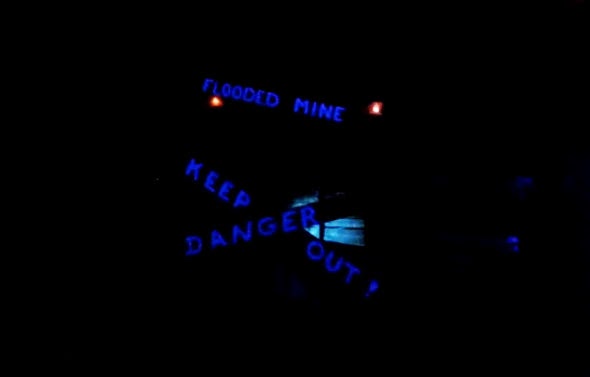 Both of these dark rides were created in the brief period of of time between 1977 and 1986 where the park was called "Silver Dollar City Tennessee".   The original Silver Dollar City, is in Branson, MO and is still very much in operation, and it still has both the Flooded Mine and "Fire in the Hole" which is the original version of Blazing Fury.

As I went on my recent roadtrip I originally had not intended on going to Silver Dollar City, but the appeal of seeing both these classic dark rides drew me in.  I had to see them.

Silver Dollar City opened its doors in 1960, but prior to that it was actually a cave attraction known as "Marvel Caverns" that had opened way back in 1894.  They still give tours of the Caves.  Before the tour they give you a demonstration of the tightest part of the tour.

They also let you know that you will have to crab walk 7 feet at in a tunnel this small, which turned away a fair number of guests.  To me this is slightly horrifying, but not a deal breaker.  In the end I ended up skipping the cave tour, as I had been on cave tours before and assumed them to all be the same.  I ended up regretting this, as Marvel Caverns is supposedly pretty awesome.

Now, Silver Dollar City is still like Dollywood in many ways, it has a down-home, old timey, "heritage" theme. 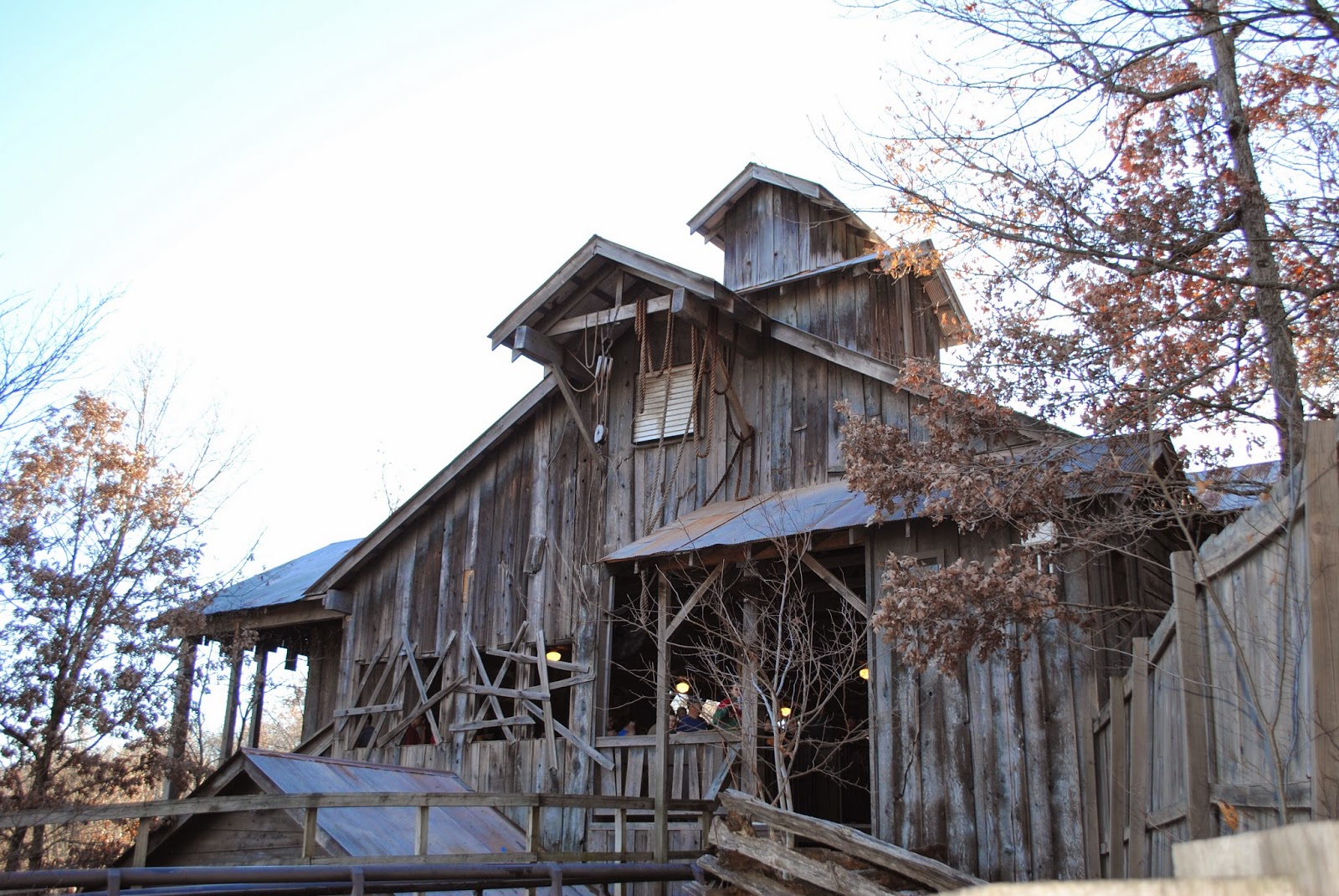 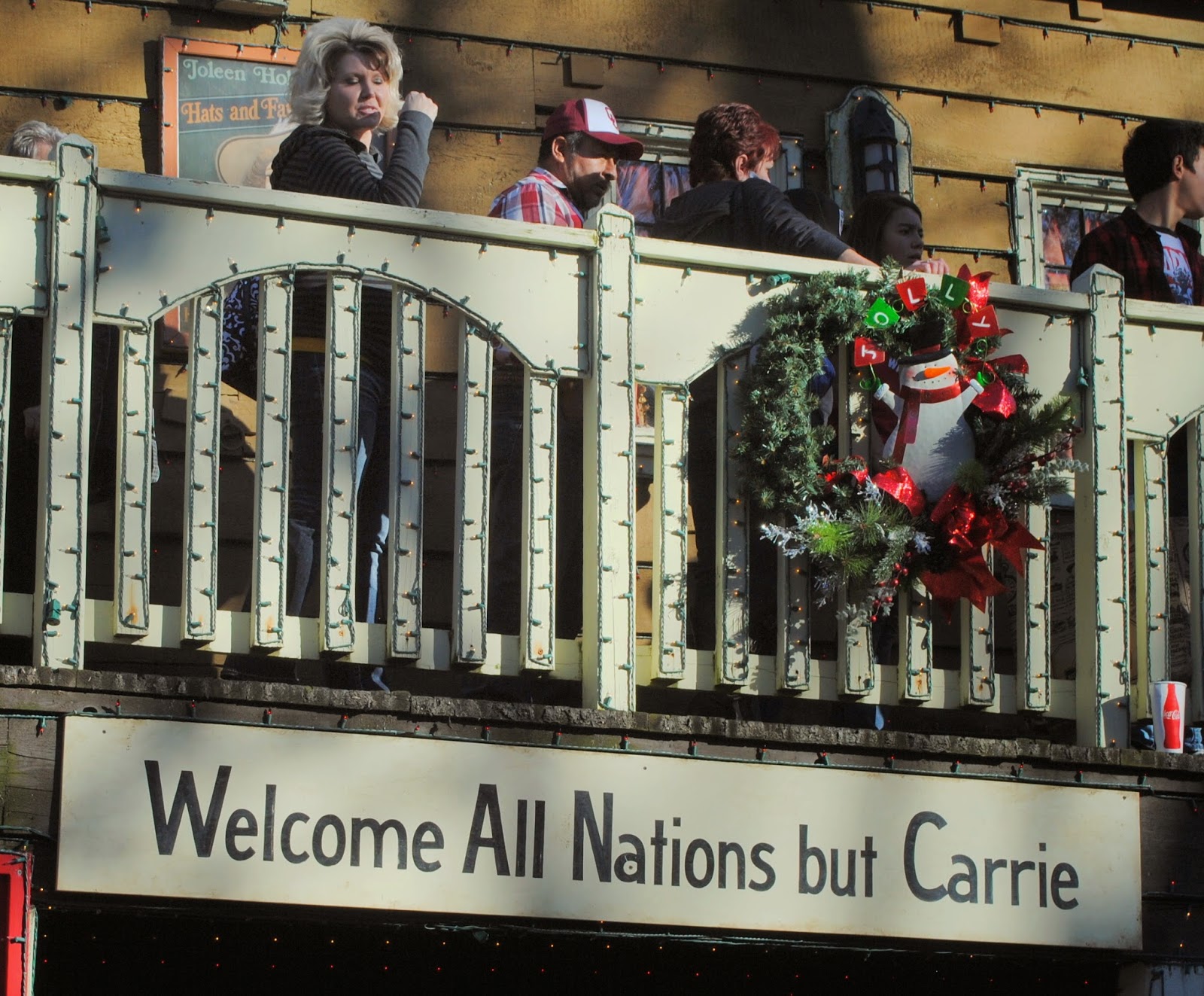 Oh yeah, and its incredibly crowded...... 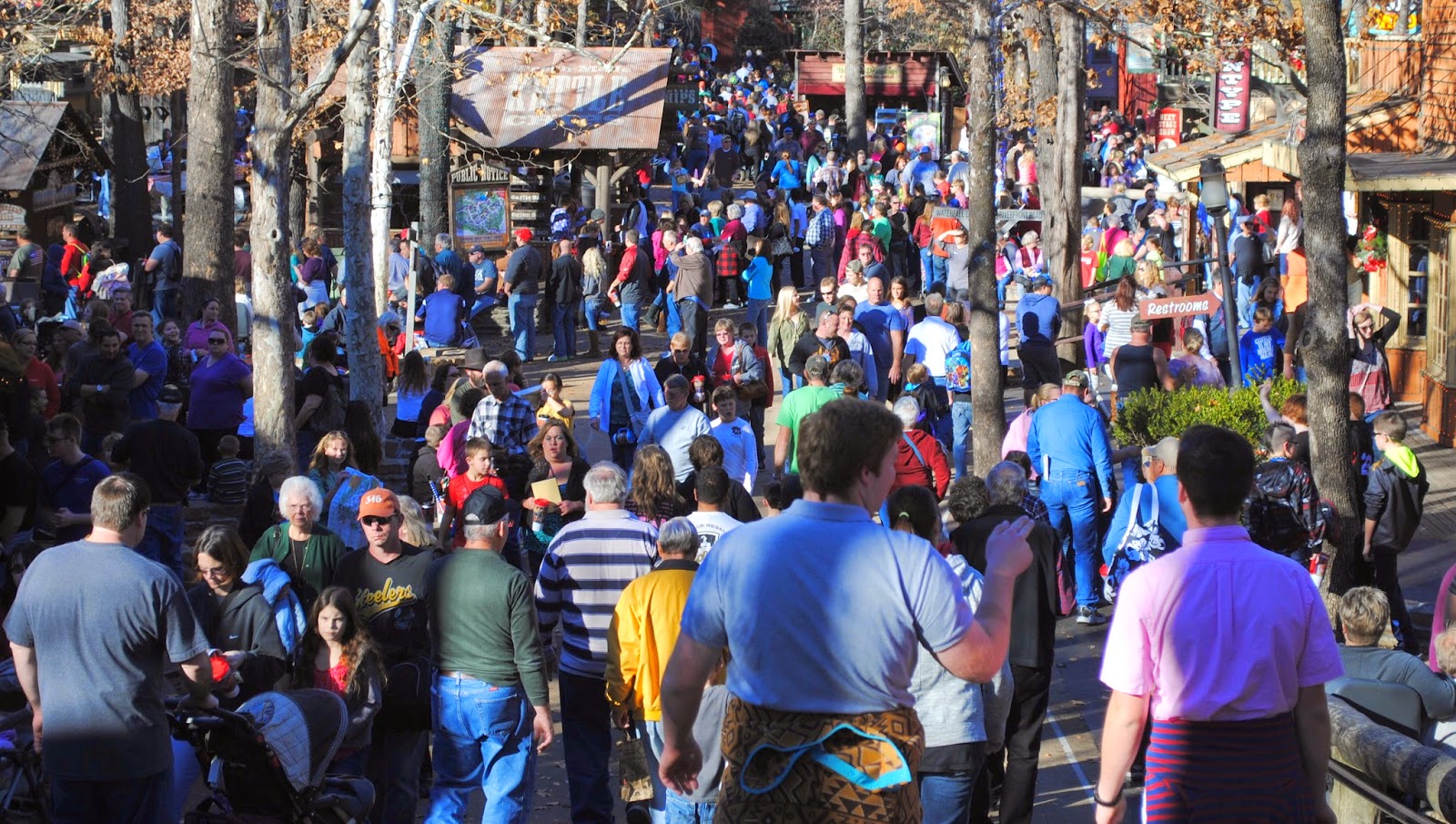 Now, I did ride a rollercoaster or two while I was here, but my main goal was to check out these sweet old school dark rides.

First stop:  Fire in the Hole. 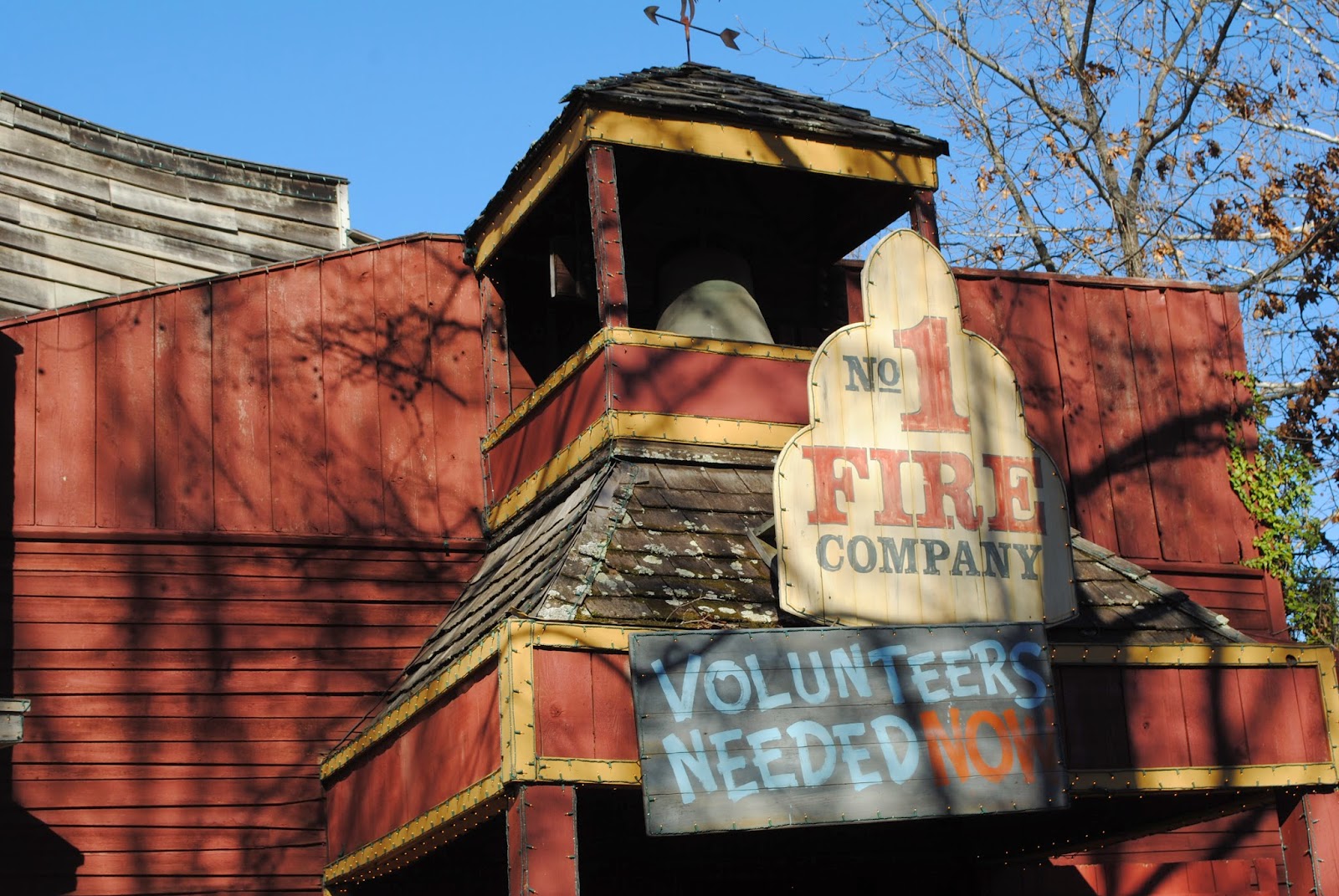 Now, unsurprisingly, the themeing is very similar to Blazing Fury.  The fire fighting theme is there, but as you walk into the queue you start to notice some strange differences. 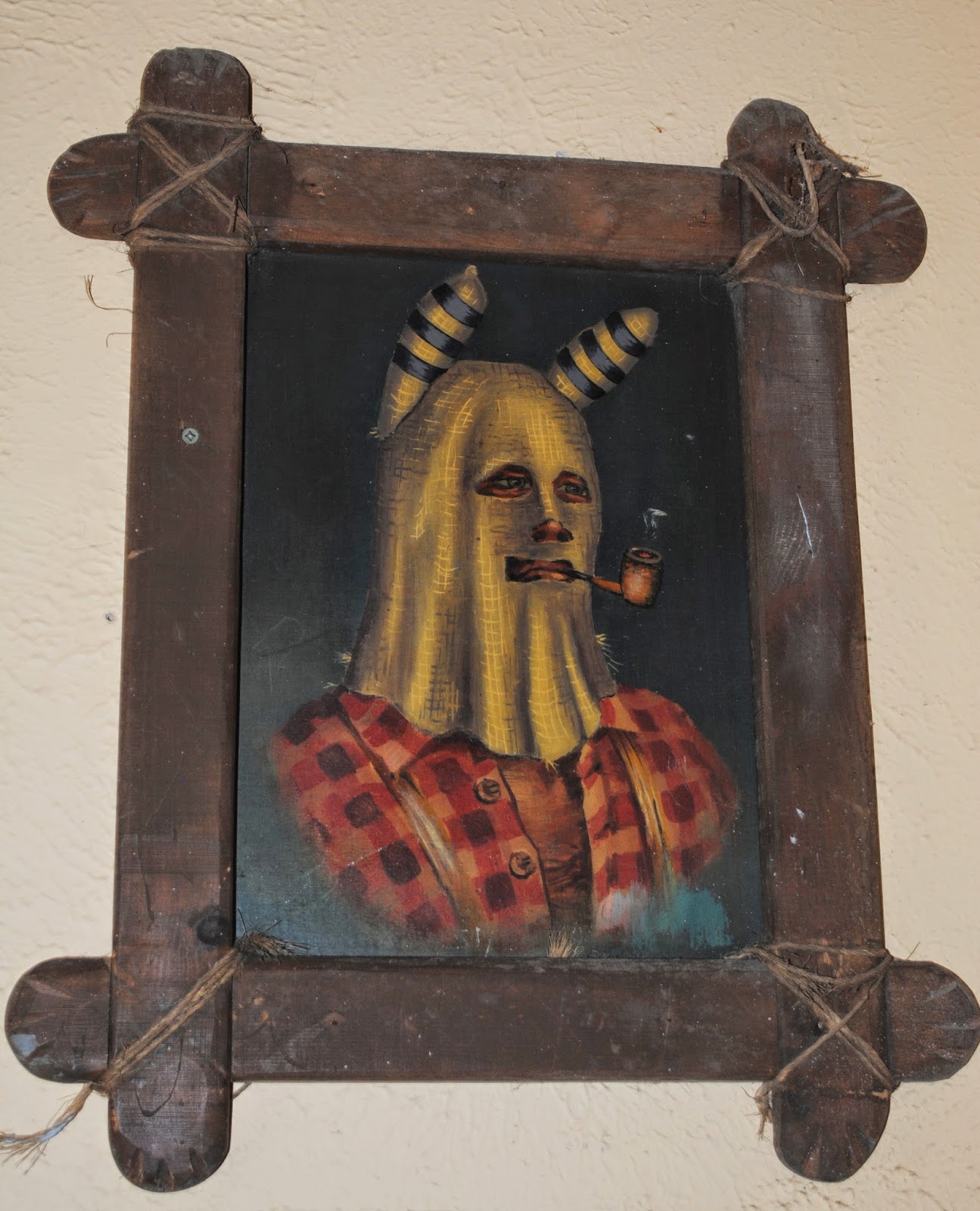 You see, while it has the same "burning Mountain village" theme of Blazing Fury, this ride is themed around an attack by "Baldknobbers".

"What's a Baldknobber?"  you may ask.  I asked the same thing, and had to do some research on this subject.

So, basically Baldknobbers were an anti-confederate militia that sided with the North before, after and during the Civil War.  They wore strange hoods that were tied off in horns, giving them a devilish look.  They were almost a bizzaro KKK.  Apparently the Ozarks tended to lean towards the confederate side in the Civil War, so the Baldknobbers were seen as villains.  So, in this ride the Baldknobbers are portrayed as terrorists burning down a poor innocent town.

I'm not sure if the Tennessee version ever included Baldknobbers, as most people in the Smoky Mountains would not even know what a Baldknobber is.  In its current incarnation, we never see who started the fire in Blazing Fury, but I have heard that during the Cold War they had Russian villains in the ride.

The ride itself has an almost identical layout to the Dollywood Version.  The only major differences are the Baldknobbers and its also missing some of the Hillbilly humor of the Tennessee Version.  Sadly, I was not able to do a POV video, because the ride is faster and darker and my video looked like crap.   I was able to snap a few pictures though. 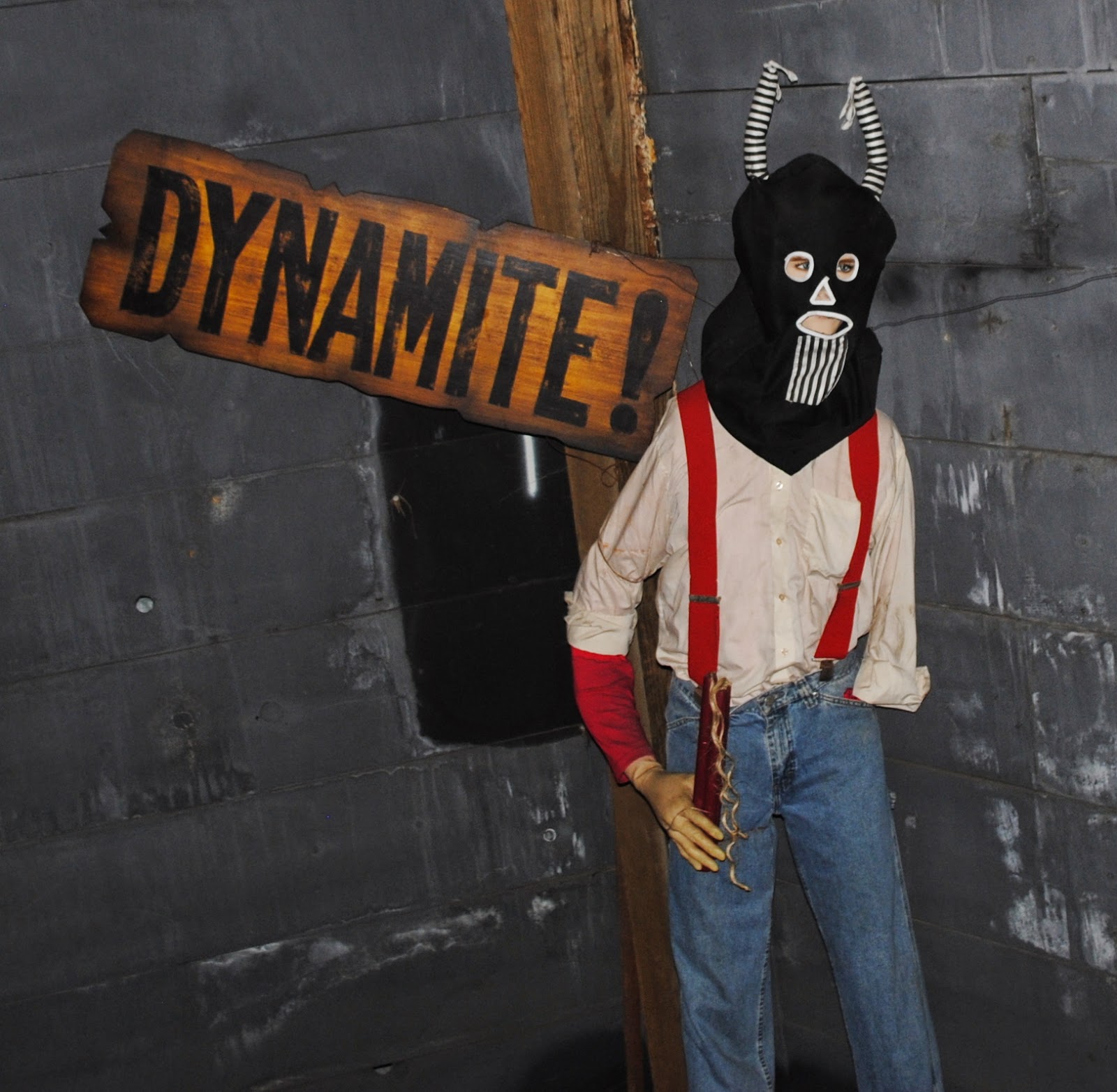 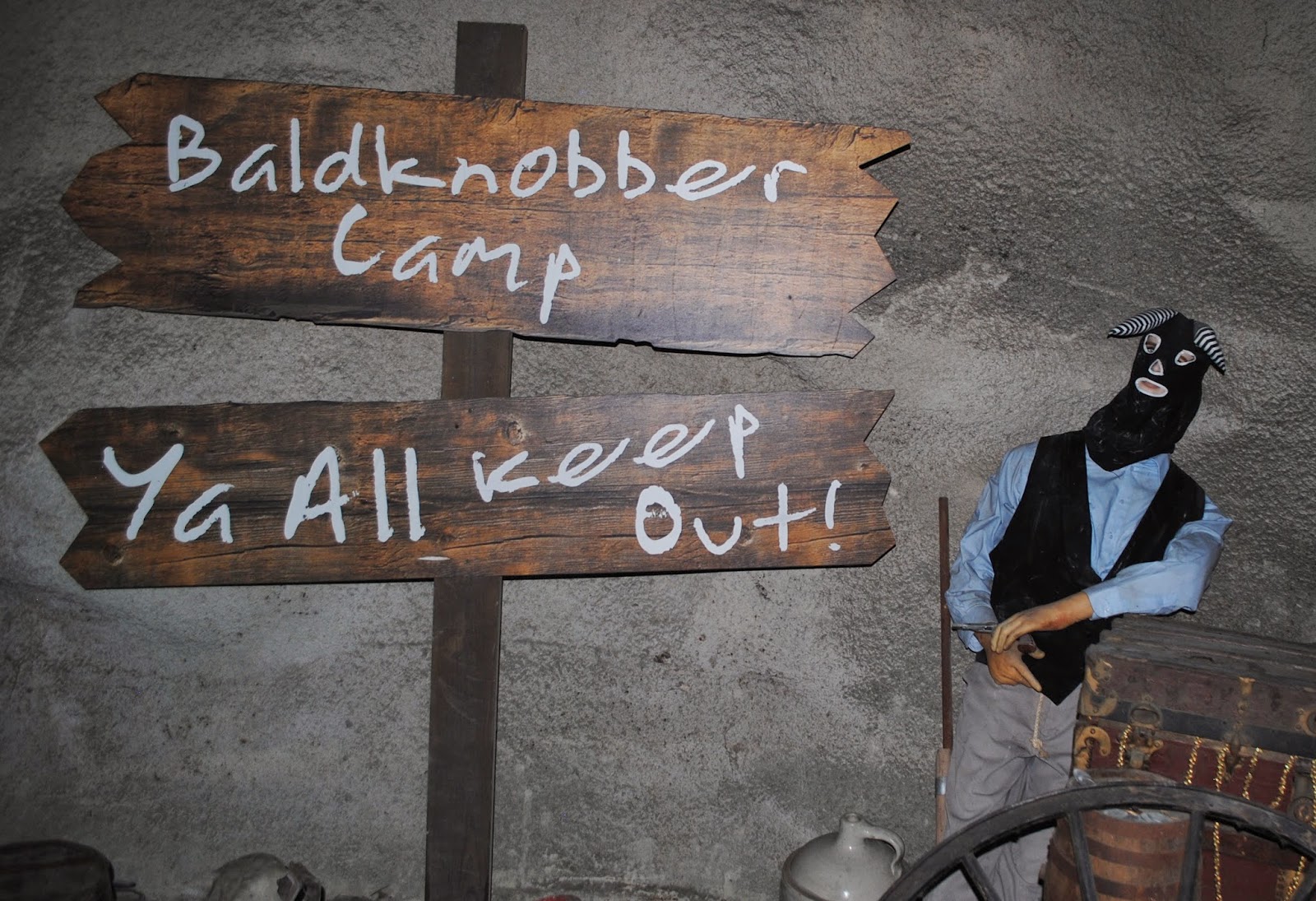 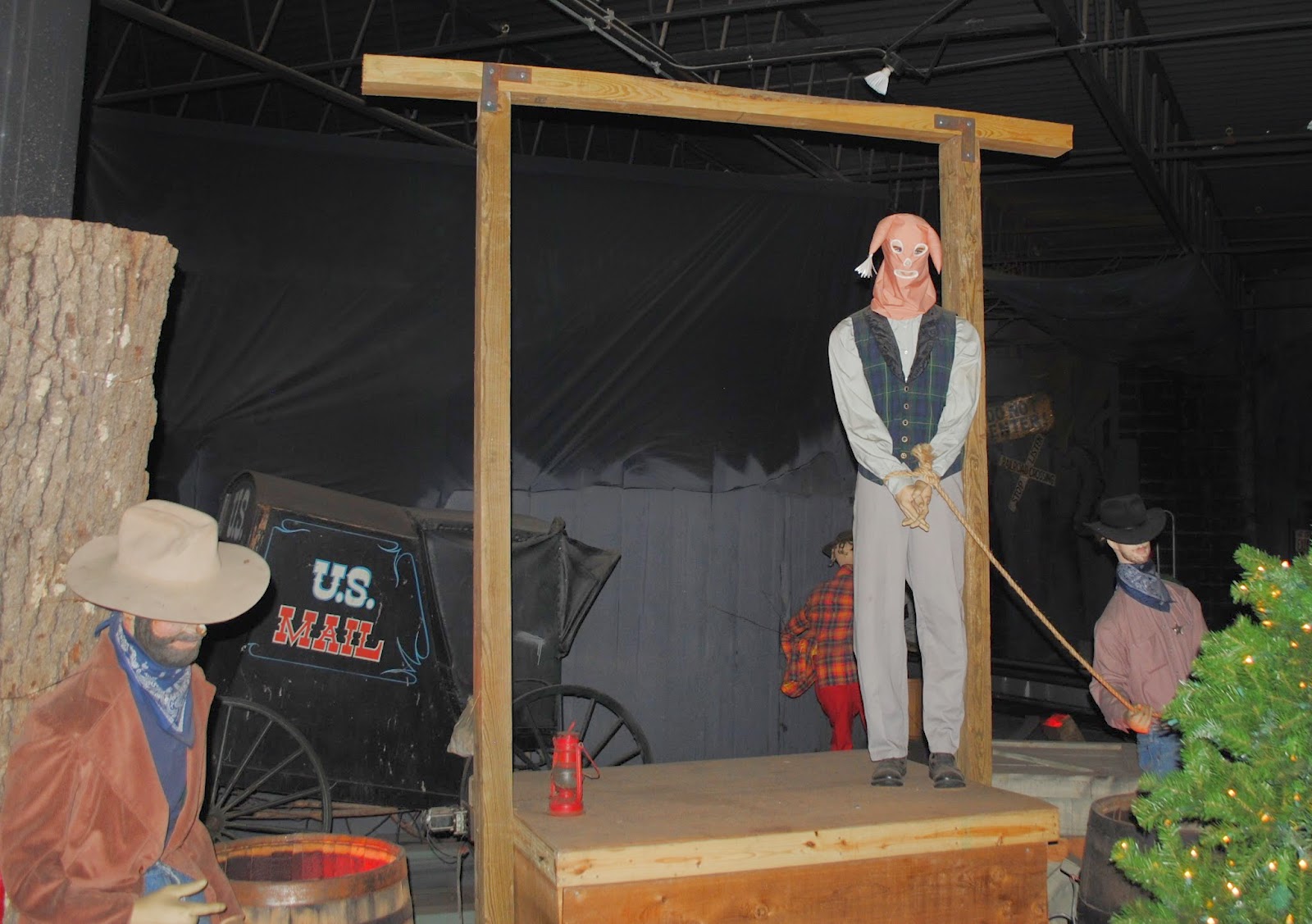 To end on a cheerful note, despite having tons of crazy roller coasters,  Fire in the Hole is the only ride to ever have a fatality at either Silver Dollar City or Dollywood.  One of the cars was accidently diverted into the storage area while guests were riding.  Unfourtanetly the storage area is for cars only, not people, so it had a low overhang.  It knocked their heads off.

So, that brings us to the legendary Flooded mine. 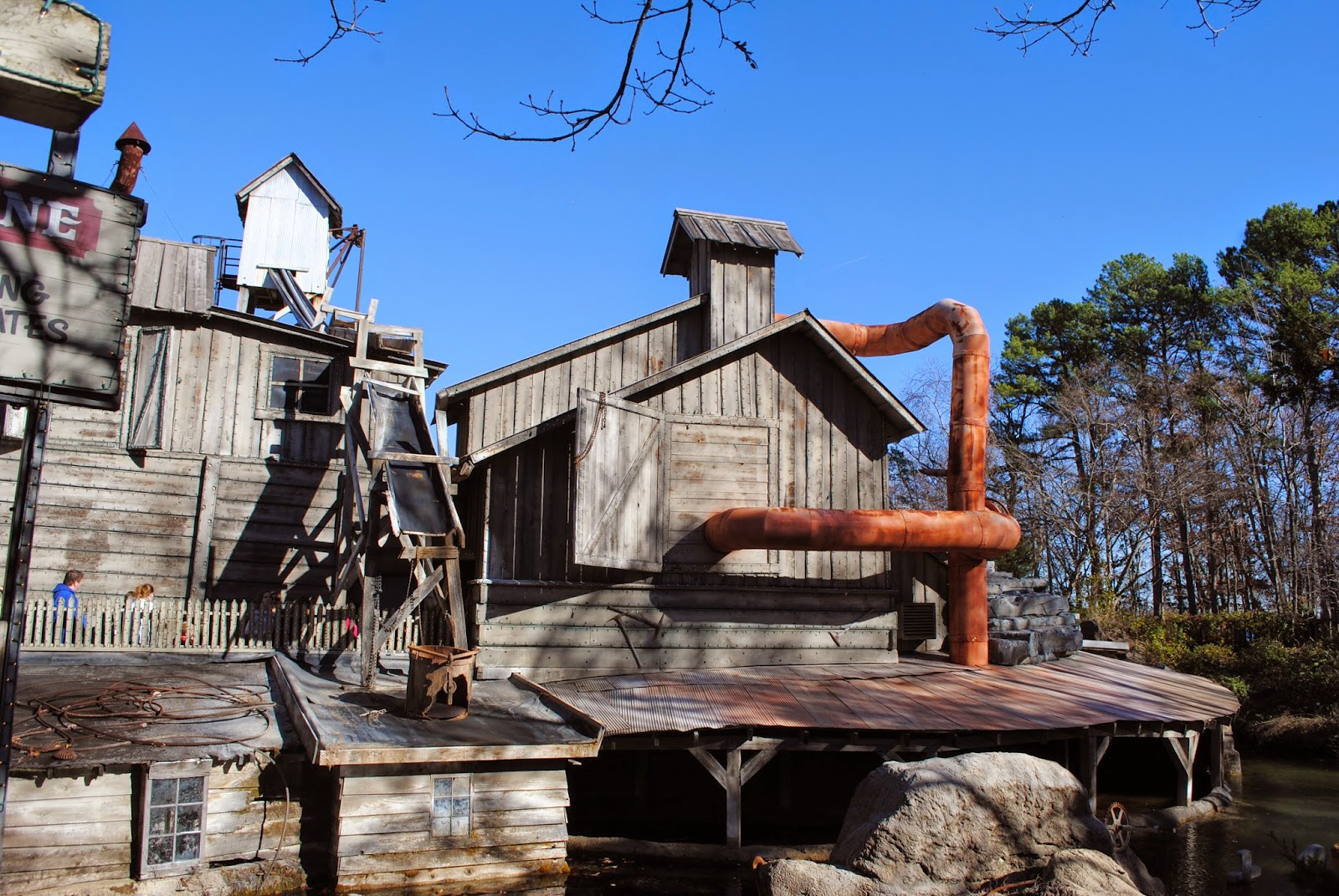 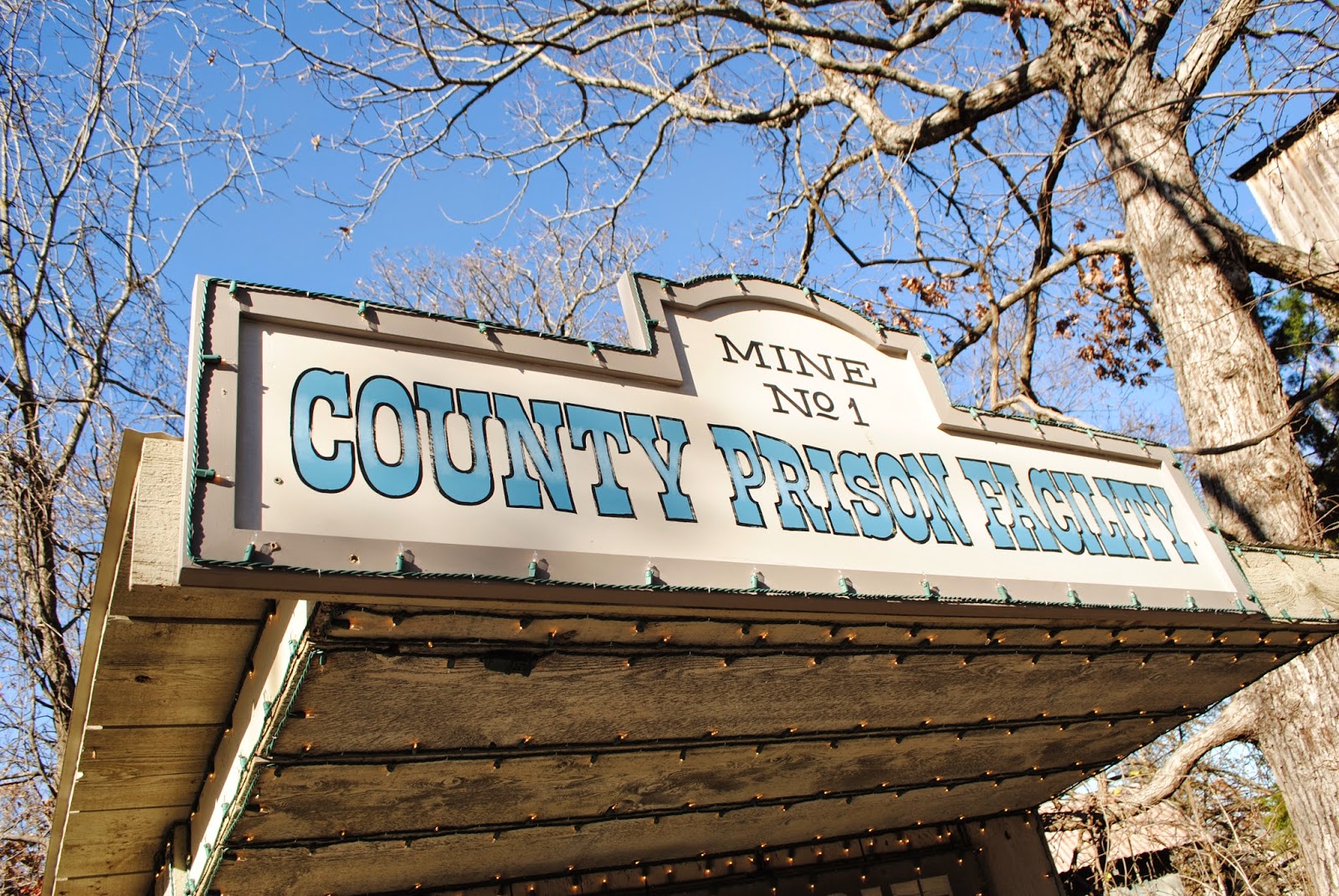 First of all, the ride is still an awesome old school dark ride.  One thing they have changed is that they added light guns to the ride and made in into a sort of moving shooting gallery.  I'm a dark ride purist, so I would rather they left this off and just let you enjoy the ride for what it is. 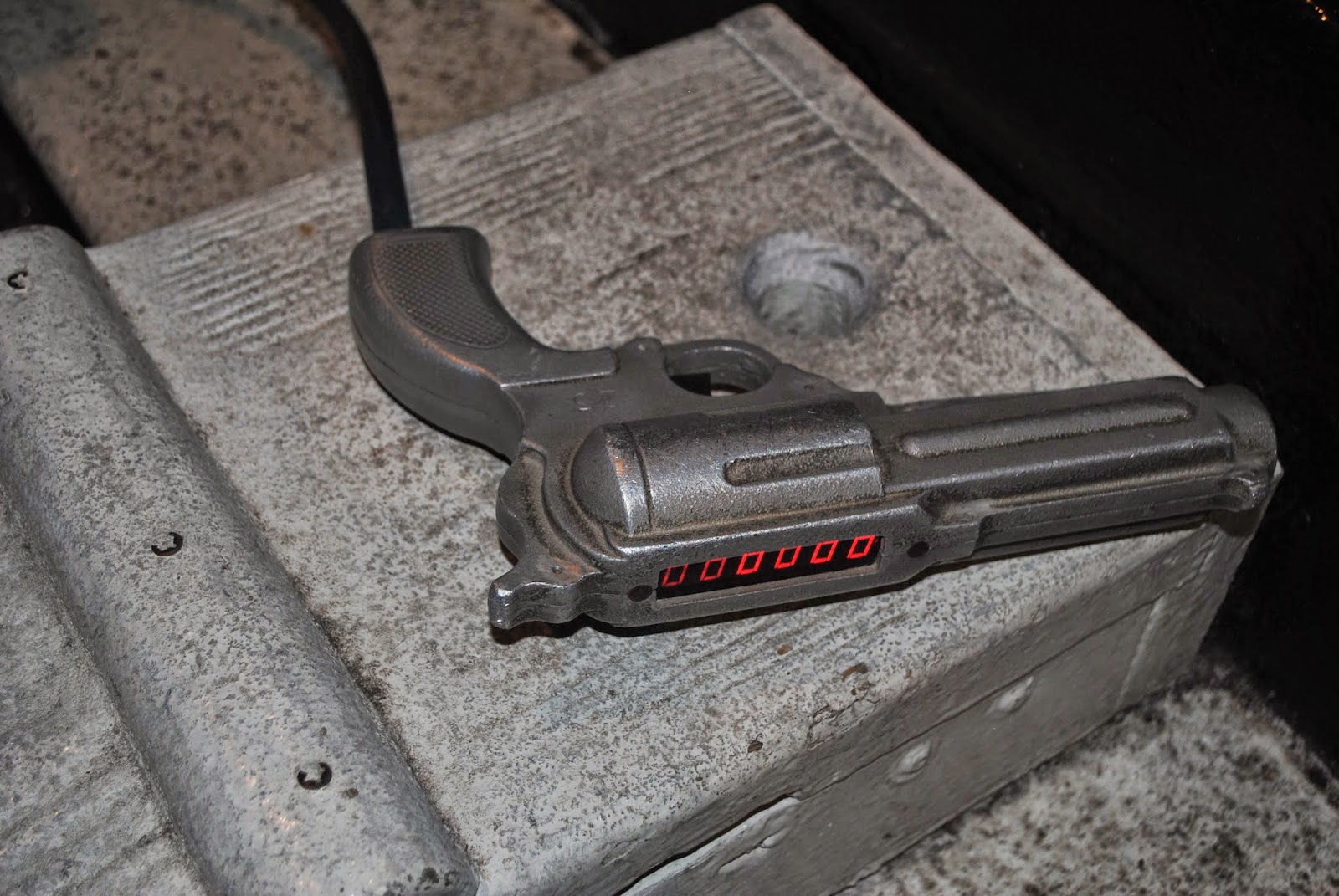 That said, I find this change pretty hilarious.  In Tennessee that shut the ride down because the idea of prisoners trapped in a mine to be to depressing.  In Missouri they thought, "You know what would be even better, if you could shoot at them!"

Anyways, this ride is a trip through dark ride glory. 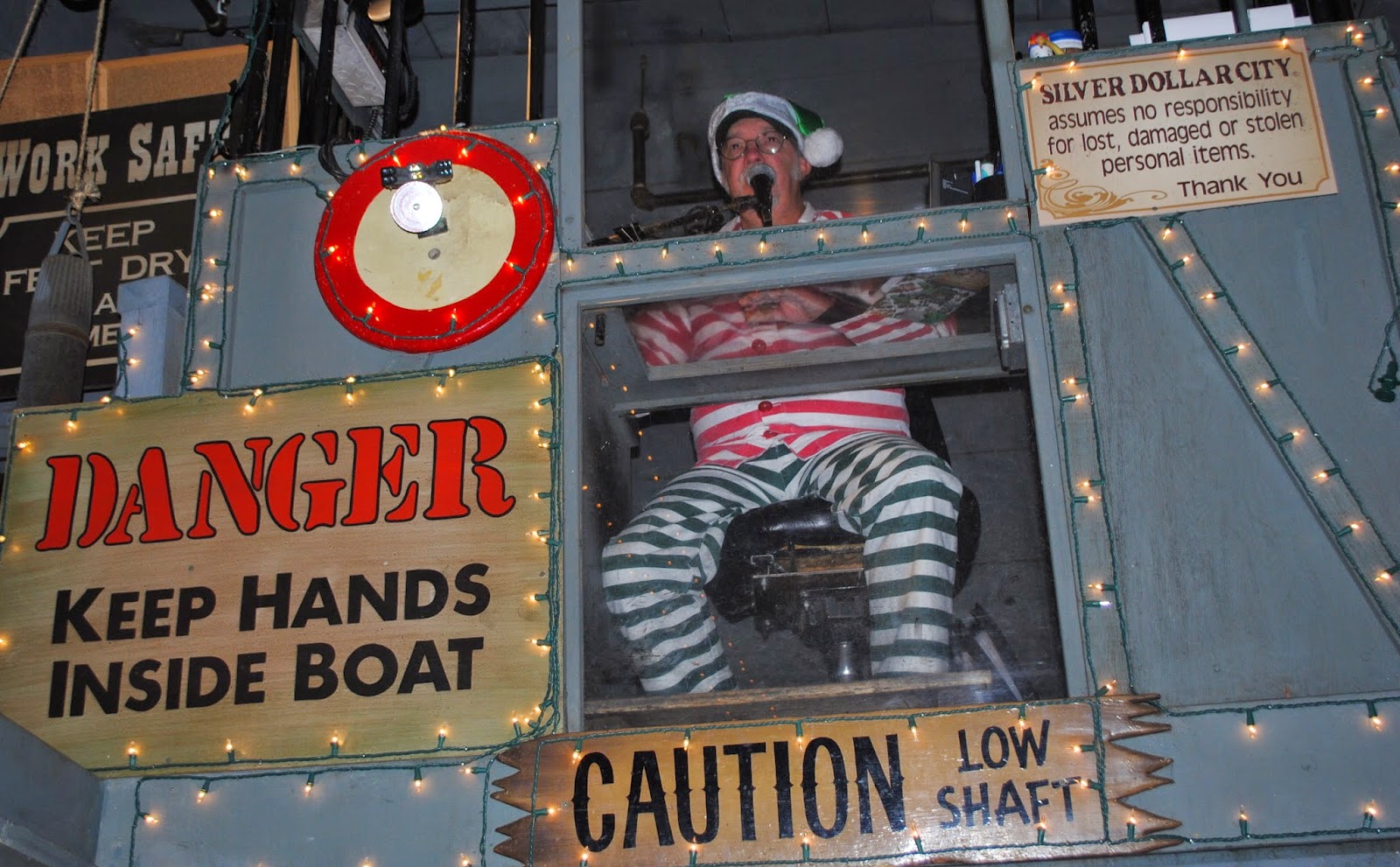 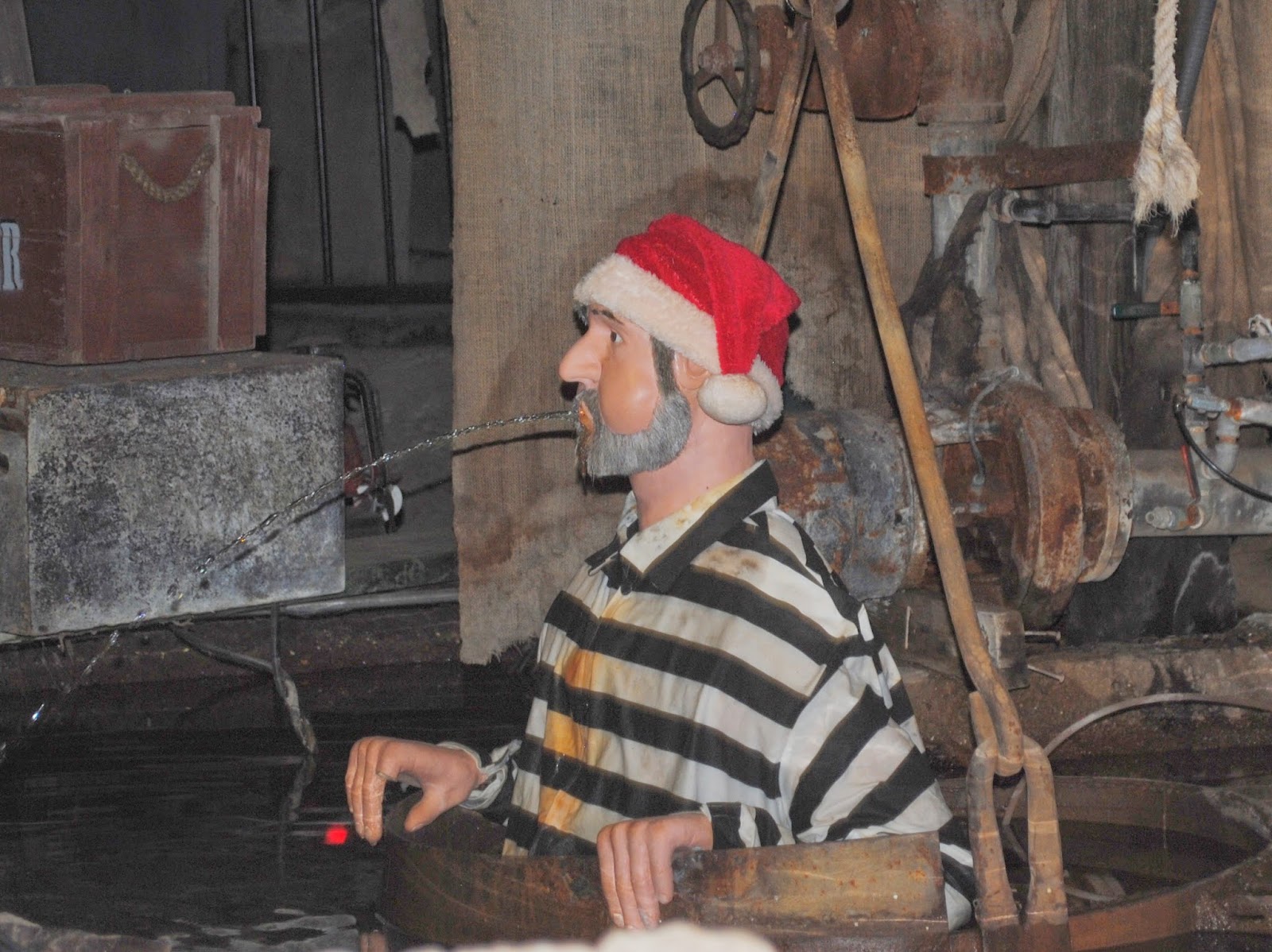 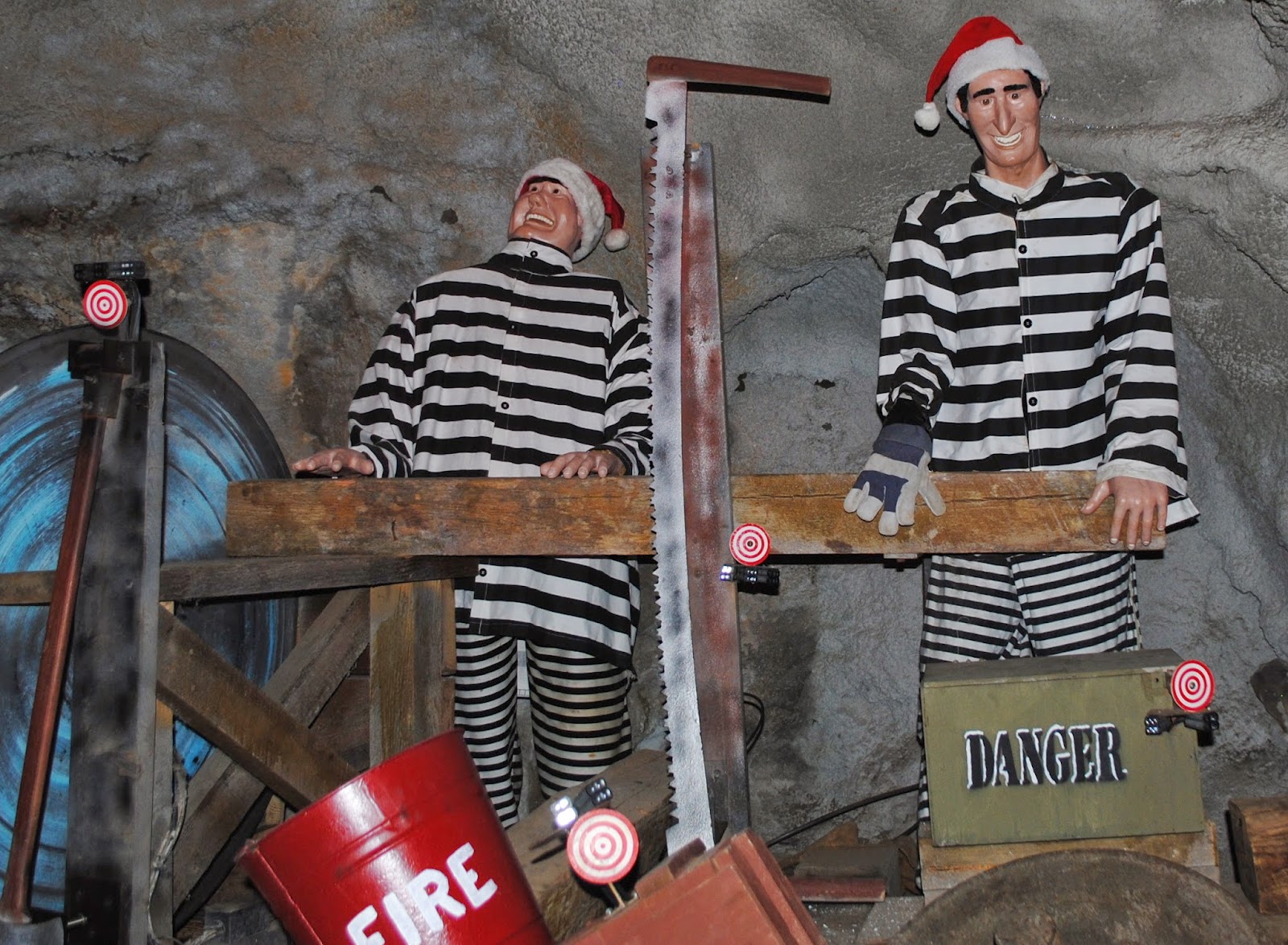 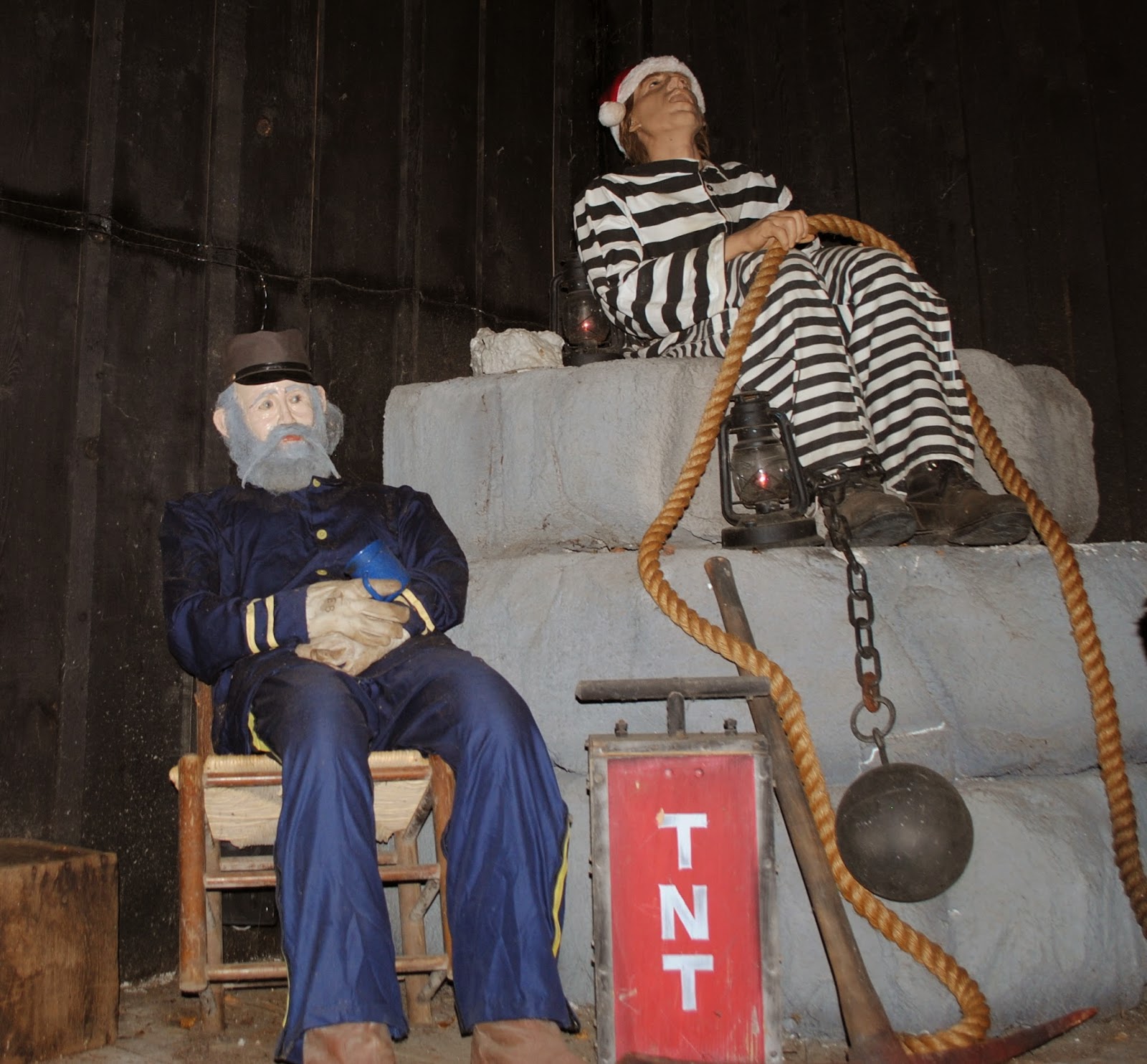 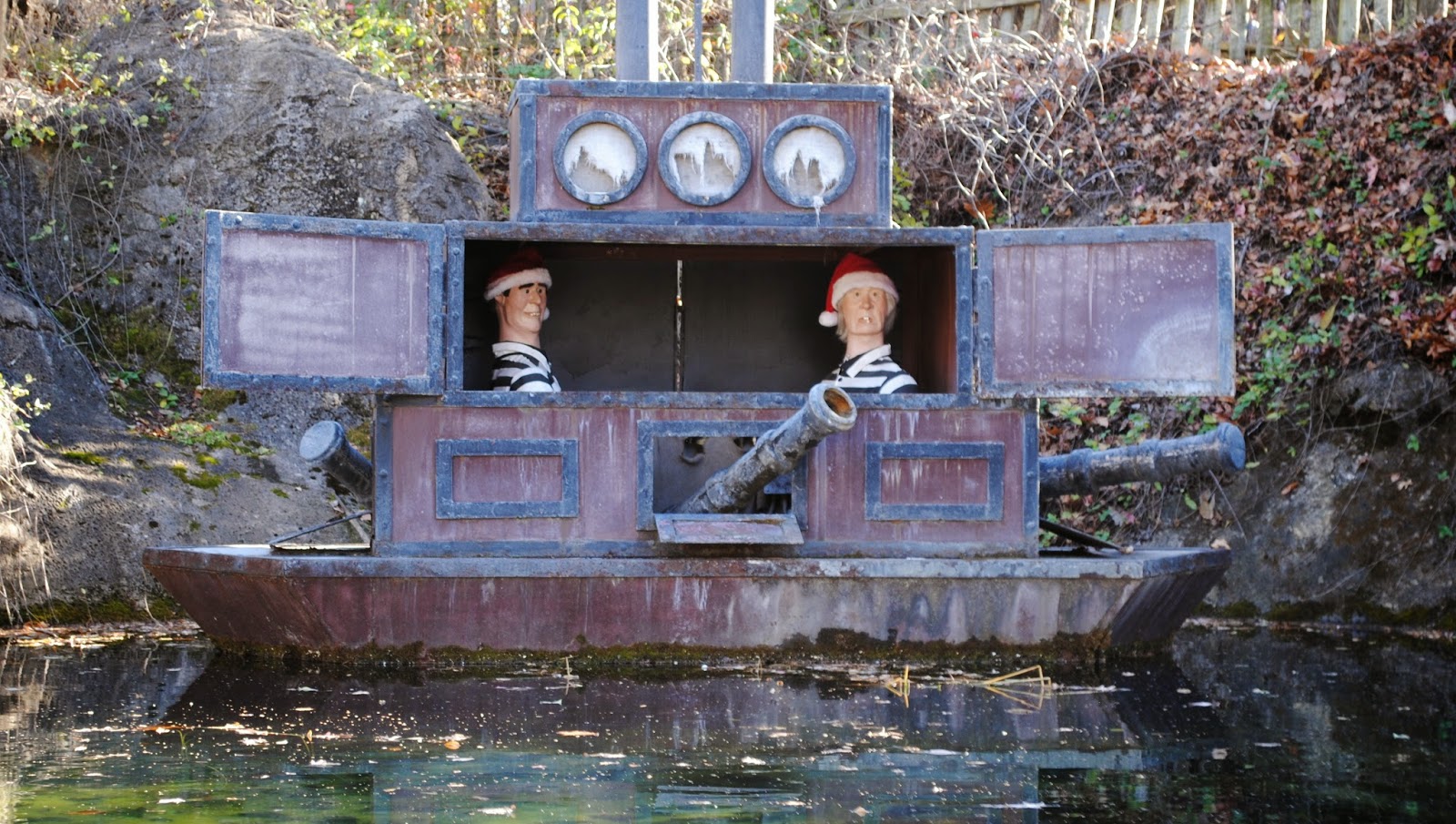 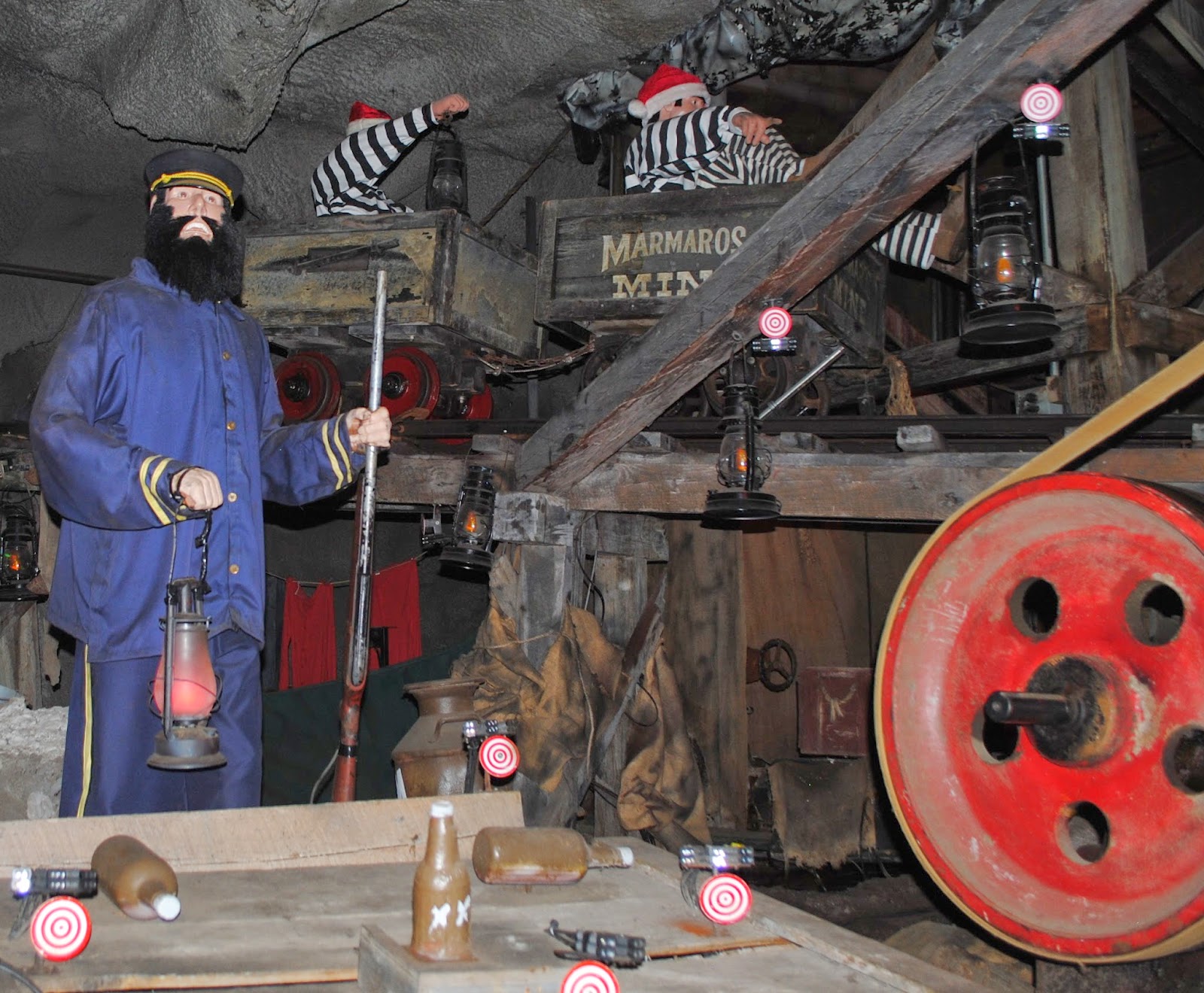 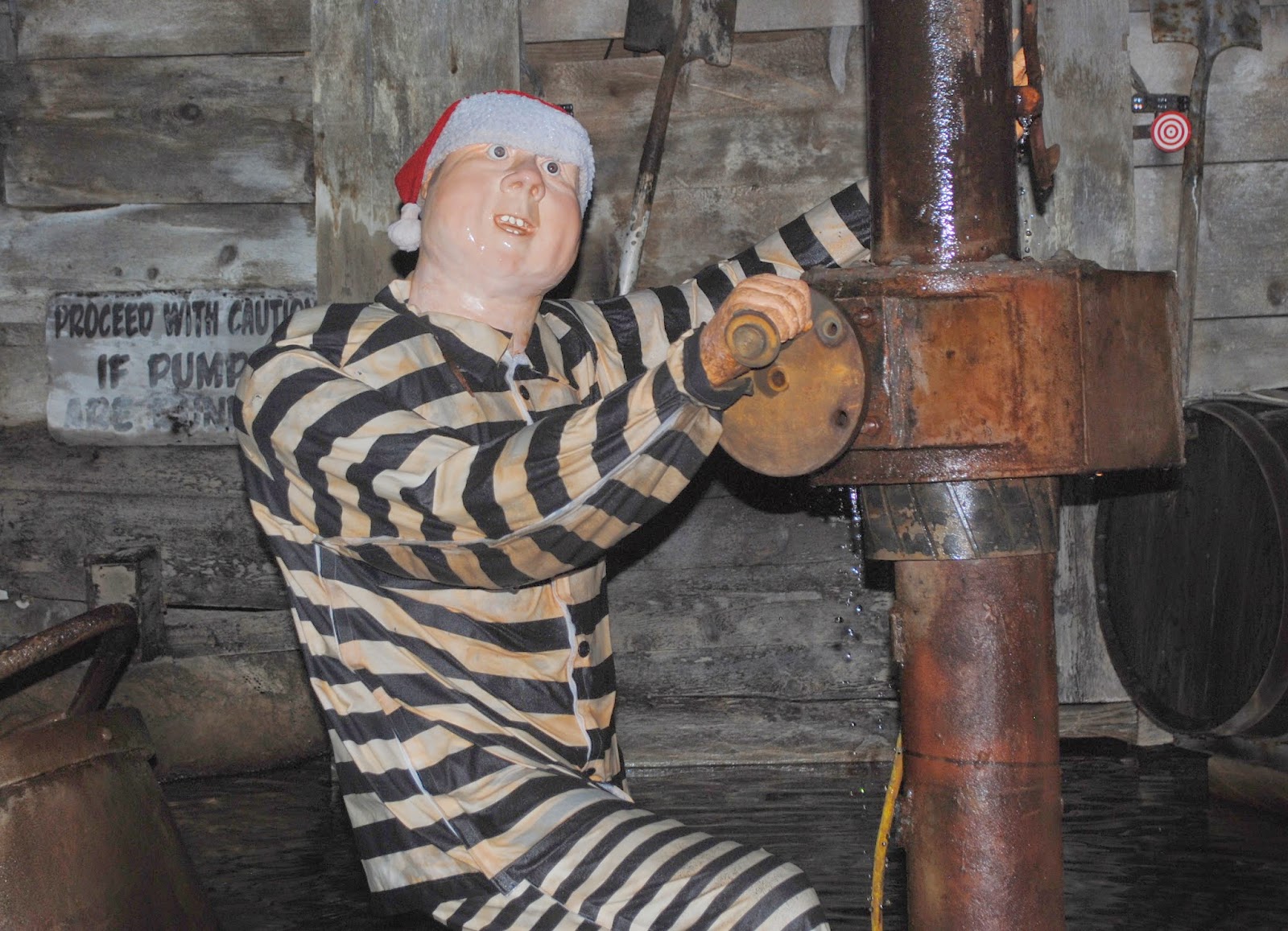 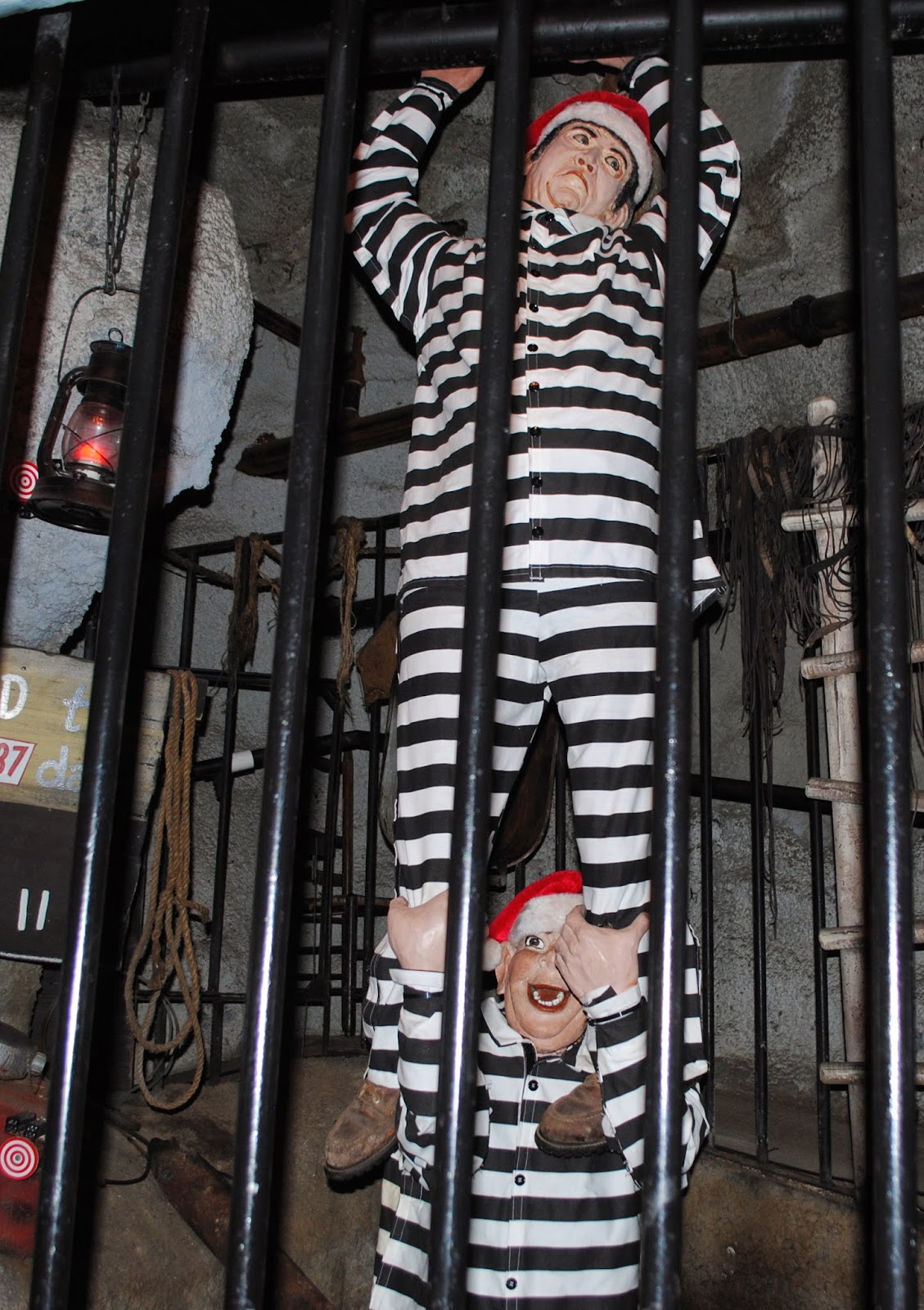 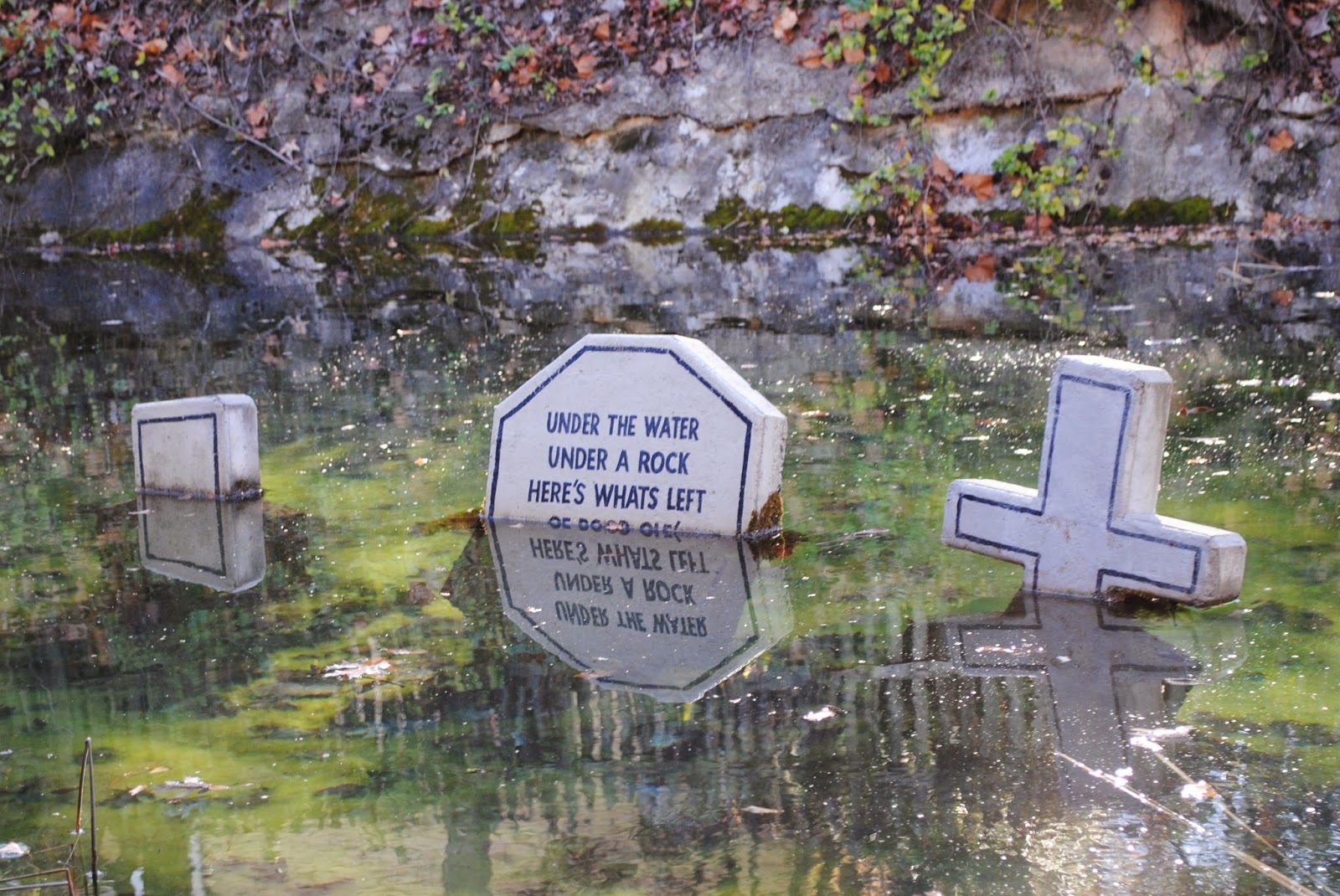 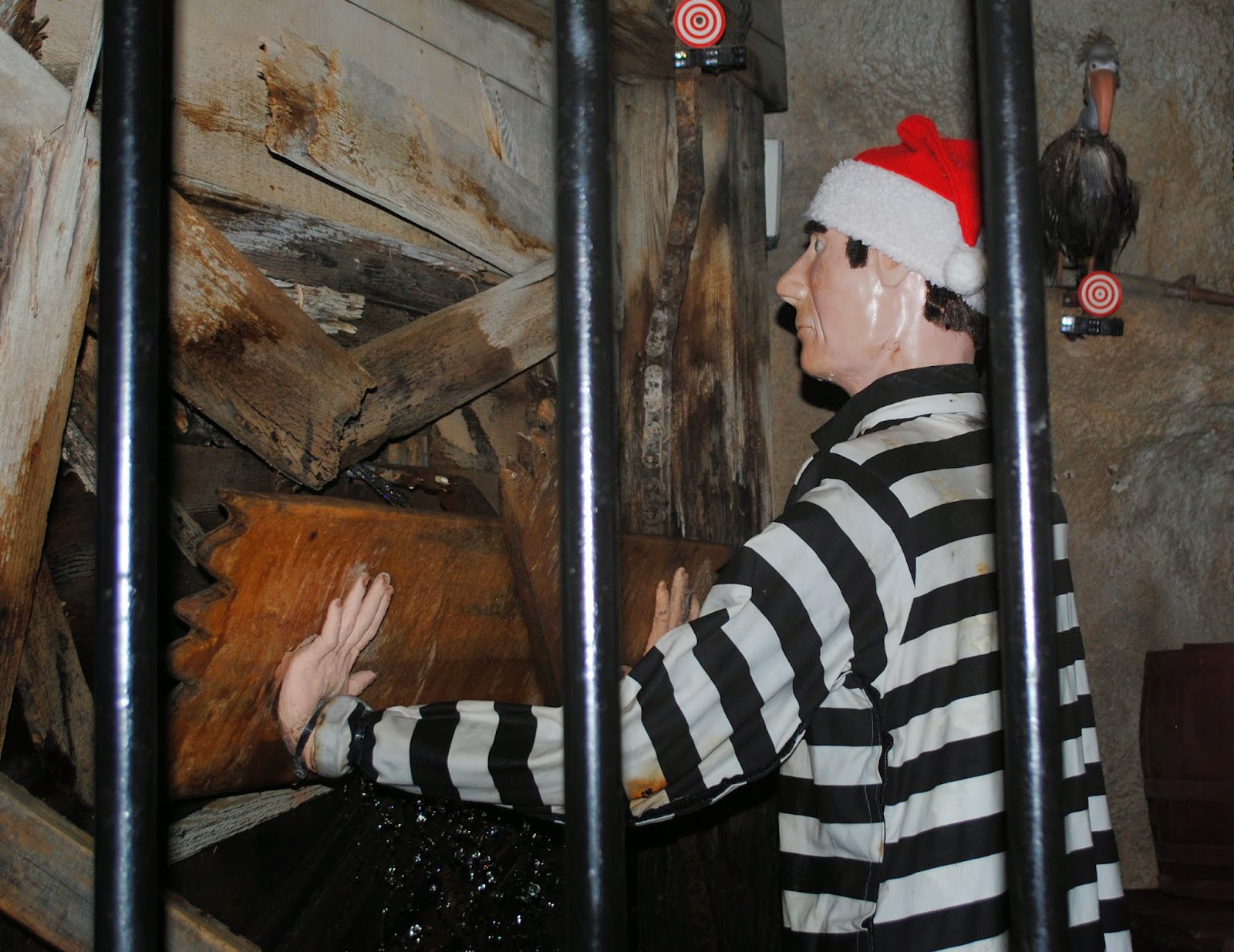 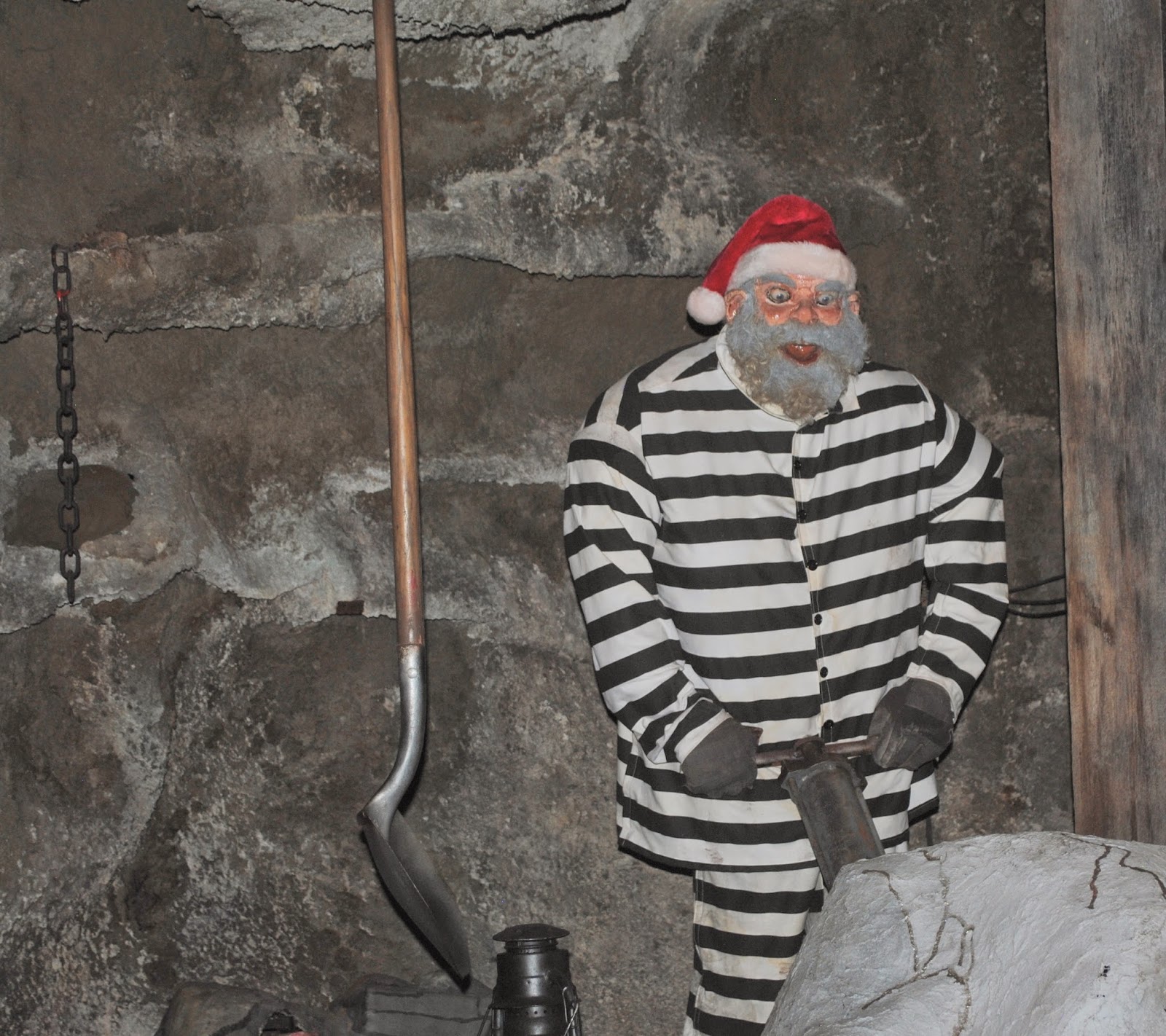 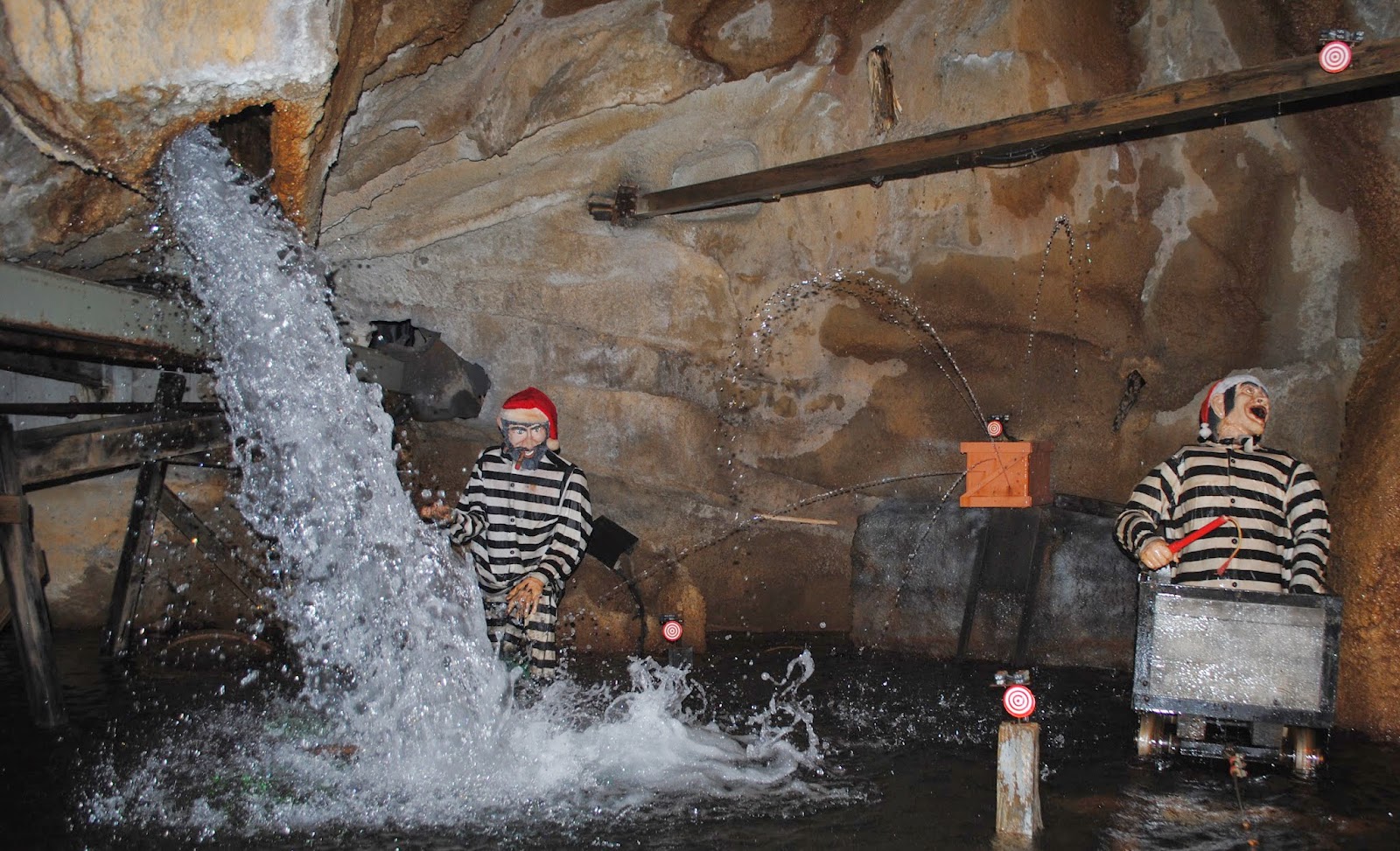 While I went to Silver Dollar City to experience these two old school rides, I was thrilled when I found another old school attraction:  Grandfather's Mansion. 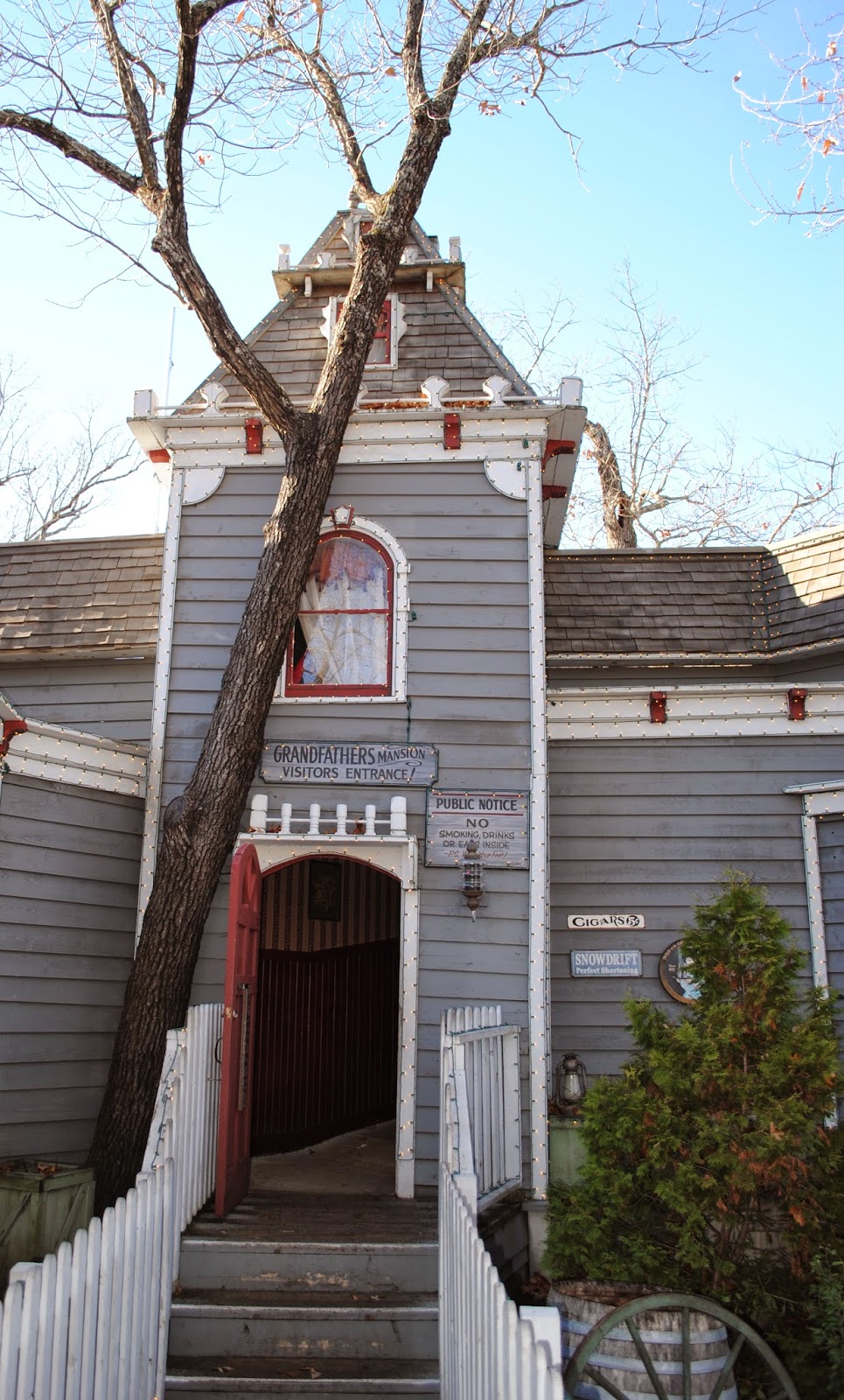 Grandfather's Mansion is what is known as a Mystery House, which I talked about here recently.  Click HERE for my full article on Mystery Houses.  Basically these are attractions where traditional physics and gravity do not apply.  You body becomes slanted.  Pool balls roll up Hill.  There is a bed that it is impossible to sit up in........... 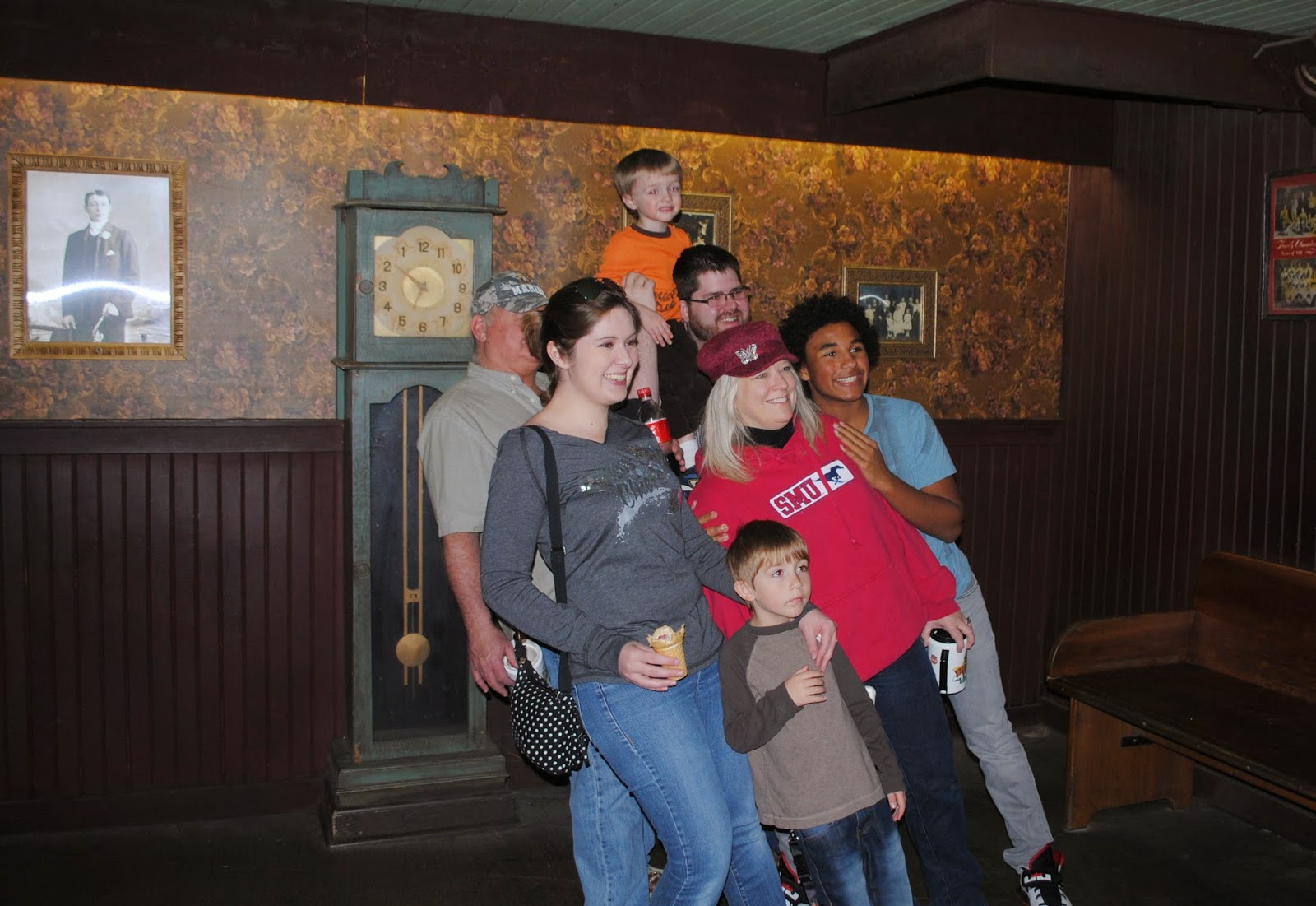 Oddly enough, both this attraction and Blowing Rock's Mystery Hill's storyline revolve around a mysterious grandfather figure.  This grandfather sits on the ceiling of the Mansion rocking back and forth in his rocking chair. 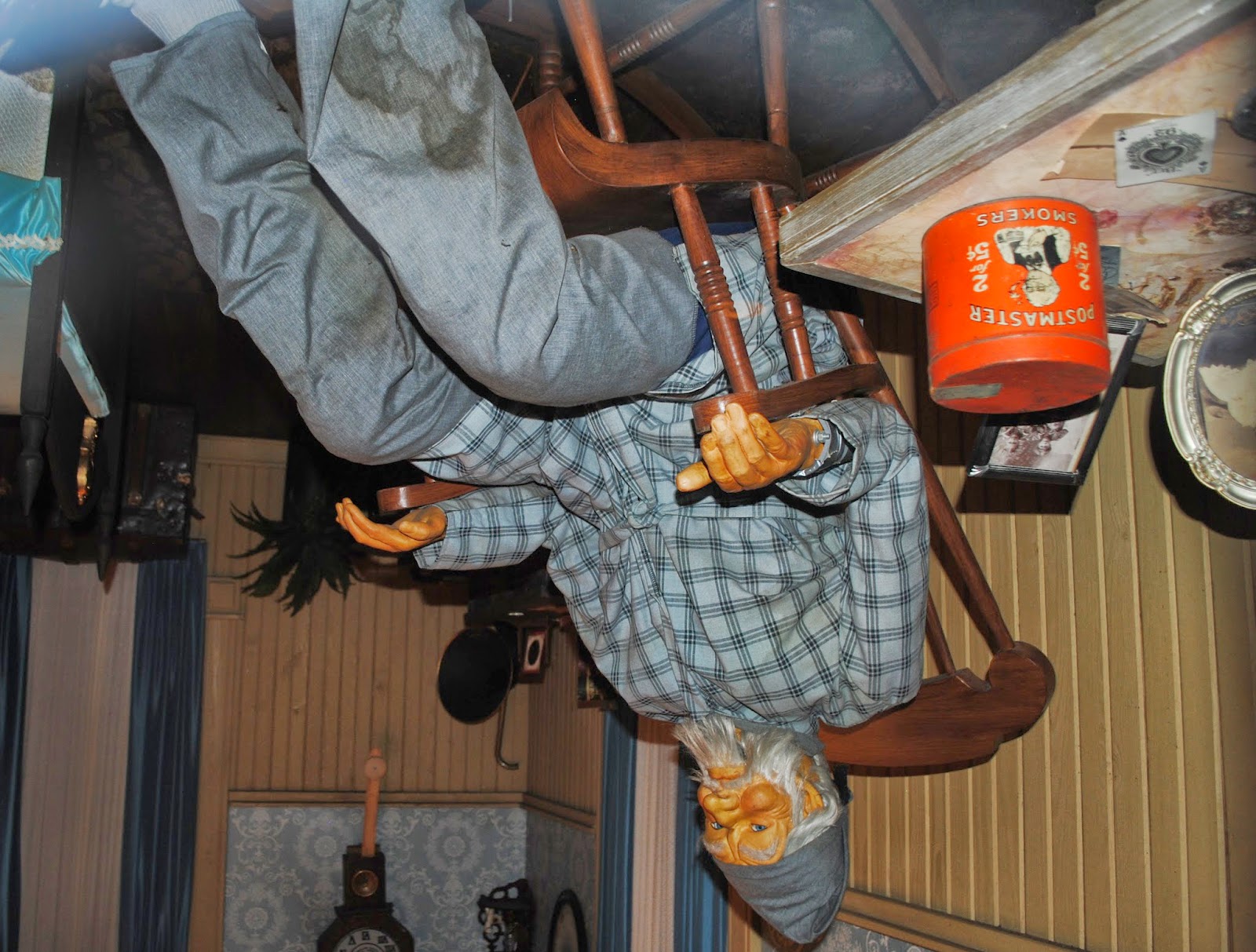 Here's me chilling in the Mansion. 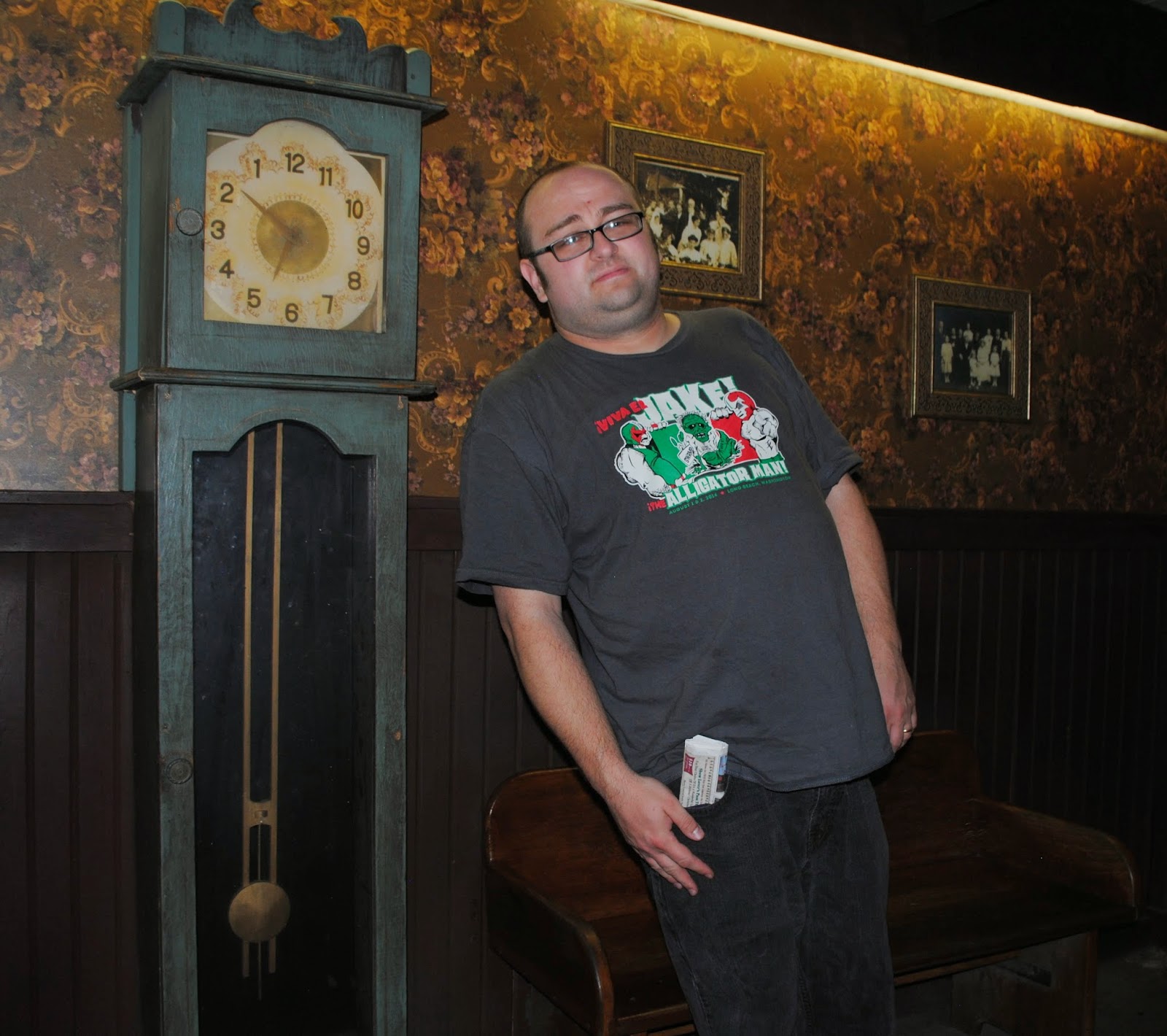 They even have a mirrored hallway to allow you to take slanty selfies.... 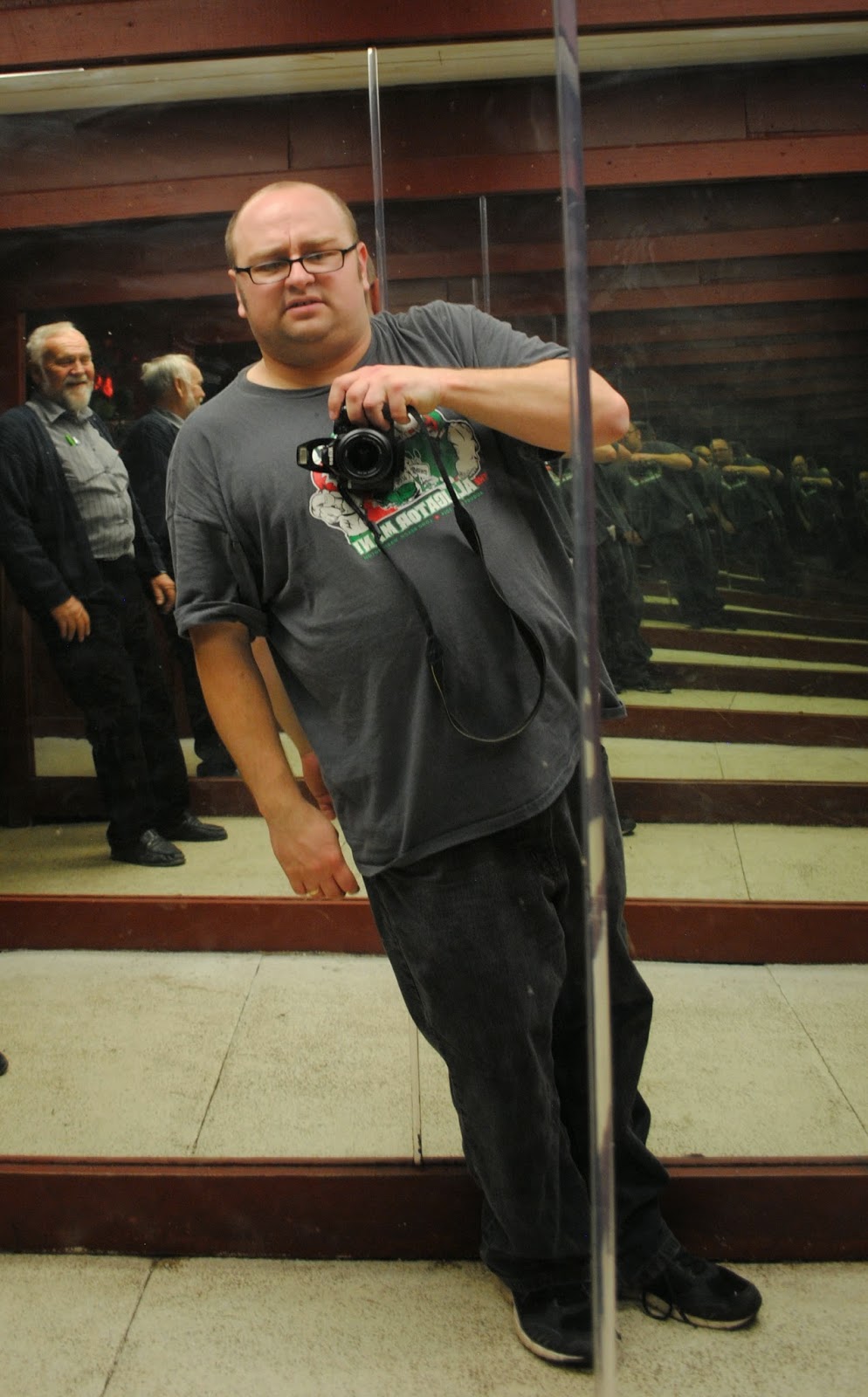 Anyways, much like Dollywood, this is a slick modernized theme park, but there are definitely some gems to be found here.

And I can't forget my Flickr Photostream, where all this got started.
Posted by Jacob at 7:59 PM