I remember it like it was yesterday.  I was a small child.  We were in the upper most floor of the Milwaukee Public Museum.  It always seemed like each upward floor had a darker more sinister tone.  The lighting was dimmer.  It was eerily quiet.   The mannequins were creepier.  Me and my dad came across them: The Shrunken Heads. 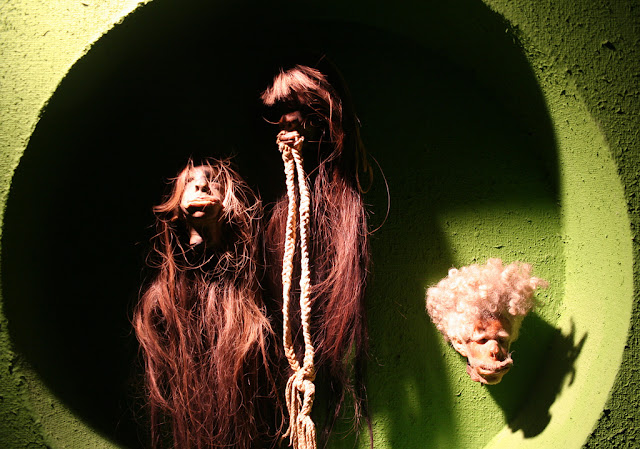 "Are those are real heads?"  I asked.
My father confirmed this to me as I had a sick feeling in my stomach.   A series of twisted questions ran through my head.

How in the hell does someone shrink a head?

Why in the hell would someone shrink a head??

Why would the museum put murder victims heads on display???

I did not like those heads.  What is more sinister then killing someone and the making their head really tiny for no reason?

This would not be my last encounter with shrunken heads, not by a long shot.   As I grew up and developed a taste for the strange and unusual I would continually run into more examples of these gruesome things.  As I slowly gained an appreciation for the things the scared me as a child: Taxidermy, mannequins and clowns, I never really embraced the shrunken head.  To this day they give me the creeping willies.

So WHY would someone shrink a head?  The Shrunken head, or Tzantza as it is also know, comes from a religious tradition in Ecuador.  It was believed that by cutting off the head of your enemy and shrinking it you could trap their soul and use it to have power over their tribe and family.  The heads were shrunken by removing the skull (because you can't shrink a skull) and filling the skin with hot sand which would make is shrivel up like old leather.

A pretty gruesome practice, but things would get even worse when white people got involved.  As white explorers came across Ecuadorian natives they were fascinated by the shrunken heads.  The natives were more them happy to sell them their extra heads, because they believed that the magic powers only lasted a limited amount of time.

This created a dangerous fad as shrunken heads became the "must have" souvenir of old timey explorers.  Anyone who was any sort of explorer or collector had to have their own shrunken head.

This would create a ghoulish black market as the native would actually start killing more people to get more heads to sell to white explorers.  Ecuadorian morgues were robbed of their human heads, so they could be shrunken and sold.  The native would even make counterfeit heads from shaved monkeys to try to quench white people's insatiable thirst for shrunken heads.

One of these explorers with a lust for Shrunken heads was Robert Ripley, of Ripley's Believe it or Not.  In his museums or odditoriums spread across the globe, most contain a least one Shrunken head. 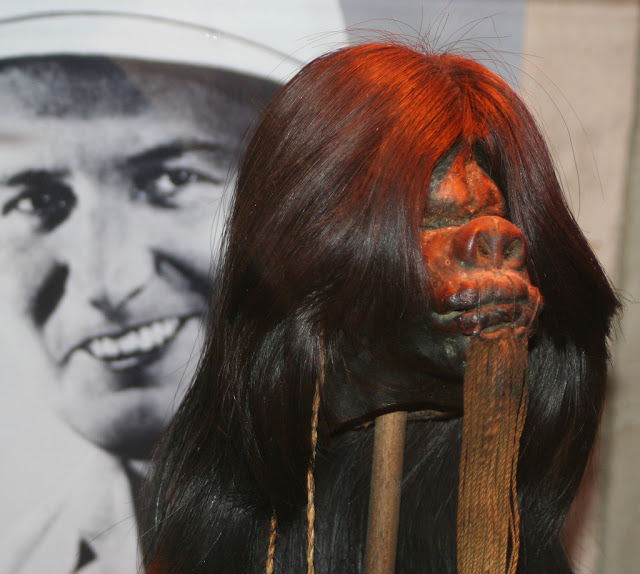 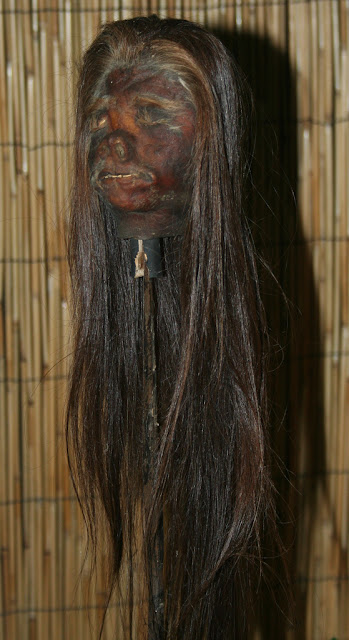 And in Myrtle Beach, SC respectfully displayed in the clutches of a mannequin. 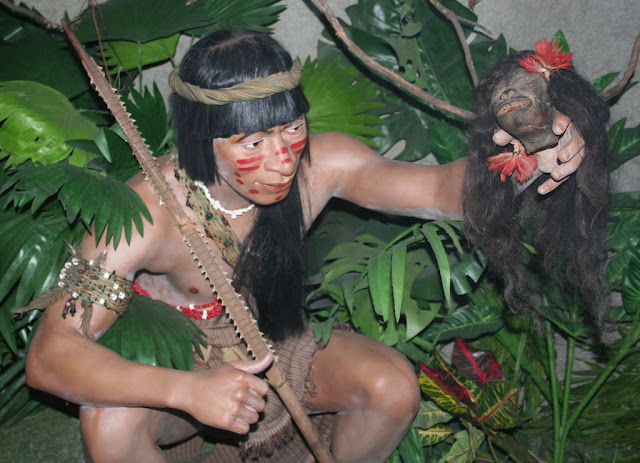 In Key West's Ripley's Believe it or Not Museum is perhaps the most ghoulish of all the Shrunken heads I have a seen.......A hideous Shrunken Torso that once belonged to Ernest Hemingway..... 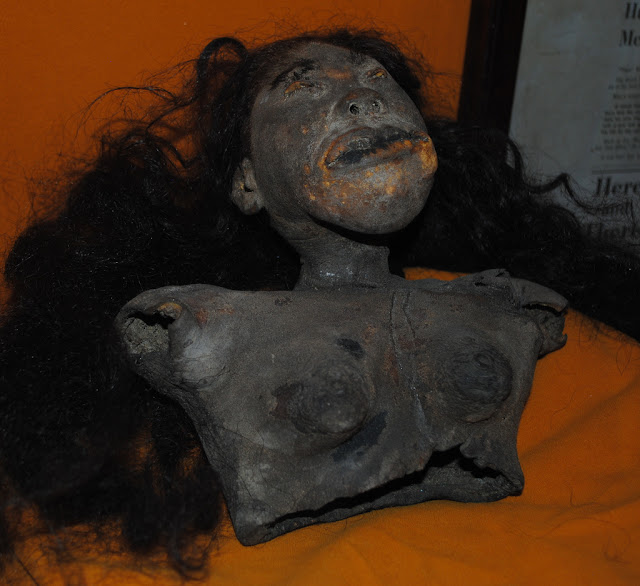 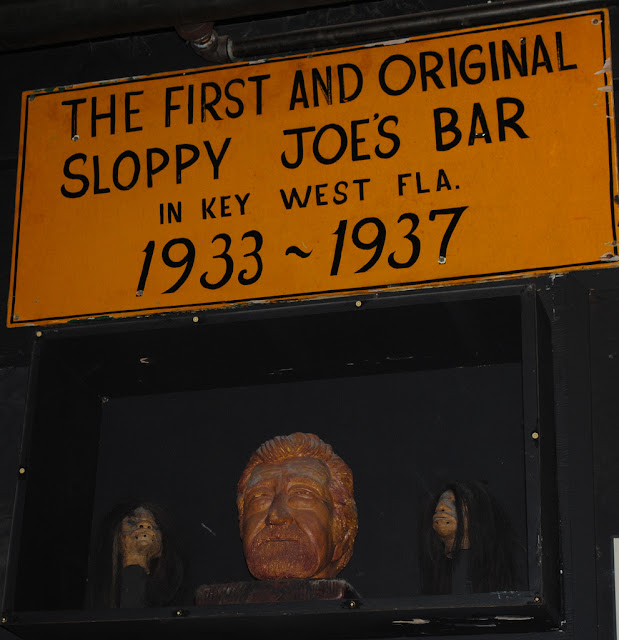 While it seems that there is indeed an over abundance of shrunken heads in the state of Florida, I would suggest the New York City is the place to go if you can't get enough of Shrunken Heads.

The American Museum of National History (the one in the first Night at the Museum Movie), has a big cluster of Shrunken Heads. 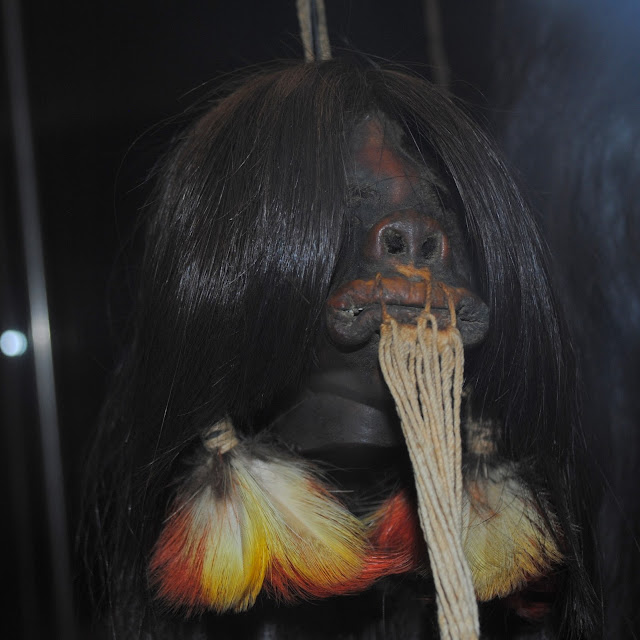 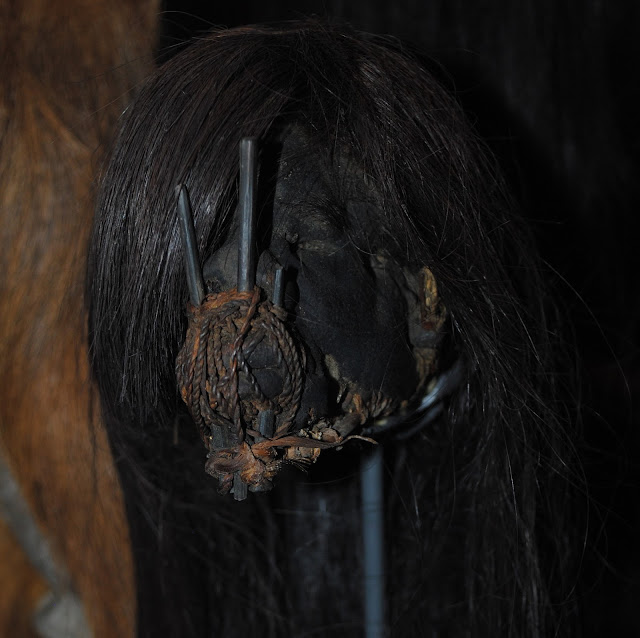 The collection even includes the shrunken head of a Sloth.... 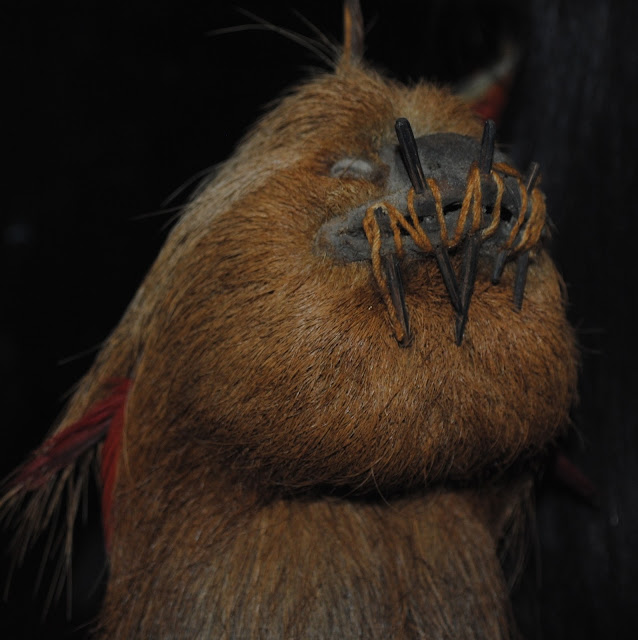 But the largest concentration of Shrunken heads imaginable belongs to Ripley's, of course.  The Time Square Ripley's Odditorium has a room dedicated solely to Shrunken heads.  When you step into the room tribal drumming music starts to blare as the heads start rotating in their cases.  It is a bizarre and ghoulish display.   Just look at all of them......... 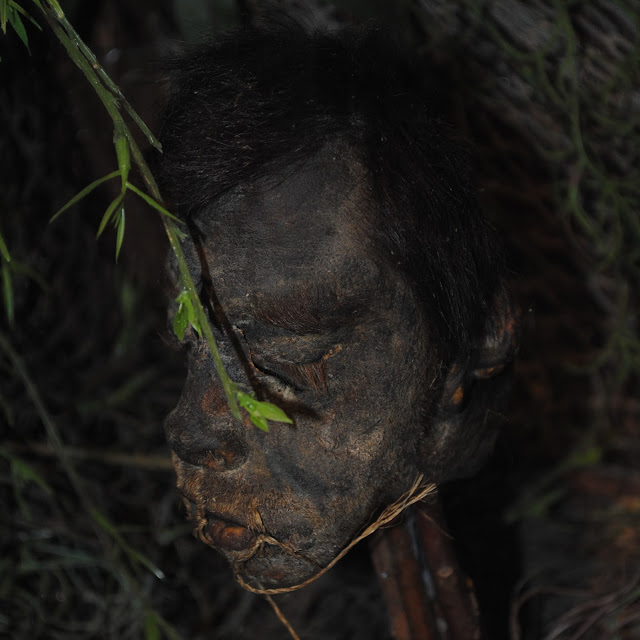 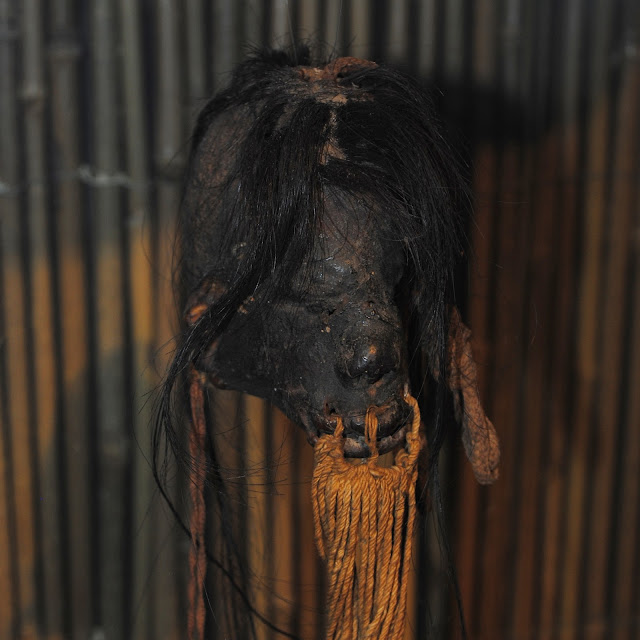 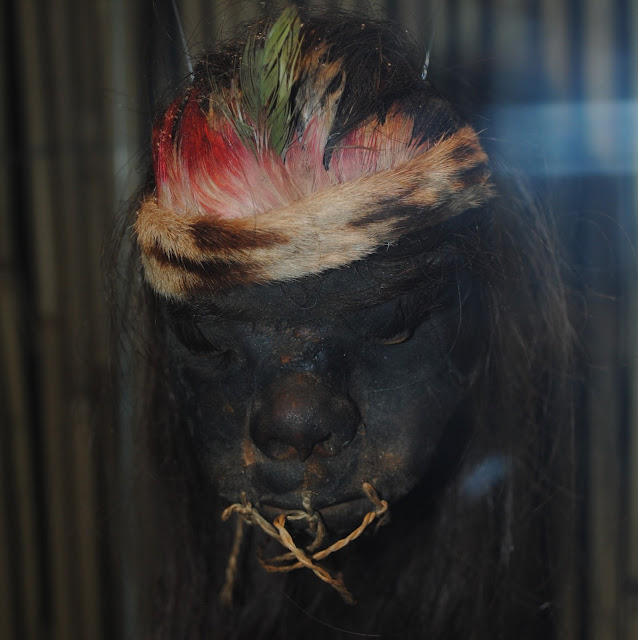 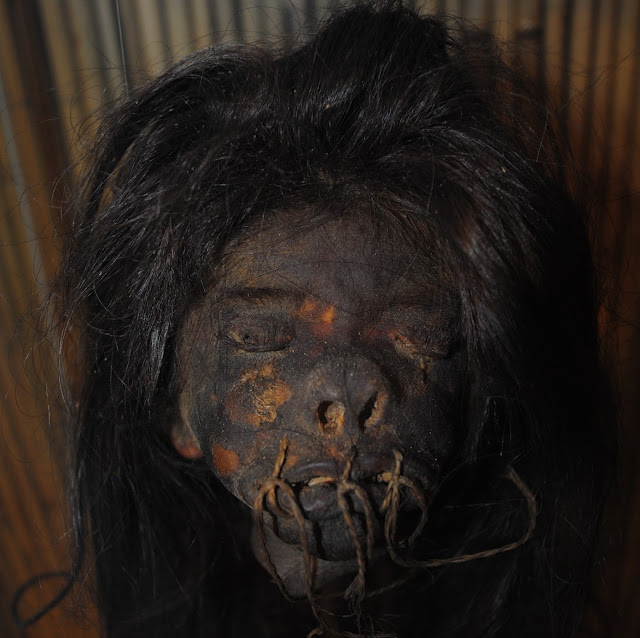 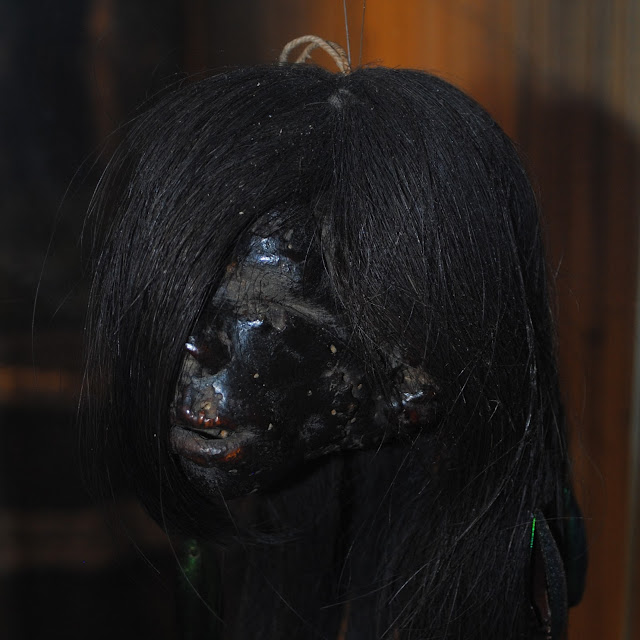 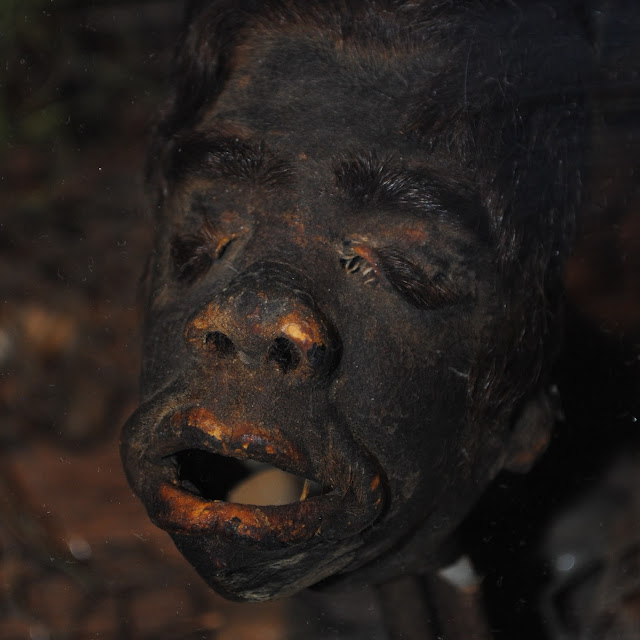 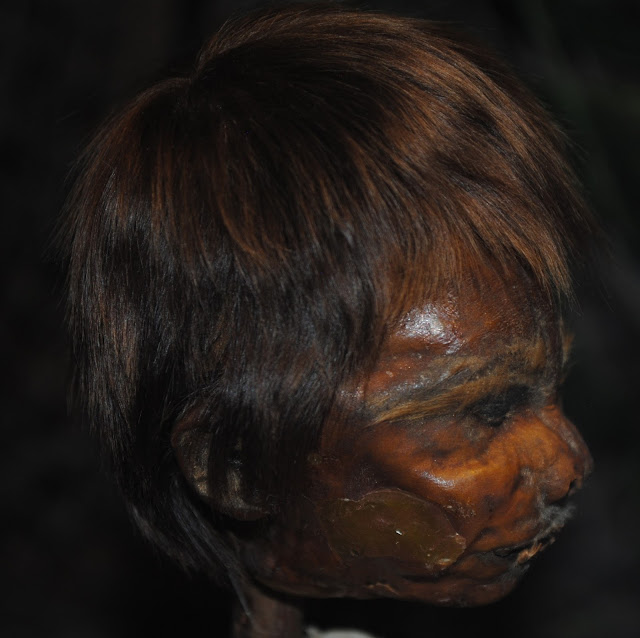 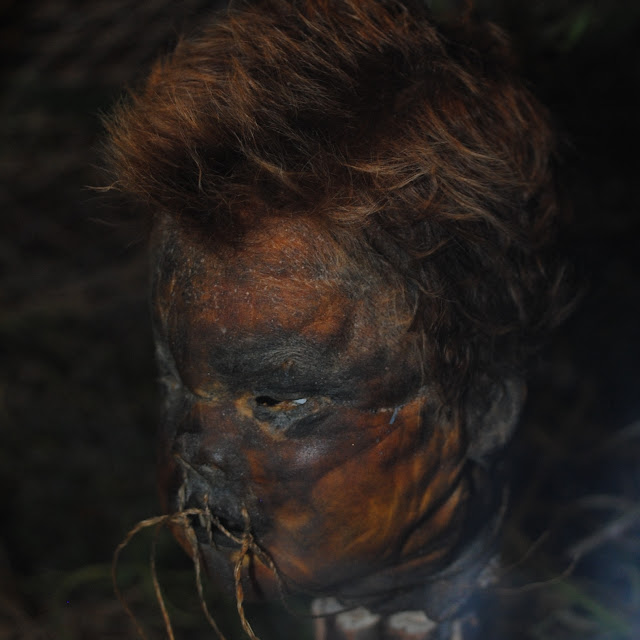 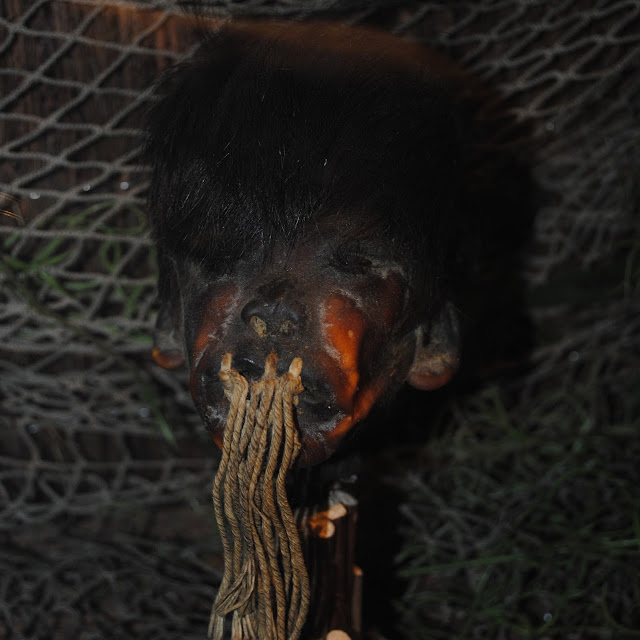 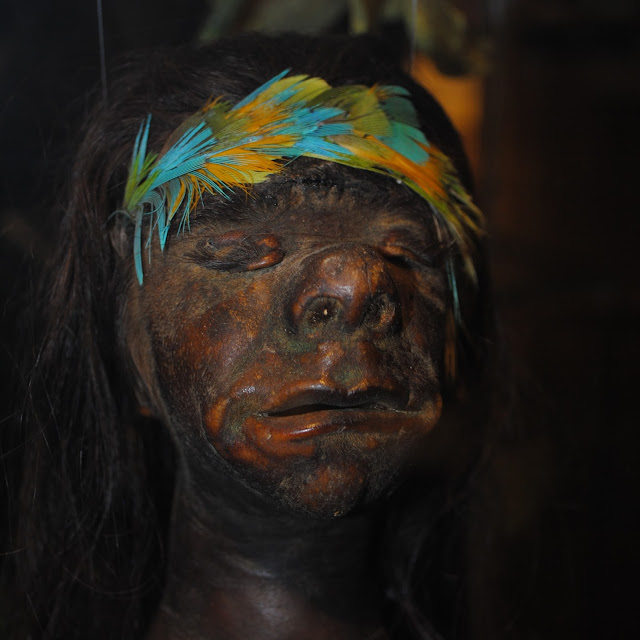 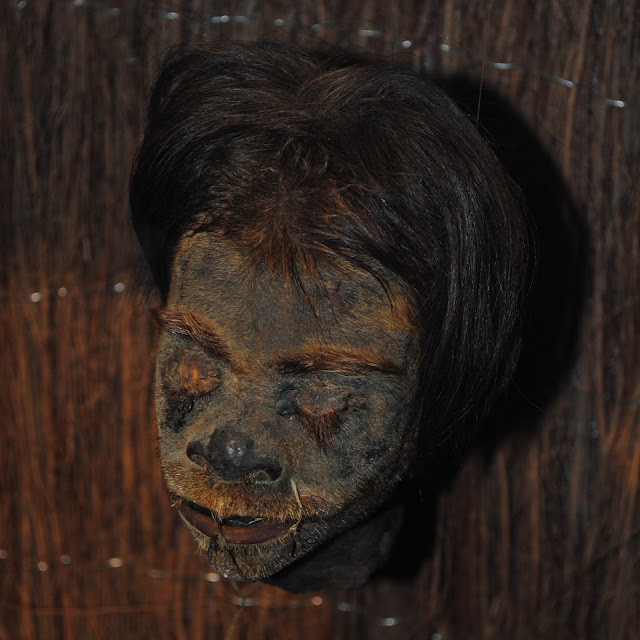 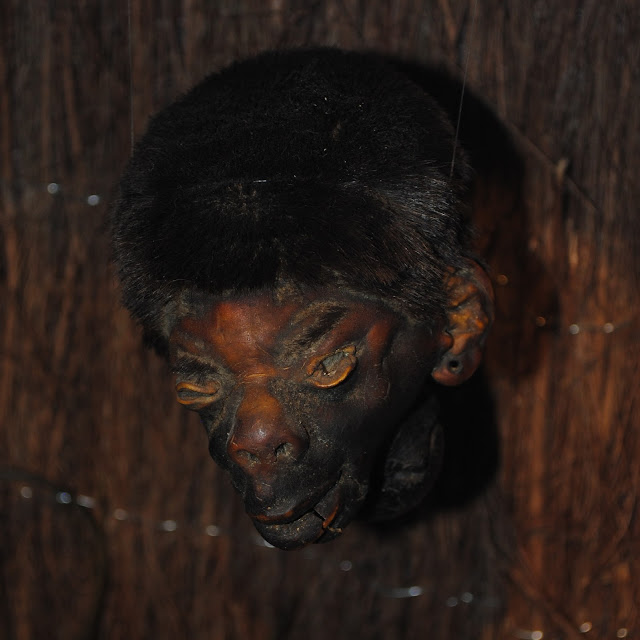 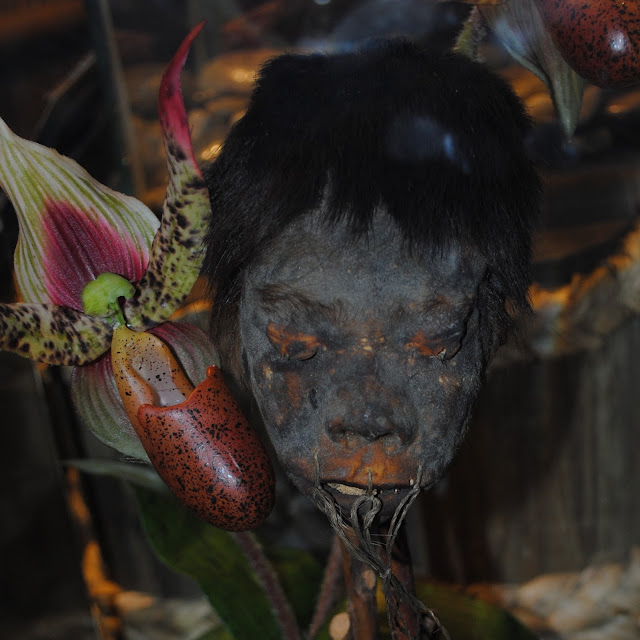 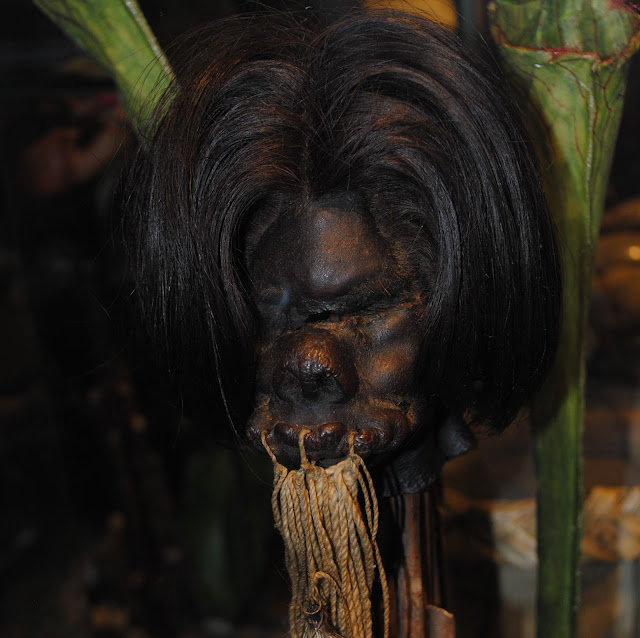 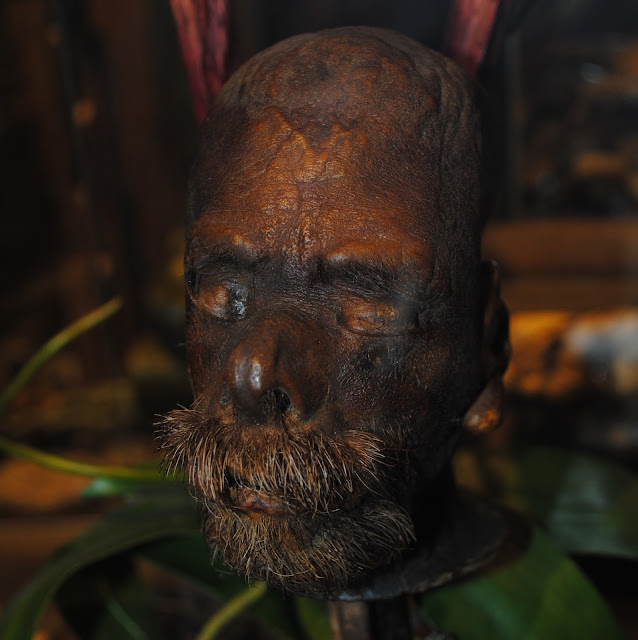 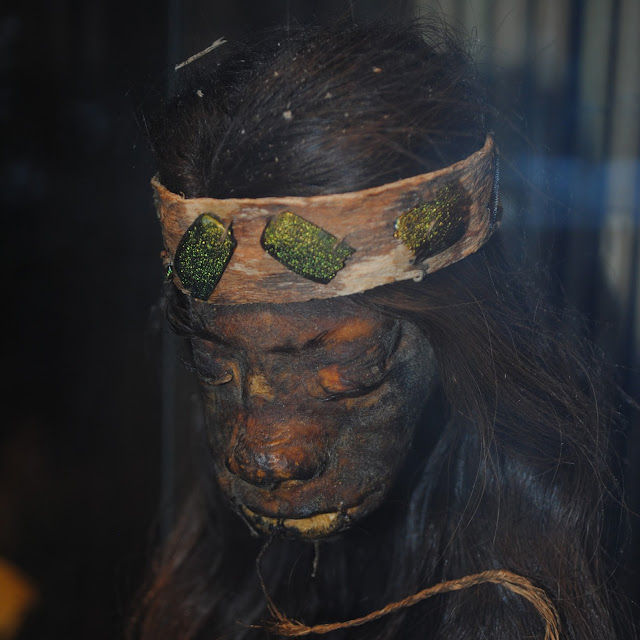 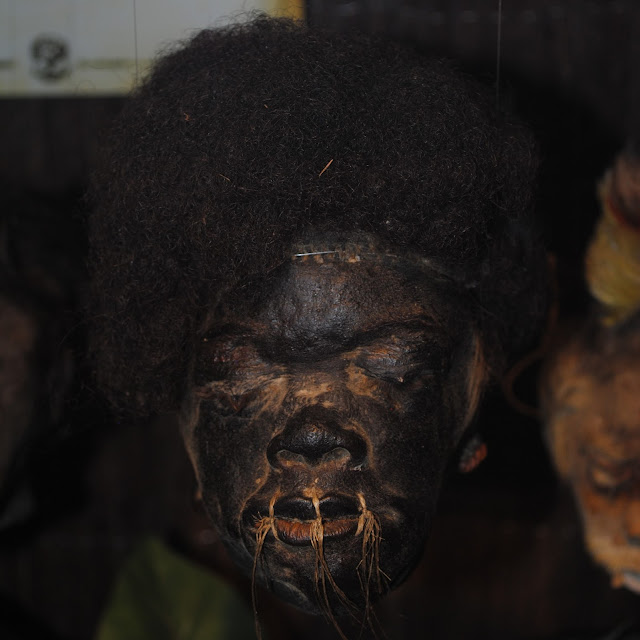 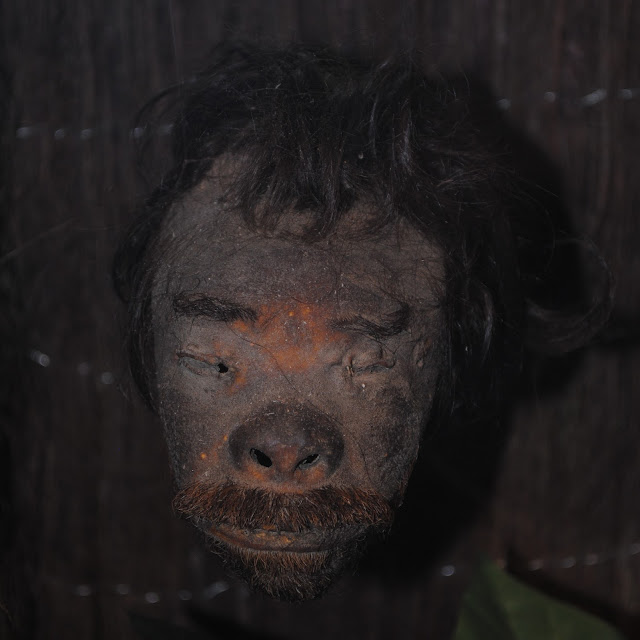 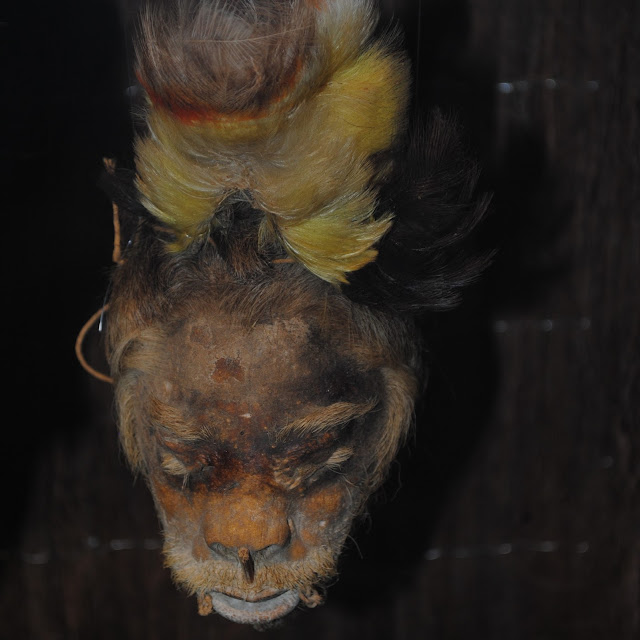 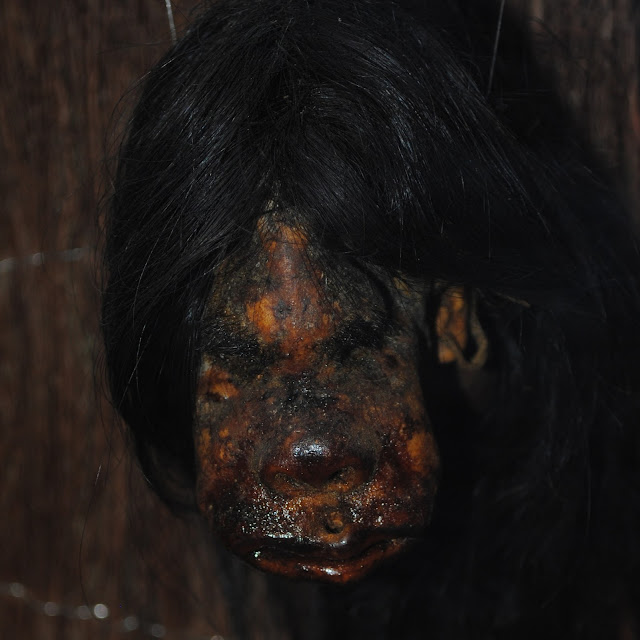 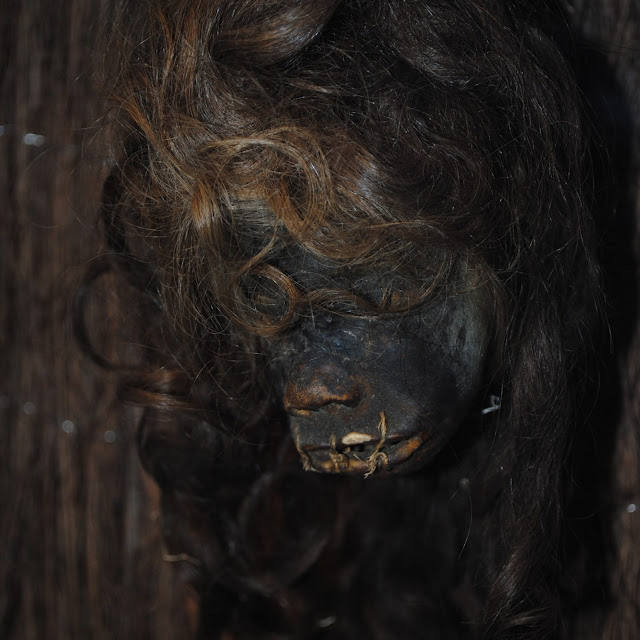 And I can't forget my Flickr Photostream, where all this got started.
Posted by Jacob at 10:06 PM