I would like to proudly induct "The Tremors" into the musical wing of the Hillbilly Hall of Fame.  The Tremors are a Rockabilly band out of North Carolina. 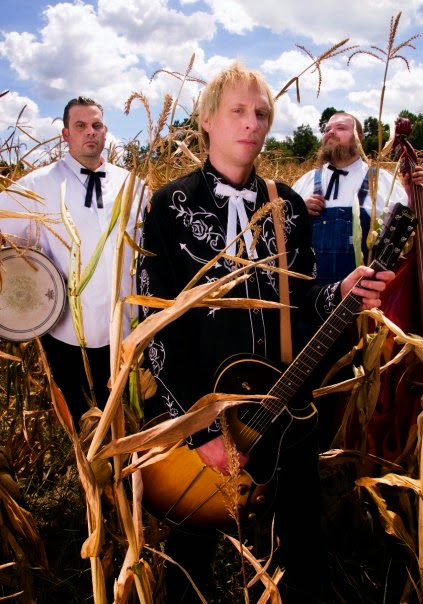 They embody the Hillbilly spirit, which can be found on their new album "Old-Fashioned Hillbilly Feud".  Its a great album, especially the title track 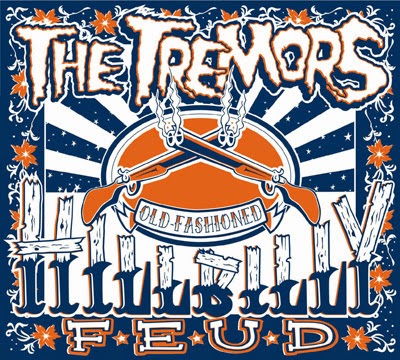 And check out the image inside the CD cover.

If you doubt their Hillbilly cred, just check out their back story.....

Listen, if you dare, to a story so bizarre that it has been known to make women faint and grown men shriek in terror! Out of a time-rotted tomb crawls an unspeakable horror, The Tremors, the Scourge of the South...
The dark and twisted tale of the tremors begins in 1957, when AWOL marine and cough syrup addict, Stretch Armstrong (drums), met escaped mental patient, Jimmy Tremor (guitar, vocals) and former alligator wrestler, Slim Perkins (bass), at "The Happy Gizzard" a tar-paper shack that served as the local honky-tonk for the citizens of Sibly, NC. The trio was often seen blasting out the new Sun records of Elvis Presley, Jerry Lee Lewis and Carl Perkins on the club's jukebox.

By 1958, the boys had their own band and toured extensively on the "Chitlin' Circuit" of the deep south. Then came the fateful night in Birmingham, AL when the band was paid entirely in booze, resulting in the alcohol poisoning deaths of all three members. When the bodies were shipped back to Sibly, the townspeople refused to let the Tremors be buried in the sacred ground of the church cemetery. As the stand-off between the next of kin and the towns-people ensued, the corpses began to mummify (probably due to their over-zealous consumption of "Pappy's corn juice" as Jimmy puts it) and the Tremors were soon back in show business touring with "Col. Bolt Upright's Cavalcade of Freaks and Oddities" out of Shreveport, LA. "The Zombie Hillbilly Band", as they were billed, was a strong draw (better than they ever did when they were alive) until the 1970's, when freak shows went out of public favor.

In 1981, the band was "abducted" (for a sum of $50) from Col. Upright by extraterrestrials, from the planet Zorcon, who had recently received broadcast transmission of new singing sensation, Elvis Presley, and had set out across the universe to bring back a rock'n'roll specimen. Telepathically sensing the vibrations of the "big beat" from Stretch's left hand, the aliens re-animated the boys, feeling that the "mummy" angle gave the band a much needed gimmick.
Once again the Dixie-fried deviants were drawing crowds at their new home in the Zorconian Museum of Natural History. The Tremors were number one on the inter-planetary charts and there was even talk of a feature film. They had the galaxy in the palms of their hands and then disaster struck. Broadcast transmissions of the Beatles on the "Ed Sullivan Show" reached Zorcon and the Tremors were returned to earth and exchanged for a band with a more "mop-top" appeal.

Now, I didn't do any fact checking, but it seems pretty legitimate to me.  Check out more on the tremors at http://www.tremorsrockabilly.com