A Cold Evening in Santa Claus, IN

Did you ever wonder where all those letters you sent to Santa as a kid ended up?  Much like you expected, they ended up in a frozen arctic wasteland.  However, instead of showing up at the North Pole like you had hoped, they ended up in Indiana.  A fact that is down right depressing if you think about it.

Back in 1859 the town of Santa Fe, IN received a letter from the United States Post Office.  They were informed that there was already a Santa Fe in New Mexico and were asked to pick a new name. I figure that the federal government didn't want them to trick people into seeking out warm weather in Indiana.

The residents of Santa Fe decided to give the Feds a smart ass answer and asked to be called Santa CLAUS.  They name stuck, but would be end up being a blessing and a curse.
Because of the "Santa Claus" name the town ended up getting millions of letters addressed to Santa Clause the person, so much that extra help has to be brought in around the holidays to handle the unholy influx of mail.

Meanwhile, several savvy entrepreneurs tried to take advantage of the town's unique name.  In the 1930s two competing entrepreneurs created two separate Christmas themed attractions.  One was Santa's Castle, which was at one time a roadside attraction featuring Christmas themed miniatures.  The castle still stands, but it is now simply a candy store. 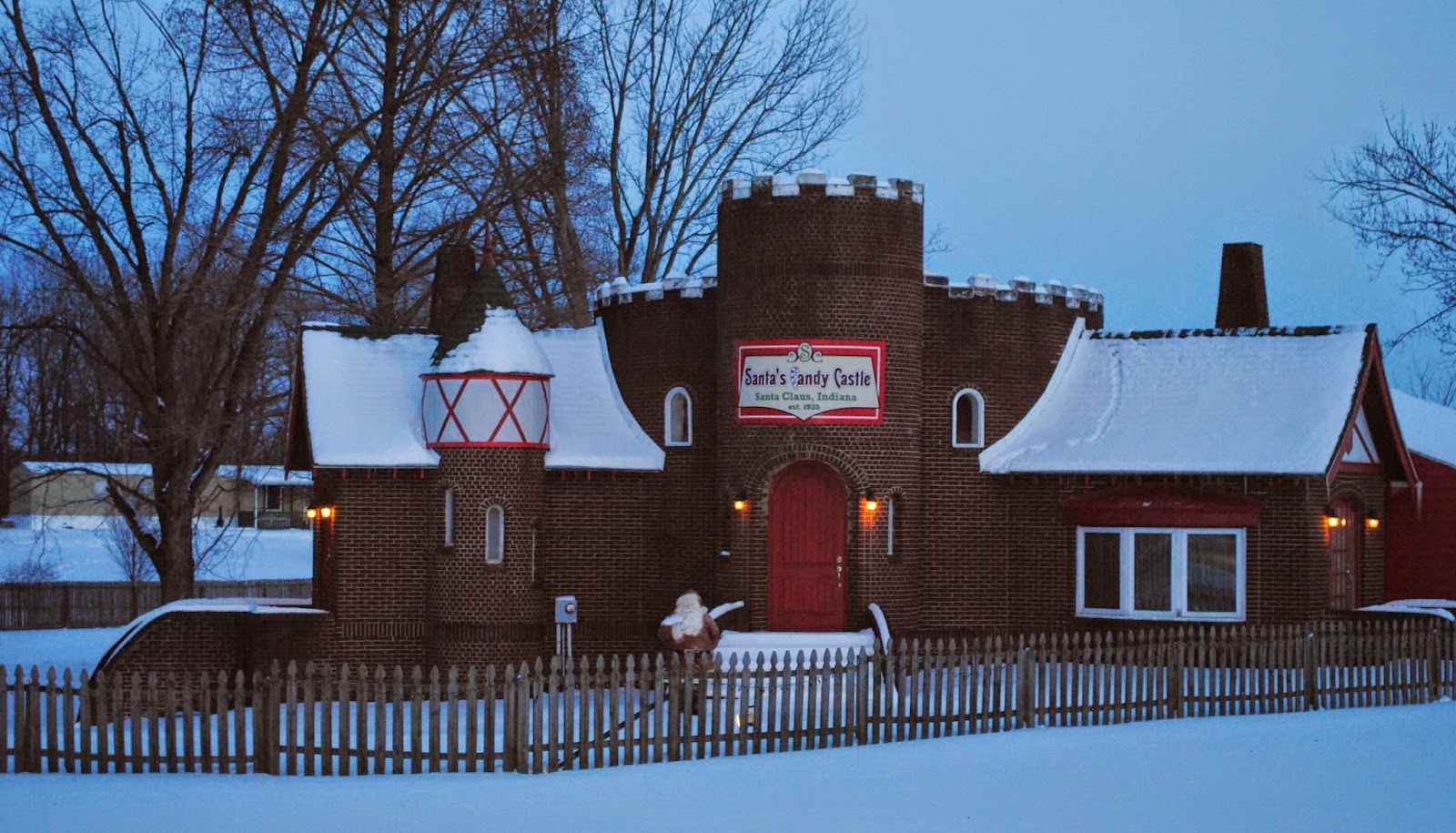 Around the same time "Santa Claus Land", the world's first amusement park was created.  The amusement park is still in operation, but has changed its name to "Holiday World" in the 80s.

I rolled into town on a cold February evening expecting to find a Christmas Paradise.

And that is basically what Santa Clause, IN, a massive towering amusement park in the middle of a million miles of corn fields.  The town itself only has a population of 2,000.

As far as my hopes of a Christmas paradise, I was a little let down.  They did however, have a grouping of fiberglass Santas greeting me. 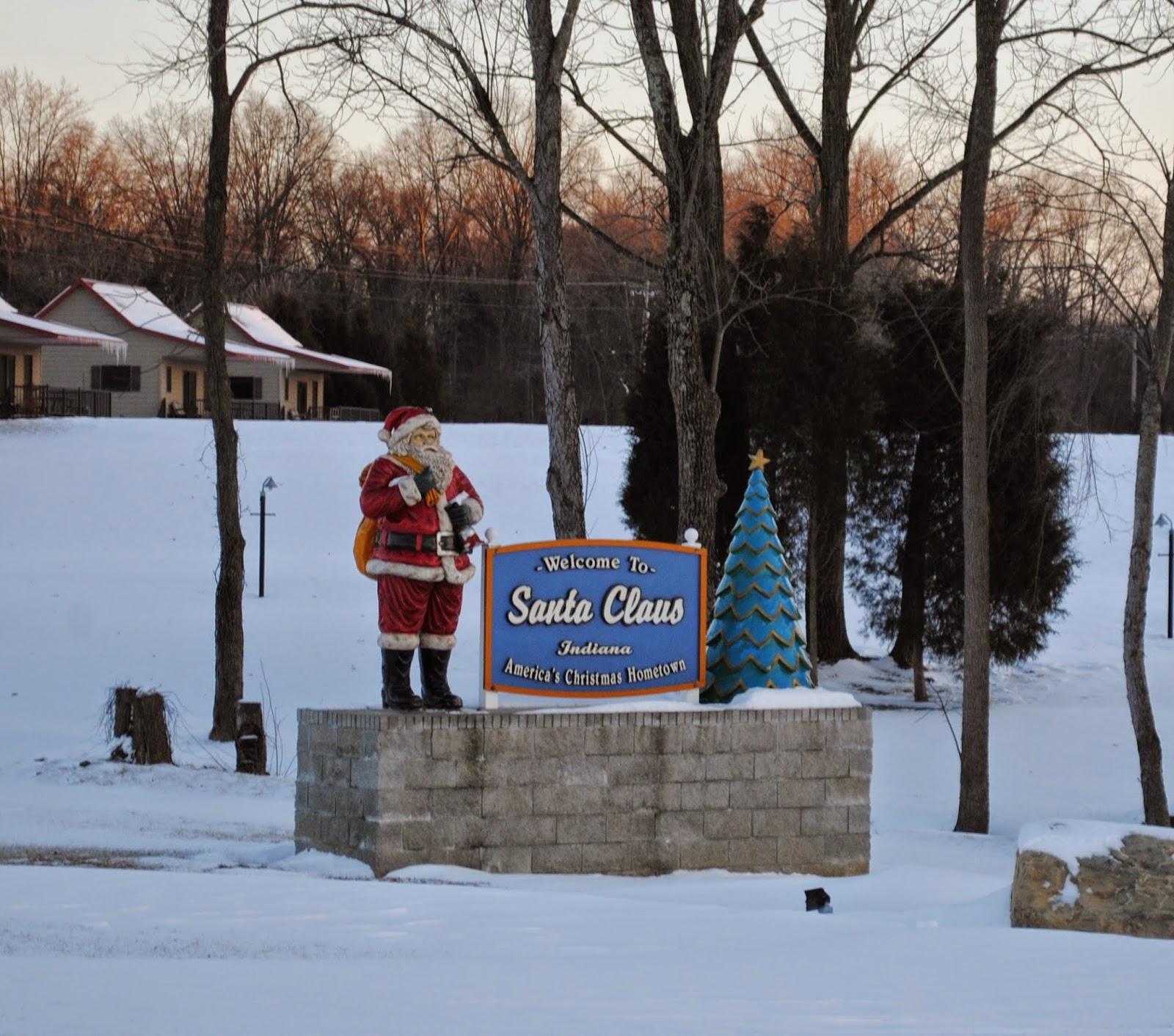 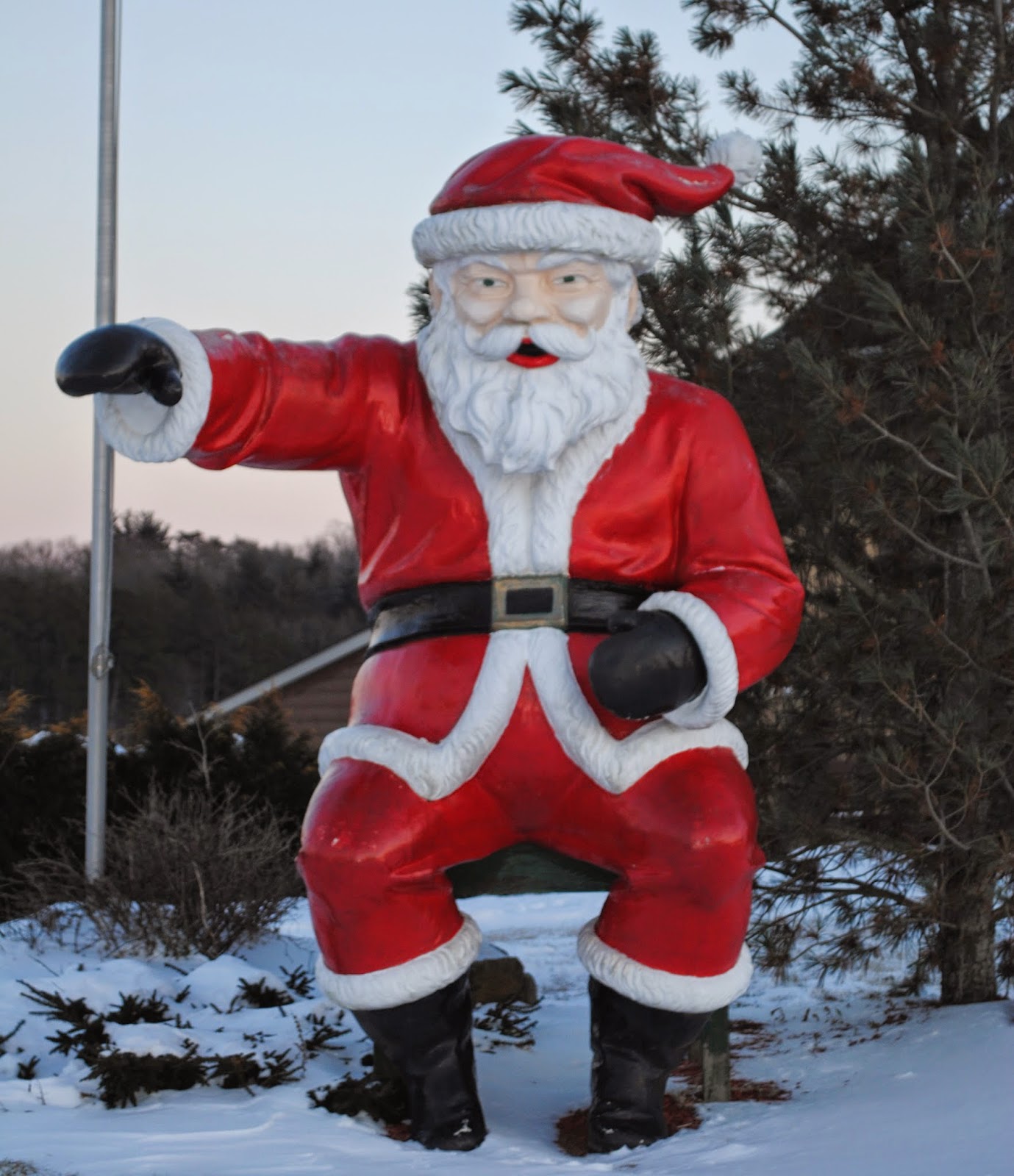 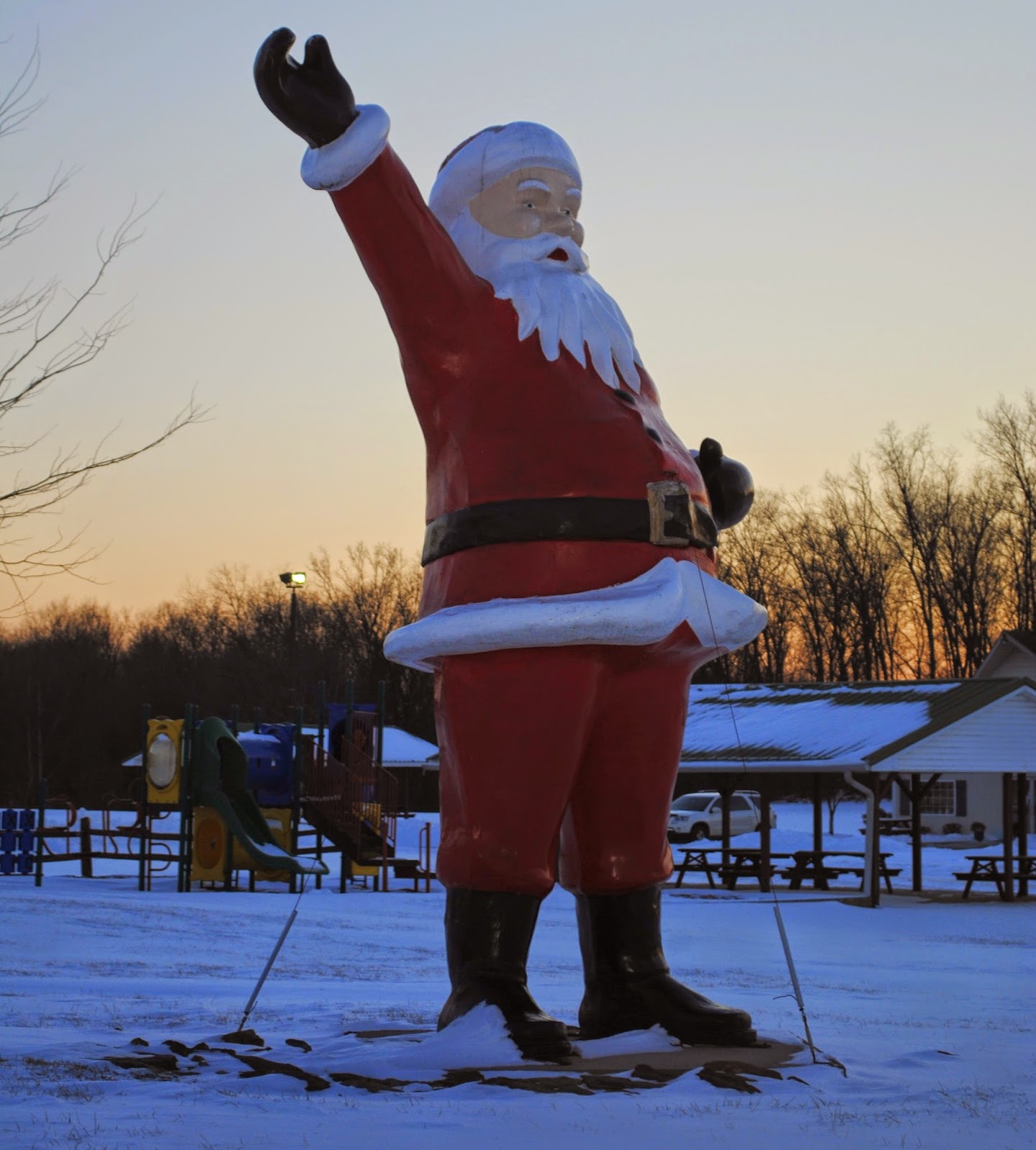 There was a small Christmas motif in the town, including this down right depressing Liquor Store Sign. 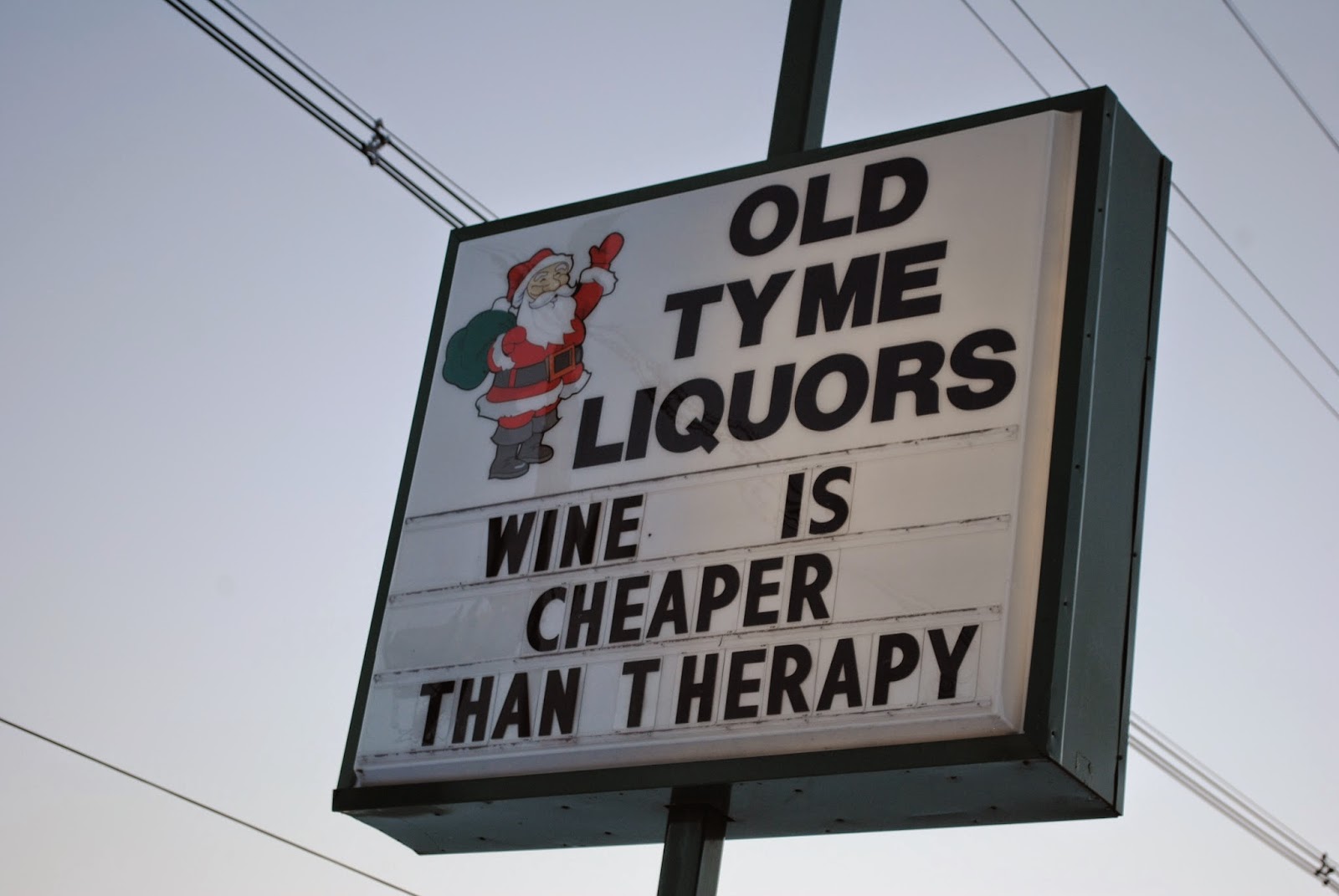 As a Human Service professional I would like to say that wine is not a suitable replacement for therapy.

I found the world's oldest statue of Santa Clause, perched on the highest point in town.  Of course this is Indiana, so its not up that high.  Even though the hill was not that high, I was not willing to walk in thigh high snow in sub zero temperatures to get a decent picture. 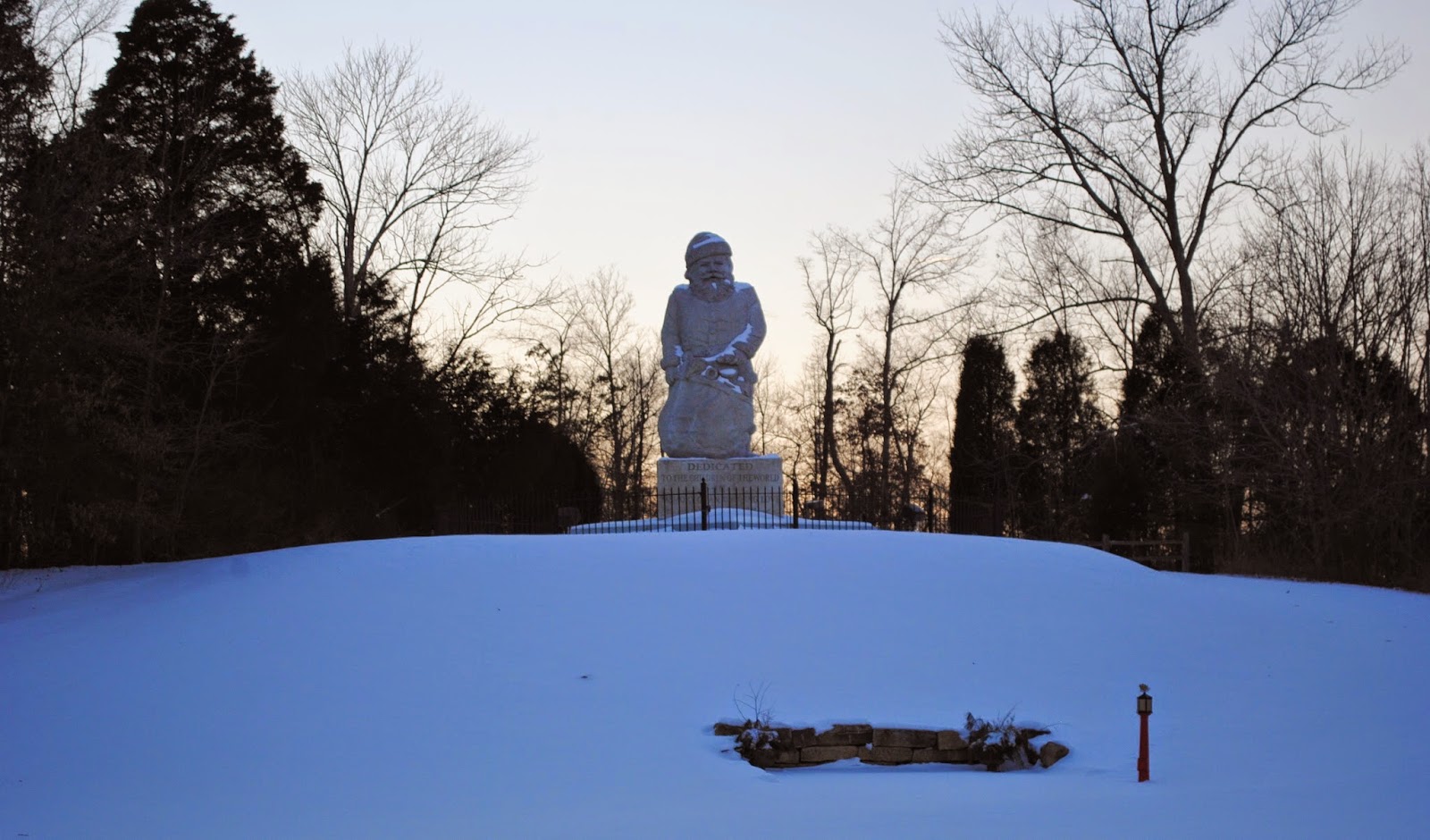 As night fall quickly fell, I desperately criss crossed around town trying to get pictures.  This apparently awoke the suspicions of the Santa Clause Police Department, as they pulled me over and asked why I was driving back and forth across town.  I told them I was just looking around town and the officer sent me on my way as the stars came out in the cold little town of Santa Claus, IN.