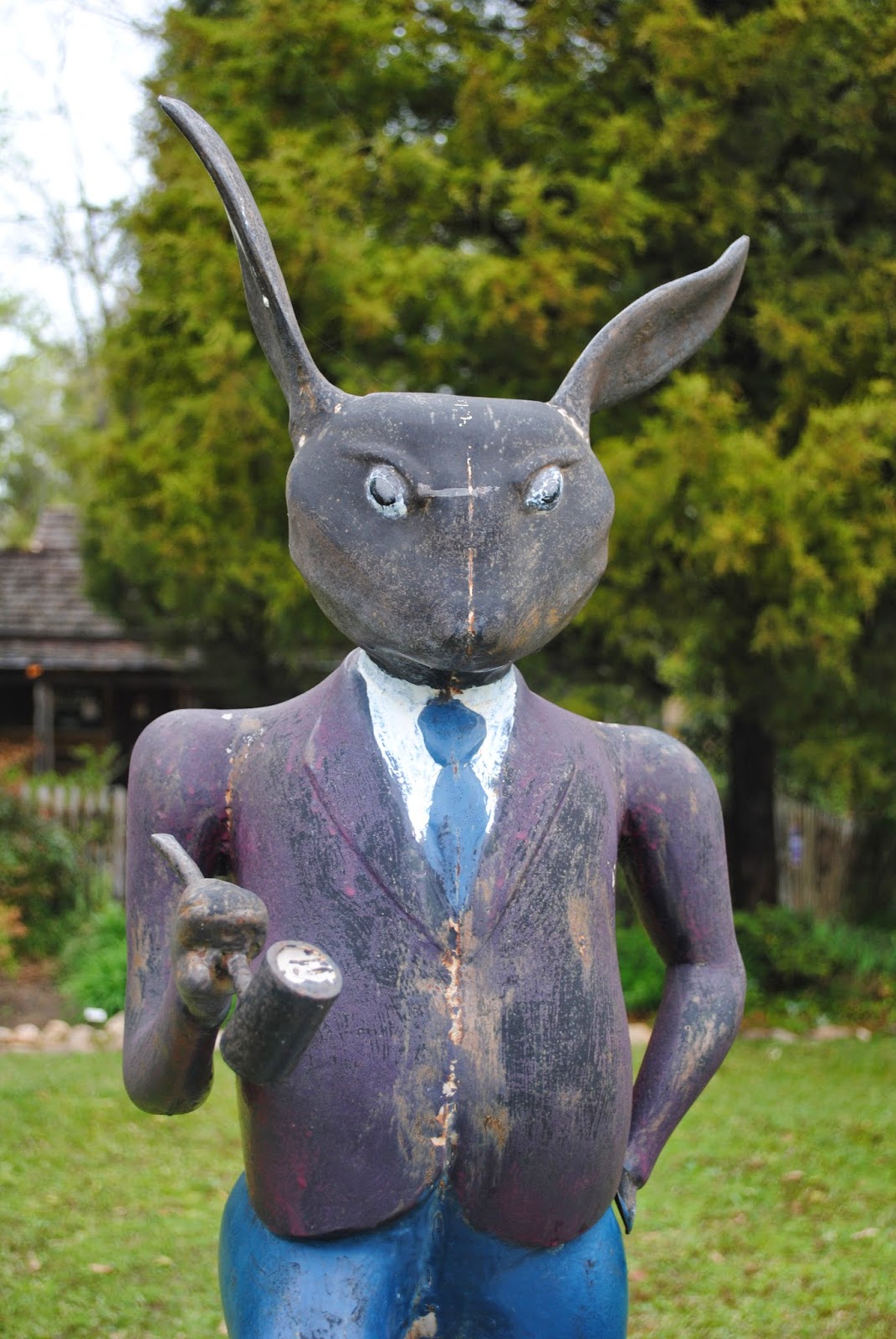 Back in 2011 I went on a great roadtrip that involved a massive spiral around the great State of Georgia that included stops at the Alabama Museum of Wonder, the world's largest Peanut, The Georgia Guidestones, and Jimmy Carter's home town.  During this turbo roadtrip I raced to the Uncle Remus Museum and got their 10 minutes before closing. 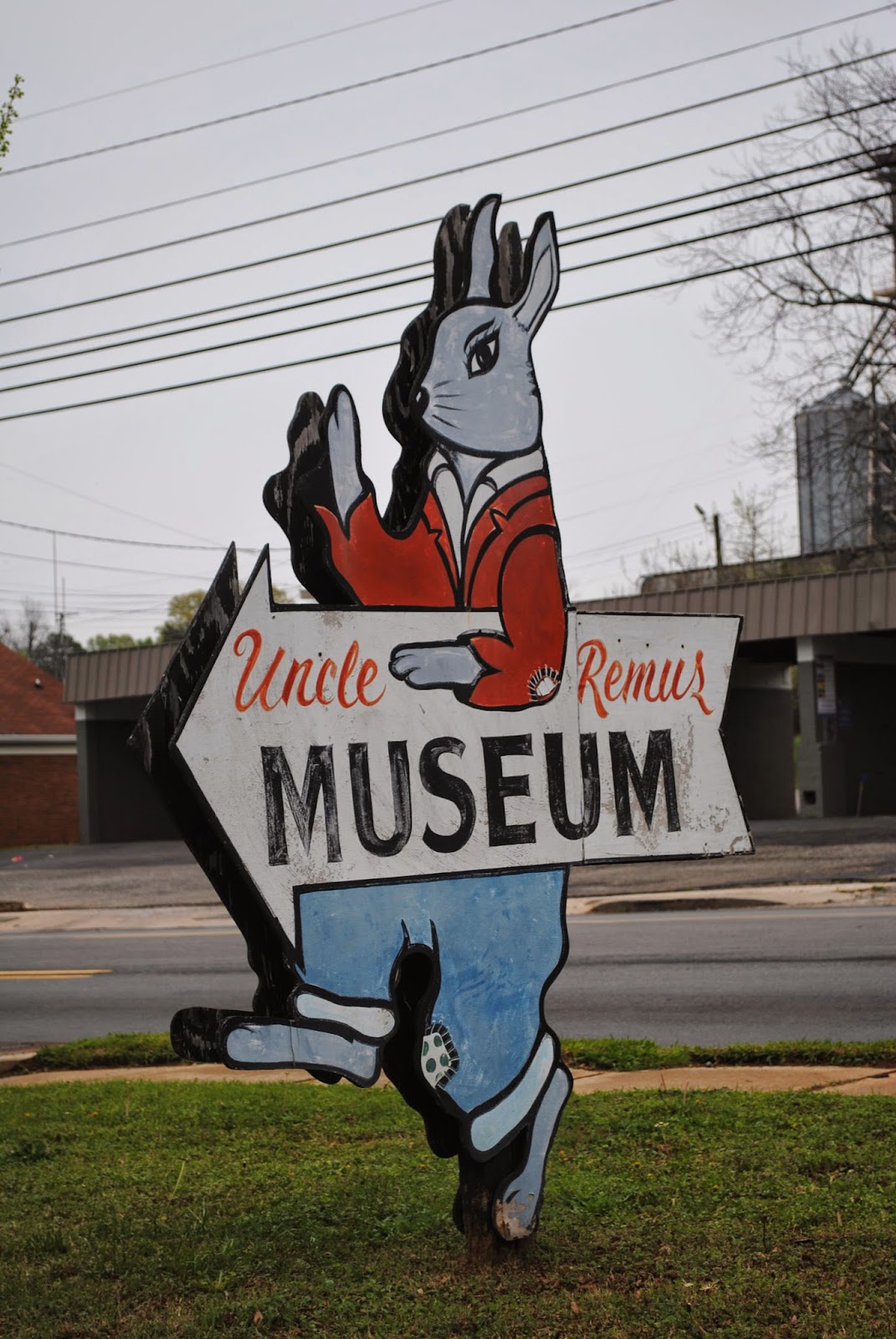 I charged into the museum wild eyed and sweaty and possibly frightened the two elderly ladies who ran the place. 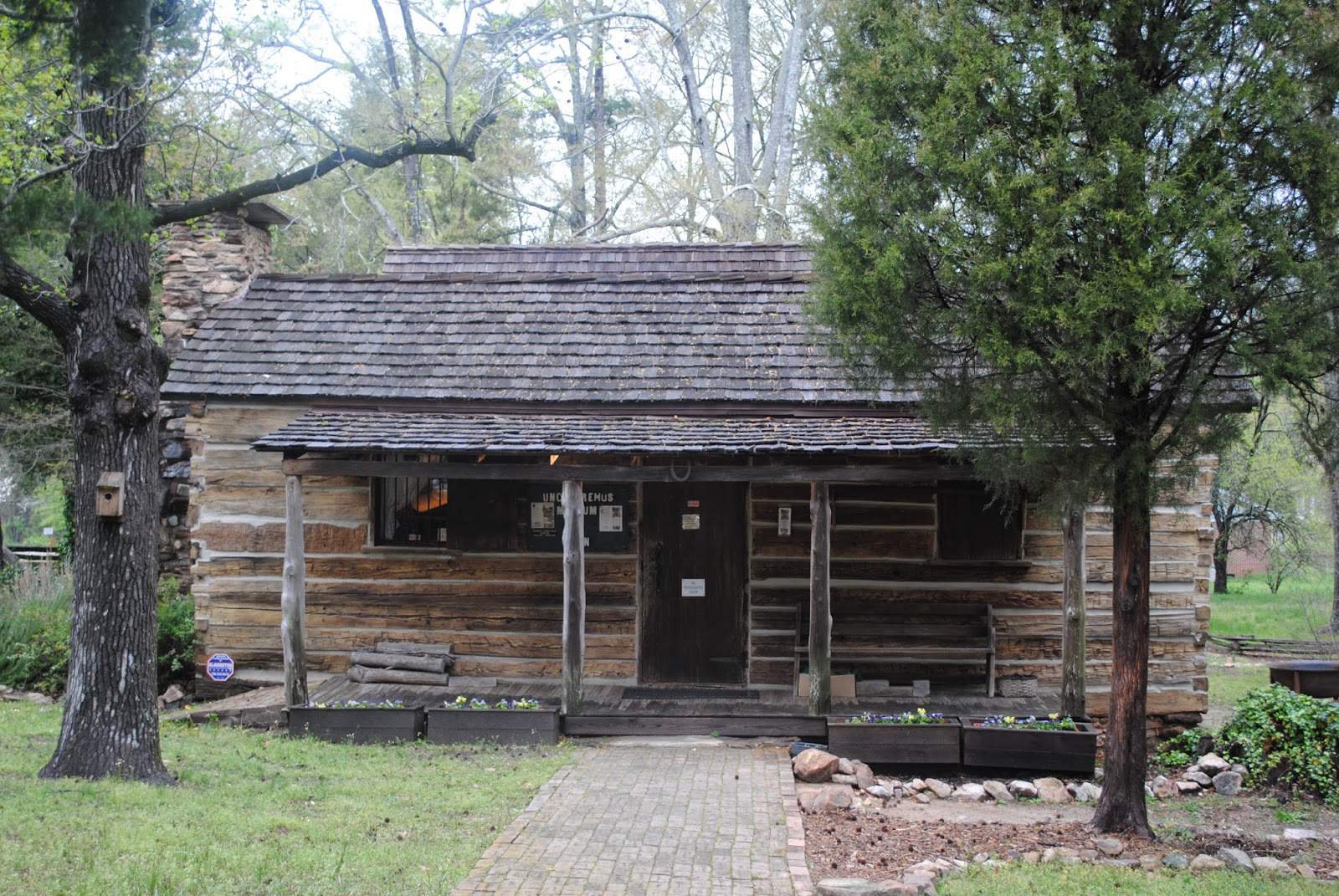 The ladies lamented that they were just getting ready to close up shop, but relented and gave me a tour of the two room museum anyways.  For those of you not in the know, Uncle Remus is a fictional character.  Very few fictional characters have their own Museums, so this is impressive.  Uncle Remus was a fictional African American storyteller creator by sparkling white author Joel Chandler Harris.


The Remus Character was a former slave who told fables based around anthropomorphic animals.  In reality the stories told by the Remus character where genuine African American folk tales.  Joel Harris had actually worked on a plantation alongside former slaves and based his books on the folk stories that they told.  The most famous of Remus's characters is "Brer Rabbit" who's is shown in statue form in front of the museum. 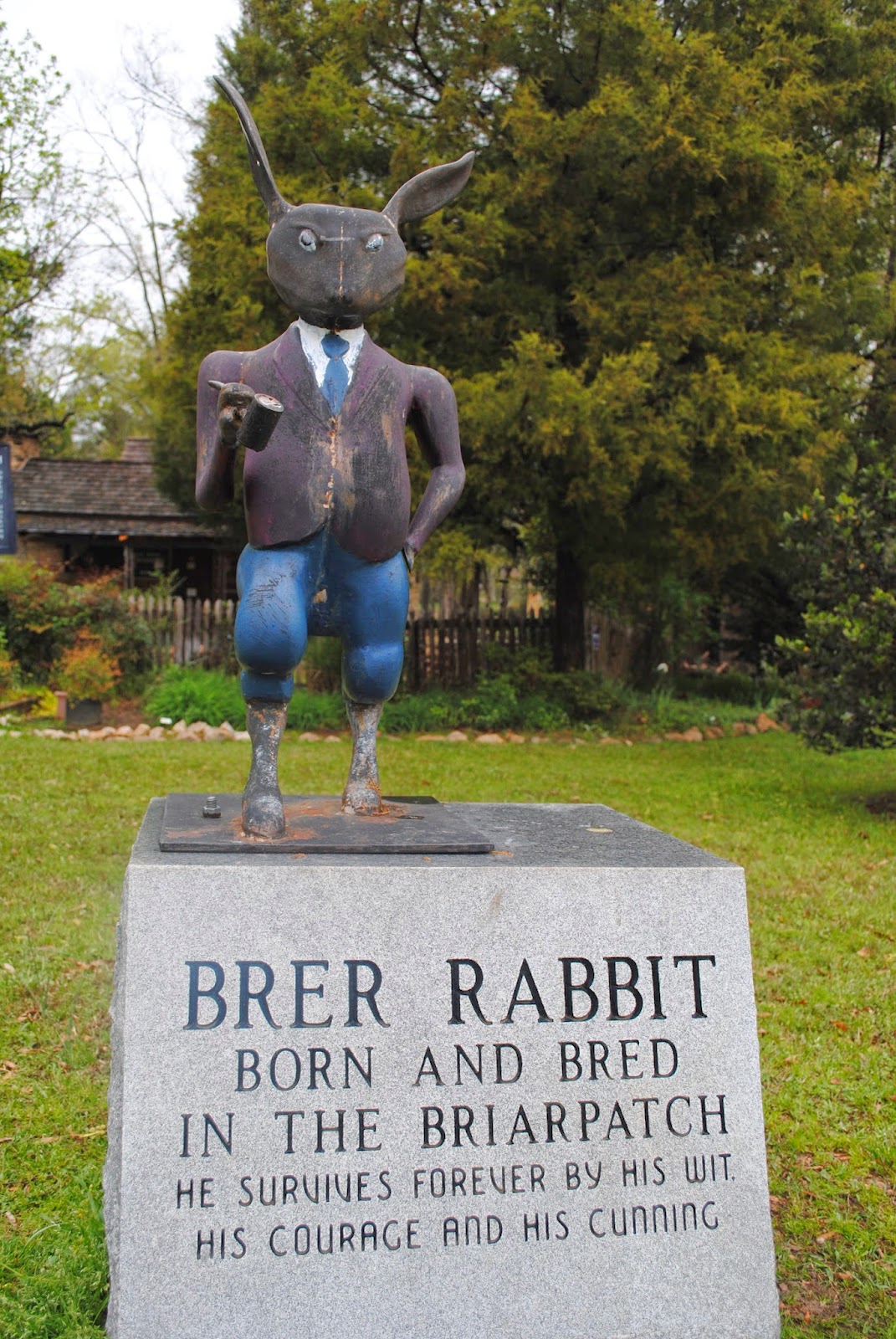 However, while some appreciated Harris's passing on of these great African-American oral traditions (Teddy Roosevelt was a huge fan), others were critical of the way Harris portrayed slavery.  Many felt that Harris was in some ways an apologist for slavery,  portraying slaves as being carefree and happy in what was in reality a brutal institution.   Also, modern audiences struggle with the White Harris's version of black dialect that the books are written in.

The museum itself was very simple.  It has some of Harris's personal items and a few small dioramas portraying his stories.  Sadly, there was no photographs allowed, so you will need to go to Eatonton, GA and see these for yourself.

Of course, if this isn't your kind of thing there is another much larger, grander shrine to Uncle Remus in the South.......... 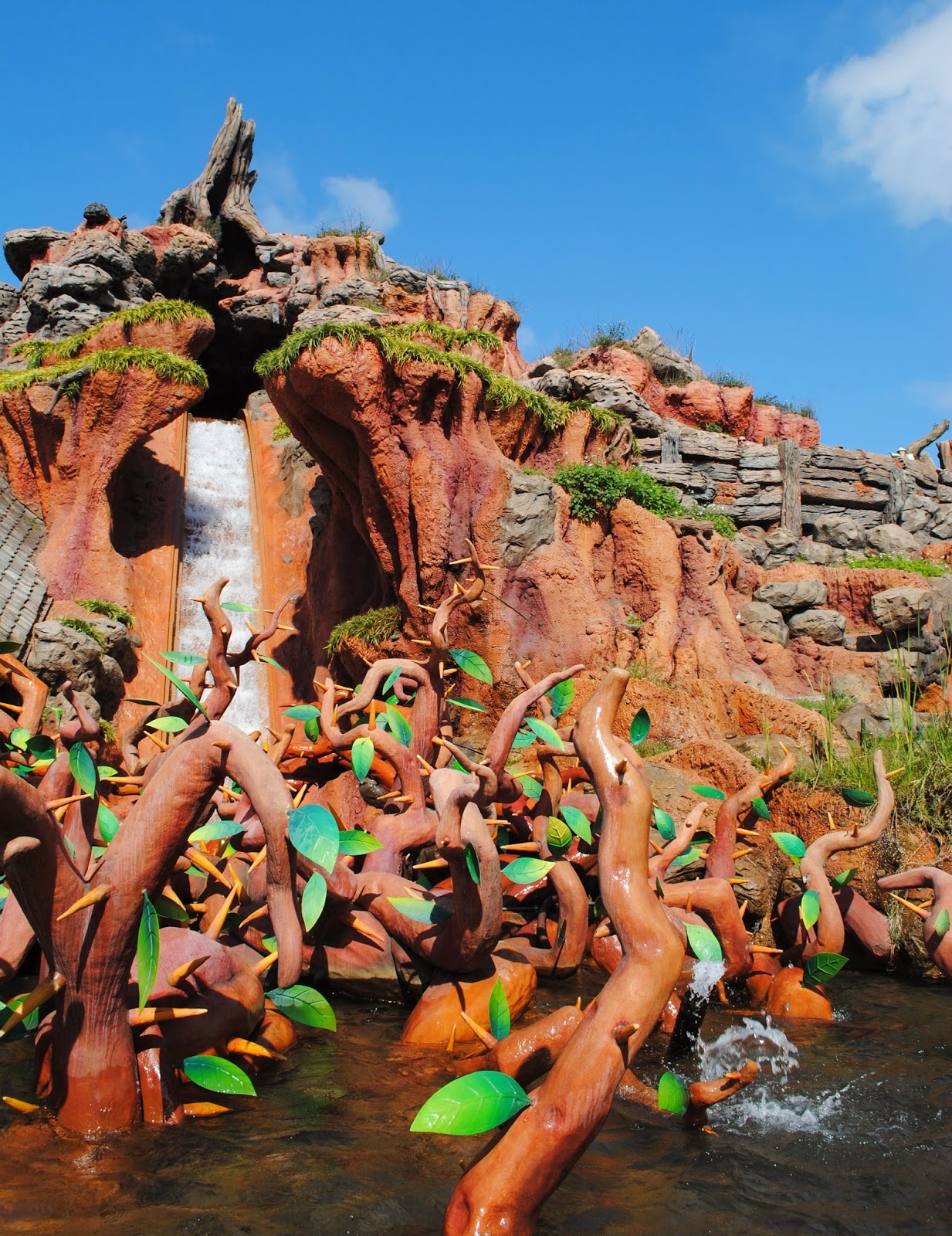 Confused?  You should be.

Let's flash back to 1946 when a young Walt Disney was searching for an idea for his latest film.  Walt decided that the Uncle Remus stories would be a great basis for a live action film that integrated Animation.  Even in the 1940s people in Walt's camp were nervous about about the racial themes of the stories.  This did not deter Walt and "The Song of the South" was born.

Song of the South featured a live action Uncle Remus who told stories of Brer Rabbit, that were shown in animated segments.  Much like the source material, the movie has long made a lot of people very uncomfortable.  Despite being a slave living in the Antebellum South, he was essentially the happiest person in the entire world.

After its initial release the Walt Disney Corporation never felt completely comfortable with the film.  The racial politics were just to touchy.  Because of this, to this day Song of the South has NEVER been released on VHS or DVD.  It seems that Disney just wanted to brush this whole thing under the rug.

That is until 1983 when Disney decided to make a brand new high thrill ride for their theme parks.  Disney has a rich pantheon of characters and properties to work with.  There are thousands of characters of films they could have themed this ride after.  So what do they do?  They decide to make a water flume ride based on Song of the South.  Yes, they themed a ride after a movie that no one had scene in nearly 40 years.  That will resonate with the kids.

Splash Mountain was born.  The majority of the ride is a dark ride featuring the characters from Uncle Remus's stories.  Here's Disney's Brer Rabbit in Animatronic form. 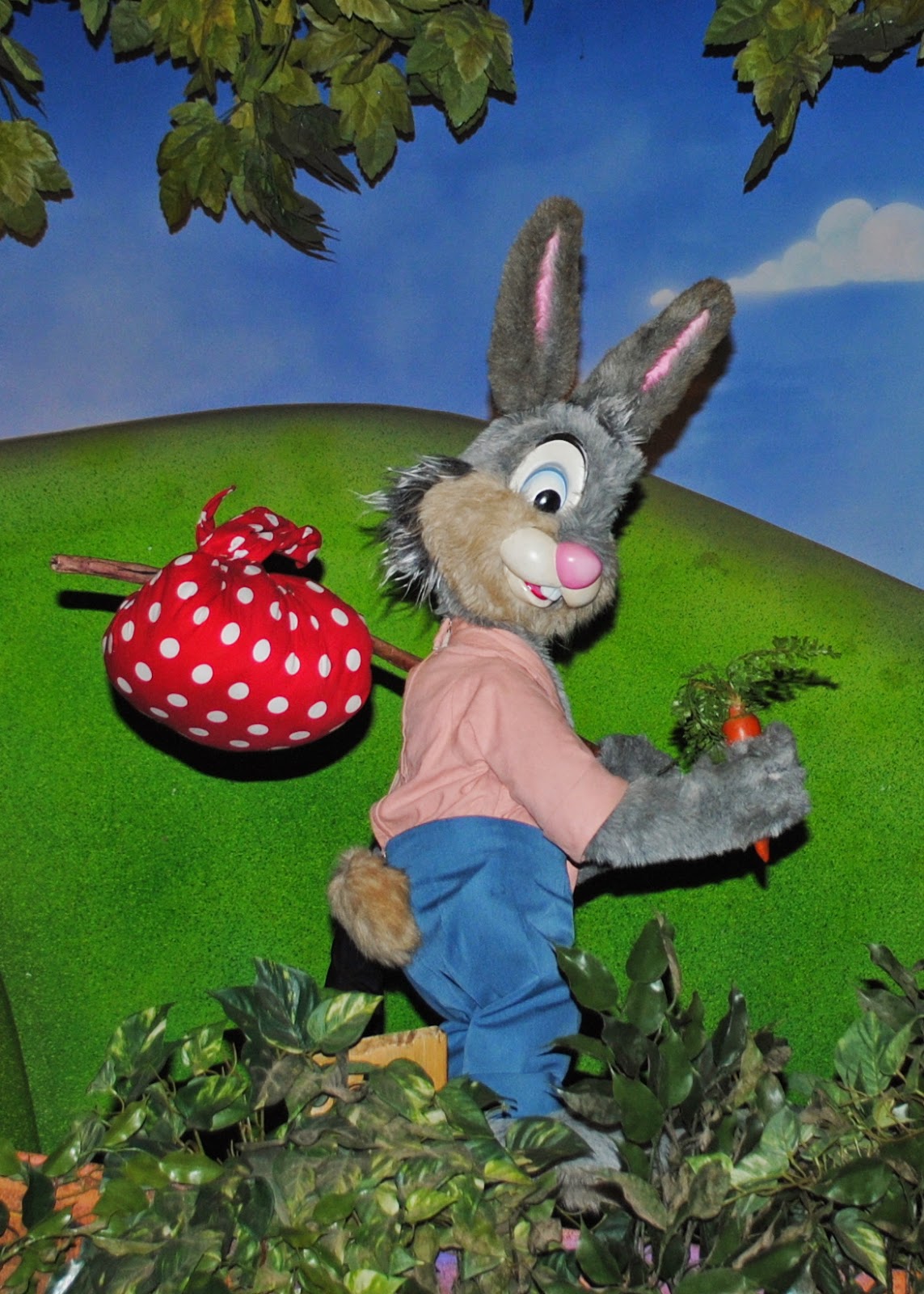 Disney did make a few tweaks to the story because of racial concerns.

First off they completely axed the Uncle Remus characters for fear that people would find his portrayal racist.  They instead replaced him with a brand new character:  Brer Frog. 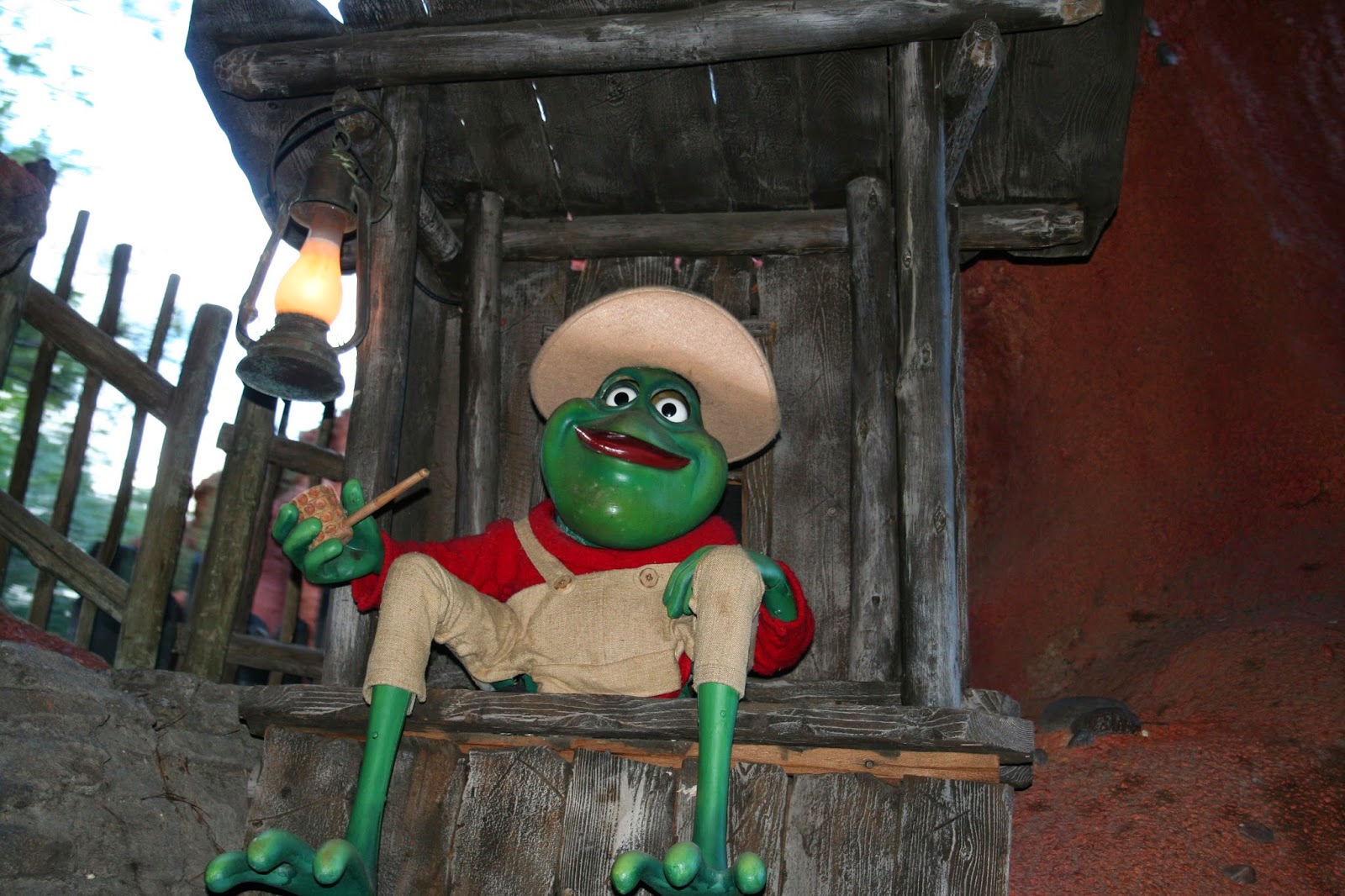 Brer Frog could not be considered racist because he's green, not black.

They would remove another key character from the Brer Rabbit Story "Brer Rabbit and the Tar Baby"........

The Tar Baby (who, as you guessed, was a key character).   For some reason, some people find the Tar Baby offensive.

The original story involved Brer Fox making a baby out of tar.  Brer Rabbit would try to talk to the baby and would become frustrated because the Tar Baby would not respond.   Brer Rabbit would then PUNCH THE BABY out of anger and became entangled with the tar.

Actually maybe the fact that the hero of the story finds it appropriate to punch babies in the face may be the offensive part.

Regardless, the story continues with Brer Fox getting his hands on Brer Rabbit and threatening to kill him.  Brer Rabbit uses reverse psychology and begs Brer Fox to not throw him in the Briar Patch.   Being a major a-hole, Brer Fox flings Brer Rabbit into the Briar Batch, not realizing that this is Brer Rabbit's home, where he is able to safely escape.

BTW, if you are wondering why everyone is named Brer, its an antiquated colloquial word from "Brother". 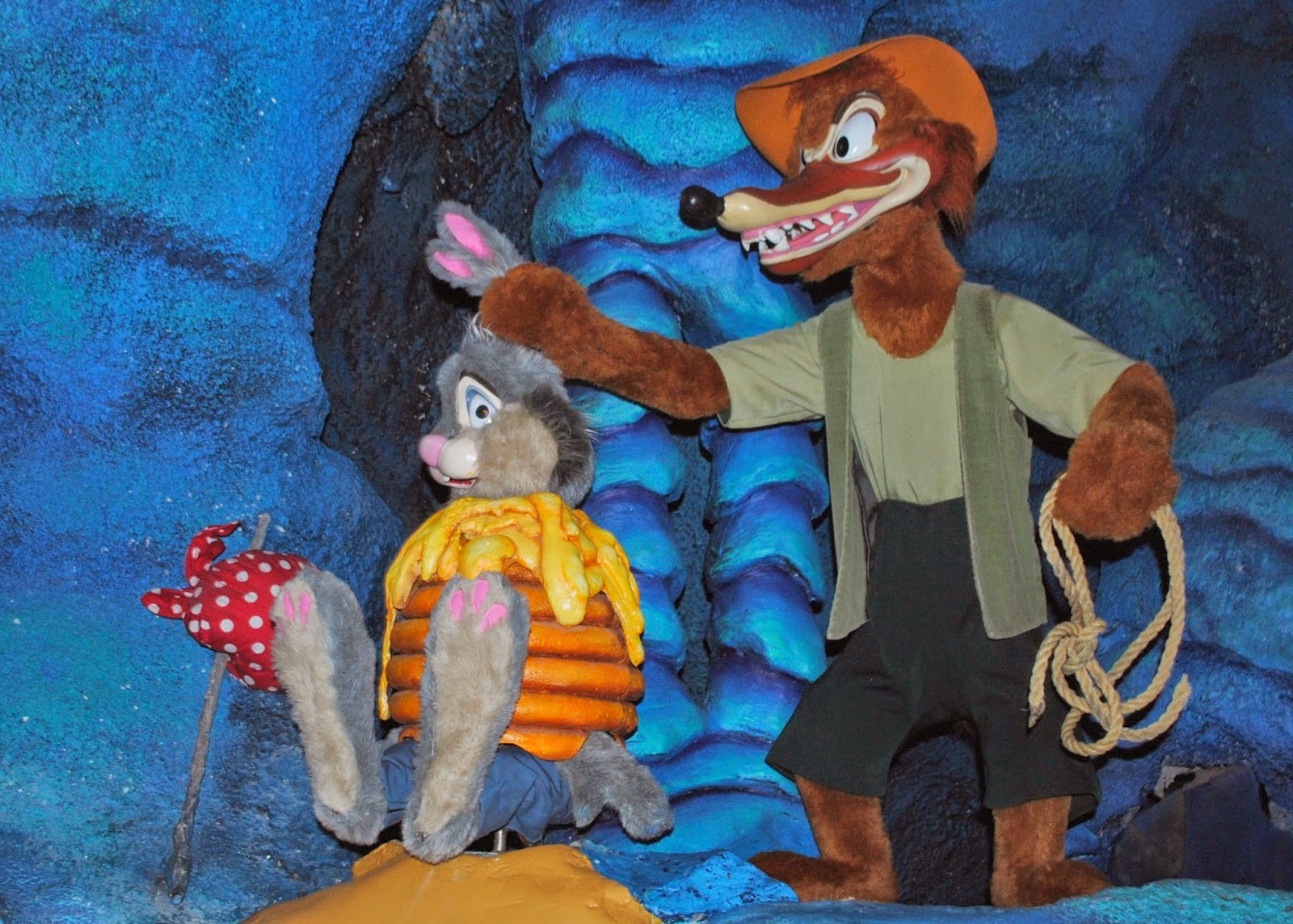 In order to simulate Brer Rabbit's descent into the Briar patch you are then thrust down a 50 foot water drop where it appears you are going to be crushed to death on a giant fiberglass Brair patch, only to slip down into a secret tunnel, conveniently avoiding death.  After the drop, as your failing heart beats out of your chest you are treated to an army of animatronic animals singing "Zip-a-Dee-Doo-Da". 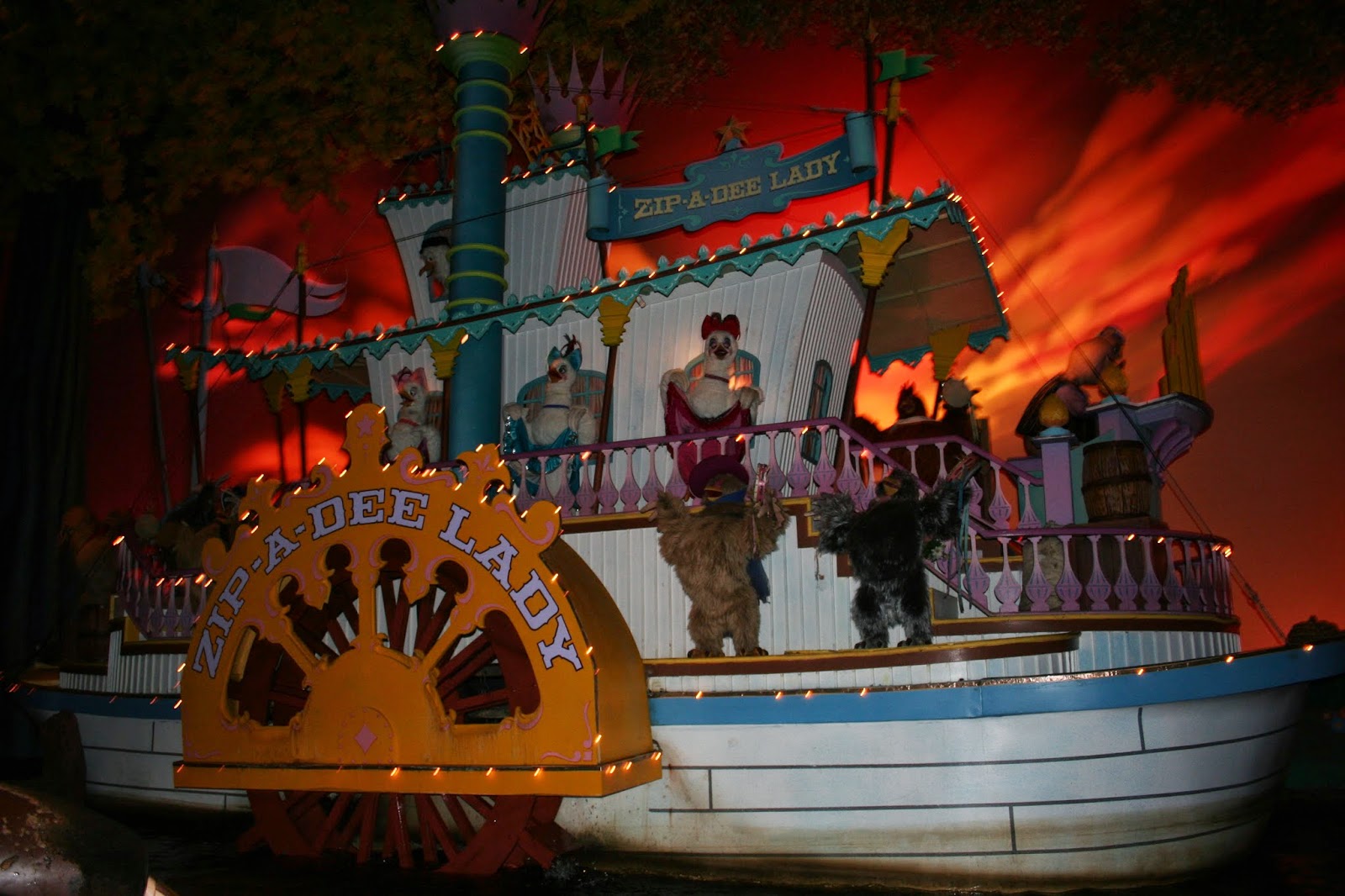 On a side note, these additional characters actually arn't from the original stories, or the Song of the South Movie.  They were actually re-purposed from an old ride at Disneyworld that no one liked. 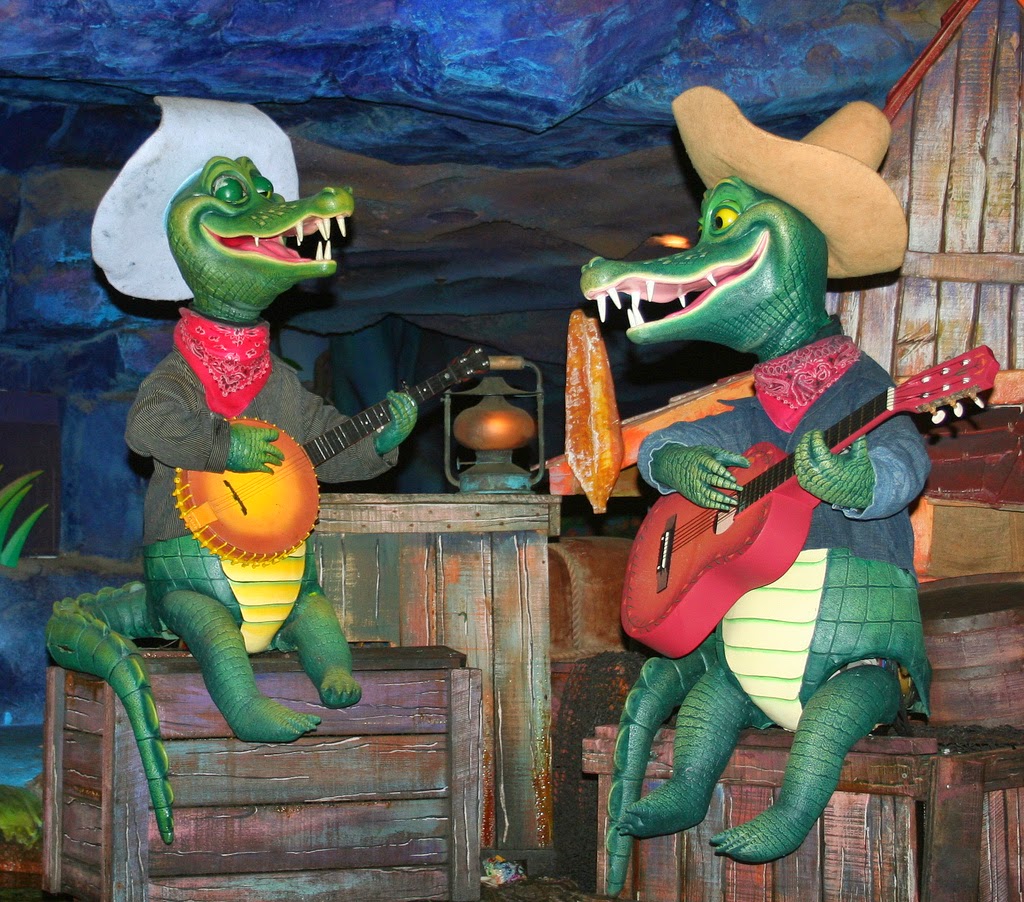 The ride is also notable in that it is the only Disney ride containing a Moonshine Still. 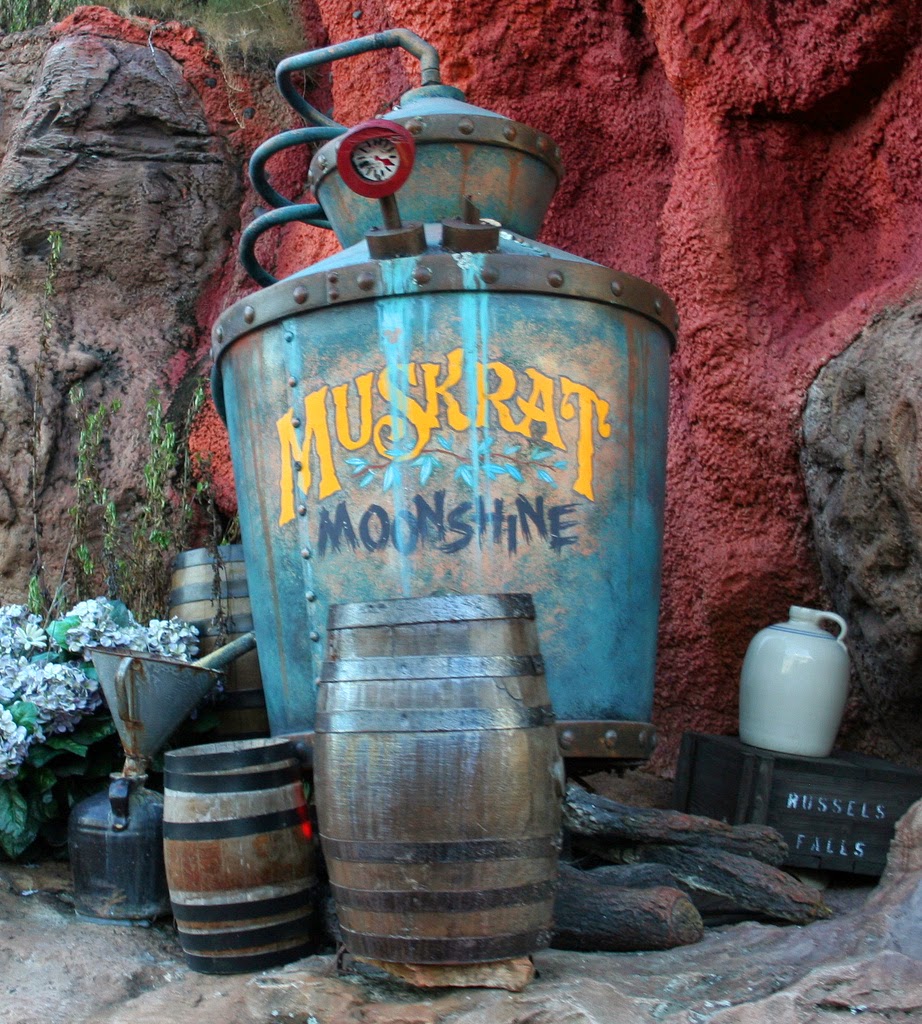 In all honesty, for all its confusing nature, Splash Mountain is one of the best rides at Disney World.  I encourage everyone to make the trek to Splash Mountain to take a 50 foot plunge in the name of Black Folk Lore.