One of the most striking things for outsiders coming into the South is the prevalence of the Confederate Flag.  I remember growing up as a kid in Northern Indiana we were pretty much taught that Abraham Lincoln was the second coming of Christ. I remember seeing a confederate flag on a vanity license plate and thinking that it was the same thing as seeing a swastika.  After living in the South I realized that it was a much more complicated issue then that.  Yes, indeed the Confederate Flag could be used as an implement of hate. But, I have found that to most Southerners who fly the Confederate Flag it is primarily a symbol of Southern Culture and Identity.  I see it as a thing that means different things to different people.  Its a way too complex and touchy issues to make a definitive statement about. What I really wanted to talk about was the odd habit of emblazoning seemingly things on to the flag.  Here are some of the most interesting ones I have seen. Nothing too crazy here.  Plenty of deer hunters down South.  I guess it goes together like Peanut Butter and Jelly. As with the deer it goes with the hunter/fisherman theme, but there is something a little silly about that big green fish plastered on a flag. Because down in the South we appreciate all the fine things in life: hunting, fishing, motorcycles and naked women. 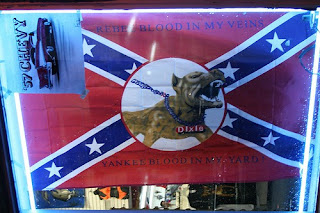 Okay, here is where we start getting a little scary.  Nothing wrong with pitbulls of course, but this one doesn't look very friendly and the "Yankee Blood In My Yard" line does not really reek of friendliness. Some people may find this one a little bit offensive.  It is a Native American slapped onto a confederate flag.  Do remember though, that there were a lot of Cherokee Indians that fought on the side of the Confederacy.  So is this offensive?  I guess you will have to go ask an Indian. The wearer here is trying to show that he has deep pride in his confederate roots, but still loves good old America.   This may be a bit of a contradiction as the confederacy was created for the sole purpose of breaking away from what they felt was a repressive government.  Is this a contradiction?  Again, its complicated. Its the official animal of the South on the unofficial flag of the South.  No argument here, it makes perfect sense. This takes the idea of the south RISING again to a new level.  Zombie soldiers rising from the grave to take out the Yankee scourge.  This is really less of a flag and more of an outline for a high concept movie. 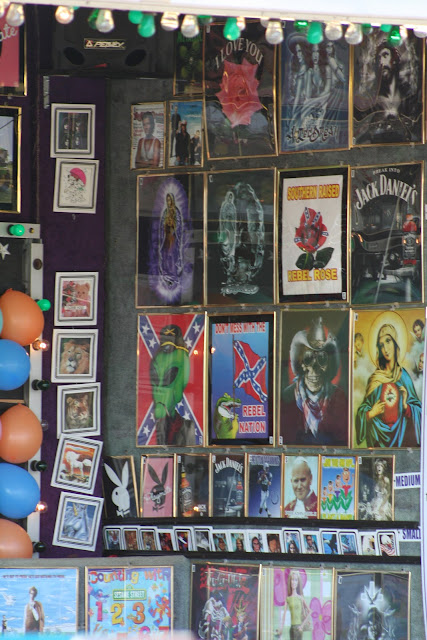 There he is in the lower left.  This one clearly wins on pure absurdity.  What makes it even more absurd is that he appears to be wearing a Union Uniform.  This is a display of carnival prizes from a balloon popping game.  Also you can see here an Alligator holding a confederate flag and a rose made entirely of confederate flags.  The county fair is your one stop shopping place for confederate memorabilia. The Carpetbagger
Posted by Jacob at 10:14 PM