Speedy the Mortuary Mummy (and his friends)

While in the great city of Paducah, KY, I made sure to stop by and pay tribute to its most famous resident.  Charles "Speedy" Atkins. 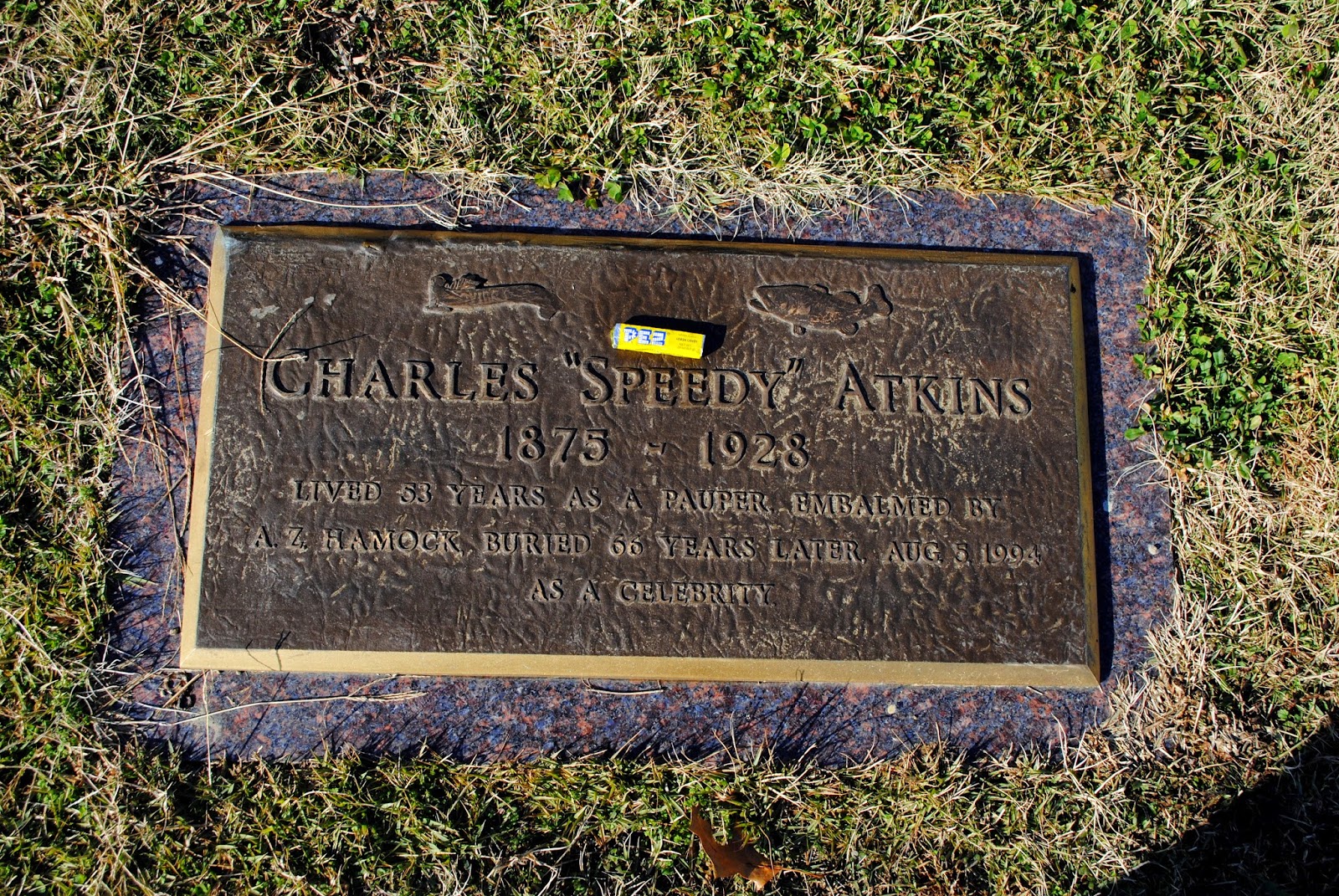 Hmmmmm, something is a little bit off here.   So, here's the deal:  Charles Atkins was a poor black tobacco farmer.  He liked to fish.  Sadly, fishing would be his downfall.  He would drown while on a fishing trip.

With no family and no money, Charles would be delivered to the local black funeral home of A.Z. Hamock.   Under normal circumstances a body of a poor man would be buried in an unmarked grave in a pauper's field.  Mr. Hamock figured that this would be undignified, so he did what any good funeral director would do:  He pumped Charles full of experimental chemicals that turned him into a mummy.  The Hamocks would them display Charles as an oddity in their funeral home for the next 66 years.

Depending on who you ask Charles got the nickname "Speedy" either because he was very quick at picking tobacco as a man, or he was ironically un-speedy as a mummy.  As far as Mr. Hamocks mystery mummy chemicals, they preserved Speedy perfectly, looking exactly how he did while he was alive....


Just kidding!  He was horrifying.  Although, he was a sharp dresser.

The chemical actually turned his black skin red as well,


At some point it was decided that maybe it was time to retire Speedy and his mummified remains were finally buried in the mid 90s.

And no, I have no idea why someone left him a pack of Pez.  I would guess that maybe he liked Pez, but it wasn't available in America until after he died (although it was released in Europe only a year before his death).

This all raises a lot of ethical questions.  Is it okay to turn people into celebrity mummies without their consent?

Okay, it raises only one ethical question, but a pretty major one.

What makes this tale even more strange is that Speedy is not alone.  There are other men that met similar fates, being transformed into mummies and gawked after their death.

One such individual is Cancetto Farmica.  Cancetto was an Italian carnival worker who was murdered in North Carolina in 1911.  A family member put down the deposit for his funeral, but never came back to pay the rest of the bill.  Cancetto was already embalmed, so the poor funeral director did not know what to do.  So, much like our friend Speedy, Cancetto would be put on display in the funeral home for all to see.


And he was even creepier looking then Speedy!  And they didn't even give him a snappy tuxedo.

To add insult to mummification, the North Carolinians had trouble pronouncing his ethnic name, so they gave him an Italian name they could pronounce: "Spaghetti".  Apparently, it is mortuary mummy tradition that they all have to have silly nicknames.  Spaghetti would be on display for 62 years, almost as long as Speedy, and he would still be on display today if someone had not stepped in.  Apparently, a group of Italians in New York (who may or may not have been mafioso), found the treatment of the Cancetto to very disrespectful.  Not only was he denied a proper burial, but he was given a stereotypical name and gawked at.  In 1972 Spaghetti was finally put to rest.  Sadly, I have no had a chance to visit him yet.

Perhaps the most fantastical and bizarre story of a mortuary mummy is that of Elmer McCrudy.  In life McCrudy was a notorious bank robber and outlaw.  When he was gunned down by law enforcement and handed over to a local funeral home, the director saw dollar signs.  He would preserve Elmer in arsenic, prop him up and charge people to come see him.


When a group of men showed up and claimed to be Elmer's family, the funeral director had a change of heart and agreed to hand Elmer over.  It turned out however, that they were actually carnival workers posing as family who just wanted the body to show in their sideshow.  Elmer's long journey would begin as he would turn up in various sideshows and dime museums being sold and traded between showmen.  Elmer would get somewhat lost in the shuffle as his back story as an outlaw became forgotten.  Also, Elmer's physical appearance begin to grow more gruesome and less appealing to the public.  Elmer would disappear from the public's eye.

Until 1976, when an episode of the "The Six Million Dollar Man" was being filmed in an old fun house attraction in Los Angeles.  A stage hand bumped into a mannequin that was hanging by a noose and its arm broke off exposing a human bone.  Horrified, the crew would call in Law Enforcement who would eventually identify the body as Elmer McCrudy.  Elmer had been passed around so much that somewhere along the line it was forgotten that he was an actual person and he was used as a prop in a spook house.  Elmer would finally be laid to rest in Oklahoma.


And so ends our look at the lives and deaths of the mortuary mummies.  Now, the moral of the story is be very specific in your will on whether or not you want to be mummified and gawked at.