Jimmy Carter, Rejected by the Nation, Beloved by the South 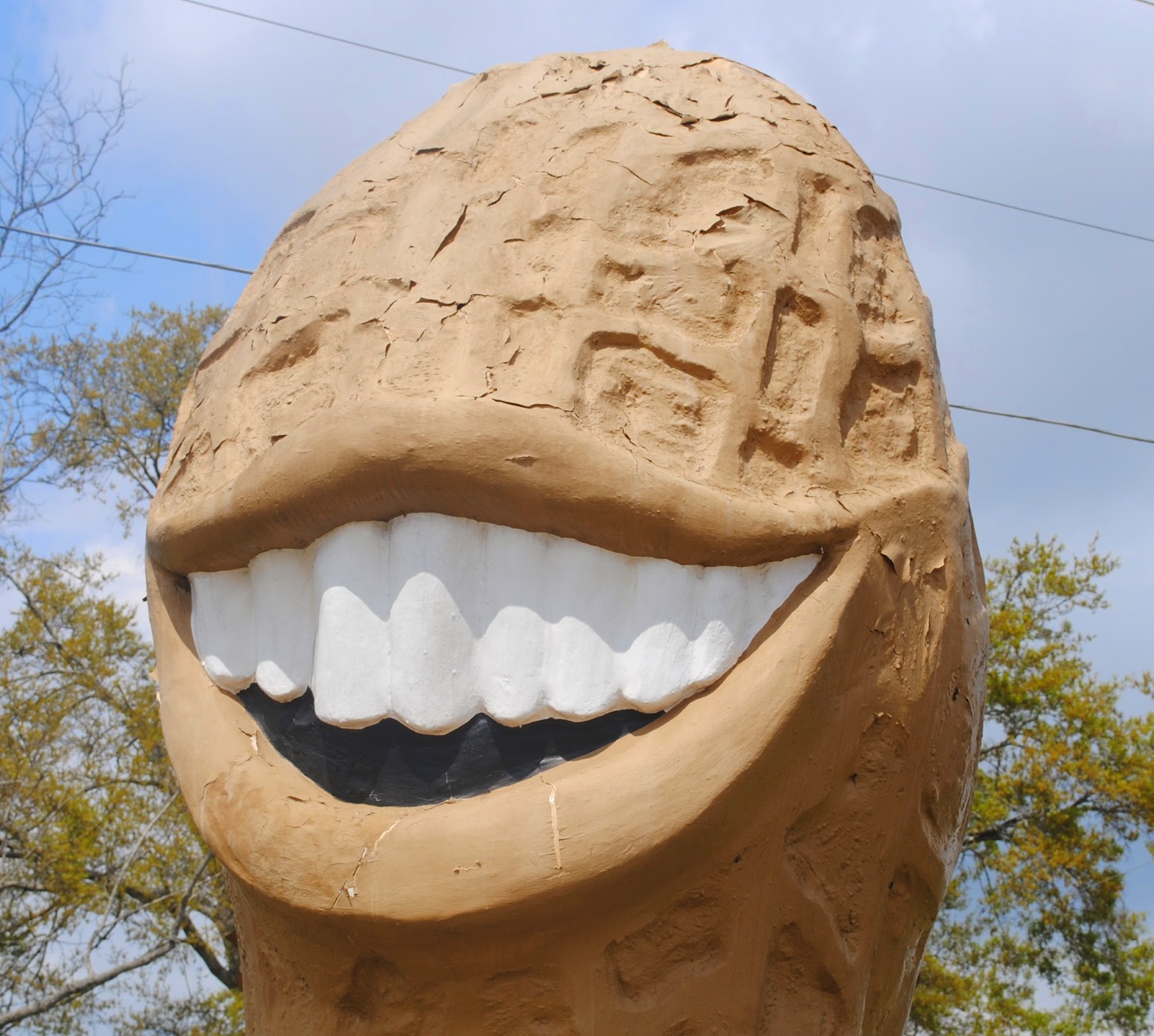 When lists are made of the "worst presidents in US history", sadly a man by the name of Jimmy Carter gets mentioned.  His presidency was a rocky one.  The economy sucked, there was an energy crisis, and he was entangled in a hostage crisis.  To add insult to injury he was even captured on camera being attacked by a rabbit. 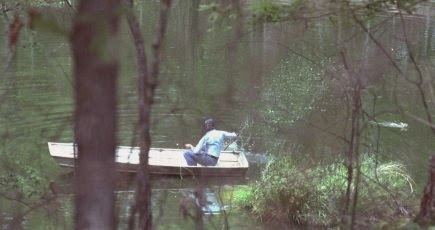 Carter was trounced by republican icon Ronald Reagan when he sought reelection.  Carter only won 6 states in his second election, and they weren't even good ones 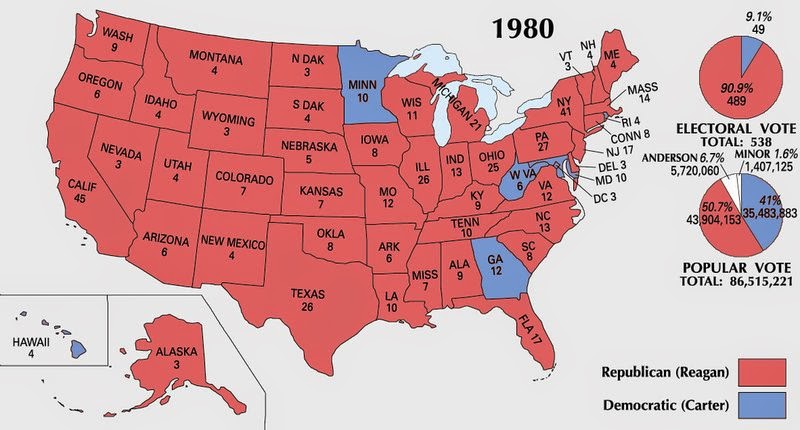 His post presidency was marked by great accomplishments.  He founded the humanitarian powerhouse "Habitat for Humanity" which has helped millions find homes, he has stood up for important causes and even won a Nobel peace prize.

I remember asking my father why Carter was considered a bad president.  "Good men make bad presidents." he told me.

It was 1976, a tumultuous time.  The country had a real bad taste in its mouth when it came to politics, thanks in part to this man.

Richard Nixon, a man so strongly associated with corruption, that he is single handily responsible for the fact that every political scandal now ends with the suffix "gate".

Not only was everyone in the Nation (except Lynryd Skynyrd) bothered by Watergate, but we also had a standing president that had not even been elected. A man who oozed folksy charm.  A hard working church going man.  Jimmy Carter was the man American needed (but not the man they deserved).

Jimmy steam rolled his way to the White House.  Let's take a look at the map. 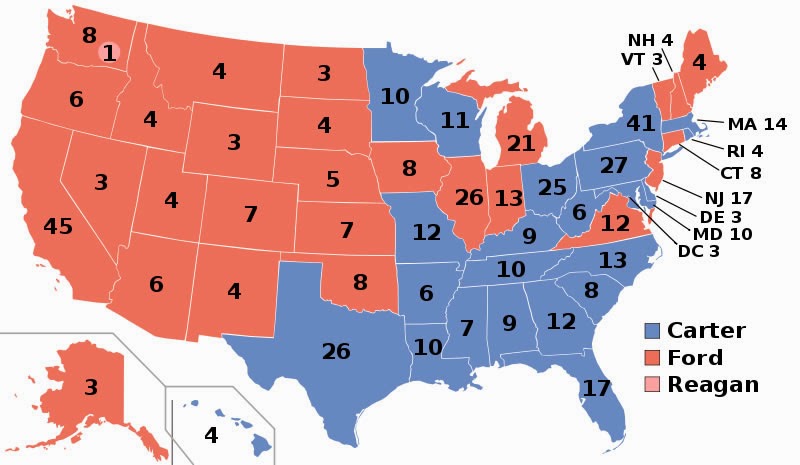 Apparently, 40 years ago, the idea of red and blue states was a little different.  Its not often today that you will see the Democrat sweep the South and loose California.  Its clear the South loved this guy and why shouldn't they?  When it came to the core principles of the democratic party, Jimmy was pretty much in line.  However, Jimmy was an evangelical Southern Baptist who opposed abortion.  There were even times when Jimmy was criticized and ridiculed by the media for expressing his faith.  Some say that Carter is responsible for making evangelical Christianity mainstream.

Eventually, the country changed there mind and decided that letting a good old country boy run the country was a bad idea and replaced him with West Coast Hollywood Elitist Ronald Reagan. 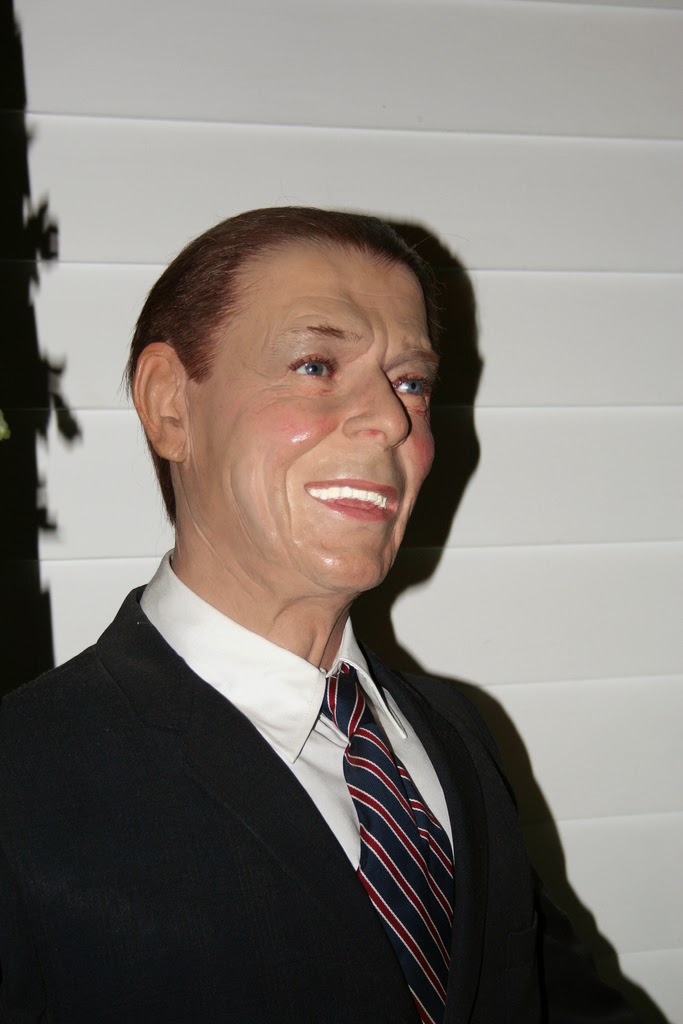 Although he was made to leave Washington in shame, the South never feel out of love with Jimmy Carter and there is no greater example of this then his home town of Plains, GA.  Plains is essentially a city sized shrine to Jimmy Carter. 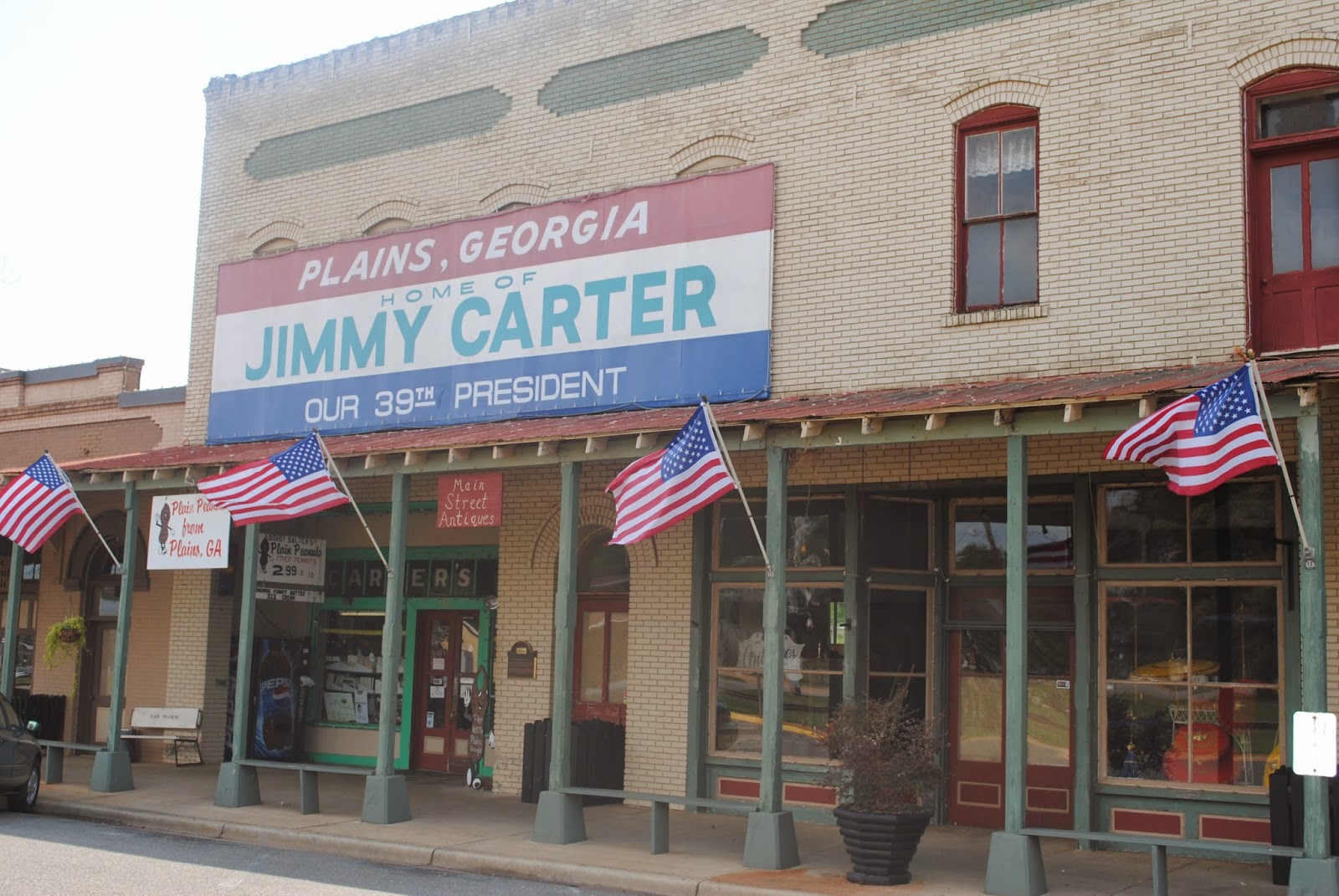 There are tons of Carter related sites to be see, such as the farm house he grew up in. 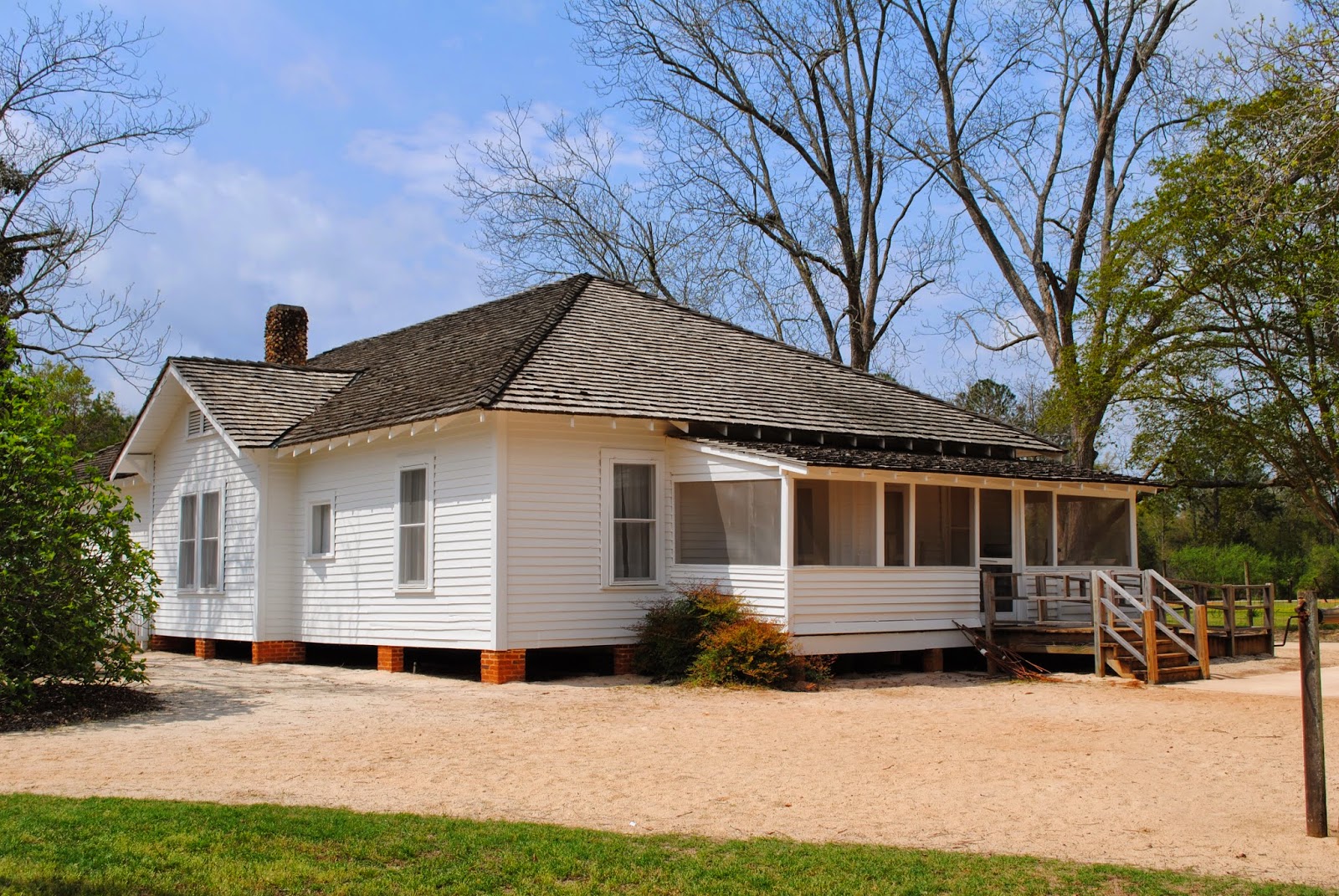 Where you can also see where Carter and all his important childhood moments took place. 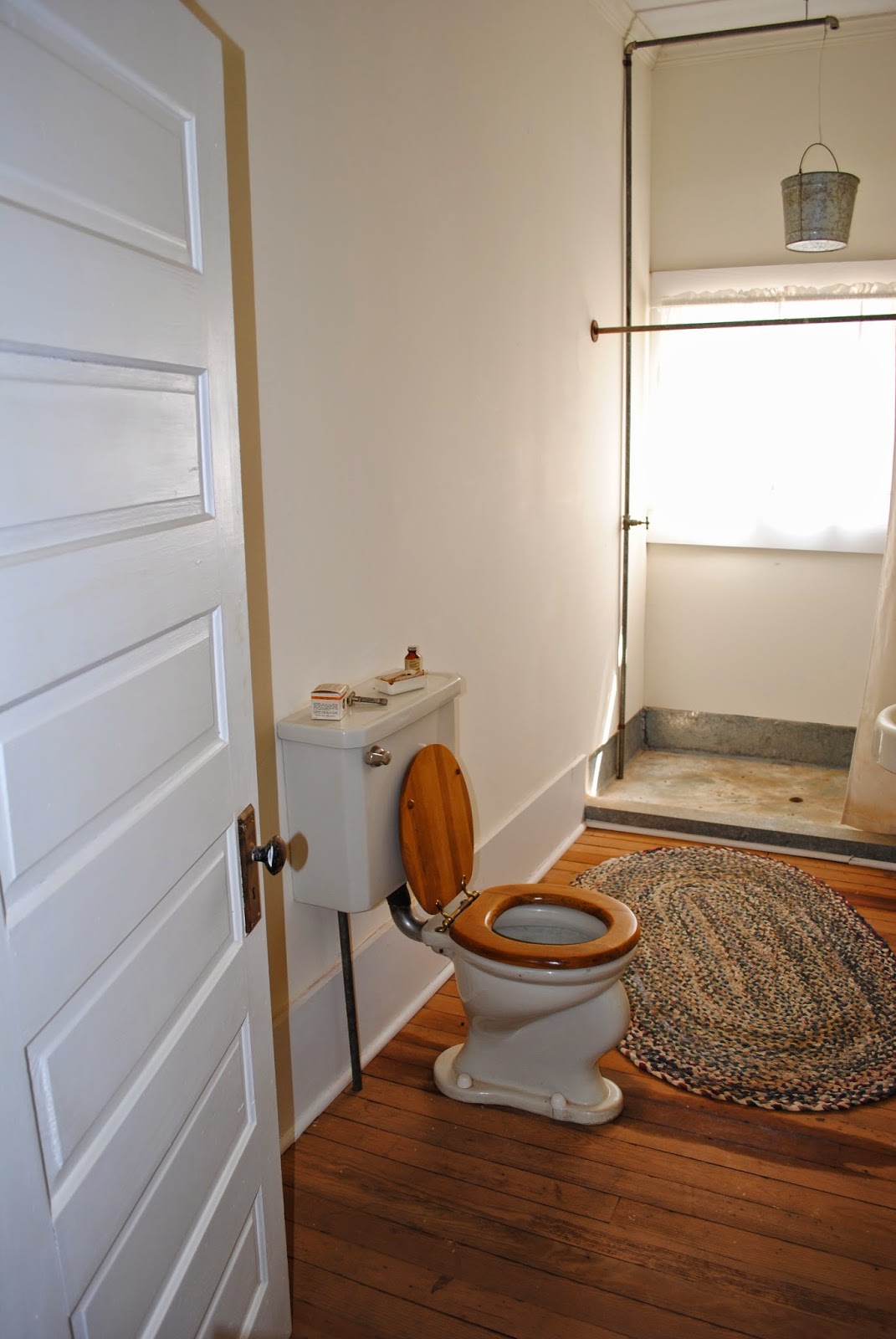 Also located here is his father's general store, where he sold plastic ham to the locals.

You can also check out Jimmy's elementary school. Where he keeps his Nobel Peace Prize..... 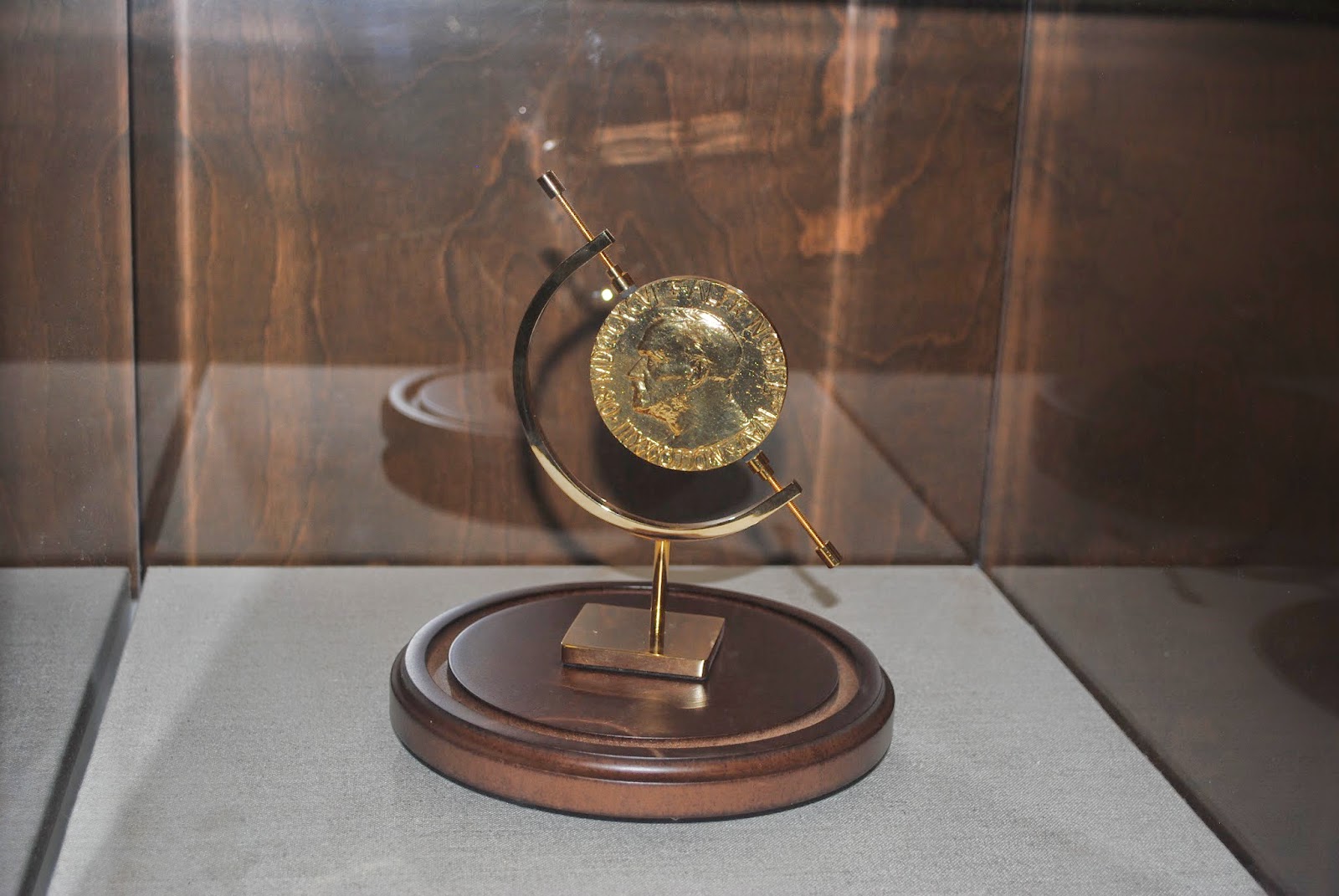 You can also check out Carter's former campaign headquarters where a cardboard cutout of Jimmy still tirelessly makes phone calls.... 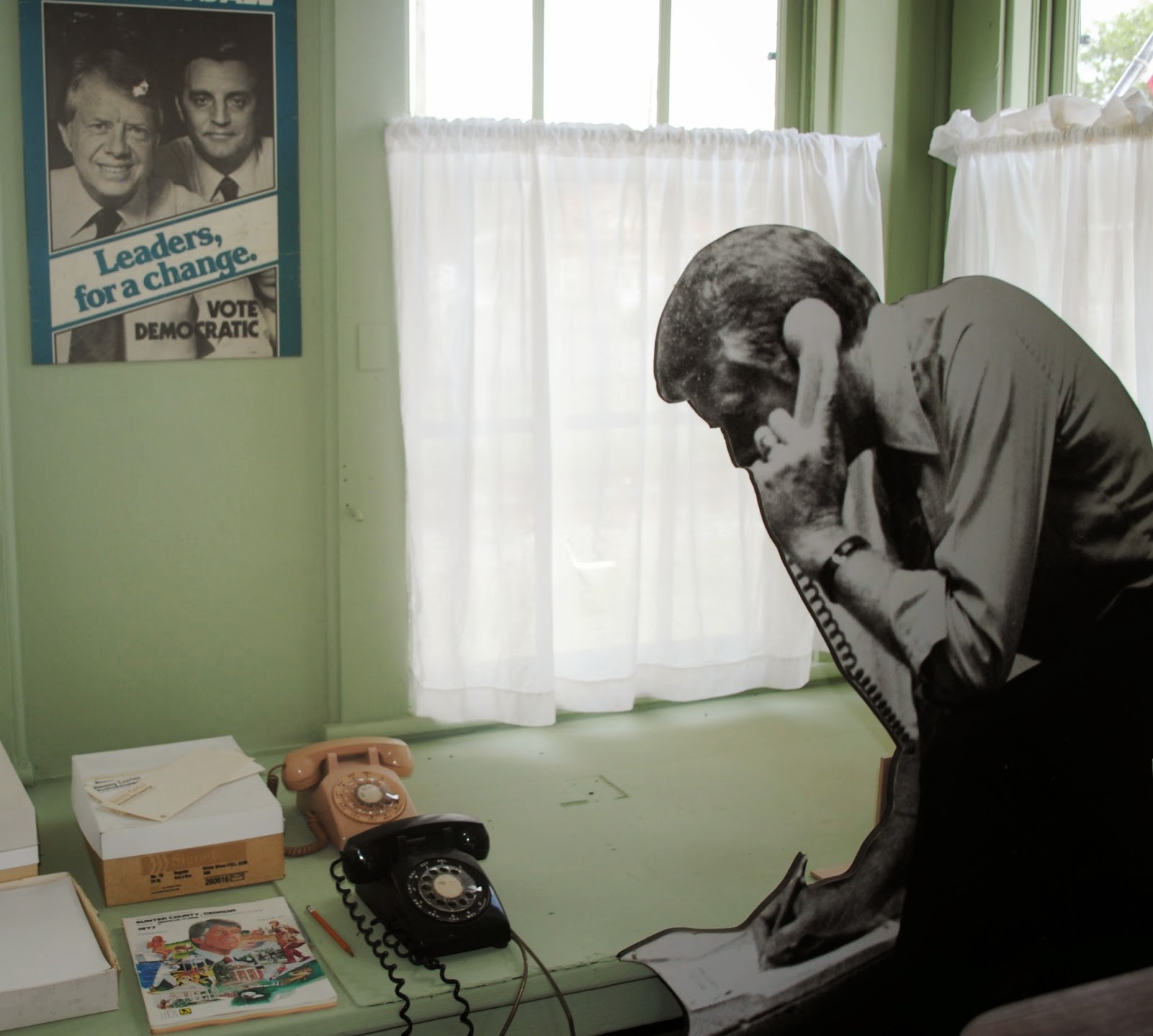 Rounding out the Carter experience is the Billy Carter gas station museum. 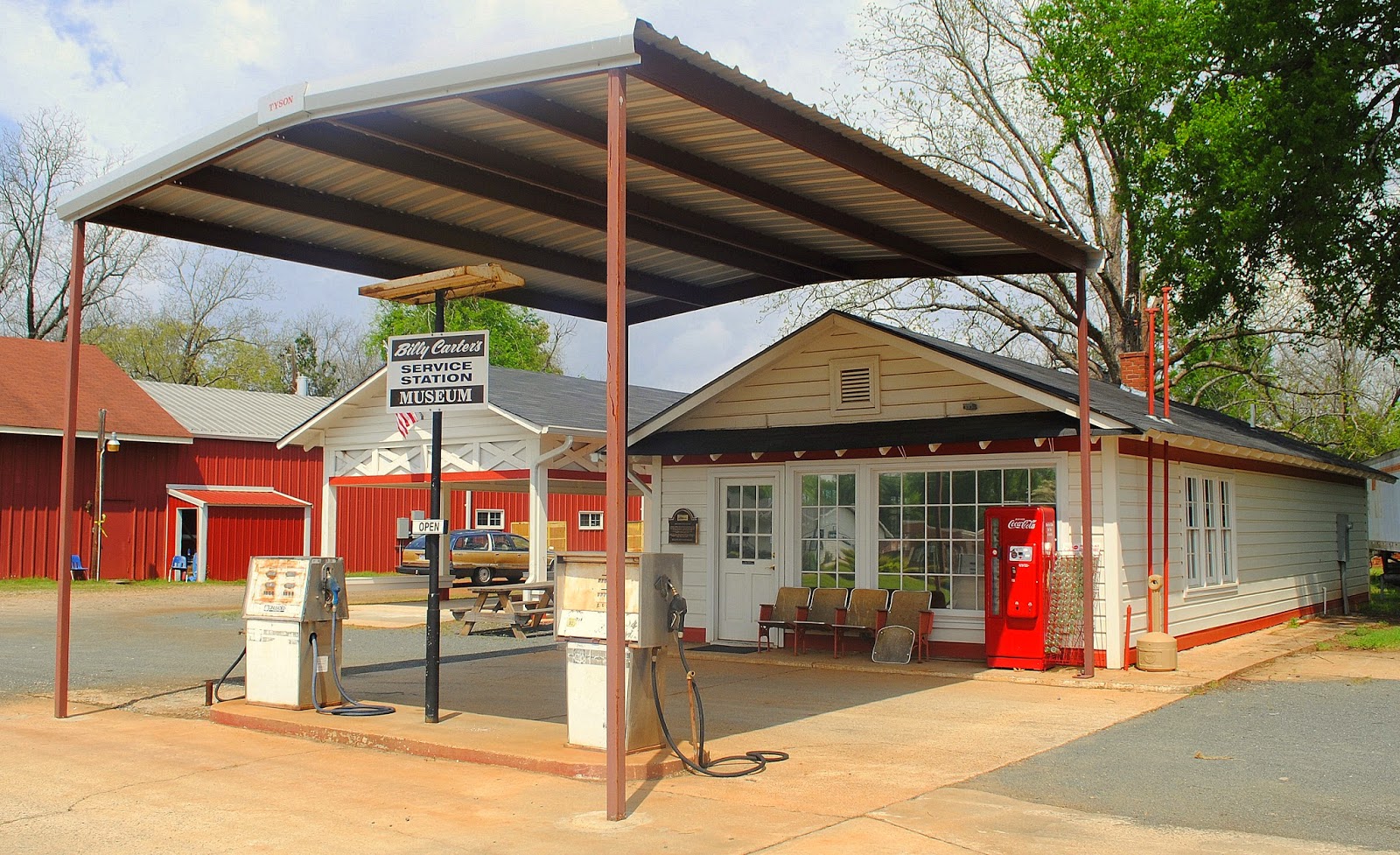 For those of you know don't know Billy Carter was Jimmy's younger drunken redneck brother.  Billy is possibly best known for declaring himself the Colonel Sanders of beer and creating the short lived "Billy Beer".

Billy is also known for controversially visiting Libya as an ambassador.  The problem was that he did this without bothering to get permission from the White House or Jimmy.  Billy would take money from Libya, causing Jimmy to have to publicly denounce his own brother.

Sadly, the Billy Museum was closed, so I missed out of seeing any authentic cans of Billy Beer.  Unopened cases have gone at auctions for $100.

Plains other claim to fame is its peanuts. 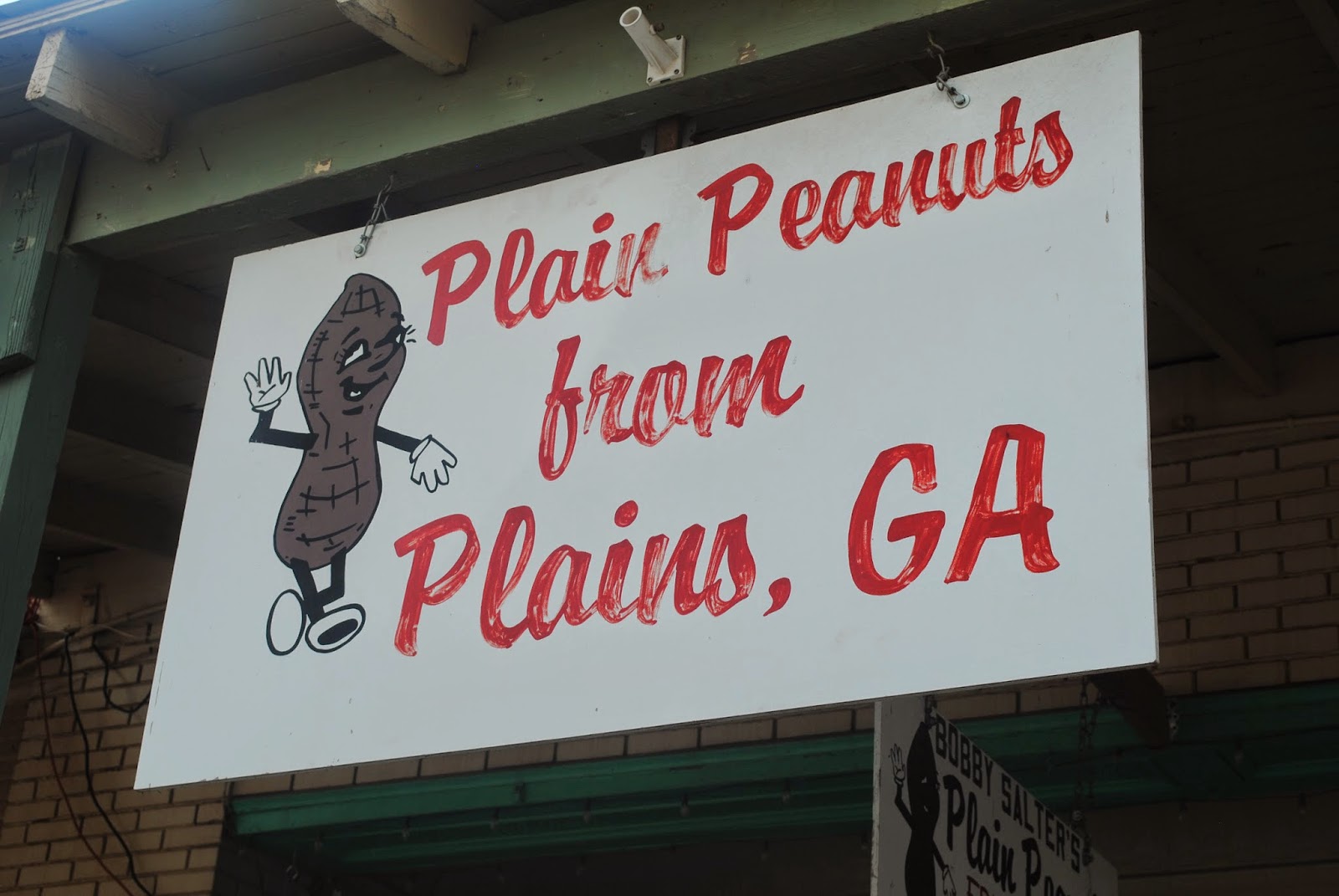 This town is so excited about peanuts that in the downtown area they use peanut shells instead of mulch. 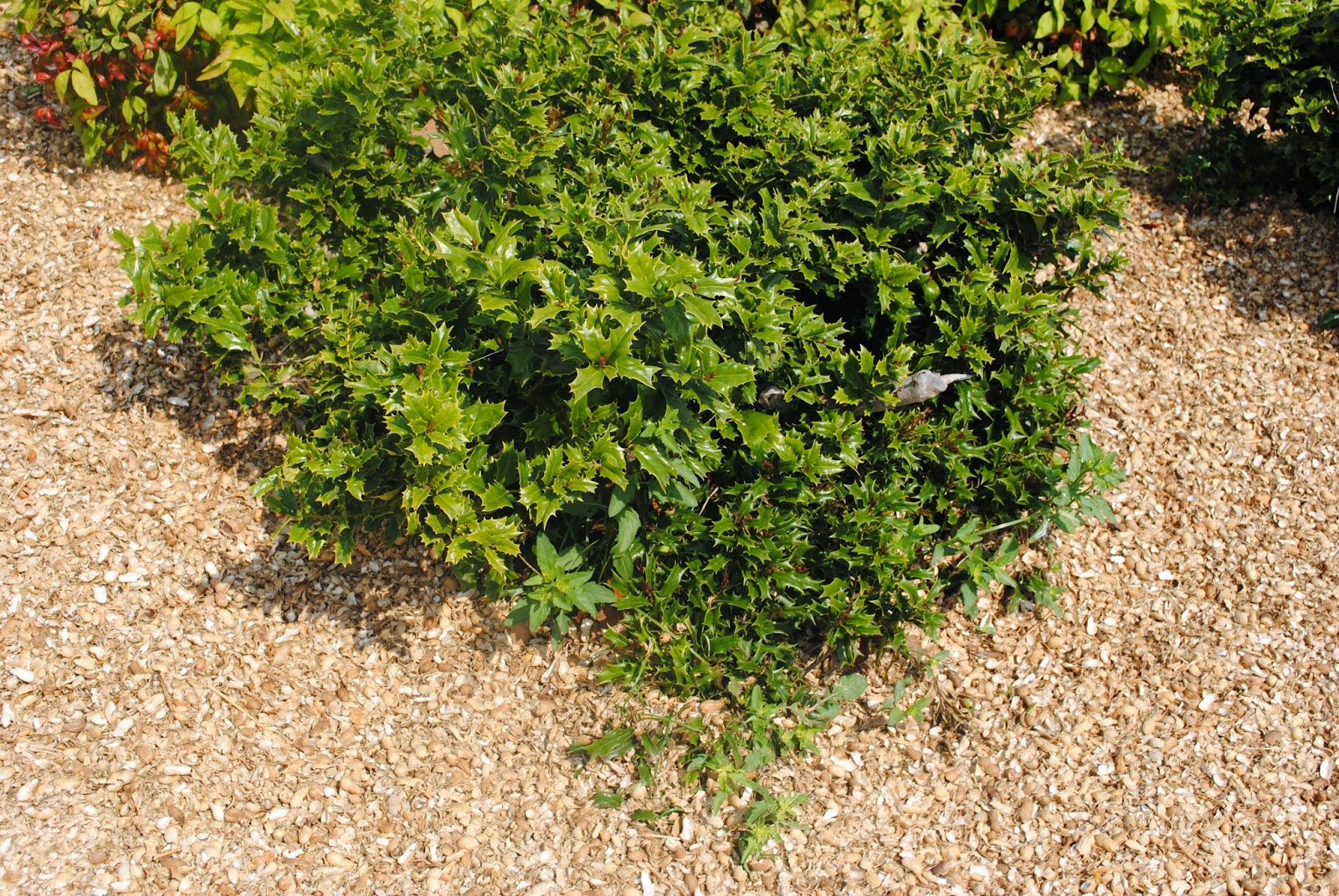 It is safe to say that those with nut allergies should not step foot in Plains, or they face instant death.

What do you get when you combine this towns two claims to fame?  This of course: 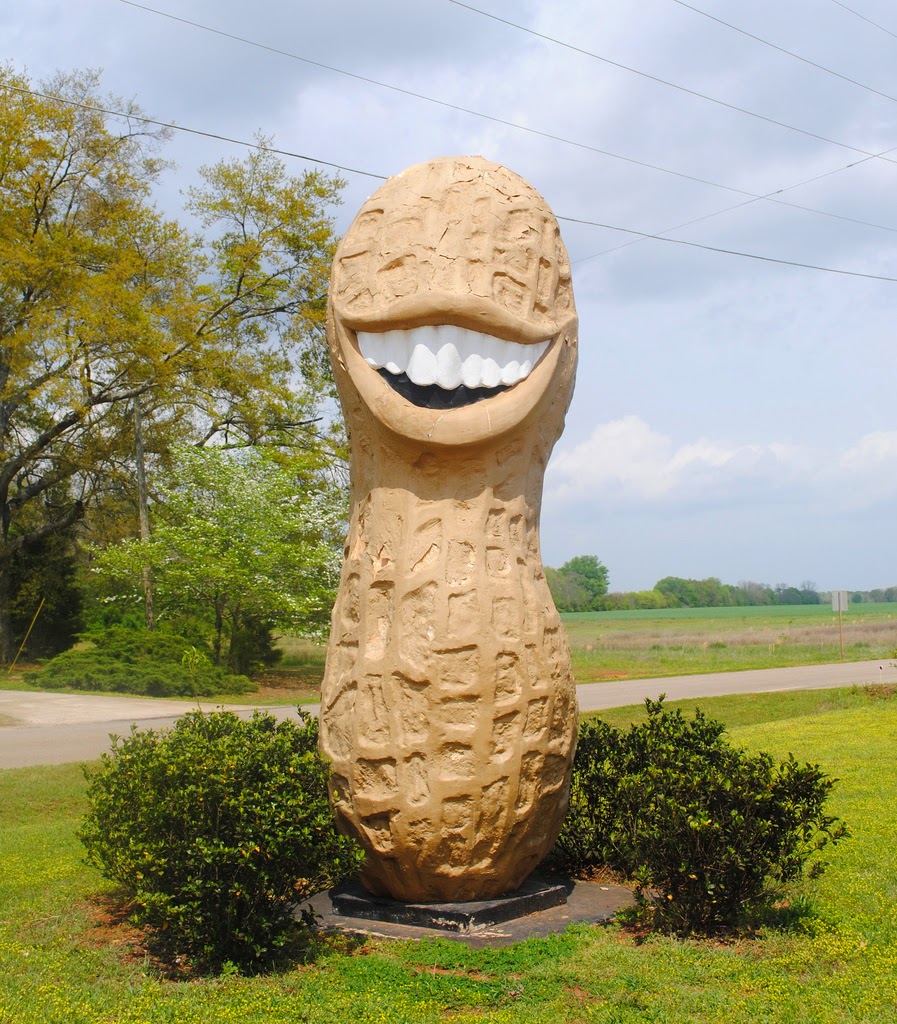 This wonderful Jimmy Carter Peanut hybrid.  This monstrosity was actually used in his Carter's campaign posters. 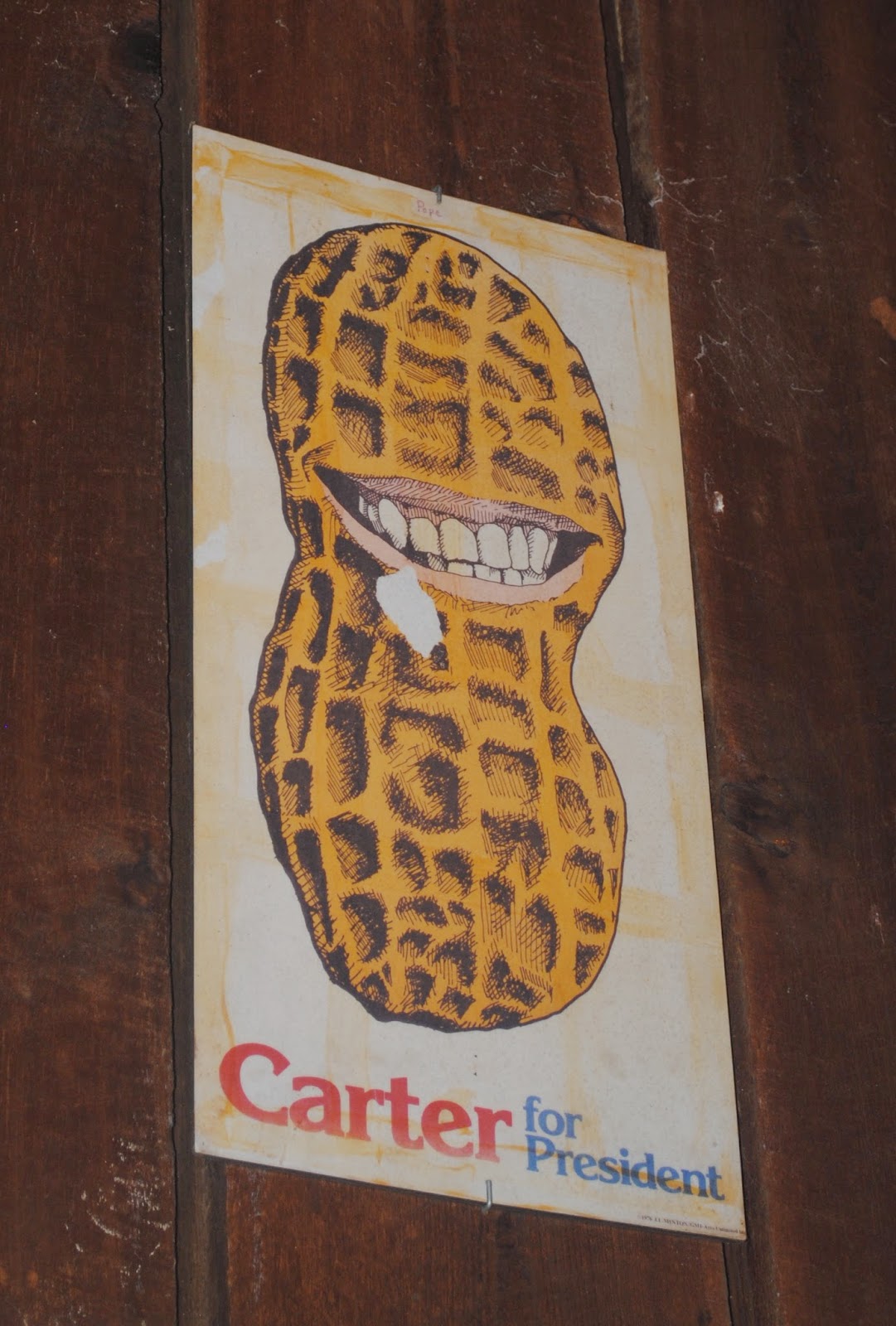 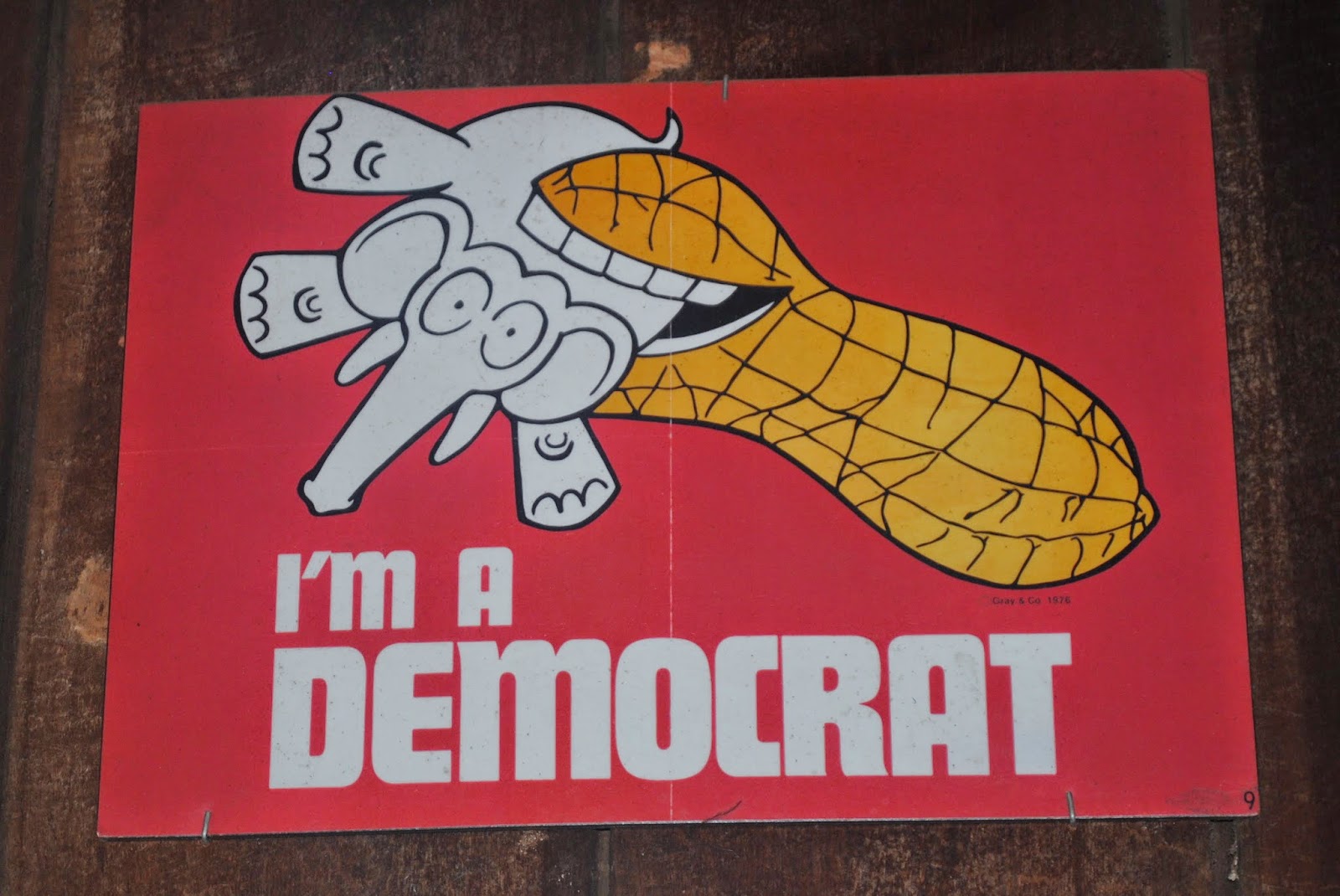 I'm all for the flesh eating peanut replacing the donkey as the Democrats new mascot.....