Stone Mountain, Rushmore of the South


Those driving into down into Southern Georgia are often surprised when they see a massive rock Mountain jutting out of the otherwise flat landscape.  This ancient magma plume goes by the modest name of "Stone Mountain", but it has a strange and illustrious history.  Let's take a quick look. Carved into the Rocky face of Stone Mountain is the world's largest bas-relief sculpture.  Three Icons of the American Confederacy are carved into the Mountainside:  Confederate Generals Robert E Lee and Stonewall Jackson, along with Confederate president Jefferson Davis.

The long strange journey that ended up in the creation of Stone Mountain begin in 1915 when the United Daughters of the Confederacy leased the Mountain with the intention of creating a monument to the Confederacy.  The original design was ridiculously over the top, and was intended on being a seven mile procession of carved horses and soldiers wrapping all the way around the Mountain.

The Confederate Daughter would hire a young up and coming sculpture by the name of Gutzon Borglum to begin working on the sculpture.


Perhaps the most troubling aspect of Stone Mountain is its connection to Ku Klux Klan.  The monument itself was at least partially (if not primarily) inspired by the Klan. 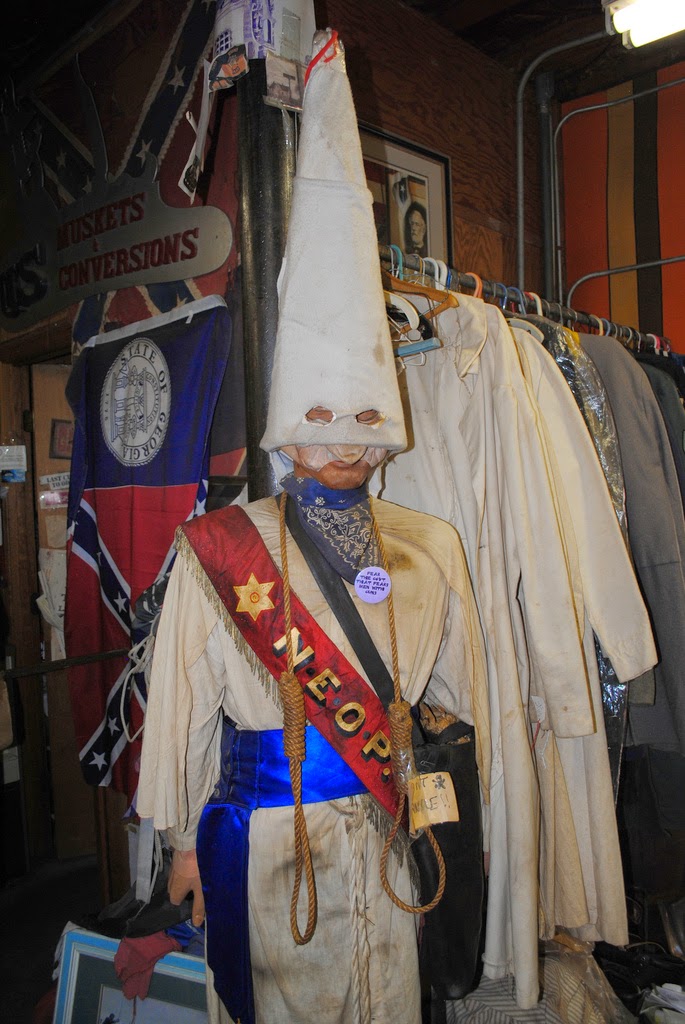 The same year that the idea of the sculpture was born, the second incarnation of the Klan was founded.  A ceremony complete with burning cross was held on top of Stone Mountain signifying the resurrection of the evil institution.  In fact, the owner of the property signed an agreement with the Klan that they would always be permitted to use the mountain for gatherings.  This agreement would last until the state of Georgia gained control of the monument.

Even the young Gutzon Borglum would become a member of the Klan while working on the sculpture.

Thing would take a turn when Gutzon left over creative differences.  Gutzon would move onto another little mountain carving project known as Mount Rushmore.


Yes, Mount Rushmore was carved by a Klansman.


Of course this also means that "The Rushmore of the South" actually predates the actual Rushmore.

As new sculptures were brought in the size of the Sculpture was continually whittled down.  Starting from the ridiculous 7 mile carving, it was decreased to include about a dozen soldiers, then again decreased to just the three current figures riding their horses, finally the horses legs where nixed.  In some ways the sculpture was never really finished, but in the 70s it was determined "good enough".

Today the Mountain is a popular Southern tourist destination that attractions visitors from all over. 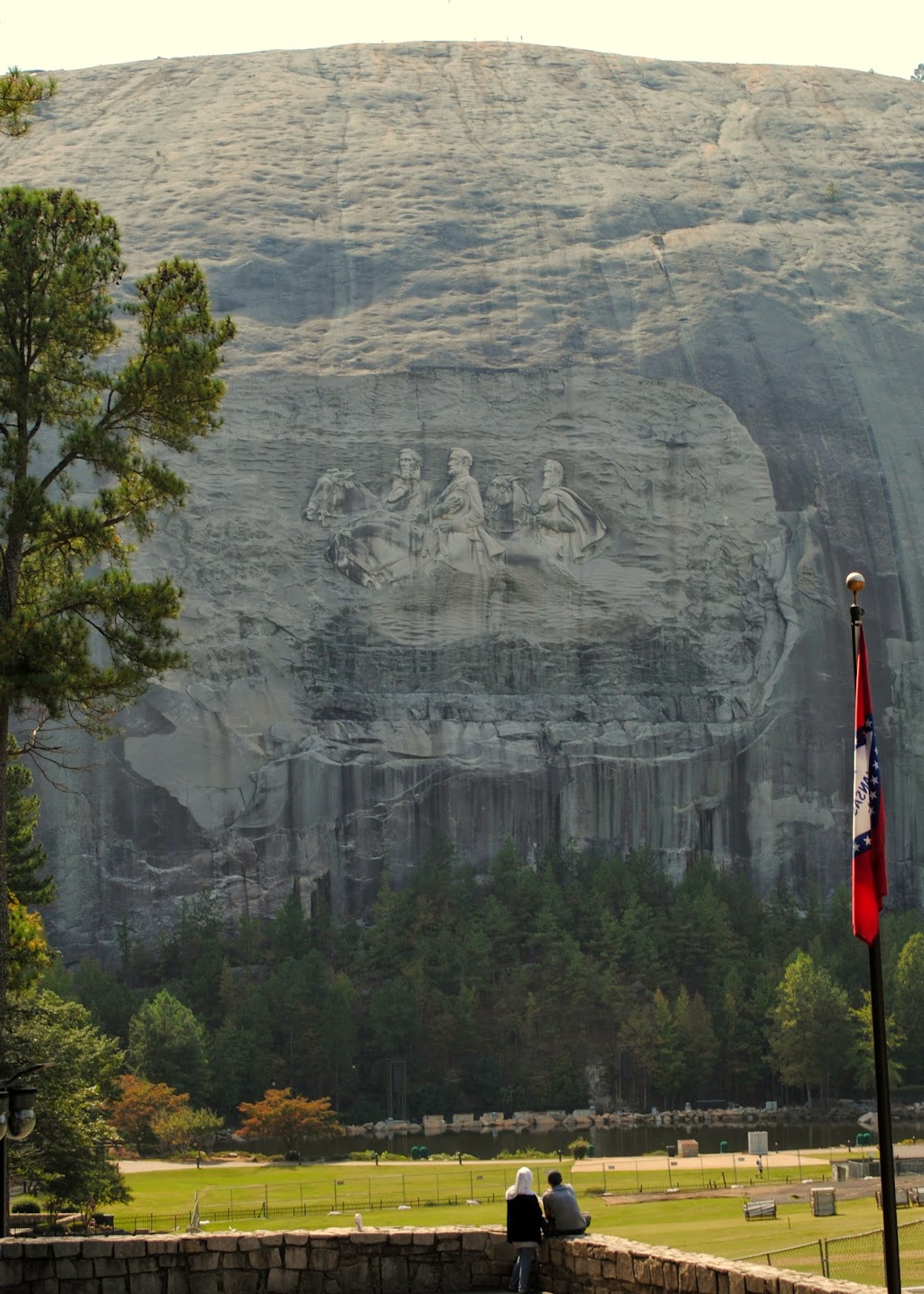 Now, I am for a good photo tourist op, but this sorta thing bugs me.  Why exactly are they taking a picture of you in front of a fake Stone Mountain when the real Stone Mountain is literally right there?

You are herded into the cable car like cattle and are forced to deal with your fear of claustrophobia and heights at the same time. 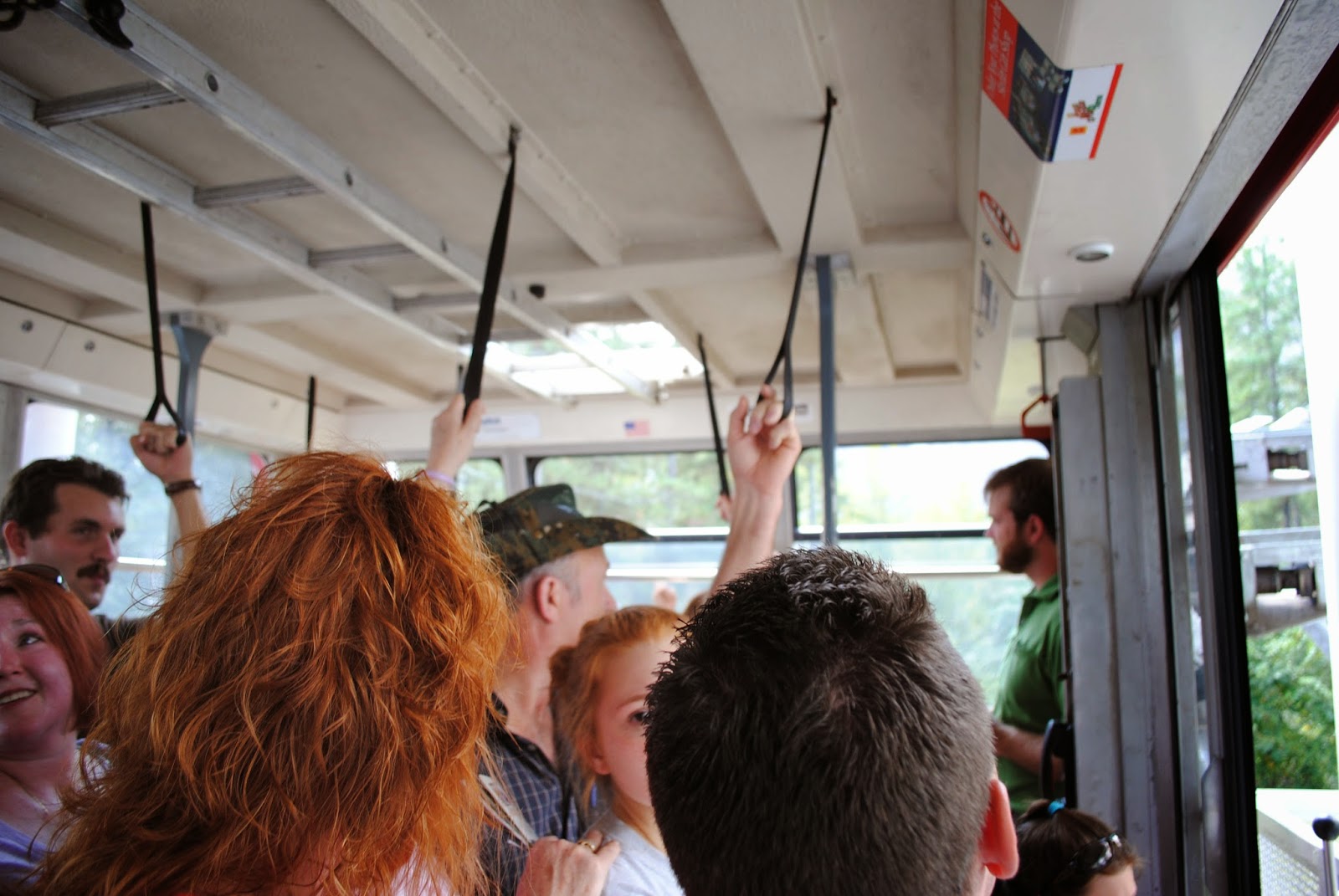 Despite this, you do get an impressive, yet brief close up view of the sculpture. 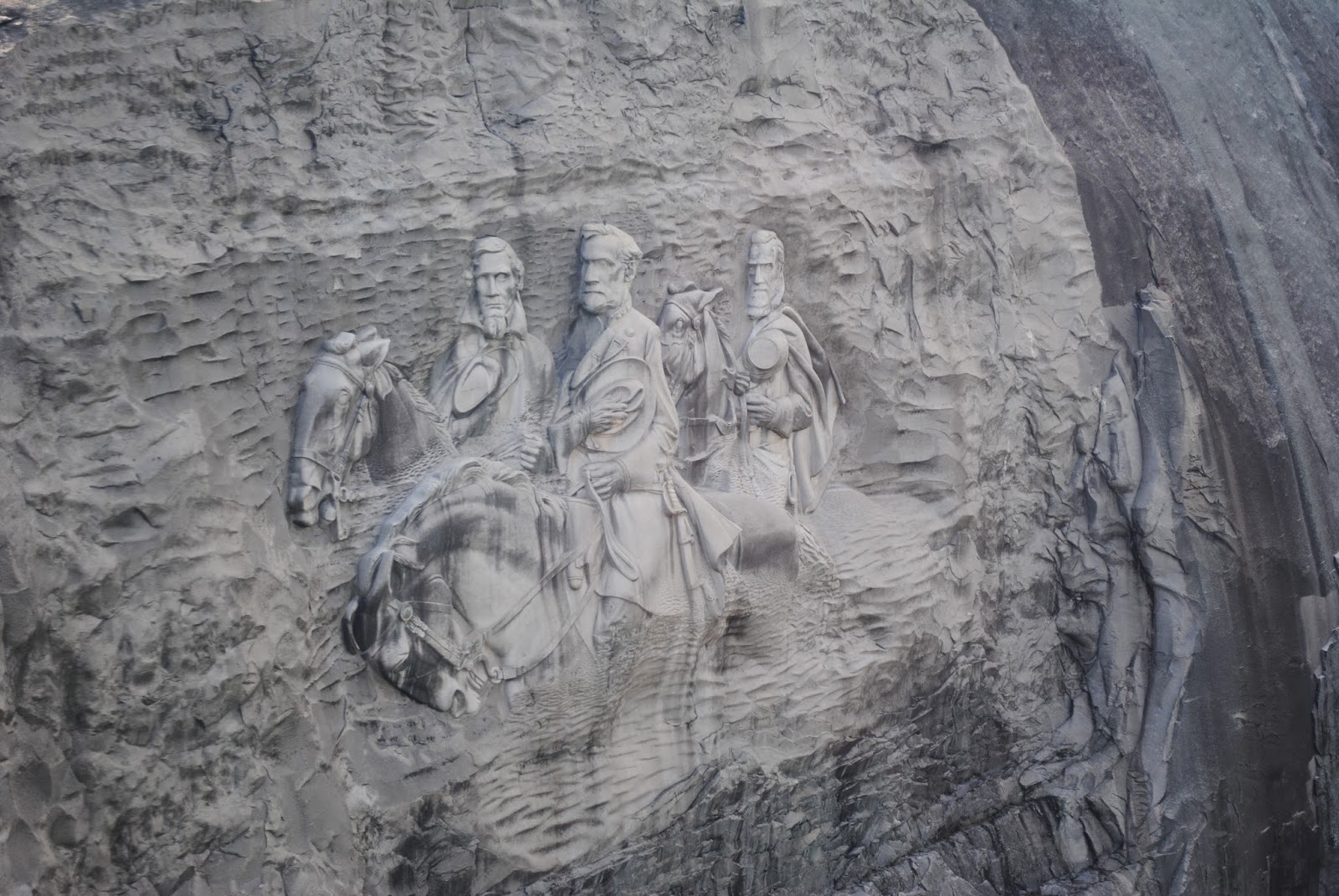 It is difficult to actually gauge how big the sculpture is because of a lack of a reference point, even in person.  However, it is freaking huge, actually bigger then Rushmore.  Two school buses can actually be parked on the ass of "Traveller", Robert E Lee's Horse.  I have created this image to give some context to the size. 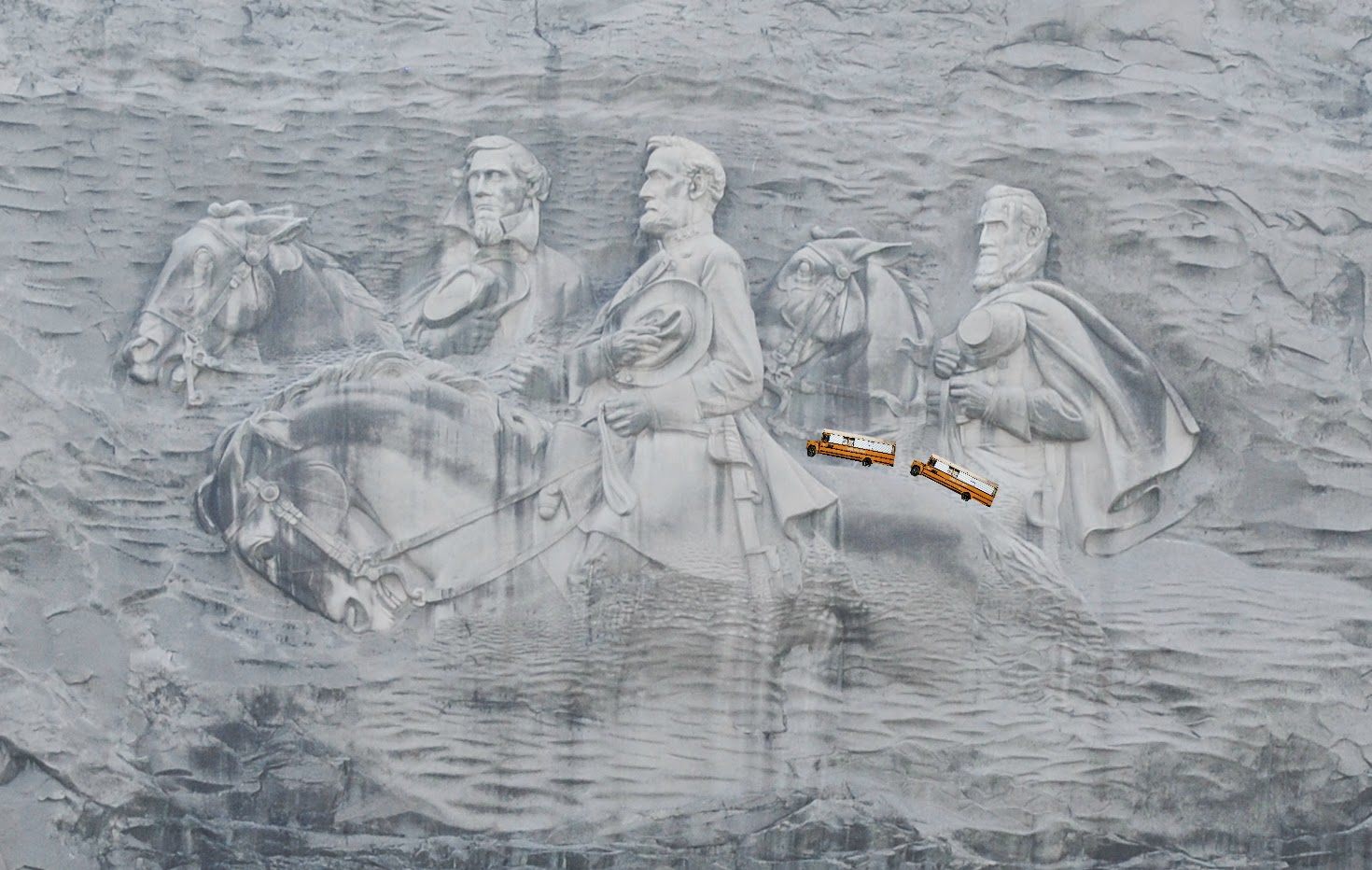 Now, that is one big horse's ass.

The view at the top of the Mountain is pretty magnificent.

You can actually see the Atlanta skyline.

Since I am a cheap skate, I decided to save myself the fare of going down the cable care and just walked down the Mountain.  It was one of the most unusual hikes ever.  It is a mile to the bottom.  The ground is solid stone and it is so steep you have to do a goofy slanty walk to keep from falling over.  At a few points I felt like I was going to slip and roll down Stone Mountain.

There is some odd vandalism carved into the rock as well. 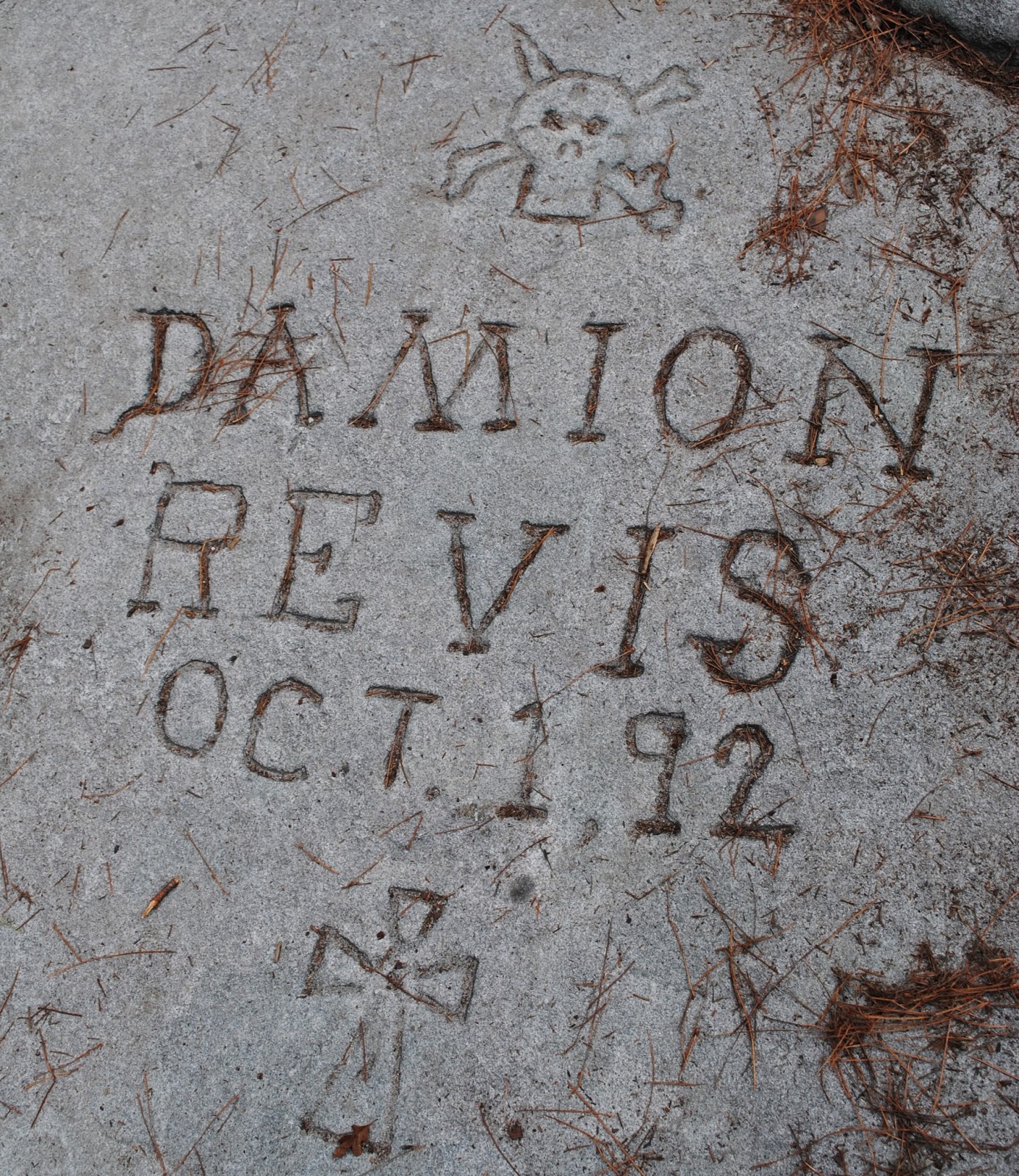 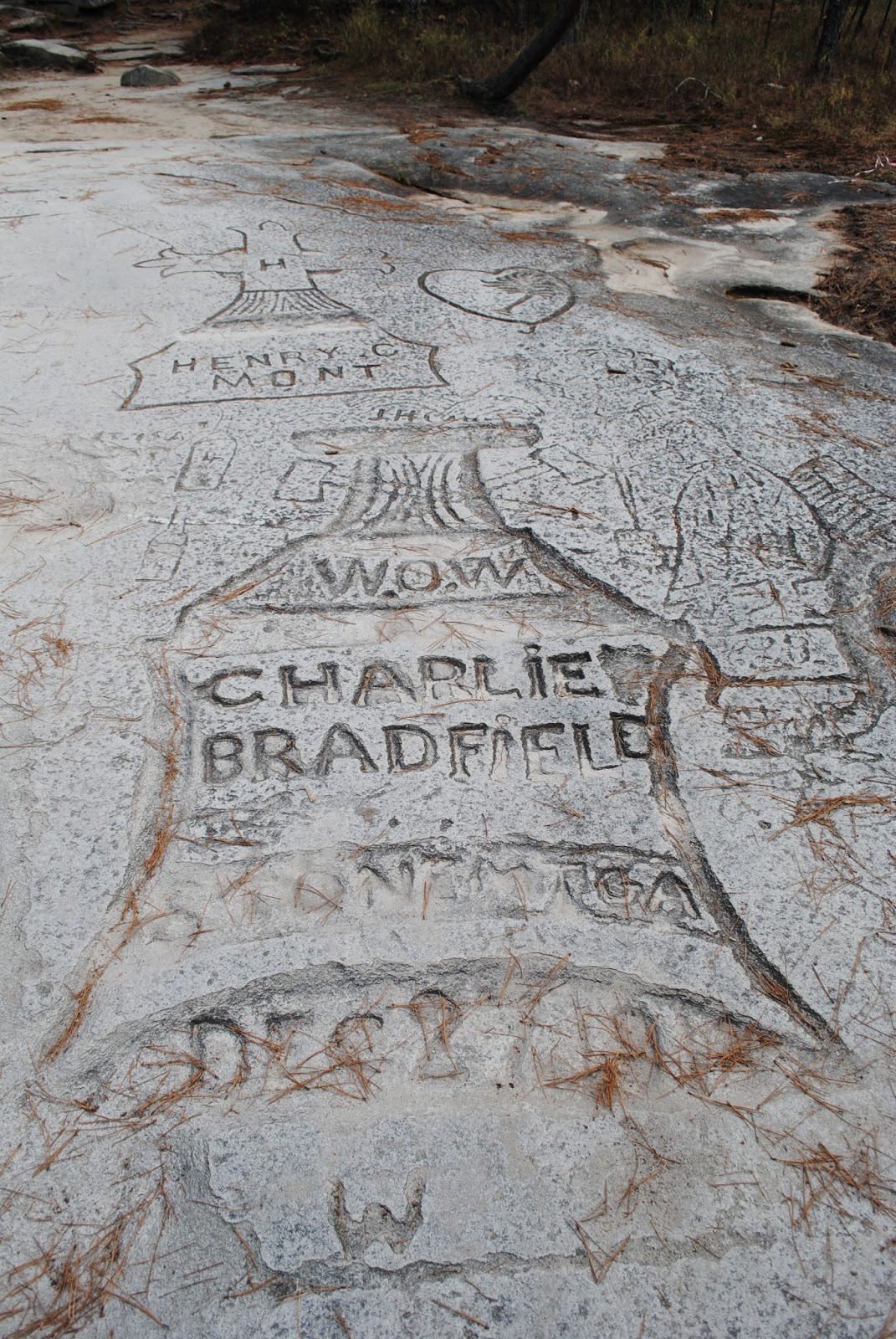 Regardless of its checkered pass, Stone Mountain is still an iconic and remarkable part of the southern landscape.

Please feel free to email me at jacobthecarpetbagger@gmail.com
And don't forget to check out my Flickr Photostream and my Youtube Page
Posted by Jacob at 8:13 PM