The Strangest Things You Can Find in New Orleans' Cemetaries

New Orleans has got to be one of my favorite cities in the entire world.  No one place on earth weaves having a good time with the macabre so splendidly.  There is simply no place like it on earth.  One of the many slices in the wonderful pie that is New Orleans is it's Cemeteries. 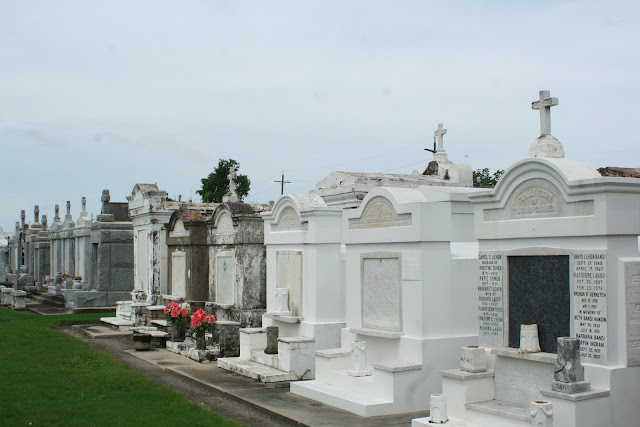 As the water level in New Orleans is so dangerously high, bodies simply cannot be put in the ground.  If they were it would make everyday in New Orleans look like the final scene in Poltergeist.

In New Orleans they use the style of crypt you see above.  You may think that they look very expensive for a one person crypt.  Well, you would be right, because these are not for just one person.  These are family crypts.

The crypt functions like a ghastly pizza oven.  A dead body is placed on a ledge inside the crypt.  There bodies are left inside for at least one year and one day (it is illegal to open a crypt sooner then that).  The body cooks in the hot sun of New Orleans and decomposes.  When it is time to bury the next family member the last one has broken down into a skeleton.  The skeleton is pushed to the back and drops down into a pile of family bones.  There is no telling how many different people compose the bone pile in the back.  If a family needs to bury more then one body in a year's time they must rent a temporary crypt to cook their skeleton for a year.

These cemeteries are as beautiful as they are creepy.  I'd like to share some of the wonderfully weird and creepy things I have had the chance to see when I was in New Orleans. 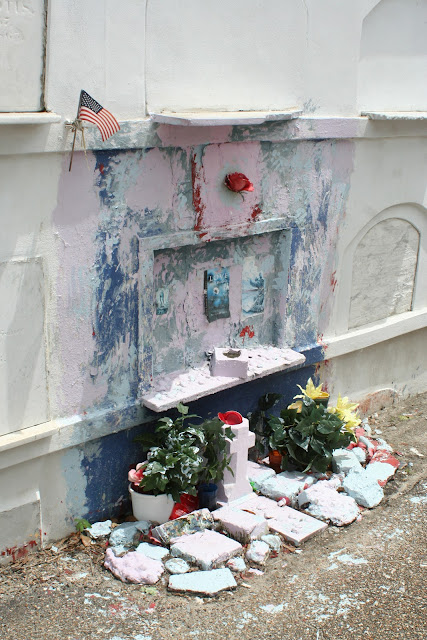 I don't have a whole bunch of information on this one.  All I know is that this hand painted crypt sits on a plain white wall.  Apparently, there is a woman buried here and her son walks to the cemetery and decorates her grave regularly.  Its a touching tribute. 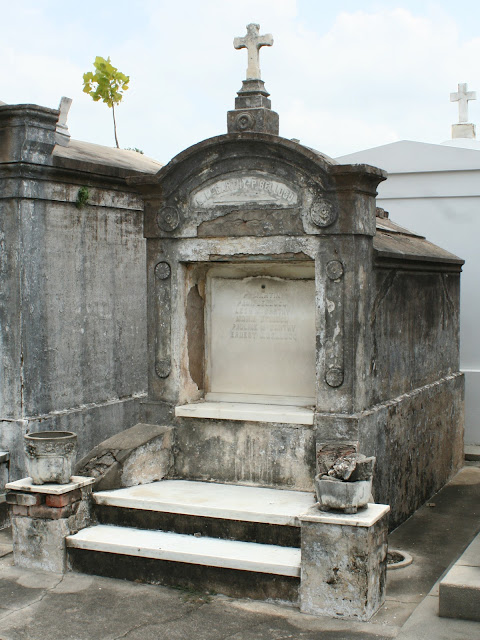 Inside this family crypt lies the body of E.J. Bellocq. 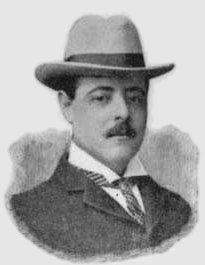 Bellocq was a photographer from a French family born in New Orleans in 1873.  Bellocq made a living photographing various buildings and landmarks around New Orleans, but the photos in his personal collection were much more dark and fascinating.

After his death in 1949 it was found that he had a personal collection of photographs of woman that he did not share with anyone.  These photographs were of prostitutes from the red light district in New Orleans pleasantly named "Storyville".

These photos are hauntingly beautiful. 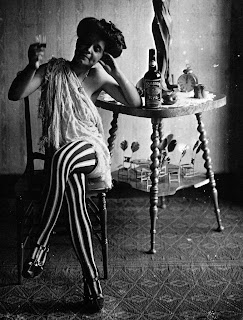 But they also contain a dark mystery.  Many of the woman in the photos are nude, and many of the nudes have their faces scratched out of the photograph.  Other woman wear creepy masks. There is no official explanation of why this was done.

3. The Many Graves of Marie Laveau-St. Louis Cemetery No. 1 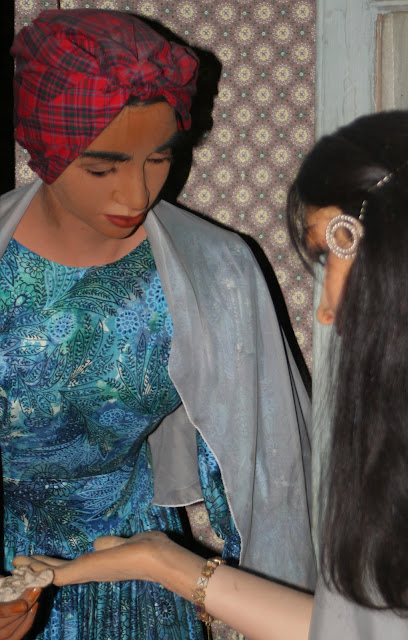 Anyone who has visited New Orleans knows that there is one folk figure that towers above all others: The Voodoo Queen Marie Laveau.

It is difficult to sort fact from fiction when talking about Laveau.  What is know was that she was a prominent Voodoo practitioner in the early 1800s and she still has a large following to this day.  Marie was said to mix roman catholic believes with African voodoo.  However, Marie also worked as a hairdresser and there is strong speculation that her powers of precognition may have simply linked to her ability to gather gossip.

Even harder then separating truth from fiction with Laveau is finding out where she is buried.

Popular belief is that Laveau is buried in St. Louis Cemetary No. 1, however there is a dispute over which crypt she is buried in.  There are three separate crypts which people argue that Marie is buried in. 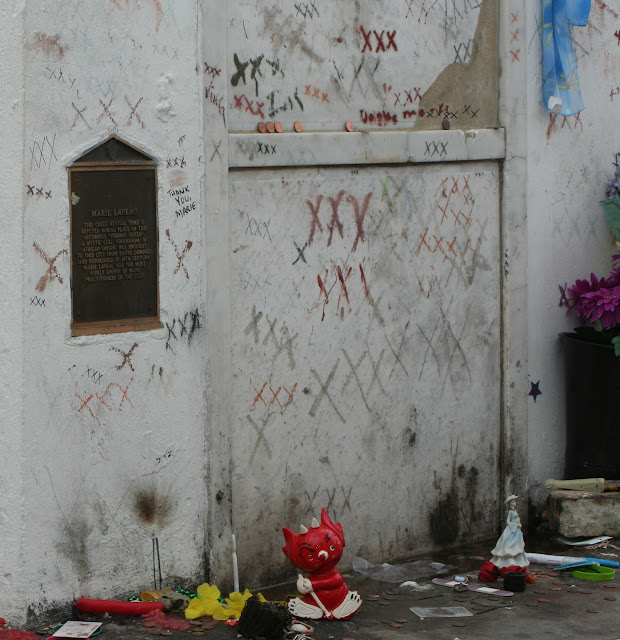 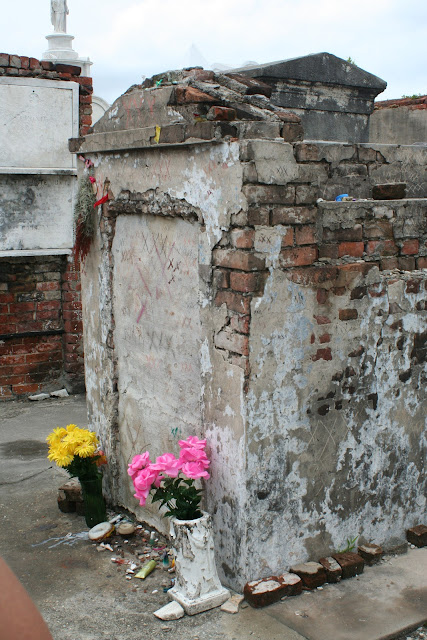 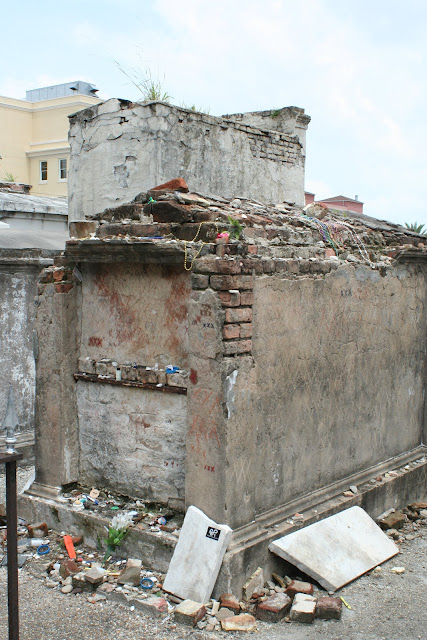 Of course to make things even more muddy the tour guide explicitly stated that Laveau was NOT buried in St. Louis No. 1.  Apparently, this is was the sort of tour where they don't tolerate any nonsense.

You may notice that the three graves are covered with a marking of three "X"s.  Supposedly, this mark along with a monetary offering is supposed to be able to summon Leveau and ask her for favors.  I guess its best to hit up all three graves just to be safe.

Our tour guide also did not approve of this behavior. 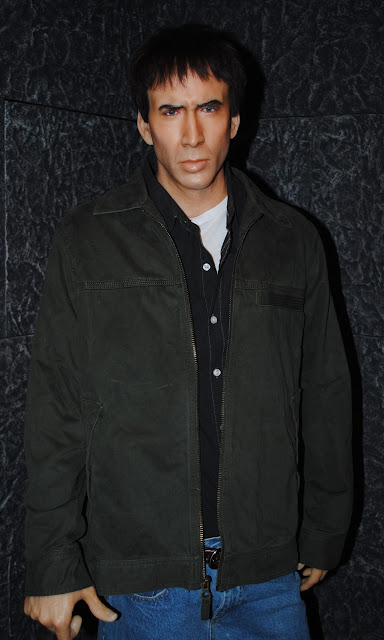 No you didn't miss the death of Nicholas Cage.  He is still alive and well, but he has his grave waiting for him in New Orleans.

One thing that you may notice while visiting New Orleans is that for some reason everyone really, really hates Nicholas Cage.  While this level of dislike may seem confusing at first, but it is apparently linked to Nicholas Cage's obsession with the city.  Cage had a habit of buying up historical places for his own amusement.  This would contribute to Cage going completely broke.

Oh yeah, and Cage also built himself a giant hideous grave in the middle of New Orleans' oldest and most historical cemetary. 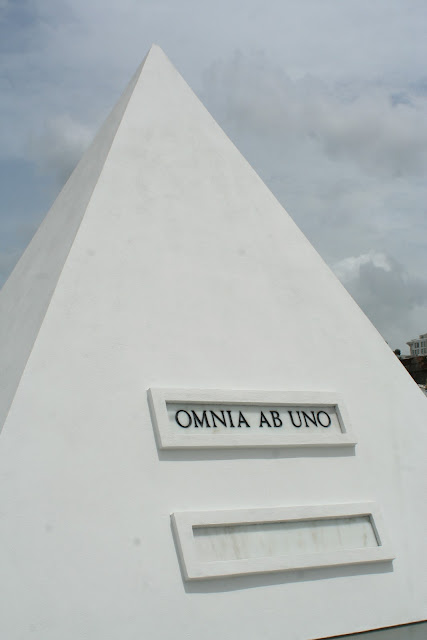 Amongst the beautiful historic graves in the cemetery is this giant towering pyramid that will one day hold the corpse of Mr. Nicholas Cage. 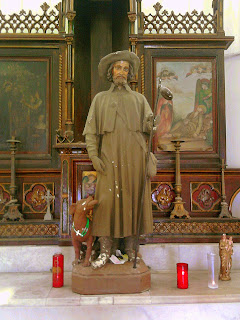 This is St. Roch.  I'm not Catholic and I don't exactly understand how the saintification process works, but for whatever reason Roch is the patron Saint of Dogs and Knees.

Being the Patron St. of Knees carries great responsibility, which can be seen first hand in the Cathedral of St. Roch. 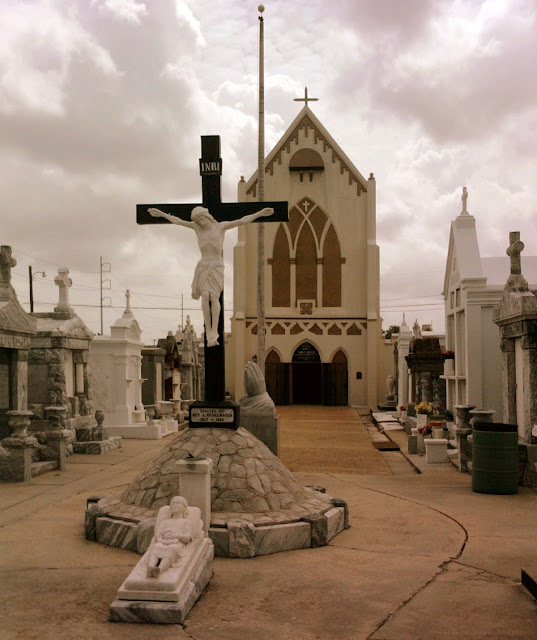 The customary offering for St. Roch is to leave prosthetic limbs, crutches and leg brace.  The cathedral if full of all of the above. 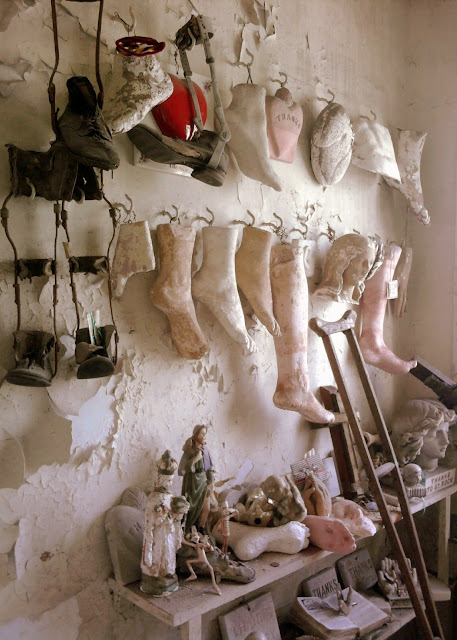